If you too savor the tingle on your skin as you enter an enchanted glen, if you relish feeling the power of Rancor or the delight of an Argothian Enchantress's song, then you must've been waiting too long already to play your favorite card type in multiplayer: enchantment. In Oathbreaker, a deck size of fifty-eight cards (plus a locket of two) allows more concentration of your favorites in a distinct strategy. In your command zone, a Planeswalker and their signature spell are each taxed individually. You can cast the instant or sorcery as long as the Planeswalker is on the battlefield.

We will begin with a locket designed to protect creatures glowing with auras. It includes a few infamous hexproof creatures, such as Gladecover Scout, but the signature spell of Karametra's Blessing allows you to have an Enchanted Evening, figuratively speaking, with powerful creatures like the new Setessan Champion. If you want more enchantresses, fewer auras, and a global sparkle, you'll find a second decklist later in the article.

Of all the potent creatures in this decklist, Rabid Wombat may be the most wonderful. Not only do you get to terrorize the table with a frothing quadrupedal marsupial, but the little menace also blocks for you with vigilance. In a multiplayer format where everyone needs to both attack opposing Planeswalkers before they ultimate while simultaneously defend your own, vigilance is one of the most valuable keywords. I've prioritized creatures and enchantments with it. Observant Alseid was a late cut, and if you don't want to play with any of the above cards, do consider that enchantment creature.

In Oathbreaker, everyone starts at twenty life, and killing foes outright with Rabid Wombat can and will happen. The format is faster than Commander, and you don't need too much more value or card draw than what you can already glean from Calix, Destiny's Hand. That's why I didn't include Season of Growth. I also excluded Heliod's Pilgrim, simply because I worried about Daybreak Coronet becoming a monotony rather than a glorious topdeck. You may feel differently.

We're trying a few new cards for fun. Karametra's Blessing is only sometimes better than Blossoming Defense. In select playgroups, Veil of Summer would be the superior signature spell. Though it's popular in Commander, Heroic Intervention is too cumbersome for our purposes at double the mana. Within the deck you'll find Mantle of the Wolf, but after dancing with enough wolves I might replace it with Griffin Guide or Angelic Gift. Our creatures are powerful enough that they are more interested in evasion than stat buffs. Why, I didn't even feel that the old workhorse of Empyrial Armor was necessary.

Speaking of strong creatures, Setessan Champion and Kor Spiritdancer don't require you target them for the card draw. The human gets full bonuses even if you enchant another creature, such as the slippery Silhana Ledgewalker.

One last card of note is Retether. Yes, it's strictly worse than Replenish, even in an auras deck, except in terms of price. If you own a Replenish, feel free to play it. If not, no need to go rabid. The same is true for this next deck. If you don't have a Replenish, simply play Faith's Shield as your signature spell. It's great, able to protect your Planeswalker or other permanents. The only reason we're not playing it in the auras deck is because it could cause all your White enchantments to slough off, if your opponent targets the creature you want to protect with a Swords to Plowshares.

This deck is glutted with enchantresses. So many that I couldn't find space for two of them: Mesa Enchantress and Verduran Enchantress. Again, I don't think you need them since your Oathbreaker already draws you cards. He also can search for specific enchantments, so this deck plays more aces like Stony Silence. 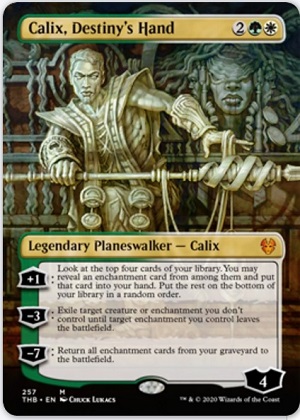 Yes, you could include Elspeth Conquers Death in our enchantment deck. It slays opposing Planeswalkers then makes them harder to recast. But it's even better in last month's Elspeth Tirel deck. Bringing her back with +1 loyalty means she can ultimate, clearing the battlefield of all but her noble tokens.

I've played Enchantress in Legacy, and in that format you're looking to establish the lock of Argothian Enchantress and Solitary Confinement. Unfortunately (or fortunately), that's less good in Oathbreaker because your Planeswalker isn't protected. Cards like Elephant Grass and Ghostly Prison also go down in value. Instead we can protect ourselves with political cards like Vow of Duty and Vow of Wildness.

If your playgroup is more cutthroat, you should consider leaving out the vows and instead playing Nevermore and Gideon's Intervention. They can shut down entire strategies, blocking an Oathbreaker from being cast along with their signature spell. I also excluded some of the more potent auras, like Song of the Dryads, for the sake of deck diversity.

Like the pricy Replenish, if you own Academy Rector and or Serra's Sanctum, feel free to play them. Greater Auramancy is also pricy, but with Replenish as a signature spell I don't think it's necessary. The same is true for Privileged Position. We have multiple win conditions and don't need to protect any specific one. Of course there's also the powerful Moat. Be aware that it won't save you from an opposing Planeswalker who ultimates. In Oathbreaker, it pays to be proactive. If you love playing more defensive cards like Moat, also include more enchantments like Oblivion Ring to tell 'Walkers to keep walking.

Last and, sadly, least, let's talk about card flavor. You may wonder about the lore behind Calix, Destiny's Hand. I would suggest don't. Simply do not inquire, beyond what you can read on Relentless Pursuit.