Sarkhan has one of the most brilliant character arcs in Magic. He begins as a dragon fanboi, becomes enslaved to the dragon Nicol Bolas, frees himself, helps defeat Bolas, and starts his own dragon family. I've written about Sarkhan before in a Mono-Red Oathbreaker deck. This week, his character is becoming even more colorful. 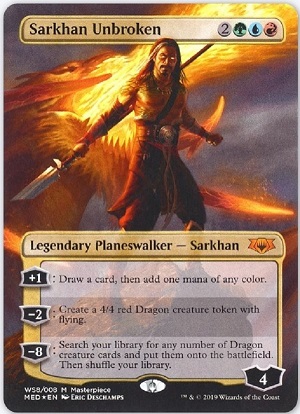 Free and soaring, Sarkhan Unbroken has just altered the timeline of Tarkir. Dragons are no longer extinct. Ugin is no longer dead, and together they take the first steps to defeating Sarkhan's tyrant master, Bolas. As a young man on Tarkir, Sarkhan dreamed of dragons. In the new casual format of Oathbreaker, you can at last realize those dreams with a draconic signature spell.

If Sarkhan Unbroken is on the battlefield, you can cast his signature spell. It's taxed two colorless more each subsequent time, but we only want to cast it once with overload, turning our unassuming creatures into mighty Dragons and winning the game in one fell swoop.

I started designing an Oathbreaker deck in Ketria Triome colors, with Mythos of Illuna. You could certainly play the rare sorcery with Sarkhan Unbroken, but I realized we could do something far more flavorful and - most importantly in casual Magic - fun.

Dragonshift not only turns your creatures into flying Dragons, it also strips away their other abilities. I realized this would allow you to attack with creatures that normally have defender. Not only is this hilarious, but walls have political power in Oathbreaker. Better than destroying an opponent's creature with Doom Blade, discourage it from attacking you with Wall of Tears. You don't expend a card, and your opponents are more likely to serve you by attacking each other. Casual is all about having fun, and it's no fun for them to run attackers into your walls.

Safe behind your battlements, you can make land drops and accrue advantage with Sarkhan Unbroken. When the time is right, win outright with your signature spell or another of the deck's payoffs.

The only problem with Descent of the Dragons is that your newly created scaled beauties can be killed in a Wrath of God before the turns cycle back to you. Your winged victory is surer with Temur Ascendancy. You could play more haste enablers, along with Day of the Dragons, but haste doesn't help your primary win-con of Dragonshift. We'll explore more options at the end of the article, but for now I would like to point out a card that does synergize with our signature spell.

Yes, Sarkhan would love that dragon. He would marvel at how its muscles ripple beneath its scales, how it defied gravity with its strength. And whenever you resolve an overloaded Dragonshift and fill the sky with firebreathers, a tear would come to his eye.

Our deck includes a few other creatures, and they're all adorable. The iconic Dragon Egg can end up becoming a Dragon even if it never hatches. I also included Sarkhan's Whelp as proof of how much he loves dragons. And I can't blame him. Slumbering Dragon has long been a pet card of mine, and I wouldn't feel ashamed playing it here. Whether or not it discourages attackers, it will become a huge threat when you Dragonshift it. Those +1/+1 counters increase its base power and toughness.

You certainly could build this deck with a greater emphasis on token strategies. I included Nissa, Voice of Zendikar, but not too many other token generators. Instead I leaned into defender synergies. Not only are they strong, but c'mon! Moat Piranhas is just good times.

I designed this deck to be budget. Veil of Summer is one of the most expensive cards in it. I avoided such costly Commander staples as Wall of Kelp. The good news is you don't need that seaweed to win, but if cost is no barrier, dive in. We'll close out this article with a version of the deck that spares no expense. It also is sneakier. Dragonshift is great, but there's nothing subtle about it. Your game plan is entirely face up. A more defensive signature spell would likely be more appropriate for more competitive playgroups.

In this version I reduced the defender synergies and included more value creatures such as Wood Elves and Eternal Witness. The bodies they leave behind become Dragon-sized in this deck. This isn't necessarily stronger than playing more Walls; I merely wanted to illustrate your options. And you should make your card selection in casual formats not merely because of their perceived strength but because of how happy they make you feel. And there's no better feeling than turning dorks into Dragons.