Liliana is the perfect Planeswalker for the new format of Oathbreaker. She would be the first to break her oath, the first to leave the Gatewatch and its fools. True, they were useful for defeating her demons, but good help isn't hard to find, if you dig it up.

True friends can never betray you. That's why Liliana prefers the feel of cold flesh against her skin. The undead never lie, and they never lie in their crypts for long with Liliana around.

Once your graveyard is full with a trove of undead, cast your signature spell. Songs of the Damned will power out one of your payoffs or simply bring back every zombie to build your own personal army.

The sight of Josu Vess shouldn't cause you pain. Yes, Liliana did damn him with dark magic to eternal undeath and torment, but that was only in an effort to save his life. If she had followed the rules and been too scared to do the forbidden, he would've died anyway. And if she hadn't trusted the Raven Man, she may have succeeded.

Liliana will never make the same mistake again. Put your faith only in death. And if you feel a cold sharpness in your heart whenever you see the living together, laughing, confiding, what you're feeling isn't bitter regret. No, it's merely anger that you too were once so weak.

As far as card selection, you may wonder why the above list excludes so many powerful cards. Non-creature spells would slow the buildup of your graveyard. Many of the best zombies, including the lords, cost three mana, causing a bottleneck. I listed zombies you may not have considered. Gravecrawler is arguably the best, but I've come to find it monotonous. If you have a personal favorite undead minion, do include it. The deck has a minor sacrifice theme. Remember, fools sacrifice themselves for others. The great sacrifice others for themselves.

Do your dark dreams include casting Liliana's Triumph over and over as a signature spell? Do you wish to give players the cold shoulder with a deck filled with twenty Snow-Covered Swamps? Then you would be wrong not to Succumb to Temptation.

Most people do nothing with their lives. Why not take it? Drain Life and other X spells can finish a Planeswalker before they ultimate, or better yet, the controlling player. Cards like Black Cat and Arisen Gorgon may seem less powerful, but these sorts of scarecrows will frighten foes from attacking you and goad them into attacking each other. To that end, I would even consider playing Snuff Out as my signature spell. It's free the first time you cast it, and having it face up makes it even more powerful, as I discussed last week. 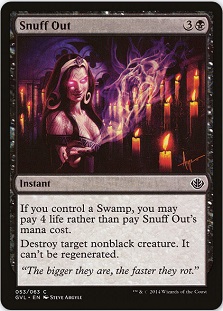 True, a signature spell that you can play over and over to keep your foes weak is strong. Liliana's Triumph is just that. And if the other players complain and simper at your power, remember that only their cowardice prevented them playing stronger cards themselves. Morality is a lie perpetrated by the meek. Don't settle for a small life when you can live luxuriantly forever. 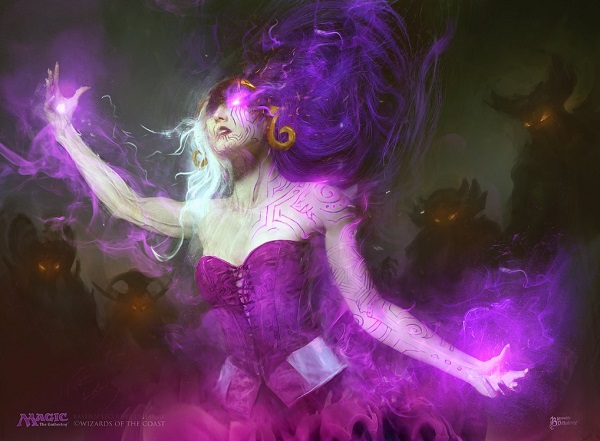 To stave off decay and death, Liliana sold her soul to four demons. From her perspective, it was more of a loan. Never one to accept her lot, Liliana hunted down her four masters, slew them, and reclaimed her power. In this last deck you can do the same. It's themed around Liliana's Contract, which you can find every game if you so desire. Whether you do or not, you can bury your demons alive then reanimate them all in one fell swoop.

Liliana Vess is the kind of girl that demons warn their spawn about. If her story thrills you, this deck may bring you the most cackling glee. Chuckle as you Entomb the legendary demons that thought they could control Liliana. Laugh as you tutor Entreat the Dead to the top of your library. If that's wicked, then I don't want to be good.

This deck features all four of Liliana's demons, even Griselbrand. Yes, reanimating a 7/7 lifelinker that draws you seven cards is strong in Oathbreaker. That's probably why it's banned. WeirdCards.org fears its power. The most Liliana thing to do is break their rules and play Griselbrand anyway. If there's one deck that deserves to play him, it's this one. But if you wish, you may ask permission first from your playgroup, and if they say no, you can swap in Rune-Scarred Demon.

Next week we'll wander even further from the so-called civilized into even more tantalizing secrets, with Liliana decks featuring discard and The Chain Veil. Let me know if there are any cards or combos you would like to see, without apology. 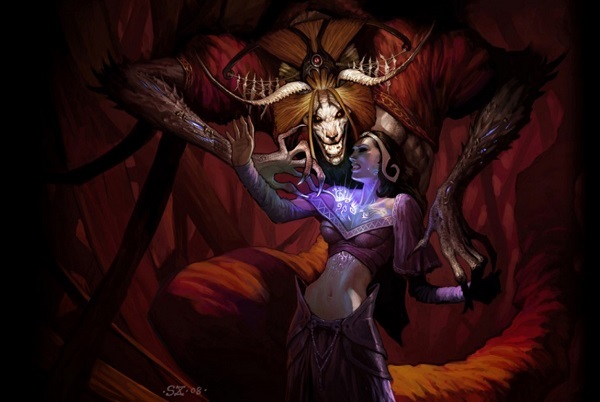