Jumpstart may well be the best Magic product in a decade. It introduces a new, faster way to play the game with your friends. A box can be opened and enjoyed in one sitting much like a board game. Simply take two Jumpstart packs at random, shuffle them together, and draw seven.

And if it is as good a game as we think, why not expand it? I'm building four new packs a week, to extend our enjoyment of Jumpstart with a greater variety of themes and colors. The original product contained many great flavors. My favorite is Witches, and not only because I'm a fan of the musical Wicked. The pack practically bubbled with synergy, such as Bogbrew Witch and Festering Newt.

But if Witches was my favorite pack, the Red Spellcasting ones were my least. They included too many creatures, sometimes as many as eight, and too few spells. Shuffling them with a random pack further lowered the percentage of instants of sorceries. We were left with a Spellcasting deck without spells, only a constant feeling of disappointment.

I've combined old favorites with new cards and built two of my own Prowess packs. They push non-creature spell count to the limit, including a few double-faced lands from Zendikar Rising.

This pack includes only four creatures, and Rimrock Knight has an adventure spell. Still, I'm not worried about lacking ways to close out the game. First, we'll have whatever creatures are in our other pack. Second, we have non-creature spells that create tokens.

Goblin Wizardry is the perfect card for Limited prowess. Not only does it give you a non-creature trigger, but it also creates two tokens that further love spells. Let's get this party started, in the library, with fire.

Speaking of burn, I included Direct Current for repeated damage and Orcish Cannonade for velocity. Bigger creatures we can stop from blocking with Blindblast or even Song-Mad Treachery. That can clear the way for a blazing Kiln Fiend or Dragon-Style Twins.

The next pack cares more about blocking. We'll keep rummaging to cast more and more spells and win through card advantage or a few big hits with Erratic Cyclops.

Like Goblin Wizardry, Dance with Devils, and Flurry of Horns provide creatures without diluting your sweet spell smoothie. Again, one of the few creatures we do play, Merchant of the Vale, comes with a spell adventure. Yes, we have some mainstays like Burning Prophet and Thermo-Alchemist, along with Throes of Chaos as our spicy tamale.

Looking over the list, I worry I made this pack too strong. But that's not as important in a casual format as fun. And it's impossible to be too fun, so I think we'll be fine.

One fun element of Jumpstart is choosing the land to pair with your pack. The Mountain from the original pack would be ideal, but as those so rare, I would rely on the new electrifying land from Zendikar Rising. 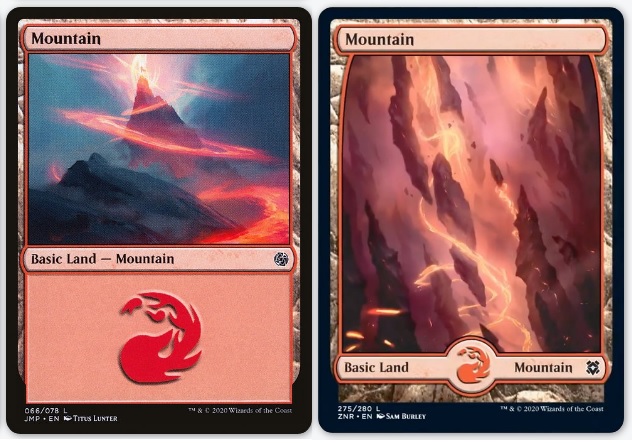 Now that I've gotten the Red out of my system, we can create Jumpstart packs for other colors. It's good to diversify our play experience and represent the full pie, even if clearly Red exemplifies Magic's best: courage, action, and love. Not to mention fire.

Ok, ok, you convinced me. Just one more Red pack for this week, but I swear this will be the last.

The original Jumpstart box included four packs of Green dinosaurs. I wrote previously about a White pack of dinos, where toughness matters. I'm rounding out the spectrum of prehistoric beasties. Nothing is more fun than imagining humans flourishing alongside giant herbivores, like we see in Tilonalli's Knight and Otepec Huntmaster. I also enjoy the flavor of how Thrash of Raptors gets hungrier with other dinos present, while Stampeding Horncrest gets scared and hasty.

Rather than a rare I added a fifth mythic uncommon, Charging Monstrosaur. If you don't think that's good enough, you could always swap Wild Slash for Crater's Claws. You could also replace any of the removal spells with Dinosaur Stampede. Whatever you do, pair Red dinosaurs with Ixalan lands.

Now that I've gotten Red Dinos out of my system, I can create our last pack for another color. To write about a fourth Red pack in a row would demonstrate an extreme lack of control, confirming every snooty Blue mage's concerns about fire mages.

No, my impulse control isn't a problem. I know I said I wouldn't write about four Red packs in a row, but you see the thing is, my article next week will feature the rest of the sliver spectrum. Why not finish up with Red today and a matching pack? For a royal flush, if you will.

What? You can't expect me not to make Jumpstart packs for my favorite tribe. It's a wonder I've restrained myself this long. Among such slithery beauties as Blur Sliver and Bladeback Sliver, I added a few sneaky spells with changeling. Fire-Belly Changeling with gain all sliver bonuses along with any other tribal synergies from your other pack. Blades of Velis Vel will welcome creatures from your other pack to the joyful clicking of the Hive. Since two slivers grant first strike, this will often be as good as a double combat trick or better.

Naturally, I wanted to maximize the sliver count while still interacting. That meant playing Thorncaster Sliver and Hunter Sliver. I love the idea of our multi-tailed good boys tracking down our opponents' creatures and ambushing them with the help of Striking Sliver and Bonesplitter Sliver.

You may have noticed a rules text variation between these two slivers. We'll discuss that more next week. Let's finish out today with a last mention of lands. You could pair Slivers with Mountain cards from Time Spiral, if you like the idea of your beaked boys rifting there from different ages and planes. Personally, I prefer my lands express the joy I feel for sliver synergy, so I would choose some wonders from Mark Poole and Rebecca Guay. 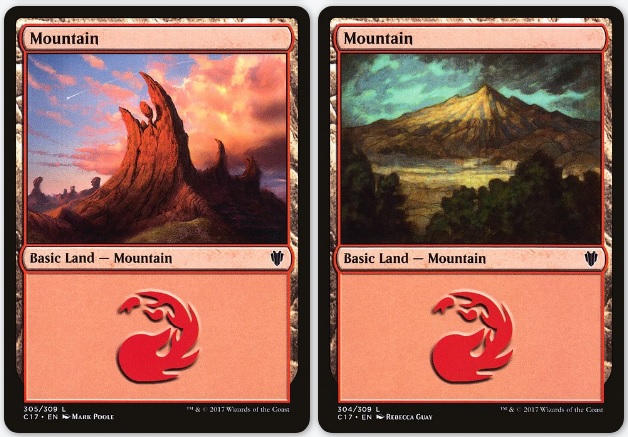