Last week we all heard a resounding crackle as the community opened the first Mystery Boosters. We learned they were designed for Chaos Draft, and those opened at premium events contain zany play-test cards such as Banding Sliver, Aggressive Crag, and Kaya, Ghost Haunter. 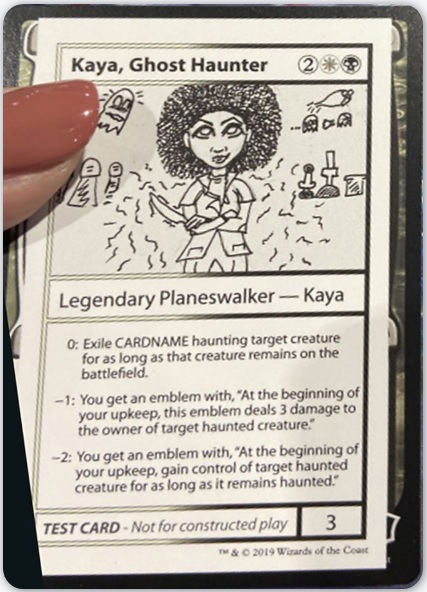 Like the original Kaya, Ghost Assassin, she isn't inclined to gain loyalty for you. This mercenary is here to do a single job, and that job is to give ghosts a taste of their own spooky medicine. The first few turns she sets up emblems like booby-traps in Home Alone. Then she goes spectral neon to scare a creature into hurting its master or even betraying them.

Those are fun mechanics on an original Planeswalker design. It is awkward that Kaya has to exile herself in order to haunt something. Ah, well. 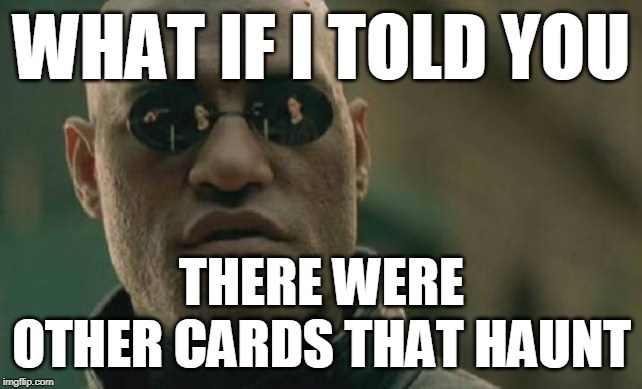 Oh, that's right! Haunt was a game mechanic in Guildpact in the first Ravnica Block. It was also the most confusing and forgettable one of the ten guilds' and arguably ever designed. People make fun of banding, but that just let you attack or block with your creatures in a single unit and redistribute combat damage favorably. Haunt, now that's a mechanic that made people shudder.

Like a team of intrepid ghost hunters, we'll collect many examples of haunting and place them into a single deck. While multiple play-test cards from the Mystery Boosters could be made into silly commanders, in Oathbreaker we can design a deck around Kaya herself. In this new multiplayer format, everyone starts with twenty life and two cards in their command zone: a Planeswalker and their signature spell. Before we look at the decklist, let's go on a ghost tour of the mechanic haunt.

First, your spell with haunt resolves. In this case it's a creature with an ETB effect. If your Blind Hunter dies, its eyeless ghost will now flap its way over to another creature. People would often haunt their own creatures, but alongside Kaya we'll choose one of our opponents'. Now our exiled bat is haunting their creature like an aura that doesn't do anything, until the haunted creature dies. Then the haunting is complete, and the spell effect recurs, which is the ETB life drain.

Haunt was confusing for a few reasons. First, it appeared on both creature and non-creature spells. Second, haunting your own creatures was counter-intuitive and often the right play in the past because you had more control over when they died. And third, haunting another creature didn't do anything until that creature died, which also didn't make much sense. If I were being haunted, wouldn't I act differently? I might run around the house screaming, knocking things over and doing myself harm. I might even be possessed by the haunting and turn against those I once loved.

The emblems of Kaya, Ghost Haunter do just that. Haunted creatures now deal damage to their masters as they run screaming down the halls. And her minus-two ability can possess the haunted fully. If you would like a powerful and competitive Oathbreaker deck, read last week's article. If you would like to experience a ghost of Magic's past in a new and more flavorful way and chill your foes with a mechanic they didn't believe was real, then sleeve up this deck.

Sleeving up the play-test card of Kaya, Ghost Haunter for a game of multiplayer is all in good fun, and that's what matters in casual formats. If you want to push the rules further, you could play Benediction of Moons as your signature spell. It has a reasonable effect for its cost and can serve as a way to always have a creature to haunt.

Unfortunately, haunt doesn't strictly work within the rules. Signature spells return to the command zone immediately and cannot exist in any other zone. This also prevents you from optimally using signature spells with flashback. I don't like this rule myself, and I don't see a problem with breaking it as long as I'm not trying to end the game with a combo. However, I designed the above list abiding by that particular rule. You can both search out the cards you need with Diabolic Intent and sacrifice creatures to get your haunt on. A budget option would be Altar's Reap.

The great thing about playing Orzhov in Oathbreaker is that you can kill any problematic permanent you want with cards like Anguished Unmaking and Vindicate, especially opposing Planeswalkers. I even included Aether Snap as a board wipe for Planeswalkers. Just be certain to exile Kaya, Ghost Haunter first with her first ability.

We don't want the creatures we've haunted to die so much as stop attacking us, so I'm playing Wall of Souls and other pillow-fort cards to discourage aggression. Creatures with the haunt ability also serve as deterrent, as killing them allows them to haunt. You can keep an opponent's haunted creature in play indefinitely with Darksteel Mutation. Before we move on, let's appreciate a tiny metal beetle scurrying around in a panic room to room, chased by ghosts. Poor little critter. I kind feel sorry for it.

Kaya never feels sorry for the ghosts she hunts. She sees them as loafers at best. If they had any sense of decorum, the dead would've moved on to the afterlife. She can shift her daggers and herself into the realm of the incorporeal and stab a ghost. There are all too many trespassing apparitions across the Multiverse. She doesn't have time to track them all down, only the ones people pay her to assassinate, such as Brago, King Eternal from Conspiracy's plane of Fiora.

Like other famous mercenaries, Kaya owes a debt. In the War of the Spark we learn her home plane is facing environmental disaster, something we can all relate to. Her sky is fracturing, and Nicol Bolas promised her to fix it, for a price. That's why she slew the Ghost Council in Kaya's Wrath for him and became Kaya, Orzhov Usurper.

Only that variant of Kaya has plus loyalty abilities. Her other cards do not, but there are other ways to increase Planeswalker loyalty: The Elderspell, Kaya's Ghostform, and Grateful Apparition. The last two even have her in the card art.

Speaking of The Elderspell, if you cast Diabolic Intent, your opponents may assume you're searching for the all-powerful sorcery and coordinate an attack against you. If you're searching up a silly card with haunt, feel free to reveal it. You may reveal cards in your hand at any time. This will deescalate.

The overall strategy of this deck is to fade into the background, like a spook slipping into a wall. While other players are battling, you're not doing much besides haunting creatures and maybe dealing a few damage a turn. As you accumulate more emblems, your silly hauntings will become downright scary. Then you can start taking control of creatures or killing players outright. You may even have the pleasure of seeing players try to kill their own creatures. They think that will stop the haunting, but cast Ephemeral Shields to save their own creature for the twist ending of this horror story.

While you're waiting for the next opportunity to play Oathbreaker, watch the Haunting of Hill House on Netflix. I loved the first eight episodes, liked the ninth, and hated the tenth. If you have the willpower, skip the last episode and imagine your own ending.

Some prison cards cause similar teeth-clenching terror in me whenever they are played in multiplayer: Ensnaring Bridge, Moat, and Magus of the Moat. They would be strong in this deck, but I wouldn't add any unless I had good knowledge of my playgroup. It would take some true friends to abide the silliness of Kaya, Ghost Haunter and the seriousness of Moat.

This deck includes nine cards with haunt, even Graven Dominator. This card is not great, but I will point out it can combo with Orzhov Pontiff. You could potentially also combine it with Curse of Death's Hold or Night of Soul's Betrayal, but remember you're not too interested in killing all your opponents' creatures. In fact, if they refuse to play any to try to foil you, generously gift them a Sleeper Agent. You could also include Akroan Horse for a similar effect, depending on how much you like the idea of haunting a hollow horse.

Want to learn more about the rules and design of haunt? This Wiki has everything, including links to all Maro's blog posts about how bad it is. But if everyone comes with the right attitude toward this keyword, you can still have a screamingly good time with it in Oathbreaker.