Today we'll be going over both Red and the artifact cards. Let's hope Mono Red doesn't get too much more help with M20. No more Lighting Bolts please!

I will not be going over cards that I believe will not see play in Standard. For example, cards likeWishcoin Crab and Watcher in the Mist will be omitted since they are just Limited cards and saying, "This is just a Limited card" repeatedly gets old rather fast. Don't worry though, I will be covering all the rare and mythic cards in the set. So, if you like a certain rare or mythic, it will be mentioned in the review.

2 - This card has a lot of abilities, but it doesn't really fit anywhere. Mono-Red doesn't want it, Narset punishes it, and you want 7 mana to really get in with it. Maybe we get any easier way to put lands into our graveyard in a couple of sets but right now I'm just not seeing it.

2.5 - This card is fine, I'm just not sure where you play it. Grixis? If so, is she better than Ugin or Liliana? Maybe a big Red deck? A ramp deck is better off playing Nissa and big X spells like Hydroid Krasis. Could be good against Nexus but that's the only place it really shines.

2 - Seems playable in a Big Red deck or maybe in elementals. Don't think you really need here in either though.

2 - Another card that could fit in the big Red deck. I just wish it pinged planeswalkers when you discarded a mountain or Red card.

2.5 - I could see a Mono-Red or an Izzet deck playing Chandra's Spitfire, untapping, and then just killing you. If Guttersnipe sees play, you can expect this to as well.

2.5 - Another solid reanimation target, one that you really want to bring back with Bond of Revival.

3 - Ember Hauler fits well in Mono-Red decks. While it's not as fancy as Runaway Steam-Kin, it's always reliable and provides reach, even if you top deck it late game when your opponent has stabilized the battlefield with creatures.

2.5 - Hurray, we no longer must play Fiery Cannonade! Flame Sweep is so much better than Cannonade but won't be great until Adanto Vanguard rotates out of Standard.

2.5 - Solid card in the Sideboard for Lyra and planeswalkers.

2 - Pretty interesting card. Seems decent in the Mono-Red Mirror Match but overall just worse than Frenzy and Chandra. Maybe in a reanimator shell but his casting cost is prohibitive.

1.5 - This Leyline is best in older formats. Only other place it seems good is in the Mono-Red mirror match.

3 - This was what dinosaurs needed all the way back in Ixalan to make them playable. Well, it's here now and I think it makes dinosaurs midrange viable in Standard.

2 - A fun card to play or brew around. Copying planeswalker abilities seems pretty fun, especially some of the more busted ones like Nicol Bolas, Dragon God.

3 - When I first read this card, I thought that the tokens died at end of turn. Well, they don't! Scampering Scorcher can kill you out of nowhere with Creeping Trailblazer or it can trigger Risen Reef a bunch of times.

2.5 - This a fine 1-drop for aggressive decks, will probably see play after rotation.

3 - Awakener seems so powerful. It's a two-mana way to reanimate something and it has haste! Late game it can even get something like Multani, Yavimaya's Avatar to kill your opponent. A very interesting card that I look forward to see in action.

2 - A fine Sideboard card against White Weenie but Mono-Red was already favored in that matchup. Maybe if a different build of White Weenie emerges then you'll want the Berserker.

2 - I don't really see a place where this fits. It feels like a worse Treasure Map. You may want it against Grixis discard decks but those decks also play Bedevil and Angrath's Rampage.

3.5 - This is my favorite card in the set and it's very playable, especially alongside Field of the Dead. It's kind of like an Hour of Promise but you trade one land for a 3/5 body with an absurd ability. 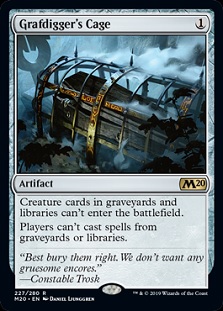 2 - Another card that's great for older formats but is a trap against Dreadhorde decks. They'll just reanimate planeswalkers and kill you with their explore package + Hydroid Krasis.

3 - This is the best tribal creature anthem in recent memory, mostly because it also provides you with card advantage while pumping your team. Seems like a decent main deck card or even a sideboard card.

2 - We still don't have enough good artifacts for this to be worthwhile. Now it's just a worse Experimental Frenzy.

2 - Same thing here, not enough artifacts for Steel Overseer to be good. You're forced to play Saheeli, Sublime Artificer or Sai, Master Thopterist to try to make an army of artifacts first. Which means you can't really play Steel Overseer on curve and pump your team.

There aren't enough artifact cards to make a Top 5, however I'm super pumped to play Golos. The Red cards also seems good without anything being too pushed. I remain impressed with the cards from Core Set 2020. I'll see you tomorrow when we go over the rest with the green and land cards!