âIs there a card youâve always wanted to do?â Thatâs the question Ben Lavender asked me a few weeks ago at the Star City Games Invitational in Indianapolis. As long as I have been altering cards, I have always wanted to paint a Black Lotus or a Mox. That was my answer. Sure, Iâve painted Force of Wills, an Imperial Seal, a Library of Alexandria, even a Timetwister. But a Lotus has always been missing from my achievements list.

Well, then, ask and ye shall receive! Over the following weeks, I kept in touch with Ben, as it was undecided what would go on the card. I had seen a few altered Lotuses in the past, but they tended to be modest adjustmentsâextending the original art or adding minor elements to conceal damage. Whatever we decided on, I wanted it to be my most ambitious piece yet.

Initially, I researched some Asian source imagery. It fit the Lotus thematically, and Iâve always been a fan of Japanese prints that came out of the nineteenth century. When I couldnât settle on an image that fit compositionally, I looked for other ideas. Art Nouveau was the answer. Another product of the late nineteenth century, Art Nouveau was elegant, ornate, and often incorporated flora and other plant life. It was perfect for the Lotus.

I spent some time looking at the work of Alphonse Mucha, Art Nouveau master. After settling on some images, I mocked the whole thing up and ran it past Ben. He was sold, and I was beginning to get excited. New challenges excite me. I knew I would be able to pull off the elaborate design, but it was certainly going to be a test of my endurance if nothing else.

Letâs start with an image of the card in question, an Unlimited Black Lotus with a pretty nice marker job. 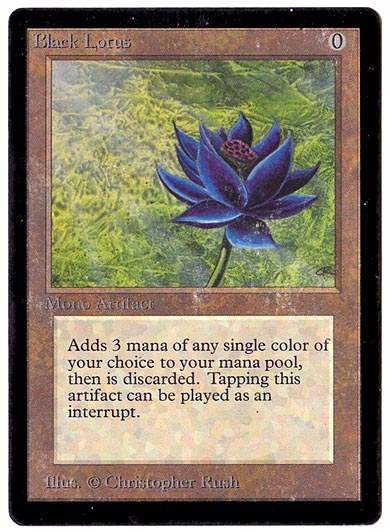 As per my usual, I laid down a base coat of gray mixed from normal white and black liquid acrylic. I was especially careful at this step to eliminate any bumps or ridges that appeared in the primer. Any underlying imperfections would have shown up in the final product, and itâs the smallest details that separate the good work from the great. 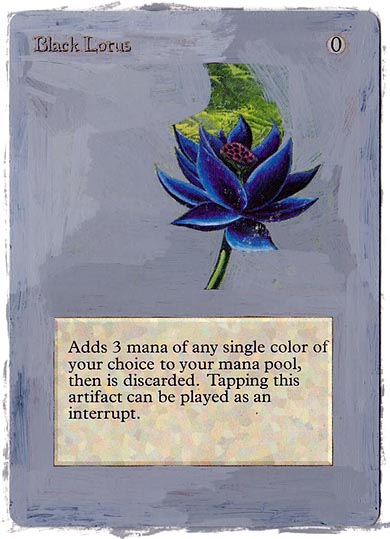 After that, I took my time laying down the pencil work using a carbon transfer of the image I mocked up earlier. 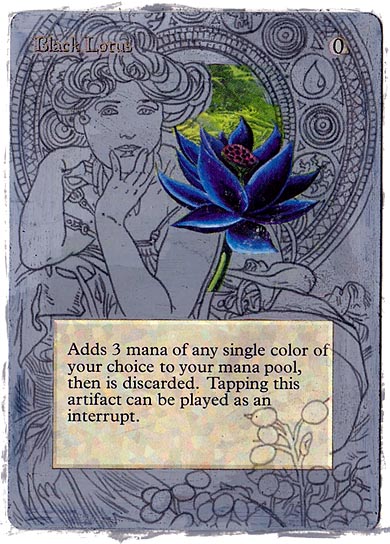 Then it was a matter of cleaning up some of the primer and inking over the graphite. This not only lent definition to the finished product, but practically speaking, also prevented smearing away the layout throughout the remaining painting process. 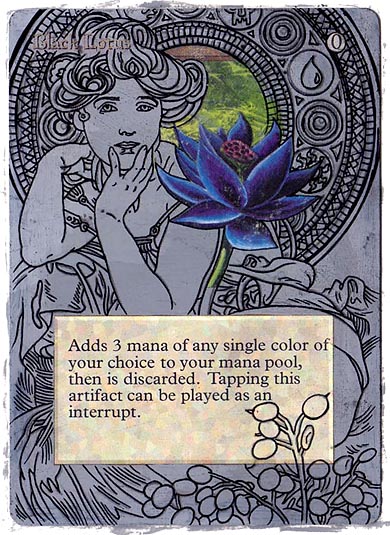 Moving along into the real painting, the next thing I needed to do was lay down some thin color over everything. Limiting myself to multiple thin coats helps to achieve vibrant colors that maintain a smooth finish. This is especially true for reds, yellows, and skin tones, because those colors tend to be very translucent and streak in single coats. 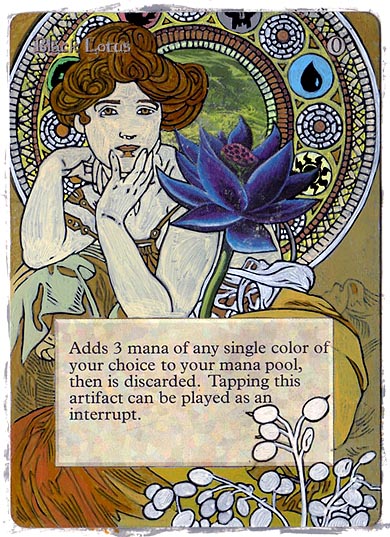 Iâve spoken in the past about compartmentalizing ambitious projects. I find this incredibly important when attempting to produce quality pieces, as itâs easy to get lost or lazy and hurriedly try to finish the work. I took the same approach here. With the base color down, I focused on the figure and the wheel behind her. 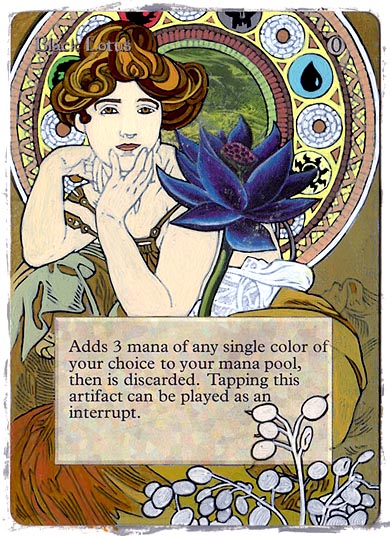 With another thin layer finished, I proceeded working from top to bottom, this time focusing primarily on the background. 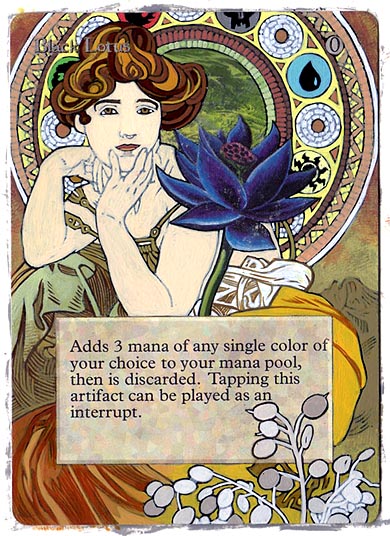 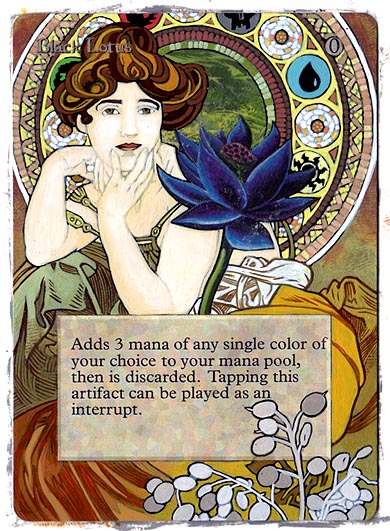 From there, I further built up the tone of the figure and worked on the small details of the mosaic wheel. This left only a fair amount of work on the woman, mainly her facial features, and a crazy amount of outlining. Normally, I use permanent ink microns for this sort of work, but in the case of the Lotus, I limited myself to the brush. Brushes can be unwieldy and take longer, but they also offer width and color variation. Clearly, this project was worth spending the extra time. 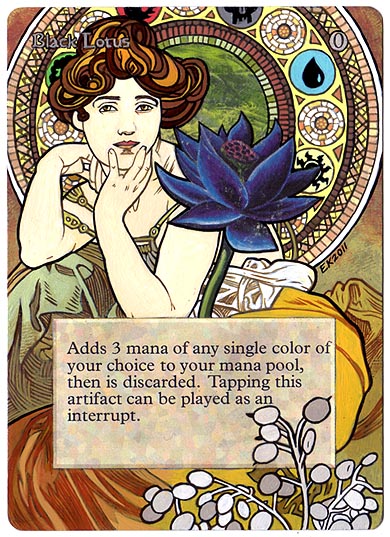 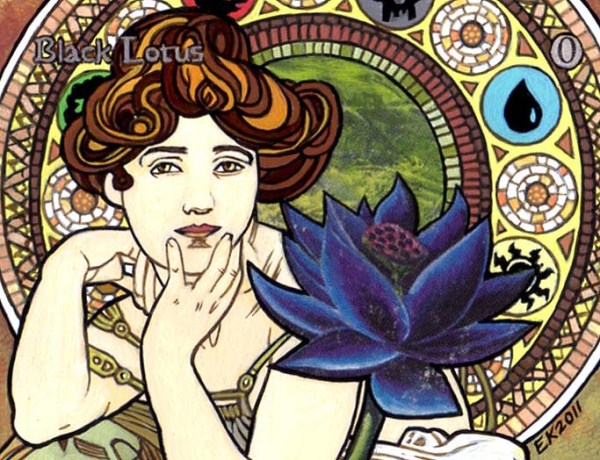 A total of fourteen hours elapsed over the course of this alter, easily the most time Iâve ever spent on a card. When it comes to altering, my focus has always been on quality. As I mentioned previously, I love presenting myself with new painting challenges. Theyâre not only motivating, but also elevate the craft to a higher level. The same competitive spirit that attracts me to Magic also pushes me to try and be the best alterer out there. While Iâm not arrogant enough to say Iâm there yet, the bar has certainly been raised for me. And I canât wait to set it higher!

As always, thanks for reading. I love offering people painting advice, so feel free to contact me with any questions you may have. Cheers to Ben for making this project possible. Until next time!