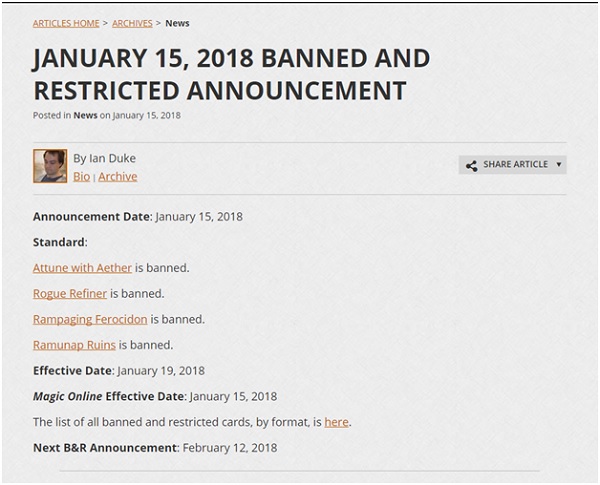 With the release of Rivals of Ixalan and the banning of these four cards, the entire landscape of Standard is about to change immensely. Energy variants and Ramunap Red have been the most dominant decks in the format for what feels like forever at this point, and clearly wizards felt it was time to put an end to their reign.

It's a bit unfortunate that Standard is in such an exciting place at the moment, and there isn't a premier Standard event on the horizon. But the format will be featured in at least some capacity at the SCG Dallas Team Trios Open, so at least we have that. While I won't personally be playing Standard for my team at that event, I have taken it upon myself to construct the deck for my team. So with such a massive hole in the metagame suddenly opening up, the question I have to answer is; where does the format go from here?

Before we just start throwing random lists of cards together, it's imperative to identify the impact of these changes. The most common mistake I see whenever a format undergoes a substantial shift, is that people make baseless assumptions that X is good now that Y is gone.

So we have to identify what exactly changes, and then figure out how we can stay ahead of the curve.

Temur Energy is Gone, and Mono-Red Will Take a Serious Hit

There are a few immediate results of this, but the most important one will be the scarcity of Red removal in the format. Harnessed Lightning was the best removal in the format by an incredibly wide margin, and it doesn't exactly have an obvious home at the moment. There hasn't been a Standard legal removal spell in ages that scales as well as Harnessed lightning does. The fact that Harnessed lightning can deal with cheap creatures at an efficient rate while bolstering your energy count and also being able take out expensive creatures at an insane rate in the mid-late game placed some pretty severe restrictions on the creatures that could be played.

Abrade is another card in this category that can be expected to show up in smaller numbers. While finding a home for Abrade is much easier than finding one for Harnessed Lightning, I still suspect it won't be nearly as ubiquitous in the format as it once was. Mono-Red will still be a player in the format, but likely in much smaller numbers. Also, my initial inclination is that newer iterations of the deck may not even want any copies of Abrade in the main deck. Without access to Ramunap Ruins to offer inevitability, including a purely reactive card that only serves to extend the game, such as Abrade, may not be correct. It's a rough draft, but early Mono-Red lists may resemble something like this.

Rogue Refiner, Whirler Virtuoso, Bristling Hydra, Servant of the Conduit, Glorybringer, The Scarab God, Earthshaker Khenra, Hazoret the Fervent, Vizier of Many Faces. These cards were the premier threats in the last format, and they all have something in common: they line up well against removal. All of these cards either: provide value when they enter the battlefield, have haste so they can be played for immediate value against a tapped out opponent, or have an ability that makes them difficult to interact with. Relying on creatures sticking around was not a viable strategy in the last format, and this was due, in large part, to the prevalence of the Red removal spells. Even something like Longtusk Cub wasn't safe, and we saw people omitting them from Temur entirely as the format developed. But if we expect the format to shift away from this, the door really opens up on what creatures can be played.

A deck that immediately jumps out is

Constrictor. I've always been a big fan of the innate versatility of this deck. I played the deck at Pro Tour Hour of Devastation and built the Sultai version at the beginning of the last format. Unfortunately, Temur proved too flexible to target, and the three color streamlined version of the deck eventually pushed it out of the format. But without Temur,

Constrictor might end up becoming the premier midrange deck in Standard.

It's not all good news for Winding Constrictor though, as it doesn't escape the bans completely unscathed. The Sultai version is completely unplayable without Rogue Refiner and Attune with Aether, and even straight

will have to undergo some considerable changes.

This is my first draft of the deck, and it doesn't look too shabby to me. Without access to Attune with Aether, pushing Longtusk Cub through becomes a bit too difficult. It's possible you're supposed to eschew energy entirely, but Glint-Sleeve Siphoner just seems too absurd not to play, even if it means jumping through a few hoops in order to do so.

Another deck that operates on a similar axis is the

At first glance, this deck always seemed like it had a reasonable Temur matchup, but in practice it wasn't anything more than passable. There just wasn't a reason to play this deck when you could beat Temur more by just playing Temur. The deck wasn't good enough at its job, beating other midrange decks, to continue seeing play, but I wouldn't be surprised if it were to see a resurgence. If we see a shift to midrange decks that function more like

Constrictor than Temur Energy, this could easily end up being one of the best decks in the format.

It's possible that we should even be adjusting the shell to go even further over the top of other midrange decks. The

Gift deck that I helped Ben Friedman work on for the last Pro Tour comes to mind as a possibility.

This deck gets a few new tools in Ravenous Chupacabra and Dusk Legion Zealot, and that combined with the metagame shift resulting from the bans could be what the deck needed to become a real contender.

While the absence of any tribal decks in the format was likely the result of their own shortcomings, I can't picture worse matchups for them than Temur and Red. Getting your early threats picked off is back breaking when you're just trying to develop your board presence, and Temur and Red could do this easily while snowballing their advantage. If we're expecting a shift away from Red removal to more expensive cards like Ravenous Chupacabra and Vraska's Contempt, then these decks will have lot more going for them than just getting some new tools. I touched on Merfolk a bit in my last article, so I don't want to go into too much detail, but there have been a lot more cards spoiled for the deck now than there was then. This is my updated list.

If the decks we were discussing all benefit from the absence of Harnessed Lightning, Chandra, Torch of Defiance, and Glorybringer, then we should simply start building new decks with them. Other forms of Red Midrange besides Temur didn't exist because there wasn't a reason for them to when you could just play Temur. Without that as an option, we could see the formation of new archetypes featuring these cards.

The most basic of these would be a

Midrange deck. This would essentially just combine a bunch of the midrange cards we've talked about so far into one deck. A rough draft of the deck would look something like this.

I normally hate decks like look like this. They always seem fine on paper; but, in reality, all of your opening hands are clunky, and you're prone to flooding out. I might be fooling myself again, but this one doesn't actually look too bad to me. It's definitely a bit rough, but I wouldn't be surprised if there was something here. The deck should have enough innate card advantage between Glint-Sleeve Siphoner, Live Fast, and the Planeswalkers. The removal is fairly diverse in application, so there shouldn't be too many instances where your answers don't line up and you die. The Threats are lean, yet still rather difficult to deal with. Overall, the deck has a lot going for.

Another option in this space is Grixis Energy. This deck has seen some moderate success online for the past few months, but it was basically impossible to justify playing it over Temur. We actually even saw the deck evolve to the point where it was just splashing for Attune with Aether and Rogue Refiner, and that list broke out at the World Magic Cup. And while those cards almost certainly made the deck better, they weren't integral pieces to it.

If I had to submit my team's deck for SCG Dallas this second, it would probably be this. This deck is all of the best cards left in Standard minus Glorybringer, which would be great but a bit too rough on the mana, and they mesh together reasonably well. I played the

Control deck that popped up at the World Championship a decent amount, and the deck always seemed unnecessarily clunky. In a world without Rogue Refiner, you're not compelled to play full on control just to be able to outcard the Green decks. Because of this, we can trim a lot of the top end off of that shell and function more like a midrange deck.

So assuming viable shells can be found before the metagame starts to shape out, this is where I want to be early on. I only have three days to figure it out before I leave for Dallas, but I'm optimistic that I have a comprehensive enough understanding of the format to hammer out a solid list before then. Hopefully I can figure it out again, and aid my team in another trophy.