The most famous last words in Magic, spoken by a woman whose noble sacrifice saved her Kjeldoran village. Saffi Eriksdotter and her brother Hans Eriksson were on guard the night the Lhurgoyf attacked. While the Lhurgoyf tore Saffi to pieces, Hans escaped to warn the town.

At least that's how things happened in the original timeline. In the Time Spiral storyline, a time bubble sucked Saffi into the present, abandoning Hans to the Lhurgoyf and probably dooming the rest of her friends and family as well.

In the blink of an eye, she strode from deep snow to dusty waste. From the crease of light behind her, a voice rang hollow: "Saffi, wait for meâ.â.â.â"

Saffi isn't the first G/W legendary creature I've worked on; in fact, I've made more Selesnya-aligned 3D commanders than any other alignment. The first one I made was this Asmira, Holy Avenger: 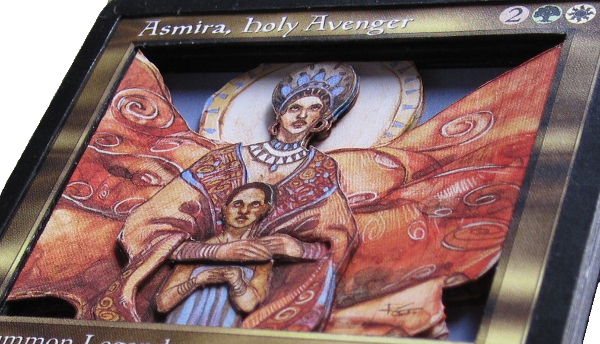 Fun Vorthos fact: Asmira didn't earn the title of Holy Avenger until after her death.

Asmira, Holy Avenger is a tough commander to build a deck around. Her ability makes you want to have a lot of creatures dying, but since it only triggers if she's on the battlefield when they die, Day of Judgment effects won't cut it without Darksteel Plate or regeneration (and since most sweepers have the no-regeneration clause, it's even tougher).

Based on what I've seen, Captain Sisay seems to be the most popular G/W commander. Building a deck around her is fun and easy, and the result can be very powerful depending on the toolbox of legendary permanents you choose. 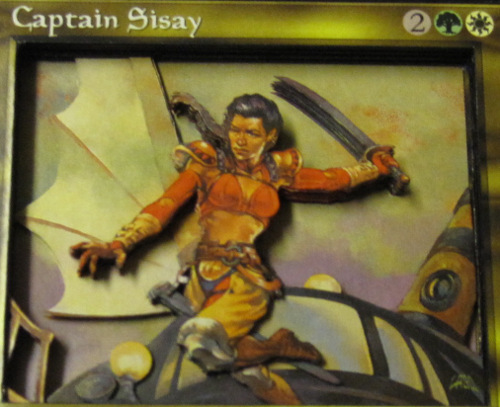 When I made that 3D Captain Sisay, my 3D-making focused primarily on cutting a lot of repetitive basic layers with just a few detail pieces added in spots where basic layering would not work. The first 3D card I wrote about for this site was made using that same method. Over time, my process has shifted more and more away from repetitive layers and toward more detail pieces. If you look back over my first year of articles, you can see this shift happening slowly over time. Neither method is better or worse; both have their advantages.

The detail-piece method often lends itself to breaking card art down into separate zones. The last couple of 3D cards I've made have had three distinct zones to their art. Saffi Eriksdotter's art is much simpler; it's just Saffi in the foreground and the mountains in the background. When I was planning how to construct this Saffi, I mentally broke the project down into the two zones.

Most of the basic layers for the 3D Saffi are the mountains in the background. Only one basic layer is Saffi herself. I cut that one first: 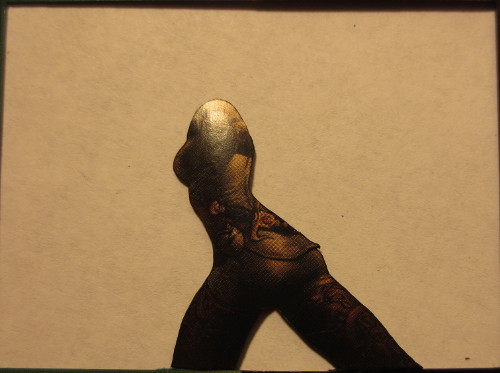 Next up was figuring out which detail pieces I would need to complete Saffi's body. After staring at the art for a few minutes, I came up with a short list. 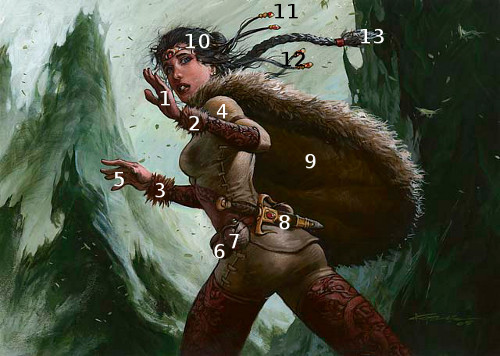 Most of these pieces required some work before I could attach them to the basic layer of Saffi's body. The wristbands and small braids needed to be shaved very thin, and every piece except for the long braid required some amount of shaping with pottery tools. The fur edge of the cloak was the most challenging part. I could have cut a separate detail piece to raise up the edge, but it would have been difficult to make that look correct due to the shape and perspective of the cloak. Instead, I performed heavier shaping of the fur edge to make it look as though that part of the cloak was thicker. You can see the results of this in the pictures of the completed card below.

Before assembling all of the pieces, I ended up cutting two more to add to the mix. The first was the thumb and forefinger of her right hand, and the second was her right breast.

After preparing everything for Saffi, I moved on to the mountains in the background. The farthest background layer looked like this: 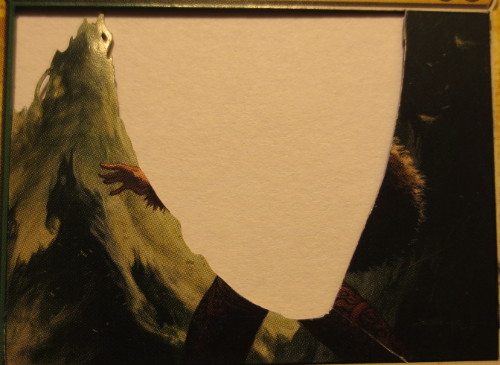 The right side of that layer could have completely left of the foreground mountain since it will be covered by the actual layer of that card. It was just faster to cut a random line up through that mountain here than to carefully cut out the straight border lines of the card. I did the same thing on the next mountain layer: 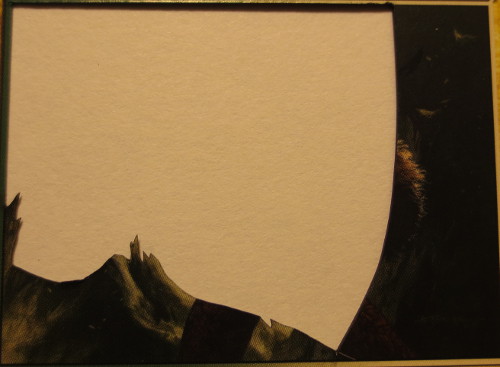 I completely removed the farthest-forward mountain from the next layer because I wanted to bend that mountain backward a couple layers, and I needed to make sure the space it was going to bend back into was clear: 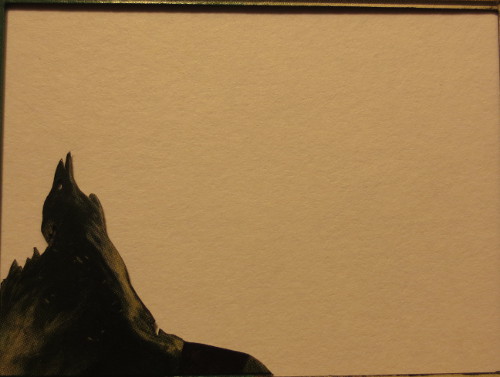 Finally, I cut that farthest-forward mountain: 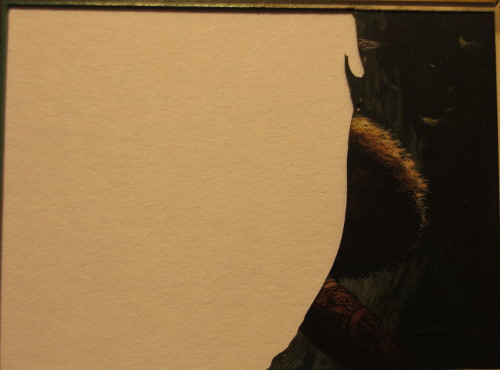 While I did some amount of shaping on all of the mountain layers, that layer needed the most work. Since Saffi is leaning back into the art, that mountain needed to curve back away from her as well. I cut the mountain away from the top and bottom borders to allow it to curve back.

After assembling Saffi and lining her up in front of the mountains, I found that Saffi's cloak in the curved mountain was slightly visible behind her. If neither Saffi nor the mountain had been curved or bent at all, they would line up better, but those minor adjustments put the alignment off just enough to be distracting. To correct this, I painted away the cloak and the tip of Saffi's braid on that mountain. 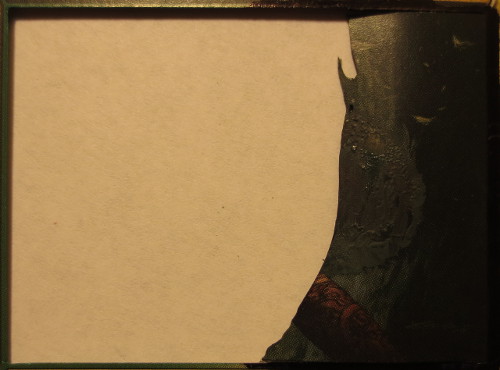 As usual, my painting was mediocre but more than sufficient for the job. 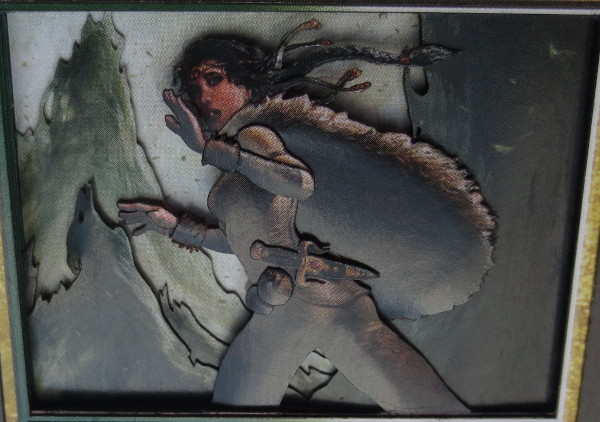 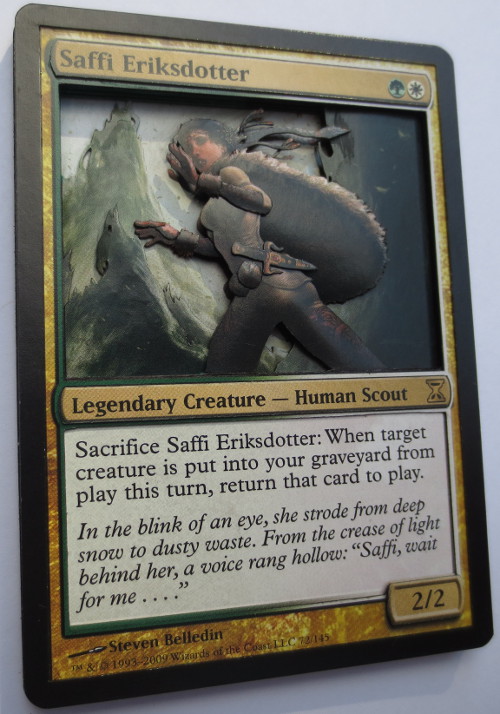 I hope to make at least one 3D Commander from every guildâs color combination between now and the end of Gatecrash. Who do you think I should do for each of the four remaining guilds in Return to Ravnica?