In this experiment, we open the vent and release the Dragonâs savagery, breath, and fury.

Doing crazy things in Magic is often powered by generating more mana than should be reasonably accessible. Thus, cards that give us more mana than they require on that turn can be very powerful. Something as innocuous as Llanowar Elves or Birds of Paradise gives us 1 free mana. Each of those requires a 1-mana investment on a previous turn, but on the following turns, weâre up by 1. These fair cards have long been respectable options in various formats.

The MoxesâMox Emerald, Mox Jet, and so onâgenerate 1 mana each for a 0-mana investment, and they donât come with summoning sickness. Sol Ring generates 2 mana every turn after an investment of 1. These cards are banned in Legacy and restricted in Vintage, the most powerful Magic format.

, thus ramping us from 3 to 5 mana. It only last for one turn, but it turns out that the effect is powerful enough that it had to be banned in Modern. Granted, it was primarily played alongside Pyromancer Ascension, with which its 2-mana bump was turned into a 7-mana bump, but my point stands.

Now, I donât expect Savage Ventmaw from Dragons of Tarkir to become banned in any formats any time soon, but an effect that adds 6 mana to my mana pool for 0 certainly catches my attention. 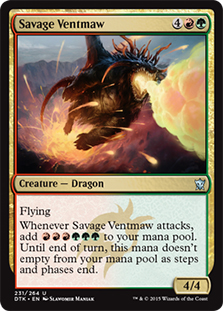 Radha, Heir to Keld has a similar ability. Sheâs a 2/2 for 2, and when she attacks, we add 2 mana to our mana pool. But there are a couple differences between her and Savage Ventmaw.

First, and most obvious, is that her mana must be used during the attack stepâbefore our opponent even declares blockers. Thatâs a pretty huge restriction. Now, we wonât suffer mana burn for not spending the

âas used to be the caseâbut if we donât make good use of the mana, sheâs basically a legendary, red variant of Llanowar Dead, which just isnât exciting.

The second big difference is that, for 2 mana, sheâs just not worth abusing. For

, on the other hand, Iâm willing to jump through some hoops.

Now, a few paragraphs ago, I implied that Savage Ventmaw provides 6 mana for 0, which seems pretty blatantly wrong. I mean, the Dragon obviously costs 6 mana, and we have to wait until the following turn to actually gain that benefit. And on turn seven, how much of a big deal, really, is it to gain 6 mana? Well, casting Kozilek, Butcher of Truth in our post-combat main phase could be fun, especially if itâs only turn five or six because we ramped a bit.

But I want to see how quickly I can make that 6 manaânot how much mana I can make with it once I have the Dragon. Incidentally, Dragon-related spells and red Dark Ritual effects have met before through the likes of Dragonstorm decks of yore. Rite of Flame, Seething Song, Dragonstorm, and Bogardan Hellkite used to come together to do the trick.

One of the first cards that leapt out at me was Dragon Breath. That and its cycleâDragon Wings, Dragon Shadow, and so onâoffer free effects. The only catches are that they only boost (for free) creatures with 6 or more mana cost and that the Auras need to be in the graveyard first. Of course, we could cast then first, but thatâs a waste of time.

Conveniently, Savage Ventmaw costs 6, so thatâs one complication down. Also conveniently, card selection is great for combo decks, and Faithless Looting can find us pieces we need while also dumping the Dragon Breath we want in our âyard.

Haste is great, but the Breath also just so happens to tack on Firebreathing. One thing that works great with Firebreathing is mana, and the Ventmaw makes 6 of it. Sure, we could cast Kozilek, but letâs see if we canât just kill our opponent.

With Dragon Breath and 6 free mana from the Ventmawâs attack, we can increase its power to 10. Add in some Psychotic Fury, and thatâs 20. Where did that extra 2 mana for the Fury come from? Well, remember Radha, Heir to Keld? Letâs attack with her, too, for 2 more mana. She may be blocked, but our Dragon flies (letâs hope thatâs enough!).

half of the Ventmawâs mana. And thatâs what Skyshroud Elf is for. It taps to accelerate us in our combo while providing endless filtering from

Gamble, Manamorphose, Geosurge, Kessig Wolf Run, and the new Sarkhanâs Triumph should give us some consistency (or inconsistency in the case of Gamble), and that pretty much rounds out the list.

Now letâs take a look at some (dreamy) ways this could play out.

On turn one, we play a Mountain and cast Faithless Looting, drawing two cards and discarding two, including a Dragon Breath.

On turn three, we play a Copperline Gorge and cast Seething Song with mana from our lands. With 3 of that mana, we cast another Seething Song. With

, we cast Savage Ventmaw with

from our Elf. The leftover

lets us cast Psychotic Fury, and when we attack, we gain 6 mana. 3 of that is

and can be directly funneled into Firebreathing. The

on accident!). Our flyer now has 10 power and double strike, and that should give us the turn-three win. And because we drew a card with Psychotic Fury, we still have a card left in our hand. 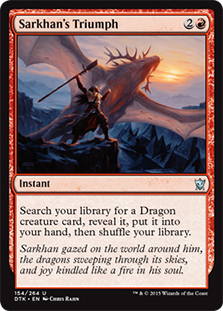 There are a few other ways this could go that would still result in early kills, but theyâre at least a turn slower. Radha, Heir to Keld can provide the extra

we need for casting Psychotic Fury, though weâll need both it and Skyshroud Elf, so that puts us at at least turn four.

And we donât have to breathe fire with Savage Ventmaw. Itâs not totally crazy if we just want to use the mana to cast a follow-up Dragon. Having two early 4/4s doesnât seem terrible. And if weâre just dead-set on using the mana for power-pumping, the one-of Kessig Wolf Run can help us get there.

This deckâs pretty linear and fragile, but unlike the Dragonstorm deck, it does have a few alternate routes to victory available to it, such as just playing Elf Warriors and Dragons. But if you love dragons flying out of volcanoes, if you want to dust off your Modern-banned Seething Songs, of if you just like Gambleing, give this deck a try.