My favorite day of the week is Wednesday, not because itâs âhump dayâ or because I am that much closer to the weekend, but because Wednesday is #Vorthos day. Each Wednesday, Gathering Magic puts out, on average, two Vorthos-geared articles, whether itâs art-related content from @VorthosMike, cosplay updates from our oracle @MoxyMTG, or writing and general flavor yelling from me. We try to put out our Vorthos content on Wednesday because we are good plebeians and aspire to align with our mothership DailyMTG. Each Wednesday on the main Magic site, the creative people behind Magicâs IP release an Uncharted Realms article, providing us a window into worlds beyond our imagination.

Last week, Story Team Manager Jenna Helland published an extremely important article for Vorthos. If you have not read it yet, I strongly encourage you to check it out. In short, Jenna explained that Magicâs storytelling model is undergoing a shift in order to align with three pillars: 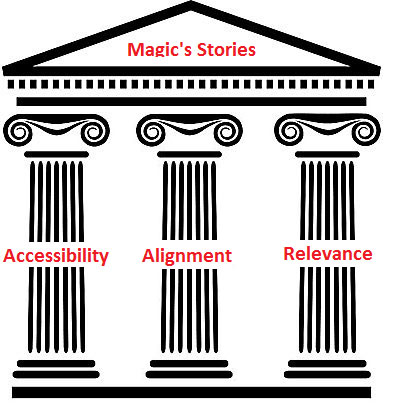 Jenna also revealed to us that Magic Origins will be focusing on five Planeswalkers, their respective home planes, and their first planeswalks.

For todayâs article, I want to do a little recap and discuss each of these five characters and what we know about the ten worlds that will be the focus of this landmark set. 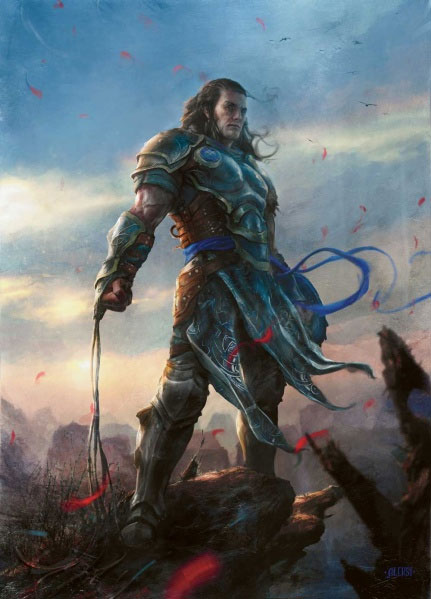 We first met Gideon on the plane of Zendikar as he fought against the rising tides of Eldrazi spawn. Gideon is known for his powerful hieromancy magics and the four-bladed sural that he wields in battle. Gideon is not one to sit on the sidelines, and he often gets himself into sticky situations because of his struggle to resist helping others in need. 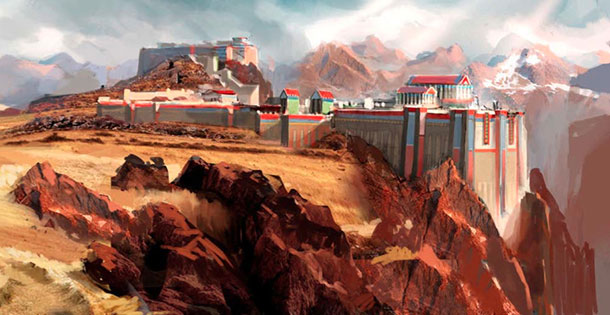 Gideon was born Kytheon Iora on the plane of Theros. He grew up in the slums of Akros, the red and white Spartan analog human polis on the Greek-inspired plane. The polis is positioned in a seat of protection for the rest of Theros, serving to separate the settled human lands from monsters roaming the wilds of nearby mountains and beyond. Warriors from Akros are considered to be the greatest on the plane, so we can clearly see where Gideon developed his famous fighting abilities. Their entire culture is based around hardening body and mind, becoming the perfect weapon in combat. 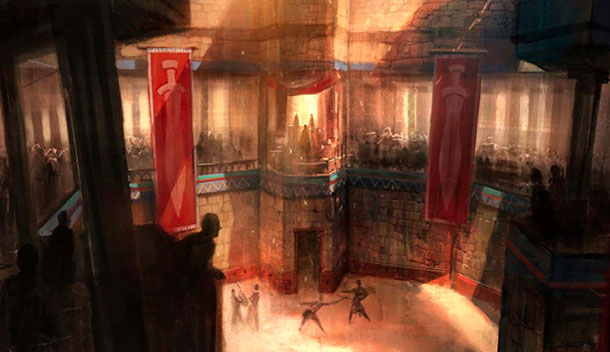 From Jennaâs article, we learned that Gideonâs first planeswalk was to Bant, one of the five shards of Alara. Bant can most easily be described as Camelot on the savanna, showcasing a cast system of knights riding majestic hooved-lion mounts covered in sigils and armor. On the shard of Bant, combat is more ritual than anything else. With no concept of black or red magic, the knights of Bant have no reason to consider ideas such as cowardice or betrayalâmade evident in the fact that their backs are the only part of their bodies to go unarmored. 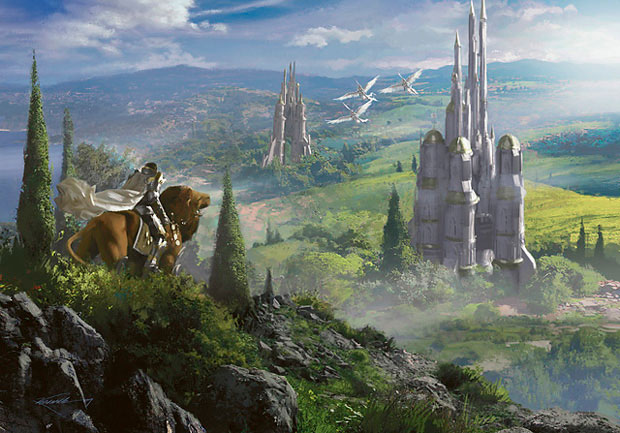 An important facet of this set will be understanding what point and time is being represented by the cards. We know that during Shards of Alara block, Nicol Bolas conspired to cause the five shards to converge in conflux, attempting to use the powers of the maelstrom to help him regain some of his lost power. Because this is an origin story, and because we will be seeing Gideonâs first planeswalk, it is important to remember that these cards will represent how he was at the time, and not how he exists today. Similarly, the planes we are shown in the set will be as they were at the time and not how they currently exist. It will be interesting to know whether Gideon planeswalked to Bant before the conflux occurred or after. 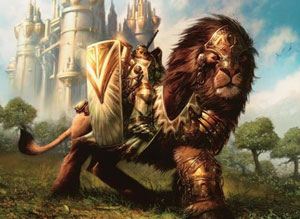 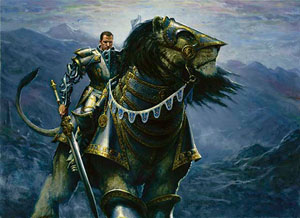 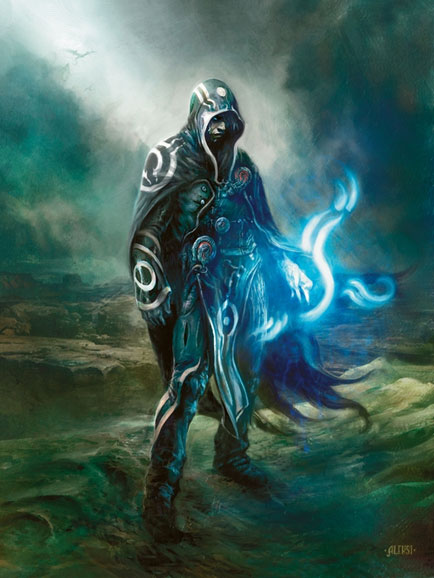 Jace Beleren was one of the original Lorwyn five and has quickly become the Mickey Mouse of Magic. Jaceâs specialty is mind magic and illusions, and he currently boasts the title of Living Guildpact for the plane of Ravnica. Most recently, we encountered Jace on Ravnica, as he worked alongside Ral Zarek on project lightning bug. 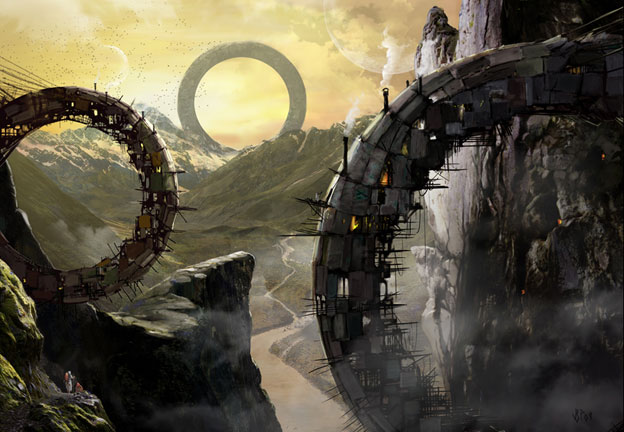 Not much is known about Jaceâs home plane. Vryn was featured in the multiplayer product Planechase, and from the art on the planeâs card, we know that Vryn has at least one area where there are massive structures known as the Mage-Rings. From what we can see in the Planechase art, the Mage-Rings look unfinished, deteriorating, or under construction. If we look at the art for Ringwarden Owl, we can see more unfinished Mage-Rings in the background. I am curious to find out who is responsible for creating these massive structures and why they are building and or neglecting them. 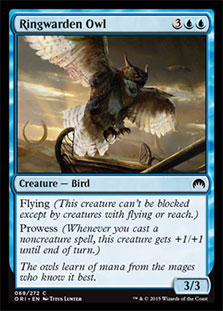 Usually, we only get to see cards designed for one plane a yearâtwo if we are lucky. Magic Origins will introduce us to two completely new planes on its own, and I for one am excited to see what Vryn has to offer.

It is fitting that Jaceâs first planeswalk was to the plane of Ravnica. The city-plane has become a sort of adoptive home for Jace, and he was central to the plot of Dragonâs Maze in our return there a little while ago. Ravnica is unique in the fact that it is an Ecuminopolis, a Greek term meaning âworld city.â Other than the fact that the entire plane is a city, Ravnica is known for its ten guilds, each vying for power. What I am most excited for is to see cards set on Ravnica designed from Jaceâs perspective instead of from the perspective of the ten guilds, showcasing flavorful, mechanical representations of Ravnicaâs guilds without access to guild keywords. 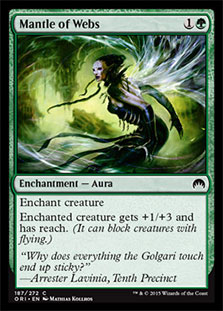 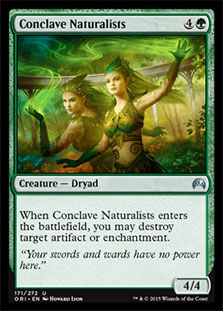 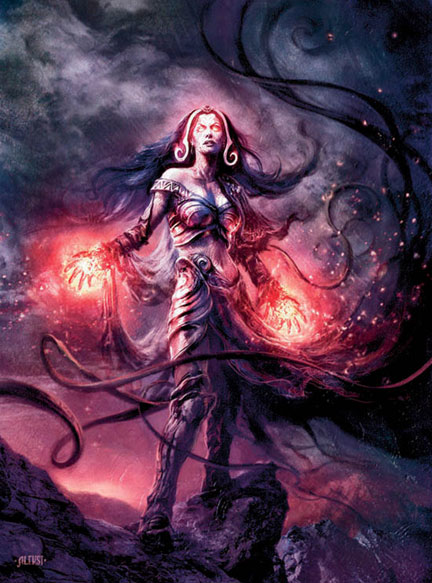 Also a member of the Lorwyn five, Liliana Vess is a master necromancer capable of raising armies of the undead. Well over a century old, this villainess appears to be in her twenties through the use of some dark form of magic. Our best information on Lilianaâs early years can be found in the web comic âThe Ravenâs Eye,â in which we learn of Lilianaâs sick brother Josu and her desire to save him from death.

From Jennaâs article, we learned that Liliana is from Dominaria. For older players, Dominaria is a special plane in that it was the setting for the large majority of Magicâs early sets. For somewhat newer players, Dominaria was the setting of the craziest and most confusing block ever. For the newest players, Dominaria may as well be an entirely new plane. Regardless of when you started, the plane offers some interesting story potential as there are numerous locations to be further fleshed out (if they have not already been obliterated). Dominaria is also an interesting location for similar reasons to those presented for Gideon and Bant above. We know that Liliana is super-old, but we do not know how old she is exactly. We know that Dominaria has suffered some pretty radical events that changed the landscape of old into a post-apocalyptic and struggling world. Where Lilianaâs childhood falls (both in location and in the timeline) will be interesting to see. 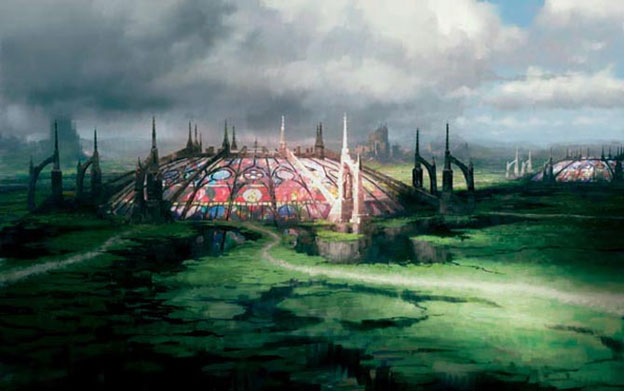 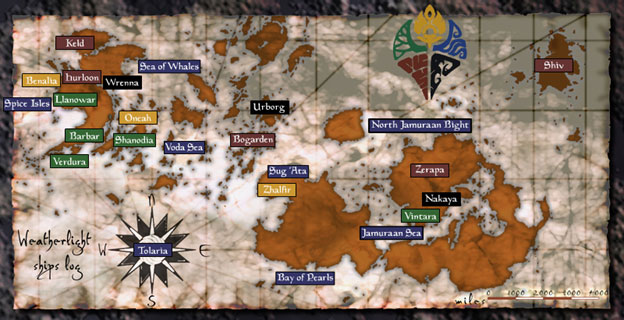 The fact that Lilianaâs first planeswalk was to Innistrad is again incredibly fitting. Innistrad is the gothic-horror world filled with various forms of the undeadâa specialty of the Liliana we know and love. On Innistrad, humans are plagued by vampires, werewolves, ghosts, and zombies, all of which want nothing more than to turn the poor hapless humans into one of them. We also know that Innistrad is home to demons, one being the mighty Griselbrand. It will be interesting to see the effect a trip to such a dark and horrific world will have on the young planeswalker (even if we already sort of know the outcome). 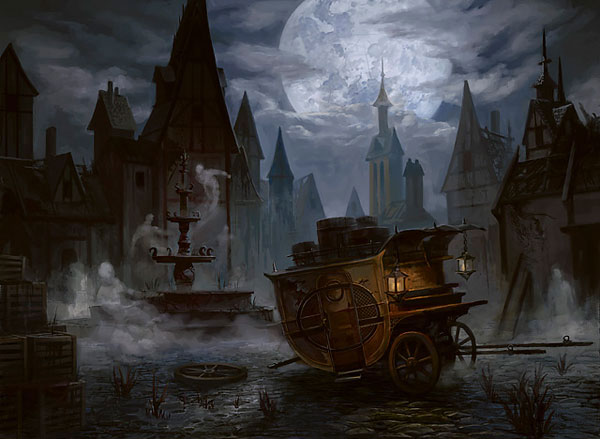 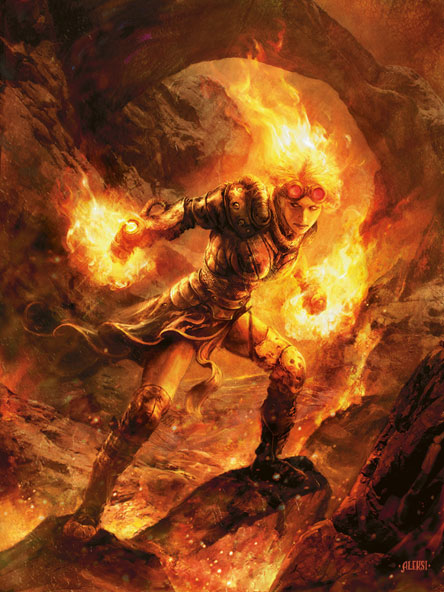 The third and final member of the Lorwyn five to be featured in Magic Origins, Chandra is a fierce pyromancer who likes solving problems with fire. A passionate mage who has problems with authority, Chandra epitomizes the chaotic flame-wielding red mage. 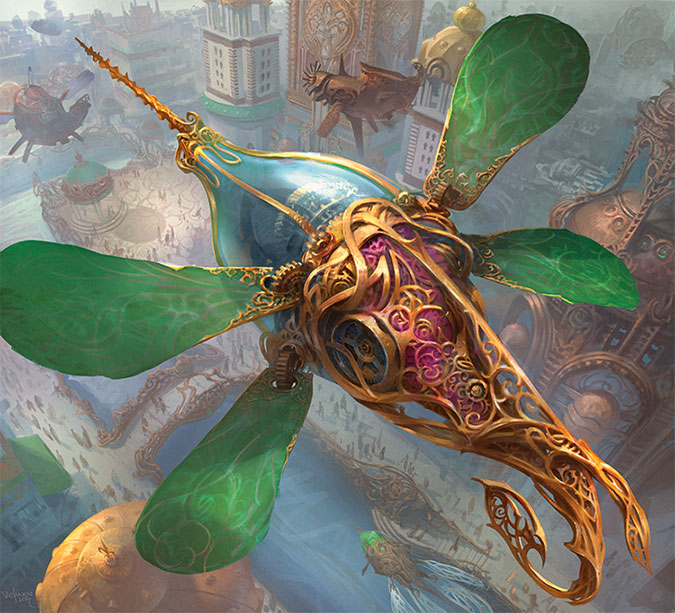 Before Doug Beyerâs Uncharted Realms article Chandra's Origins: Fire Logic, we knew relatively nothing about Chandraâs home world. Kaladesh has yet to be featured on any printed Magic cards, and it has not been featured in any supplemental products like Planechase. The article focuses on two major areas of Kaladesh, helping to paint a picture of the plane for us through the characters presented in the story as well as the art provided along with the article. Much of the story takes place within the city of Ghirapur, home to gearcrafters, thopter-builders, clockforgers, inverters, and artisans. I have seen this part of Kaladesh described as âsteampunk meets India,â and I think that is an accurate description of what we can gather from the revealed art. 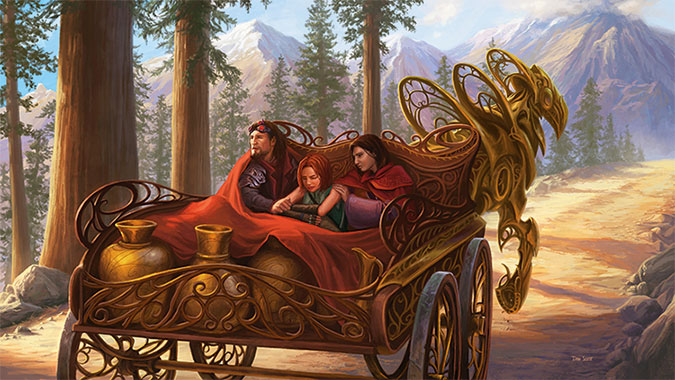 We also know from the article that Kaladesh has some areas of untamed wilderness, and this shot of Chandra and her parents provides us with an idea of what living on Kaladesh might look like beyond the artifice-infused city. From the skyships to the consulâs foundry to the roterothopters to the intricate pata blades wielded by soldiers and captains to the mysterious wilds filled with great horned beasts, I look forward to seeing more of Kaladesh in the future.

We don't really know much about Chandraâs next stop in the Multiverse either. In game, Regatha has been featured on two cards: Mount Keralia in Planechase and Regathan Firecat from Magic 2014. We also know that, on Regatha, is Keral Keep, a monastery established around Jaya Ballard, another famous pyromancer and planeswalker from Magicâs past. Jaya, being the charismatic individual she is, inspired the locals on her visit to Regatha so much that they decided to build a shine to her and her pyromantic teachings. 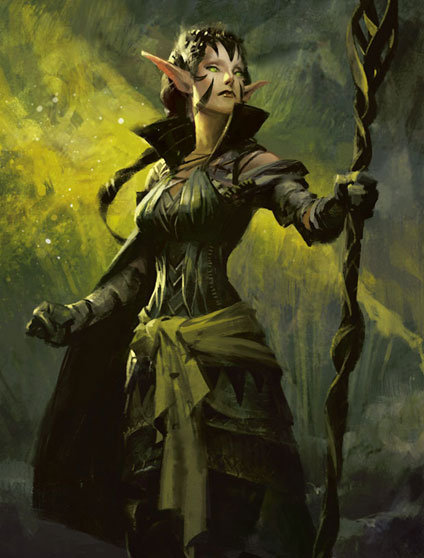 Last but not least, we have the elvish Planeswalker and Zendikar local Nissa Revane. Nissa is a powerful, nature-magic wielding mage capable of animating the land into powerful elementals to fight by her side. 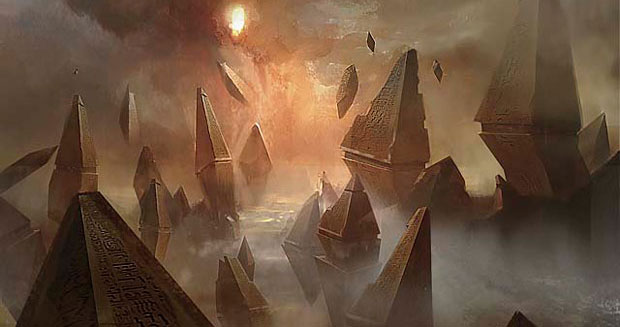 Nissaâs home world is a tumultuous plane filled with dangerous ruins waiting to be plundered by would-be adventurers. Zendikar was concepted to be Indiana-Jones-meets-D&D, with adventuring parties of allies following treasure maps to ancient temples filled with traps and treasure. The plane is easily distinguished from other worlds by the land itself, for Zendikar serves a far darker purpose. We learned in Rise of the Eldrazi that Zendikar was a prison world containing ancient and unimaginable world-eating horrors. Serving as that prison, and riddled throughout the broken landscape, are massive stone hedron networks that float in the air and can be found embedded in the earth of the roiling plane.

Nissaâs first planeswalk was to the bright and pastoral world of Lorwyn. I canât imagine the transition from the harsh and unforgiving Zendikar to the storybook-esque and somewhat goofy world of Lorwyn was an easy one to handle. Can you imagine trying to make sense of that world if you were Nissa? I am surprised she did not go insane. Timeline will again be crucial in this fated planeswalk, as we are âin the knowâ and are aware of Lorwynâs dark secret. The plane has a naturally-occurring phenomenon known as the great aurora, a magical shift that transforms the sunny and painterly Lorwyn into the dark and twisted Shadowmoor. Will Nissaâs first planeswalk be to the storybook Lorwyn or its umbral twin? Will she experience both worlds? I don't know about you, but I am excited to find out. 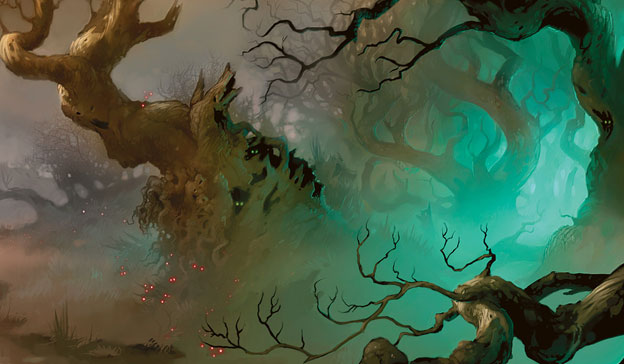 I hope you enjoyed this refresher on the five Planeswalkers we will be going on a journey with in Magic Origins. I am a huge fan of origin stories like Batman Begins and the first Iron Man movie, as they provide fantastic ways to illustrate a character and what makes him or her tick. Magic is unique in that its settings are as much characters as the Planeswalkers encountering them, and I for one cannot wait to see how these different worlds helped shape our heroes as we know them today.