The old man welcomes your entrance with a stern nod. It is clear that he has not forgotten your attitude and manner from your last visit. Not wanting to anger him any further, you assume your best interested-student face and quietly move to the rug. Seemingly intent on making his displeasure obvious, the old man says nothing as he continues with his books.

Trying hard to show that you are a willing and engaged student, you do your best at keeping your attention focused on the old man. You avoid letting your gaze wander to other parts of the room, and you occupy yourself with thoughts regarding what the books on his desk could contain. After what seems like an hour, but was most likely a few minutes, the old man turns to you.

If you come to my study without a true desire to learn, I will halt your education permanently.

The old manâs face is grimly set. Itâs been months since you have seen him this upset, and his seriousness frightens you. While you are still unsure about the usefulness of the âeducationâ he refers to, you do not wish for him to stop. You are caught up in the old manâs fairytales, and you wish to know more about the fantastical things he has shown you over the past two years.

While you think about what the old man has said, he turns away for a moment. When he faces you again, a deep red book sits in his hands. The color is not of blood, but closer to dark and dirty rust. A kindly smile sits on his face, erasing the tension that had existed a moment earlier.

Iâve forgotten small pieces of Taysirâs later life, but this compilation should help me complete the planeswalkerâs tale. When you last came to me, I ended with the parting of Taysir and Kristina. I also mentioned Ravidel. It is necessary that I begin with Ravidel today.

Before their separation and before the casting of the World Spell, eliminating the Shardâs boundaries, Taysir and Kristina joined a gathering of planeswalkers for the Summit of the Null Moon. If you care to remember my tale on Ravidel, you would remember that he was also present at the Summit. During a betrayal by his master Faralyn, Ravidel was killed, but he was then revived by Taysir and Kristina. Ravidelâs spark triggered during the process, but his fury at Chromium Rhuellâs death carried him away from those who might teach him the path of a âwalker. 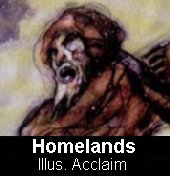 I remind you of all this because Ravidel still held that day close to his heart when Taysir sought him out. Though Ravidel did not take his anger out on Taysir directly, he was certainly not passive against those he felt were responsible for his friendâs death. In his bitterness over Kristina, Taysir remained unaware of Ravidelâs hidden motives.

The old man pauses for a moment, looking directly at you.

Know that the rest of Taysirâs life could take days to retell, but I am shortening it for you. In fact, much of this volume recounts the events of his life beyond what I have already told you. He was among the most powerful men to ever walk the planes, and the tales about him are numerous.

Now then, back to my tale. Taysir saw his fostering of Ravidel as a benevolent act that would keep his mind distracted from thoughts of Kristina and Rabiah, but Ravidel saw it quite differently. While Ravidel was interested in learning the full breadth of his powers, he seized the opportunity for revenge, and that revenge started with Taysir.

Ravidel played on Taysirâs desire to return to Rabiah, slowly driving the powerful planeswalker toward the brink of madness. Whenever the opportunity arose, Ravidel made sure to mention possible methods of restoring a path to Rabiah. He had not forgotten those who escaped the Summit, and he often reminded Taysir that punishing them would not be looked upon with distaste by any but those with the strongest of morals.

âAll you have to do is snuff out the life of a troublesome planeswalker. That would give you the power you seek to return. Thereâs nothing wrong with punishing those that deserve it while using the opportunity for your own ends.â

Taysir resisted these thoughts for decades, but he was mentally weakened by the departure of Kristina. Eventually, he succumbed to his pupilâs suggestions, though never fully. Taysir hunted down Leshrac, one of Chromiumâs killers, but could not bring himself to murder a fellow planeswalker. In the end, he imprisoned Leshrac on Phyrexia through a method none have been able to duplicate.

Soon after, Ravidel finally found information his master could not overlook with indifference; Kristina had found a new lover in the form of the minotaur planeswalker Sandruu. Enraged, Taysir confronted the two. Sandruu, fearing for his life, fled to his home world of Ulgrotha, but Taysir merely followed. The battle that ensued was massive, though fairly one-sided, and it ended with Sandruu being banished to a far-away plane Taysir hoped would take a millennium to reappear from.

Blinded by his anger, Taysir was unaware of his surroundings, and he soon found himself dueling the planeswalker Feroz, sworn to protect Ulgrotha from outside âwalkers. Startled, caught off guard, and not ready for another fight, Taysir was unable to defend himself. It cost him his life as Feroz cut him down with a broadsword. 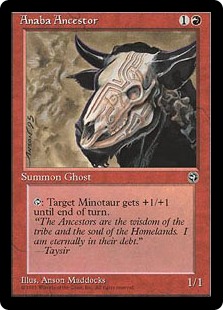 But that is not the end of my tale. Planeswalkers were powerful beyond imagining back thenânot like the current crop of sproutsâand Taysir was one of the strongest. When his body died, he harnessed the power of Ulgrotha to keep his spirit alive. I canât imagine to what purpose he thought this would save him, but help came from an extremely unlikely sourceâthe Anaba minotaurs.

I call them unlikely because, just before his death, Taysir managed to destroy much of their ancestral home. Yet, their culture and ideas are far removed from those we know. They witnessed the wrath and turbulence pouring out of the planeswalker, but they understood it was not his true nature. The Anaba believed the spirit of Taysir could prove to be a powerful ally, and they set about calming him.

Unready to dive back into the multiverse, Taysir took a localâand newly ascendedâplaneswalker named Daria under his wing. Their relationship was formed with trust and love, unlike Taysirâs tutelage of Ravidel. The two grew as close as a natural father and daughter, and they eventually made their way into the multiverse together. 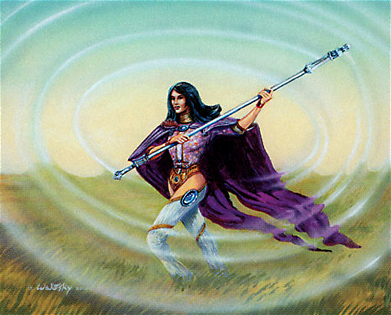 Over the years, Taysir once again took on challenges and positions within the multiverse, but I do not have the time today to describe all of these adventures. What you should remember is that he had started life anew once again, and he savored every moment of it.

As all tragedies do, however, Taysirâs life ended with a sad final act. He was recruited by Urza to join the Nine Titans, a consolidation of planeswalkers formed with the sole purpose of destroying Phyrexia, and Taysir brought Daria along so that she was not far out of his sight. Iâve told you of what happened once the Invasion commenced, but perhaps you will see it with new eyes.

Tevesh Szat, one of the betrayers at the Summit of the Null Moon so long ago, once again turned on his fellow âwalkers. The mad planeswalker murdered Kristina and Daria, the two people who meant the most to Taysir through his long millennia of life, before being dispatched by Urza. After the chaos subsided, Urza admitted to knowing of the betrayal in advance. Taysir, filled with righteous rage and anguish over his loss, attacked the mastermind behind Dominariaâs defense. The artificer simply activated a hidden self-destruct mechanism within Taysirâs titan suit and erased Taysir from the multiverse.

The old man pauses for a moment before ending his tale.

The death of Taysir was a sad and abrupt one, but he lived a long and plentiful life. Like all beings with power, he abused it and followed the wrong path at times, but in the end, he fought for what he felt was right. I like to imagine that his spirit is back on Ulgrotha with Daria, sated and happy.

The old man finally finishes and turns away, but not before you glimpse a strange look in his eyes. For a second, you wonder if it is tears, but whatever it is, it is something you have never seen from the old man before. As you get up to leave, you canât help but sense that some deep connection exists between Issar Roon and Taysir.