Welcome to the second part of the Commander 2019 week here at Coolstuffinc! It seemed a little curious that the editorial staff have chosen to feature the Primal Genesis deck (that's the Populate deck for everyone else!) on the second day since it is so evidently the best deck of the bunch! This isn't a slam on the other decks; they are all solid decks and I'll be buying all of them. However, look at the facts. It makes tokens! We aren't just talking Saproling tokens either. When the commander's 4/4 Rhino tokens with trample are a little dull in comparison to the others the deck makes, you know you are in for something special.

But it doesn't stop there! Once it starts making tokens, it starts copying those tokens! So many different tokens! Tokens you didn't ever expect to see! I love decks that do this and this one does that in spades!

What I'm going to do here is go through a few of the cards that look like a ton of fun. No not all of them since I don't intend to leave you with a book to read, but I'll look a few of the new cards and a few of the old ones that really make this deck shine! Then we'll look at a few cards that I'd add to the deck and a little suggestion to make the deck just a little more fun at the end.

Atla Palani, Nest Tender: This might just be my favorite card in the set! A ton of flavor with Egg tokens cracking and becoming something else. Add to that the options Atla offers to the deck-builders. I have a 60-card Polymorph deck that runs only three particularly nasty creatures and several ways to make token creatures. The deck is great fun and changes frequently as the creatures in the deck constantly change so no one really knows what will hit the table! I could spend an entire article talking about this card and you can expect me to do that over the coming weeks!

Ghired's Belligerence / Full Flowering: I put these two together because they do the same thing. They are both sorcery speed spells that allow you to Populate multiple times. Realistically, I think I would want to spend seven mana to cast either of them. With Full Flowering that lets me Populate three times. With Ghired's Belligerence, that gives me five damage. Assuming I want to Populate many times, it shouldn't be too hard in a game with four players to find some 1- and 2-toughness creatures to kill. One tokens player is often all it will take to let you Populate five times. With 2 toughness creatures, you'll be able to Populate twice and possibly a third time with the right 1/1 creature out there. Full Flowering offers reliability, while Ghired's Belligerence relies on your opponents to play along. I don't know which is better, but I look forward to finding out!

Idol of Oblivion: Ignore the 10/10 Eldrazi token for this card. Just don't do it. If the ability wasn't on this card it would be just as good since using it up to make a single token when you can tap it every turn to draw a card is so much better! I like it with Seedborn Muse and Dragon Broodmother, but there isn't a reason to go even that far. Adding another card to your hand every turn is outstanding. Virtually every deck that makes tokens has multiple cards that can make tokens every turn. Assemble the Legion, Awakening Zone, Bitterblossom, Breeding Pit, Tombstone Stairwell, and Night Soil are just scratching the surface.

Garruk, Primal Hunter: Just look at this card and you understand why it is in this deck, right!? 3/3 Beast tokens, card draw, and the chance at a pile of 6/6 Wurm tokens! This works at every level! While that is true, let me slow your roll for a minute. Barring a Doubling Season, your opponents aren't going to let you reach that six loyalty, so just ignore that. There are better, more cost-effective ways to get a 3/3 token. In reality, Garruk might be a planeswalker, but this card is a five-mana sorcery that lets you draw cards. Don't get me wrong, I'm not suggesting this isn't a good card. Garruk, Primal Hunter is an amazing card, but just understand that this is a card draw spell. Don't mess around with 3/3 counters when you are likely able to just use it to draw six or more cards right off.

Mimic Vat: The Vat and cards like it are what make token decks so interesting. If I'm only ever making tokens from my stuff, I'll be making the same token again and again. That makes repeated games with the deck a little boring. If I can make tokens from my opponent's cards, that is a whole other story! Suddenly things are always different. There are different lines of play and different ways to win. I love variety in my decks and Mimic Vat brings that.

Arcane Signet: This card is coming in the Brawl decks. We were told this over a month ago. I've already discussed the card. I was hoping it would be in the Commander decks, since we know Commander players are going to want the card, but I didn't expect it since it can drive sales of the Brawl decks among Commander players. When it comes out, add it to this deck. A two-mana artifact that can tap for any of the colors you would need. Get used to hearing me say that about an awful lot of decks.

Command Beacon: This deck works best with the commander in play, doing its thing. The commander also costs five mana, so once it is killed it will start to cost seven and nine mana. For a deck running Green, that is less of an issue, but wouldn't you rather use that mana to cast another card? Command Beacon would be a big help.

Bountiful Promenade / Spire Garden: These enter the battlefield untapped and tap for two different colors of mana. They just belong in your decks.

Helm of the Host: I've loved this equipment in decks since it came out. The token created can copy a legendary creature. It has haste, it doesn't leave at the end of combat or the end of turn. The real tricky part is that neither the token, nor the equipped creature have to attack. I can't wait to make an Atla Palani token then tap both of them to make two Eggs tokens. Using Helm of the Host on a Mimic Vat token means that the Helm token isn't exiled at the end of the turn! I want to Populate weird and different stuff, and Helm of the Host helps that happen.

Blade of Selves: Blade of Selves doesn't make nonlegendary copies of creatures. Blade of Selves tokens are only alive while attacking; they are exiled at the end of combat. These are real restrictions. However, you get multiple copies. If you are copying a creature with enter the battlefield triggers, you are scoring big. You also want to be sure that you can Populate during combat. You'll create a token that isn't attacking and is ready to keep working long after the Blade of Selves tokens disappear In spite of the restrictions, I love how this card works so well with so many cards. Wizards of the Coast has been excited to put ETB triggers on creatures for a long time. I'm sure Blade of Selves will be a star.

This deck is a ton of fun and there are plenty of ways to alter it and make it your own. I'll be bringing this to my kitchen table as soon as I can!

Blank token cards: You can find these just by searching for blank playing cards. With a few of these and a few extra fine point sharpies, you can make your own tokens on the fly. My friends gave me several of these for BruCon. The BruCon image is on the back, while Sean's Goblin art is on the front. 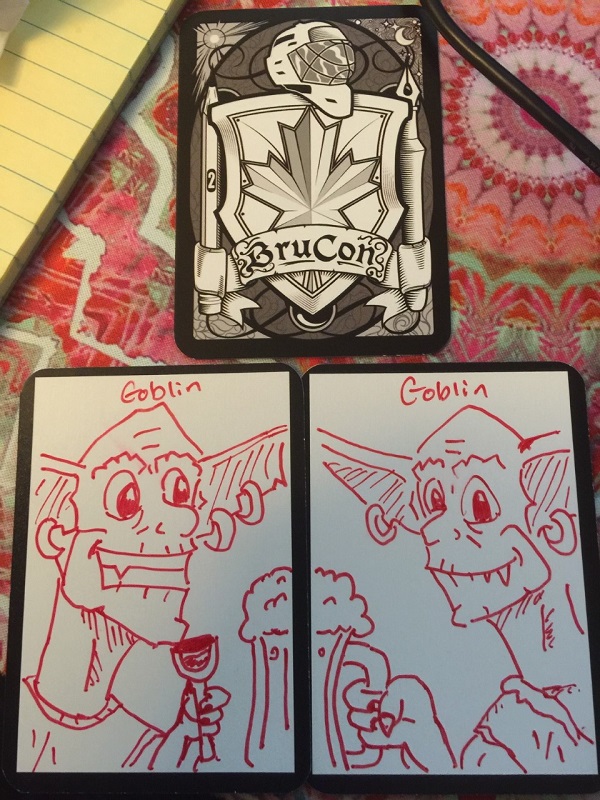 Dry Erase cards: My friend Andrew put me onto this great idea a few years ago. Get these cards along with a few fine and extra fine dry erase markers and you are set for any situation. I use these for token creatures and also for tracking commander damage, life totals or as reminders that sit on top of my library. I recommend finding the markers that come with the eraser on the top for easy cleanup, and the extra fine markers for a little more precision. 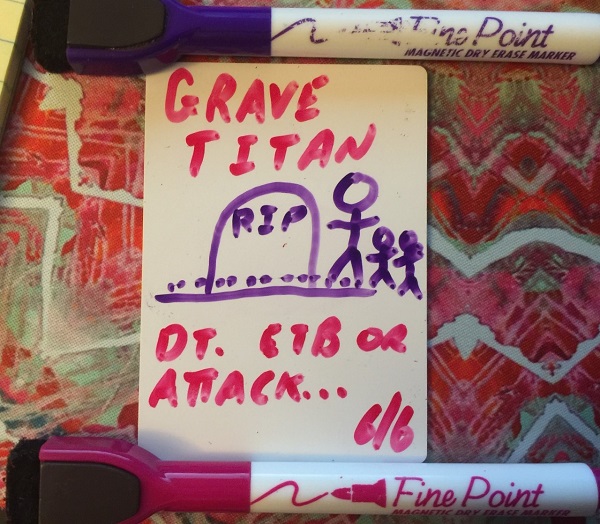