Recently, Cedric Phillips and Brad Nelson wrote articles talking about Magic coverage here and here respectively. I read them and was intrigued by their arguments, but I never really processed them until this past weekend. So, what happened this weekend that made me actually think about this in some detail? Well, I watched the Blizzard WCS European Finals (for the uninitiated, itâs a big StarCraft II event). This really was the first event where I thought the coverage was really goodâas opposed to simply okayâwhich forced me to confront the steaming pile that is Magic coverage. What I want to do this week is lay out what is done in eSports and how we can port some of that to Magic. However, itâs going to be a painful process. Next week, Iâll look at how these ideas necessitate a change in the way we view and structure Magic tournaments, and Iâll provide some suggestions of my own.

So, letâs start with eSports. The coverage for the WCS Europe event was, in my opinion, excellent. On Sunday, during the run-up to the Grand Finals, the stream for the WCS peaked at around 100,000 viewers and regularly held in the 90,000 range. From what Iâve seen in the past couple years, eSports is absolutely a thing, and itâs only going to grow. Competitive video gaming is going mainstream, carried by perhaps the two biggest phenomena in the history of videogames: StarCraft and League of Legends.

For those of you who werenât around/donât remember/never bothered to find out, hereâs the crash course in gaming history. StarCraft came out in 1998, which is an eternity ago in Internet time. Video games would never be the same. There is a misconception that Battle.net debuted with StarCraft. In fact, this is not true. Battle.net debuted with Diablo, but StarCraft is the game that gave it its legs. The ladder system, custom games, and the need for an opponent gave both Blizzardâs online service and the game itself new legs.

StarCraft was an immediate hit all over the world, but particularly in South Korea, so much so that itâs often called Koreaâs national sport in jest. StarCraft was so popular that it spawned an entire industry: eSports. For the first time, an entire competitive structure evolved surrounding a single game. Video-game tournaments were nothing new, but before, each was its own separate entity. StarCraft unified its tournaments and formed teams and leagues, becoming much like modern sports. They even have multiple dedicated television channels.

The Korean model for eSports was ported to the West with the establishment of western pro gaming circuits, including Major League Gaming (MLG) and the IGN Pro League (a video-game league sponsored by IGN entertainment). These leagues have caused the popularity of eSports to skyrocket, particularly in the past two years or so, as eSports was injected with new life in the form of two major games really getting off the ground: StarCraft II and League of Legends.

StarCraft II simply built on the success of its predecessor, but League of Legends was something entirely different. It began its life as Defense of the Ancients, which most people associated with the Warcraft III mod, and rightly so. It was there, specifically with Defense of the Ancients All-Stars, that the mod took off and became a community hit. Members of the development team for that game went on to create League of Legends and DotA 2.

Magic is older than StarCraft and significantly older than League of Legends. I also canât imagine that Magicâs player base is significantly smaller than either of these games. So, why are StarCraft, StarCraft II, and League of Legends so successful where Magic is not? How can individual streamers for StarCraft II have thousands of viewers, which is the same as some semi-major Magic events? How can daily streams like IGNâs competitions reach ten thousand viewers when the Magic Players Championship canât even top that? I know this topic has been discussed before, but being an avid fan of both the StarCraft and Magic community, I feel that I have a unique perspective to offer.

I am far more familiar with StarCraft coverage than LoL coverage, so I am going to use that from this point forward. What I want to do is go inside the booth and talk about what StarCraft casters are doing and how it helps coverage. Then, I want to port that sort of thing to Magic.

The primary function of casters is to bring the game to the audience. So, what does this mean? It means that their primary function is to point out the action and get the viewer looking in the right place. As far as StarCraft is concerned, this means talking about the following things:

This is the âplay-by-playâ part of StarCraft, but it isnât a play-by-play the same way you would see in sports. StarCraft casters donât announce everything that goes on in the game because a lot of it is stuff the viewers can determine for themselves. Magic coverage should be the same way. Magic casters need to be able to identify decisive points in games and talk about what goes into creating and resolving those points.

Casters also have other functions, however, so letâs look at some of those.

These statements give the viewer something to expect and show the general strategic flow of the game. In the same vein, casters will often talk about the significance of individual decisions and what it means for the complexion of the game. This is the primary role of casters.

Bringing It to Magic

So, what are the comparable actions as far as Magic is concerned? What do Magic casters need to be talking about?

So, what does this mean for our coverage?

First, we need to put the players at the forefront of what we are doing. Just as an example, many tournaments that feature elite players will have player introduction videos or ask players a few simple questions before the match. This sort of thing could easily be ported to Magic to increase the visibility of our own star players. 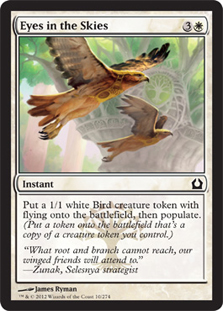 Second, we need better communication between the play area and the casting desk. In particular, this means that casters need to have access to perfect information. This includes playersâ hands, the board state, and any and all communication between the players. The play area needs to be microphoned so at least the casters can hear what the individual players are saying and the discussions that are going on. It might even be beneficial to have that on stream as well, but that may prove to be confusing. Regardless, much of Magic communication is oral, and thus, casters need to have access to that information.

Third, we need a better platform for analysis. Because there are so many subtleties in Magic play, casters need the ability to point out and go over various potential play lines in interesting situations. This means having access to a freeform way of manipulating the board stateâin other words, having an analysis board of sorts. You can see something similar if you ever look at coverage for chess events. There will be a separate board with the current position reproduced where the casters can make moves and show various play lines. Magic casters need access to similar technology.

Fourth, our casters need to be more professional. Often, I hear Magic casters talk to each other without including the audience, cracking jokes and making references. This sort of thing needs to be kept to a minimum or outright eliminated. Casters are there to do a job, and their focus should be the game at hand. Magic has a ton of down time, yes, and all that needs to be filled, but casters need to find some other way of doing so. Our game is rich beyond belief; surely thereâs something to include the audience.

Cedric is right that Magic is a very different game than StarCraft or League of Legends. His analogy comparing Magic to baseball and League of Legends to American Football is a good one. However, that doesnât mean we canât learn things from eSports casters. Their professionalism and knowledge is something that Magic coverage has not been even remotely close to, and I think that is a huge part of why no one watches the coverage. Frankly, itâs pretty bad because the casters lack knowledge and miss basic plays, and the production value is rather low.

To genuinely make changes in Magic coverage, there is a need to change more than the casters in the booth. There is a need to actually revamp the entire way we do Magic tournaments. I donât have the space to go into that this week, so Iâm going to do that next week, but suffice it to say the coverage problem points to other problems with the Magic model.

All in all, eSports has been very successful because they have chosen to view the tournament circuit not only as a form of competition, but as a business in and of itself. People have jobs and roles that are important, and they go out and do them. I believe there is room for Magic to grow in a similar manner, but Magic needs to adopt this mindset if they want this to happen. They need to treat these things as professional productions and begin looking for the talent to make it happen.