The first part of this article is here. I originally did not intend to write this, but commenter "no" raised a good point in the comment thread which I felt merited response. His main point was that this was essentially the metagame wheel (the aggro, control, mid-range thing most of us use). The full content of the comment is as follows:

"I'm a little confused. I see this as being identical to the metagame wheel. You have updated it slightly taking into account the absence of combo and aggro-control strategies, and teased out 'midrange' as a generic term into incremental and big spell flavours, which I think does a much better job of placing 'tap-out UW' for example on the metagame wheel.

Why does the metagame wheel not work?

Explaining the Circle of Predation:

I developed the Circle of Predation because the metagame wheel is basically a complete failure at forming any kind of theoretical construct to think about formats as a whole, never mind individual archetypes. Why does the metagame wheel fail? Because it doesn't provide any real information as to format constraints or deck building.

This is the basic modern metagame wheel: 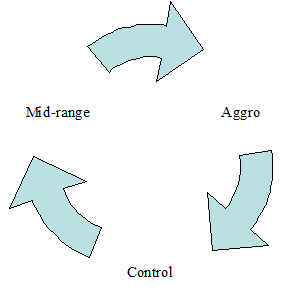 What do you learn from this? Absolutely nothing. Classifying your deck or your opponent's deck gives you no information or no new approach. You have simply labeled it. In a lot of ways this is analogous to insults. Insults are categorical labels that have very little, if any, functional and informational utility. Have you really gained anything when you call someone a "douchebag?"

Classifying a deck as an "aggro" deck or a "control" deck gives you no information on how to attack the deck or defend against it. The best thing it can do is give you guidelines on how to build decks to attack others. So you want to beat an aggro deck? You should build a mid-range deck. Still, what is a mid-range deck? How does this help your card selection? The metagame wheel leaves you on an informational island with no recourse.

This is a control deck:

This is also a control deck:

This is also a control deck:

The metagame wheel does not differentiate between these three decks. The Circle of Predation does. The first is 5-color Cascade, an Incremental Card Advantage deck. The second is Forbidian, a Counterspell deck. The third is UW Tap-out, a Big Spell deck.

The metagame wheel also fails to account for strategies like ramp decks. A ramp deck really isn't a mid-range deck, but it also isn't a control deck. It's its own separate archetype.

So let's take a look at how the Circle of Predation is designed. For reference, here it is:

So, why does this succeed where the metagame wheel fails? Simple â approach. The metagame wheel attempts to categorize decks by dividing them via their operational stages or posture. It attempts to focus on the timing of the deck and when it has its strongest game. The Circle of Predation seeks to divide decks by their fundamental strategy.

Before we go further, let's take a look at each of these strategies so you have a clear idea of what I am talking about.

The One-Drop â Decks that fall into this category have a proactive strategy that begins as soon as the game starts. They devote themselves to executing their game plan as efficiently and as quickly as possible. If they have slots remaining, then they will likely devote these to defense or disruption, but those cards are few and far between, if they exist at all. One-drop decks are simply concerned with "do you have the answer?"

The Counterspell â Counterspell decks are the classic Weissman-style control decks. They focus on trading one-for-one with you and win the game simply by having more cards. The most popular and consistent avenue to accomplish this has been blue with counterspells and card draw, because Counterspells are the most efficient form of one-for-ones.

The Big Spell â Big spell decks focus on resolving a small number of spells that have a large impact on the game. They typically do this via one of two means â accelerating into their big spells or defending themselves until they can naturally drop them.

The primary engine of this deck is cards that have multiple effects when they resolve; in general, cards that two-for-one an opponent. Cards like Murderous Redcap, Nekrataal, Bloodbraid Elf, Blightning, Primeval Titan, Obstinate Baloth, and Vengevine are excellent examples of cards that generate "value."

Let's look at how the interactions between these archetypes play out on a strategic level.

The One-Drop over the Counterspell â The main problem with decks that focus on one-for-ones, especially using counterspells, is that they have a more difficult time recovering from on-board disadvantages. Counterspells are very good at trading for value, but they have one critical weakness â they don't affect what's already on the table. One-Drop decks prey on this weakness by setting up an advantageous position before the opponent is able to start trading profitably and executing his strategy.

The Counterspell over the Big Spell â Big Spell decks are traditionally very threat-light. This is because they have to play a large number of ramp spells or defensive spells, depending on their plan. The Counterspell deck can ignore these cards for the most part, simply focusing on the cards that actually do something. Because these spells are typically expensive and there are small numbers of them, they are perfect prey for counters.

Think of this like two people playing Super Smash Brothers Brawl with the Smash Ball on as the only item. The Incremental Card Advantage deck is like a player who focuses on racking up lots of damage (ignoring the Smash Ball), then goes in for the kill when he is certain he can get it with any reasonably hard hit. The Big Spell deck is like the guy who dodges around and then goes after every Smash as soon as it shows up. The guy going after the Smash Ball can nullify all the work done by his opponent because every Smash Ball is worth a kill, which requires so much of his opponent's time and effort.

But of course, this is not the end of everything. We have to move on to hybridization now, which is part of the Standard landscape now and will be for the foreseeable future. Most archetypes can be hybridized with other archetypes. For example, most modern control decks are both Big Spell decks and Counterspell decks. Every list will rely on one angle more than the other, but the fact is that both will be present.

The most common hybridization is with "the Big Spell." Why? Because of planeswalkers. Planeswalkers, in general, are all big spells because of their ultimates, which frequently have a game-breaking effect. However, they are also all Incremental Card Advantage engines, because their abilities frequently generate small amounts of value with each use as well. Thus the fact that they serve both of these angles of attack at affordable mana costs lends itself to quite a bit of hybridization.

However, the Circle of Predation still doesn't break down, even under this hybridization. Let's take a look at two similar decks that died out â Fauna Shaman Naya and Next Level Bant. Both of these decks are Incremental Card Advantage/Big Spell decks where the "Big Spells" are the planeswalkers and finishers like Titans. The natural predator of this would be the Big Spell/Counterspell deck. That hybridization is exactly where modern control decks are, and they have successfully suppressed the Fauna Shaman decks in this metagame.

Tempo and the Circle of Predation

So how does Tempo interact with the Circle of Predation? Tempo decks, or, as some call them, aggro-control decks, focus on seizing a tempo advantage early then defending it from disruption. They fall under two major categories:

Threat defense decks, on the other hand, actively defend their threats. In other words, Threat Defense decks confront your spells head-on. The most common avenue to accomplish this is counterspells, but it is followed closely by discard. Both of these card types form an active defense against attempts to neutralize whatever threats the tempo deck presents. Counterspells stop problematic defensive spells from resolving and discard removes the opponent's option to cast them.

Tempo decks are, in general, bad against more aggressive One-Drop decks because One-Drop decks are more efficient at seizing early tempo advantages. Because they do not worry about defending their threats (the One-Drop philosophy is to simply replace the threat), they don't have to play spells that don't give them tempo. Thus, when you combine this fact with the fact that they are better at seizing early tempo advantages than Tempo decks, you get a very lopsided match-up. This is exactly why, in Legacy, the Merfolk vs. Zoo match-up is so lopsided.

So why does why the metagame wheel not work? Simply because it doesn't provide any useful information. All it does is label decks without a purpose.

The Circle of Predation is simply a better way of viewing metagames and formats, largely because it divides decks on the best ground possible â their fundamental strategy. By doing this, it presents insights as to the fundamental strengths and weaknesses of any given archetype, even if you have never seen it or played against it.