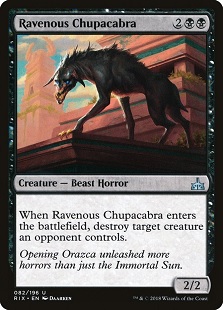 Patrick Sullivan's famous and justified rant on this card notwithstanding, in a vacuum, it's as clean as this ef-fect has ever been. The overabundance of crazy enters the battlefield abilities in current development has put this card in perspective. Nekrataal is its primary historical comparison, and though its first strike and extra red tape on what it can kill (nonartifact, nonblack) can sometimes make for interesting gameplay moments, it's obviously just a less clean design.

Chupacabra could've been a 2/1 or a 1/1 with a more relevant creature type (Zombie or whatever), but hon-estly, for as much as this card gets hated because of the exact time and space we were first exposed to it, the card itself is an excellent and reasonable Magic design. That we got this card as late in Magic as we did really speaks to how many good and reasonable Magic card ideas were skipped over on our way toward the flowchart designs of today. In fact, "cards we can't be-lieve arrived to Magic so late" may well be today's subtheme. Let's find out! 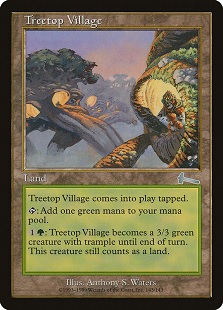 Worldwake was mostly an Un-set in disguise from a development standpoint, so you have to go way back to get the right way to do this. If you get to Stalking Stones, turn around. You've gone too far.

Treetop Village remains the best of the original group for its ability to be relevant in virtually any game, no matter which turn it is, without ever feeling oppressive or unreasonable. I mean, yeah, it's a weird uncounterable 3/3, but if you kill it, hey, Stone Rain!

It makes just going into combat interesting (think Cryptic Command) and it can be used to blow-out players not on their toes with their single target spells (think Primal Command).

It turns into an Ape too. So that's cool. 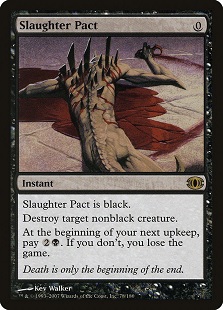 Now that is some interesting and safe design innovation. You see, it can be done!

This spell is restrictive, like the fine print on the proverbial contract. The whole thing is thematic and of the cycle, Slaughter Pact wins for its most reasonable rate (if printed now, Slaughter Pact would have a negative mana cost) and its ability to be more its own color zone than the others.

It is technically a "free" spell, which usually causes problems, but refer to The Tasigur Rule established later on in this very article to understand precisely why Slaughter Pact gets away with it. 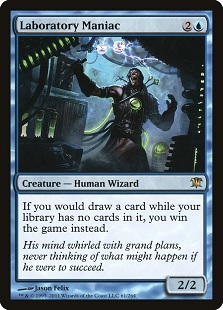 Shuffling all the time isn't optimal because it slows Magic down, as we've found out a number of times throughout history, but it's good to be able to cast your spells and build cool decks. These are the ultimate Limited format lynchpin, and I hope we see them for the rest of time. 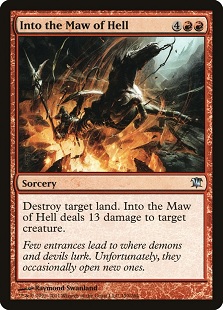 A big silly land destruction spell is usually last-pick draft dust, but Innistrad has themes to ex-press, see. What should have been another filler slot that had far outgrown its original use, even for 2011, emerged as a strange hybrid of balanced Limited removal, Commander playable two-for-one, and evocative storytelling/worldbuilding. Wrecking Ball's simplicity cannot compete with that.

Innistrad is good, if I haven't made that clear. 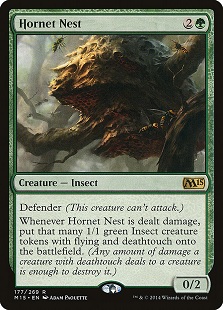 The epitome of interesting token design. The possibilities that appear in a player's head when this card is read are the big key here. What other cards can do that? ("The good ones" is the correct answer.) 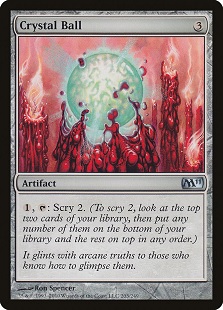 Scry going perennial in Magic 2011 opened up a lot of natural space for rules text. The greatest example was this artifact, a card that feels so inherently evocative to the classic idea of Magic: the Gathering that it feels like it somehow had to have existed since forever. Scry changes the quality and relative value of so many elements and forks Magic games in many divergent direc-tions; it's an ability that deserves a sort of champion card that's this pleasant. 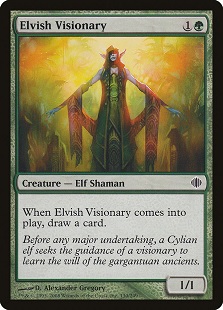 This is another card where it's hard to imagine that it came as late to the game as it did. It feels at home in Limited, Legacy, Standard, Pauper... it's both a straight-faced and easy-to-understand creature card, as well as an innocuously dangerous combo cornerstone. Countless Limited games were determined by the forgotten bluffed one damage that the little thing does on top of everything else.

A lot of cards I've favored for distinction on this list have been extremely clean and elegant. Tasigur, the Golden Fang does have a lot of text, and delve isn't the kind of ability that gets a lot of benefit of the doubt; however, Tasigur saves himself by having a defining activated ability so unbelievably engaging and collectively involved that its seamless connection with his costing mechanic works to excellent effect.

We'll end this week on what we'll coin The Tasigur Rule:

Individual cards containing abilities that are poorly developed, at large, can be so well-designed that the greater errors of development can disappear.

The finish line awaits us.