This week would've been a decent week to take a break from the best Magic card designs ever countdown to contemplate some problems. Unfortunately, they're so predictable that we can practical-ly sing along at this point, and so I wrote about it already.

When you can't count on the fed, it's up to you and yours to make Magic your own. Cre-ate and be independent.

The last installment is located here. From there, you can hyperlink all the way back to the beginning if you like. When you're caught up, we'll get going. 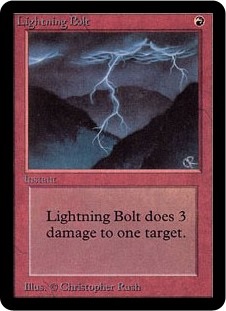 Hear that? That's the sound of brackets busting everywhere.

So what's the issue? Why isn't Lightning Bolt way up in the single digits? Does it not speak vol-umes that every other card on the countdown gets some celebratory insight, whereas Lightning Bolt gets validation on its underachievement in the eyes of a handsome and smart Magic writer? Well, honestly no, because anybody who plays Magic sees Lightning Bolt as basically the most intuitive card imaginable. Powerful, simple, applicable throughout various stages. What's the issue here?

Well, for starters, the entire cycle it's apart of is all out of whack. All those numbers would have been better at straight two, rather than three. Relative to sustainable creature sizing and twenty life to start with, three damage for one mana just seems off the mark. You have to give Healing Salve more of a Harm's Way vibe, but obviously Ancestral Recall is the pinnacle of card lunacy. So that's something.

The real beef with Bolt, though, is what it tells us about the silly circles the game's managers go in sometimes. Look up there, at the Alpha version of the card. That's pretty close to the current wording, but in between Fourth Edition and recently, the wording changes. Planeswalkers are messy, and they mess up a lot of clean designs. As it turns out, this one was more right on template originally than it was in all the years in between.

For the card to go in some other word directions, only to end up having to revert back to its OG because some of the game interactions got so sloppy is pretty sad. But yeah, it's still a resonant card that does Magic games a lot of good. But oh what ridiculous things there are in its historical margins.

44. Quest for the Gravelord 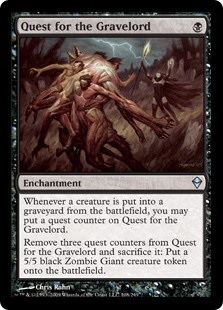 During a time when Magic story was becoming more important to how sets and products get presented, Zendikar found itself unlocking a ton of narrative potential in cards themselves. Using labels on counters basically let you tell whatever story you want, but the best designs are the ones that tell intuitive stories, rather than convoluted ones. I feel like of all the quests, this one has the most interest-ing things to say about what Magic cards can do and say in various game states. 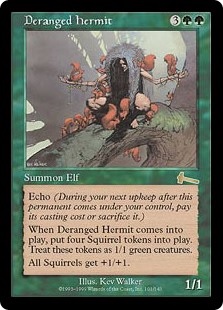 Echo is weird, but I mean, tokens are that good. If I had something more interesting to say than "tokens," I'd say it. Siege-Gang Commander and like half of Odyssey come from this. 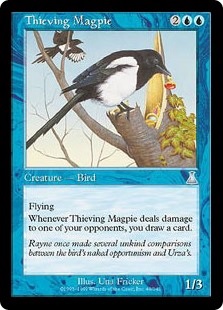 The celebrated Ophidian variants are a strange case. In the present, most of the baseline com-petitive creatures are Ophidian types, except getting the card again and again basically takes the superhuman strategy of "casting something."

Ophidian's subtle patterns were fun, but they also had all that weird extra design text. Ugly.

Thieving Magpie is the "fixed" Ophidian. It's still a celebrated card in its simplicity and effective concept. It's very in the realm of the kind of card that conveys both its game language and its story language in a minimalist way. Most good variations on this are either derivative of Magpie or are clunki-er versions.

Four mana asks the world now, and Magpie isn't the world, but I don't think it's a better place. Things were better when the Magpies flew.

Some cards with good and clever intentions don't sit in the right way. Triskaidekaphobia is really conceptually neat, but it's also a card where the gag is over basically right as you understand it. After that, it's just a bunch of text hanging out near your Magic game.

A thicker conceptualization of a formalistic concept is this crazy Sphinx card. I'll spare you the gimmick expla-nation if it hasn't already been enforced upon you elsewhere, but either way, fun stuff.

Putting a concept like this on a "living, breathing" creature makes it feel more alive than as a wooden, mostly unplayable enchantment. In general, the more Magic cards that care about their concepts but only in healthy amounts, the better off we'll all be. 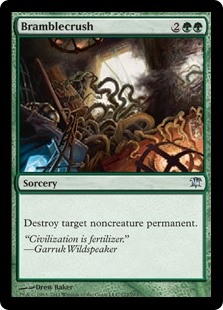 Hey, they don't all have to be flashy.

Bramblecrush has a boatload of flexibility at a time when the game really, really needs more swings toward fair mana cost pricing and simple cards that do more. Bramblecrush isn't main-deckable in most Limited formats, so it may not be the true execution of this hypothetical card we need ac-cess to, but for a digestible card to be so flexible is an excellent thing.

Someday, this will cost two mana and we'll all pretend it's what makes us happy. 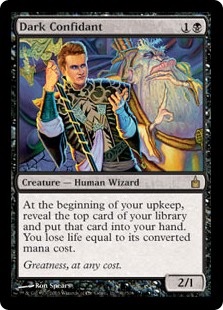 For a while, this was considered the most competitive creature in the game, but it was rarely if ever be-moaned. How the hell does that happen? Stoneforge Mystic and Snapcaster Mage are legit asking.

The key is that this card epitomized something about the tournament Magic player men-tality that no other card had captured in this meta way before, maybe since. Watching your opponent out-card you with it was rationally a death sentence, but the experience of it never was. Every card, land or not, revealed some new information and gave you some new advantage in the margins of the game. It also meant that you got to recalculate what you needed to win via life loss.

But more than the really intuitive and hidden joy in this card's experience is the empathy factor. Tournament players see Dark Confidant, they see that flavor text, and they know that whether they win or lose, they're trying to prove themselves against someone that's playing the same card game for the same reasons. They like this game. They want to be great at it.