Casual multiplayer games run long, especially in Commander. Youâll have to answer a lot of threats over the course of a game. Of course, recursion also becomes stronger because youâll have a variety of options from all your threats that have been destroyed. In turn, graveyard hate becomes more powerful to combat your opponentsâ recursion engines.

Why do I bring this up? Because today, I have a preview card that can be removal, recursion, or graveyard hate. Heck, it can do all three and still win a fight with a Baneslayer Angel at the end of the day.

Say âhelloâ to the number one card from Return to Ravnica, Angel of Serenity. 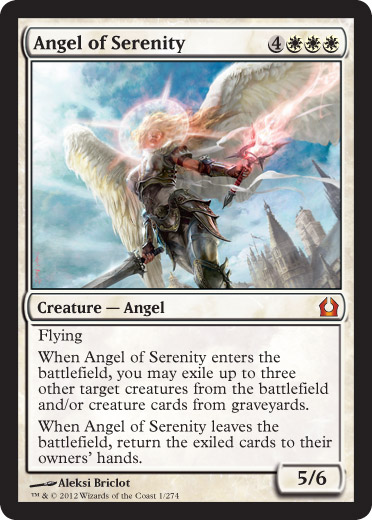 This card is a little bit insane. Itâs hard to evaluate because thereâs nothing quite like it.

Itâs obviously a riff on whiteâs Journey to Nowhere mechanic, the easiest comparison being to Admonition Angel. However, in addition to hitting three targets immediately on entering the battlefield, it has two unusual twists on the ability.

First, it returns the targeted permanents to hand instead of the battlefield when it dies. This makes it a bit better as removal, meaning even if Angel of Serenity is killed immediately, your opponent still has to spend mana to rebuild his board position.

The other feature is that you can target cards in graveyards, either as temporary graveyard hate or as recursion for when the Angel dies. Itâs a bit risky to target your opponentâs threats, but Iâd be pretty happy to hit things like Genesis and Glory. Even if the Angel dies, your opponent will have to do some work to put those cards back into his graveyard.

While Angel of Serenityâs versatility is its strongest attribute, I suspect I will most often be targeting some combination of my opponentâs creatures in play and creature cards in my graveyard. This combination gives you some Oblivion Ringâstyle removal that refunds you creatures of your own even if itâs destroyed. I hear generating tempo and card advantage at the same time is pretty good.

Building with Angel of Serenity

I suspect that our Angel will see most of its Constructed play in Commander, but it could be a good top-end card in sixty-card casual formats. Check out this little brew:

The deck has a multiplayer-friendly strategy of mana ramp, card advantage, and a bit of defenseness and life-gain. You have some weenies that can beat down early and a powerful late game between Reveillark, Emeria, the Sky Ruin, and Angel of Serenity.

Angel of Serenity does some pretty crazy things with Momentary Blink. If you make it up to 9 mana (or have Emeria, the Sky Ruin going), you can Blink the Angel in response to its trigger to exile three objects permanently, then come back and exile three more. Or you can target three creatures in your graveyard, Blink the Angel to bring them back immediately, and hit three of your opponentsâ creatures. Or you can go really deep with plays like exiling three opposing creatures, Blinking the Angel to exile some cards out of your graveyard when opponents try to remove it, and then flashing back Momentary Blink to return your creatures back to hand and exile the creatures your opponentâs replay. Value!

As a bonus feature, hereâs the Commander deck Iâll be fitting Angel of Serenity into. What do you think I should cut for it?

Iâm incredibly excited about Return to Ravnica, and am overjoyed that I was able to introduce you to a part of it. I hope youâre looking forward to it as much as I am!

Join me next week when I take a serious look at our new guildmaster overlords!