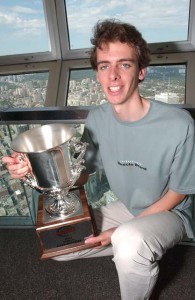 When I first got into competitive magic it was right after the world championships that year. I won't bother searching out the exact year but Tom van de Logt had just piloted Machinehead to the title. For those of you who are unaware, Machinehead essentially took the best red and black cards and piled them into a sixty card list. Machinehead did everything that red and black do best, pump quick mana out, blow stuff up and swing with some big guys. When feeling saucy it would also pick off smaller guys and send some big burn straight to the dome.

In EDH red and black lose a little bit of that quick mana acceleration. Without the redundancy of being able to run multiple copies of the various ritual effects explosive mana simply isn't as explosive as we want it to be. Fortunately, blowing things up and sending burn to faces never really goes out of style. When coupled with some discard and great multiplayer effects and red and black actually end up bringing quite a bit to the group game. Let's take a look at the staple cards if you want to run a machinehead EDH list.

Red has fewer staple cards than black, so that's where I'd like to begin. Red creatures don't often fit the bill of being terrifying the way other colors do. There are precious few exceptions and we're going to list them here. The biggest, baddest creature in the red lexicon must be Akroma, Angle of Fury. She can't be countered and targeted by most of the relevant removal in the format and even better, she morphs! The next biggest creature, and one who spreads the love around the table is Bogardan Hellkite. Hellkite gets flashed into play, rips apart board positions, sometimes sending damage straight to the face, and then might even get a swing in! Next up we have the precursor to Bogardan Hellkite, Flametongue Kavu. Oh FTK, how I've missed you picking my opponents fliers out of the sky! Flametongue Kavu is one of the most efficient and feared creatures of all time and needs to be included in our list. Next up we have the creature that happens to play very nicely with FTK and Hellkite, Kiki-Jiki, Mirror Breaker. Kiki-Jiki clones every turn and hastily too! He makes every creature we have literally twice as efficient.

Up next we have a pair of goblins that love to work with others. Siege-Gang Commander pairs nicely with Kiki-Jiki and any other goblin you can find. This means he also goes hand in hand with Squee, Goblin Nabob, making for some expensive, but reusable damage. Additionally, Squee is great to use with the tutor package green has to offer (if you should decide to head that direction). On the topic of reusable creatures, Anger thrives from being in the graveyard and Skarrgan Firebird can make for a large headache (as can his newer comrade, Magma Phoenix). Finally, we round out the list with some fantastic tutoring/multiplayer cards, Godo, Bandit Warlord, Heartless Hidetsugu, and Kazuul, Tyrant of the Cliffs.

The next section is removal. Red has quite a bit of removal/disruption, in fact that's probably red's biggest strength. Earthquake and Shattering Spree are both fantastic at getting rid of massive amounts of permanents for little mana investment. The same goes for Chain Reaction (take that tokens!) and Starstorm, with the storm having the added bonus of being an instant. If you still need to get rid of some pesky permanents then there's always Jiwari, the Earth Aflame who can even bring a modest beatdown if need be. Finally, if you're looking for removal that can also act as a finisher there's Comet Storm, the newest, sauciest fireball variant.

If you're in the mood to just be a jerk then there are two options we should explore, but I don't necessarily endorse. The first is Wildfire. Wildfire has a nice symmetric effect, angering all of your opponents equally. It's good for getting rid of most creatures, and a few problematic lands as well. Like I said, you have to be careful though, you're probably going to have a nice target on your head. The same goes for Destructive Force. The force is the new kid on the block, but it's all been done before.

Next I'd like to mention some fun utility cards. Fork, Wild Ricochet and Reiterate are all staples when I play EDH. There's nothing quite as fun as copying something devastating and sending it right back at my opponent. That being said, Reverberate needs to be included now too. Nothing like a functional reprint to make things more fun. Speaking of utility, it's often overshadowed by the more effective commands, but Incendiary Command is nothing but fun and effective. While I'm at it, there's nothing more efficient than being able to get multiple uses out of your cards and Recoup lets you do just that. Finally, Wild Evocation seems like a random fun card to pile into red decks from here on out.

There are three final cards I want to add to the list, but don't seem to fit appropriately anywhere else, so they can have their own category. I have the firm belief that Chandra Nalaar should go in every red EDH deck. Her abilities are always relevant and if her ultimate occurs then she completely decimates someone's board position. The next two cards go together but they're extremely problematic. Blood Moon and Magus of the Moon are great mono red EDH cards, but if you plan on splashing another color they can severely impair your ability to do so. Again, you risk putting a target on your head when you run cards like those in your deck, but sometimes they're just too powerful not to be used.

Black is a mainstay in my EDH decks. It does so many things so effectively that it's hard for me to justify not running it. In fact, I've shown my love of black EDH cards on several occasions (Maga!) The first and best thing that black brings to the table is an unparalleled ability to tutor up cards. Demonic Tutor, Vampiric Tutor, Diabolic Tutor, and Beseech the Queen are all automatic inclusions. They have all been printed multiple times and in the case of Demonic was also in a duel deck, making it even more readily available. Two tutors that are often overlooked are Cruel Tutor (not the one from starter), and Demonic Collusion. Collusion has buyback so it can be a fantastic outlet for those excess lands late game, and Cruel Tutor is just another vampiric variant at a smaller dollar investment. For what it's worth I also run Grim Tutor, though I'm not sure if I would necessarily call it a staple as the price can be a pretty severe cost of entry barrier.

Once we've gone past the tutors we come to the next thing black does well, draw cards. Blue is the undisputed king of card draw, but black is a good second. Sign in Blood is a great standard for card drawing as it also has the ability to finish off low life opponents. Night's Whisper should also be mentioned as it's a slightly more splashable version of Sign in Blood. There is something to be said for Necropotence, but be aware that it is another of those cards which will put a target on you quickly. Ambition's Cost and Ancient Craving continue the trend of one life for one card at a reasonable mana cost, though neither does it quite as effectively as Promise of Power, which has the added benefit of being able to put an extra beater on the battlefield. As my last recommendation for card drawing we have the fairly innocent seeming Phyrexian Arena. The arena is just as effective in the long run as necro, but seems to avoid that whole instant destroy/target syndrome.

Next we have black's other staple, creature destruction. While white has mostly cornered the market for mass destruction black has made strides along the way. Mutilate and Damnation are certainly fantastic at destroying entire fields full of creatures. Coupled with Plague Wind and the devastating Decree of Pain, black as more than a few ways to destroy mass creatures. If less destruction is more to your liking then black also has Barter in Blood and Innocent Blood, both of which happen to be the ever important sacrifice instead of destroy. Finally, black has some great cheap removal in the form of Shriekmaw and Hero's Demise. There's nothing more effective at killing generals than Hero's Demise!

Wrapping up our black staples we have two powerful planeswalkers and a few fun utility pieces. Liliana Vess and Sorin Markov are both absolutely absurd sources of powerful reusable card advantage. If either manages to use their ultimate ability then the game is going to end in very short order. We also have Syphon Mind and Myojin of Night's Reach. Both are fantastic card advantage items, simultaneously destroying hands while maintaining, or in some cases rebuilding yours. Last but not least we have three great utility creatures. Kagemaro, First to Suffer is a walking Mutilate and that's just too good for us not to run. Helping Kagemaro out in the beater arena we also have Ink-Eyes, Servant of Oni. She's one of my favorite cards and I love reanimating and ninjitsuing her into play. Finally, we have Undead Gladiator. The gladiator gives us a reliable three damage per turn and an excellent use for any excess lands in the late game.

And with that we've come to the end of our red and black staples for EDH. There are a few more cards that could be noted for each color, but just don't feel like they go in every deck. Some of the favorites (Greater Gargadon, Insurrection, Meltdown) were just a little too single minded for my liking. However, don't let this list fool you, if your metagame is different/silly then those cards might be just what you need in every deck!

Join me next week when we take a look at the blue and artifact staples. I'll try (it's a big list!) to cut it down to the bare essentials. Until next time this is Ben McDole giving you a hundred reasons to play magic!