Oh, baby. War of the Spark is coming, and while I'll have some new brews for you once more cards have been revealed, there are quite a few spicy numbers trickling in that I want to talk about today!

Let's start with one of the main mythics of the set.

First things first. As I discussed on YouTube and we now know for certain, this set actually has uncommon and rare Planeswalkers, the latter of which we haven't seen since Lorwyn, and the former I thought was impossible! It seems that the number of abilities correlates with the rarity: uncommons have one, rares have two, and mythics have the full three.

All that being said, Liliana, Dreadhorde General is a superb mythic Planeswalker. I want to take you back for a minute to Theros Standard and how much of a house Elspeth, Sun's Champion was. Every White deck that could hit 6 mana was willing to play with the card. Well, I'm going to be so bold as to claim that Liliana has a very similar feel to the fallen heroine.

Immediately, we notice that both 'walkers cost 6 mana. Elspeth started with four loyalty, while Liliana starts at a more impressive six. Both Planeswalkers have a +1 ability that adds to the board. While Elspeth's is arguably better, Liliana's is still completely fine. Both have -3 and -4 abilities that deal with threats, with Liliana's being able to get rid of creatures of any size. Two caveats here: the creatures you sacrifice to this will draw you cards, which is nuts, and being Black, you should usually be able to have some say in which creatures are "sacrificed" here, via other removal. As far as their rarely used ultimates, I think both are going to help you win the game here if you get to them.

If you're not impressed by this Liliana, that immediately ticks up to seven loyalty and passively draws you cards naturally, I implore you to reevaluate her before you're playing against her in your upcoming Standard events. 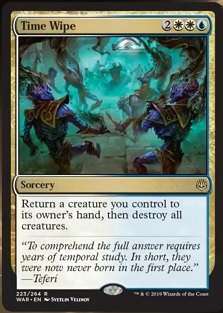 Okay, this card scares me. It's usually common for a format to have a couple copies of Wrath of God variants, so having both Kaya's Wrath and Time Wipe in the format is pretty par for the course. If anything, these are more prohibitively costed than normal Wrath effects, which is a mark against them.

Unfortunately, that's the only mark against them. One thing about Wrath of God effects, historically, is that your opponents have to play into them for them to be at their most effective; they have to over extend to give you the most value. Unless you have a creature in play, they can often avoid doing that. More specifically, if you have no creatures and they have one good one, then the onus is on you to deal with it before they deploy more threats.

This is normally the situation where the control player will play a speed bump like a Wall of Omens, that not only encourages the opponent to play more creatures, but also doesn't represent card disadvantage when it dies in the future.

What Time Wipe does is prevents any sort of card disadvantage when you play your own creature out in order to encourage the opponent to further play into your board wipe. This is just nuts. Wiping both boards and also being a two-for-two or two-for-three is usually what makes Wrath effects fair.

Assuming a board of two creatures for them and one creature for you, Time Wipe turns your average board wipe from a two-for-two into a three-for-one in the Time Wipers favor. Aside from the color restriction on the card, I'm going to go out on a limb here and say this is the best five-mana board wipe in quite some time.

Typically tutors like this are pretty terrible in Standard, and relegated to formats like Commander. Think of things like Idyllic Tutor or Three Dreams, both tutors for specific card types that are over costed and way too narrow to have any sort of competitive Constructed impact.

I don't feel this way about Ignite the Beacon.

This is a 5 mana card that essentially draws you two cards, so one card less than something like Jace's Ingenuity or Precognitive Perception, both of which were already playable. But just like Liliana, this card has two very strong things going for: this is an instant and both of the cards you're "drawing" are among the most powerful cards in the game.

Additionally, you can tutor up whichever Planeswalker you may need in a given situation. Want to kill two creatures? Grab a Liliana, Dreadhorde General. Need a threat? Grab a Dovin, Grand Arbiter orâ.â.â.â well, I guess a Liliana again! (You can get two of the same Planeswalkers if you want!) Being able to grab any two situation-specific Planeswalkers, while not having to tap out on your turn to do it, is just awesome. Historically, tutors that cost more than 2 mana and only found specific cards weren't played that heavily, but this card seems like a winner that is poised to break that mold.

In Jace we have an example of one of the rare Planeswalkers in the set. As we mentioned, he only has two abilities, but just like Liliana, he also comes with a static ability.

(Worth noting these static abilities are great and add a fantastic dimension to Planeswalkers. I've often theorized about a Planeswalker that had static text that said something like "You can activate this Planeswalker's abilities on the opponent's turn" or "You can cast your spells as if they had flash," so seeing these implemented is very exciting.)

Jace's static ability, however, has a much different role to play here than card advantage: he's basically a Laboratory Maniac! His static ability is an alternate win condition that lets you win the game if you attempt to draw when have no cards in your library. This is doubly funny because his ultimate ability, his -8, also says "you win the game." Of course, that takes place after you draw seven cards with the Planeswalker... ¯\_(?)_/¯

One thing Jace doesn't do, as only a rare Planeswalker, is protect himself. Other than his ultimate, he only has one ability, but it's a pretty good one for a four-mana planeswalker. For his +1 you can either mill yourself and draw a card, or mill the opponent and draw a card. This is especially nice if they've set up a surveil or a scry.

But honestly, the last 4 mana Jace we had required a -2 to draw cards, and most Planeswalkers that + to draw cards cost five or more mana. So despite having only one non-ultimate ability, it is a good one.

Finally, we come to an uncommon land that feels like a rare. In a dedicated Planeswalker deck, not only is this land going to gain you a million life, especially in multiples, but it's also going to help you cast every planeswalker under the sun. The mana ability on this land basically lets you turn this and any other land into Reflecting Pools for Planeswalkers, and that's pretty nuts considering that Planeswalkers are some of the most color-intensive cards in the game.

One thing to note is that Interplanar Beacon does say that you have to add mana of two different colors. So if you wanted, say, the triple Blue to cast Jace, Wielder of Mysteries, you might still have a difficult time.

Considering most Planeswalkers are double-colored, along with the benefits of stacking the life gain, I think you're going to want two of these in play to really get going. But once you have that, I think you're in good shape. Gaining anywhere from three to six life per game, just by casting your Planeswalkers and playing your lands, is a pretty good deal.

When I was deciding what previews I wanted to discuss, I had no intention of only talking about Esper cards, but here we are. In all fairness, I ended up writing about the cards that most caught my eye, and the fact that I'm more of a control player at heart that loves big, splashy spells certainly didn't help. Or maybe it did, depending on your slant!

Next week I'm looking forward to providing some initial decklists, depending on what cards show up, and whether we've seen enough tools from the new set to either impact existing archetypes, or simply create their own. Until then, I'm looking forward to seeing which cards you're all excited about in the comments, or telling me what you think of the cards I've mentioned here! Thanks as always for reading, and I'll catch you next week!