Before we get started, a big thank you to Wizards of the Coast for this free preview content!

Now, today's preview card (or character, should I say) has a pretty long and illustrious history within the game, both as a character within Magic lore, and a card within the game itself. I'm pretty excited to be showcasing him to you here, and don't forget, if you decide to preorder today's preview, or any Core Set 2020 cards, be sure to use promo code FRANK5 to get 5% off!

As a character, he was one of three planeswalkers to initially imprison the Eldrazi, along with Nahiri, the Lithomancer and Ugin, the Spirit Dragon. Like, do you know how tough the Eldrazi are? This is a huge deal. He also created Avacyn, Angel of Hope and the Helvault, those two extremely iconic pieces of Magic history. Later he banished Nahiri herself to the Helvault. He then, uh, killed Avacyn. (Hey, man, he's a Bloodlord. What do you want?) Eventually he was encased in stone himself by Nahiri. Needless to say, Sorin has had quite a journey when it comes to his Magic lore.

As a playable Magic card, nearly every iteration of Sorin has seen play in its respective Standard format. Sorin Markov was the first, and arguably the worst, but even he had his moment. Then we had Sorin, Lord of Innistrad, which was a powerhouse and still seems some fringe Modern play to this day in decks like

Tokens. Sorin, Solemn Visitor was great in the Khans Standard format. Sorin, Grim Nemesis was another gem, and heavily utilized in control decks during its time. Finally, we have Sorin, Vengeful Bloodlord, a card that has been overperforming in Standard currently, with three very relevant abilities.

While the card we're looking at today is a little more niche, a little more specific, I think he's going to stand up to the test of time in the same way previous Sorins have.

I present to you, Sorin, Imperious Bloodlord... 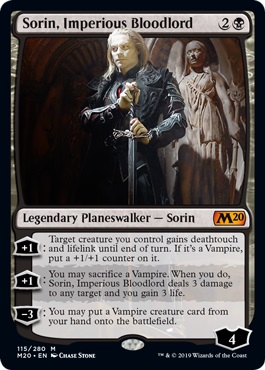 By now it should be very clear that Sorin is indeed a Bloodlord. They're really making sure we're aware of his Bloodlordlyness. Whether that's an Imperious Bloodlord, a Vengeful Bloodlord, whatever. Just remember he's a Bloodlord.

As you'll have no doubt noticed, this Sorin, unlike any Sorin previous, is far more vampire-centric than the others. While the other Sorins would often make Vampire tokens, this one relies on you already having Vampires to be in full effect. That being said, all of the abilities are pretty good if you do indeed have the vampires, and at three mana, this Soin is making a run at other popular three-mana planeswalkers, such as Jace Beleren, Liliana of the Veil, Liliana, the Last Hope, and, well...any three-mana planeswalker from War of the Spark that you can think of basically. (No, seriously, pick one, they're all bonkers.) Another thing Sorin has going for him is that he starts at an impressive four loyalty, and has two +1 abilities to tick up to five immediately.

But let's break it all down.

Our +1 ability is pretty great, making any one- or two-mana vampire you've already played a much more sizable threat, turn after turn. This is basically a mini Ajani, Adversary of Tyrants activation, while also adding deathtouch and lifelink, which will apply to even non-vampire creatures.

Our other +1 is also great, and it's literally Lightning Helix if we sacrifice a Vampire. Thankfully, there a ton of easily disposable vampires currently in Standard, but don't tell them I referred to them as such. I really doubt I need to explain why having a reusable Lightning Helix as a plus ability is strong.

Finally, our -3 is great. While Sorin doesn't have a "traditional" ultimate that can win us the game, he does have one that's extremely tempo-based and likely quite relevant. This Standard format has shown us the value of playing a Teferi, Time Raveler on turn three, following by his -3 with no target, simply to draw the card. Well, similar can be done with Sorin. On an empty board, you can get a significant mana advantage by putting something like a three-, four-, or five-drop Vampire into play for free. Heck, the one thing I really want to do is slam down a The Haunt of Hightower on turn three. Ah, a man can dream...

In larger formats, like Commander, there are actually a ton of seven- and eight-mana Vampires that you could cheat into play on turn three, while Sorin will live to tell about it.

The best part about this Sorin is that all of his abilities seem very relevant, and very strong in the right archetypes. Did I mention that being able to +1 to Lightning Helix, an ability that was a -2 on Ajani Vengeant, should not be overlooked?

There are currently 58 creatures with the type Vampire in Standard. There are also 29 cards with the word "Vampire" in their text box. That's a good amount, and that's not even including whatever new Vampires we're going to see in M20. Considering there was a decent

Vampire deck in Standard a season or two ago, this is a pretty good starting point to work from. This could be a preliminary list for Sorin, and yes, I definitely see him as being a four-of; while he isn't a great top deck when you don't have any Vampires, having Vampires is the goal of the deck.

First off, a turn two Adanto Vanguard, into Sorin, Imperious Bloodlord, giving your Vanguard +1/+1 and lifelink (and deathtouch!) seems like a great sequence. Sorin goes to four loyalty, your Vanguard gets a counter, you gain some life. Everybody wins! Well, not your opponent, but everyone else wins!

Another Sequence I'm particularly fond of is a turn one Legion's Landing, turn two Vampire of any kind, and a turn three Sorin that you -3 to put a Champion of Dusk into play with to draw three cards. Boy, that sure felt like a run on sentence, but it's really hard to elegantly describe sequences of Magic plays, and the activation of planeswalker abilities...and I even have a degree!

Cards like Martyr of Dusk and Dusk Legion Zealot also begin to shine a little more with Sorin's Lightning Helix ability, as these are both Vampires you don't mind sacrificing to help deal with a problematic creature or planeswalker.

While we didn't include any in this build, one thing to keep in mind is that Sorin, Imperious Bloodlord makes all of the "if you gained life" creatures a lot better, such as Regal Bloodlord and Famished Paladin. He also makes all of the tokens that vampires are able to amass even better, as both of his +1 abilities can "affect" them.

Outside of Standard, Sorin is also a pretty powerful resource. He can be a helpful sacrifice outlet in older formats alongside Viscera Seer for cards like Cruel Celebrant or Blood Artist, all three of which happen to be Vampires as well. He seems right at home in any sort of Aristocrats deck, as he not only lets us sacrifice a creature to trigger all of our other creatures, but by doing so, he also Lightning Helixes the opponent. In an Aristocrats deck, that's basically the equivalent of sacrificing four creatures at once, which is huge.

One thing to remember is that Sorin is basically a tribal planeswalker, so he isn't going to see as much play as cards like Teferi, Time Ravaler, or Narset, Parter of Veils. Those two just fit into much more open decks than Sorin will. That being said, Sorin is still an extremely powerful planeswalker whose abilities seem to have been dialed up due to that fact, and I would definitely expect to see this three-mana planeswalker finding a home in Standard along with his Vampire friends in the coming months, especially while Ixalan is still legal.

Thank you so much for reading, be sure to let me know your thoughts in the comments, and I'll see you next week!