I get in deck-building ruts sometimes and I end up resorting to sheer lunacy. Remember that Chandler deck from last week? Thatâs what I end up doing when I get bored. Luckily itâs spoiler season for Amonkhet and lots of different kinds of players are getting lots of different kinds of cards. People who love cheating creatures into play are getting Champion of Rhonas. People who love to play multicolored creature decks are getting Vizier of the Menagerie. People who love -1/-1 counter shenanigans are getting Nest of Scarabs. People who hate Magic as a game get As Foretold, a card thatâs going to make card prices really annoying when everyone is trying to build Hypergenesis and Living End decks with 4 copies of Ancestral Visions. Get your Lotus Blooms yesterday, I guess. Even lunatics get cards in this set. The best lunatic pick so far? That title belongs to Bounty of the Luxa. 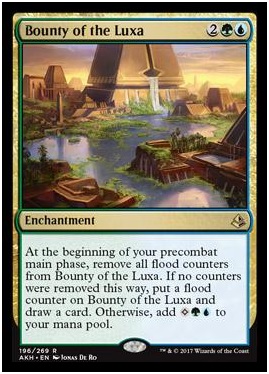 The flavor of this card is so bountiful that Guy Fieri felt a chill when this card was previewed. Food tasted better, colors were more vivid, the sun seemed to shine so bright that he had to move his sunglasses from the back of his head to the front. This card is a flooded canal boatride to flavortown which makes it a lot like Guy Fieri in that itâs flavorful but not very good at anything in particular. I play a lot of Simic decks and other decks with

in them and I wasnât super jazzed for this card at first. I got on board when someone mentioned casually that they wanted this in their Kruphix, God of Horizons deck and that this Kruphix deck did some pretty nasty things.

The reddit discussion for this card started off pretty normal with people assuming this card is dumb because itâs just more fodder for Atraxa, Praetors' Voice (a deck I doubt is excited for this weird, durdly card). It took a turn for the bizarre when /u/demonicpigg casually mentioned;

âI actually wanted that for my kruphix deck which accidentally blows up all lands turning doubling season into a creature :) â 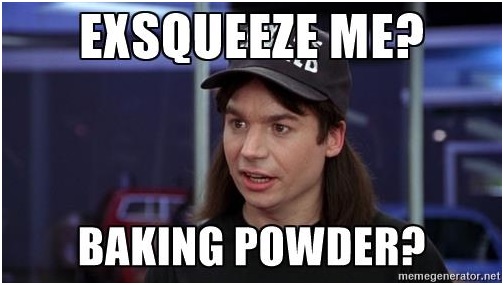 Naturally, I was all-in on finding out how and why this was accomplished. Do I think you should blow up everyoneâs lands? Of course not, thatâs the opposite of what I am about. However, if youâre blowing up everyoneâs land in the process of making Doubling Season into a creature, Iâm listening. What happens if Doubling Season is a creature and you target it with a kicked Rite of Replication? How do you kill them? Do you kill them? Do they kill you in real life for blowing up all of their lands and all you did was goof around with Doubling Seasons? Luckily for me, /u/demongpigg not only explained a little, he posted a decklist.

âThe goal is to turn [[doubling season]]/[[parallel lives]] into a creature, and then use things like [[rite of replication]] or [[cackling counterpart]] to make arbitrarily large, but non infinite, amounts of doubling seasons. Then attack with them. The basic combo is [[mycosynth lattice]] plus [[march of the machines]] which happens to turn all lands into 0/0 creatures. Other than that it runs [[memnarch]] to turn it into an artifact, with [[animate artifact]], [[karn, silver golem]] and [[ensoul artifact]] as alternate "make the artifact walk" cards.

The deck isn't competitive, but it wins a fair amount because it will sit around and do not too much until one turn with ~30-40 colorless mana in the pool it will "go off" by playing something to make it draw a LOT of cards.â

I bet youâre eager to see his decklist already. OK, then, letâs see what this lunatic is up to.

The March of the Seasons ? Commander | /u/demonicpigg

Do you catch how it works? Itâs subtle and it leans on Mycosynth Lattice rather a lot. Mycosynth Lattice makes everything an artifact, then March of the Machines makes every artifact an artifact creature. This is good and bad. Itâs good because you can make Doubling Season or Parallel Lives into a creature, then target it with a spell like Spitting Image and make copies of Doubling Season or Parallel Lives until you decide you have enough copies and then kill them by attacking. This is bad because your lands all die. This is even worse because everyoneâs lands die. Make sure you win quickly, because the game is miserable when no one has lands and you didnât kill them.

Is this deck 75%? I think so. Itâs not going to very consistently get the dream of Lattice-March-Doubling Season-Rite of Replication at all. Itâs tough to assemble a combo like that so youâre more likely going to just be a subpar Kruphix deck (still fine), so weâre hitting our metric about building a deck thatâs powerful (blowing up everyoneâs lands and attacking them with a quintillion 5/5 copies of Doubling Season) and skewing away from consistency (four card combo). Weâre also building with multiple build paths in mind because we will get the combo infrequently and need to find other stuff to do. While this is a decent example of a 75% deck, I think it could still use some tuning with 75% principles in mind to make it relevant to this article series, for one. Besides, OP said he wanted to jam a copy of Bounty of the Luxa in here and I think I know where I want to start cutting to make that happen. How will this deck look when Iâm done with it? Will it be very similar? Thatâs very possible. Letâs see what I come up with.

I didnât miss with the deck too much, actually. I sort of expected to make a ton of changes, but instead I found a lot of synergy that I didnât want to hamper. What I ended up doing was cutting some of the countermagic to give myself a few more ways to make things into artifacts like Liquimetal Coating and Argent Mutation. I also added Helix Pinnacle to give us an alternate build path â weâre not the best Kruphix deck ever at accumulating mana but we can still do it and if Kruphix gets bounced or pathed, itâs nice to have a place to put the mana before it empties out of your pool. I didnât try to make this into a typical Kruphix deck, this is anything but that and thatâs why I like it.

Is this deck going to be the scourge of your playgroup? No. I think the combo is good but not the easiest to assemble and you may struggle to win 1/x games. Is it worth trying? Yes, I think so. /u/demonicpigg says he wins often enough that the deck is worth keeping together and thatâs all I needed to hear. It was built in accordance with our principles whether he meant to or not and if it wins, thereâs no reason not to endorse this build.

What do we think? Is blowing up every land too aggro if you canât win right away? Have you always wanted to kill the opponents with a swarm of sentient Parallel Lives? Does this deck need an obvious card that /u/demonicpigg and I both missed or excluded on purpose but didnât say why? Could I find room for Trading Post in this deck? (No.) Leave me a comment in the section below. This was a lot of fun to write up and I hope Bounty and other new cards keep the deck evolving and keep it exciting. Until next time!