I have carved out a niche for myself in the Commander community by developing a deck-building ethos encouraging you to play decks that won't ruin anyone's day, including your own. So far, I have mostly stayed in my lane. I leave the ruminations about the format at large in the capable hands of *gestures broadly* like... everyone else. It's not that I think you don't want to hear from me about the format, I just decided I would keep my head down and focus on the thing I made up because no one can tell me I'm wrong about a thing I made up. That ends today. Well, goes on a one-week hiatus is more accurate, because this week I am going to tell you all something you may not want to hear. It's for your own good.

You don't run enough lands in your commander decks. You just don't. Yes, even you. Don't worry, I'm guilty of it too. We're going to break ourselves of this bad habit together. The first thing we need to do is to figure out how many lands we should be running and then marvel at how we've missed the mark thus far. This will be OK; you won't be judged or scorned. We're all here to learn. And who better to learn from than someone who does, and enjoys, the kind of complex math I pretended to understand long enough to get a STEM Bachelor's?

Frank Karsten is a math wiz and also the owner of a speedrun world record leaderboard spot I'm going to claim someday. My last run was sub-30, Frank, it's only a matter of time. When he's not freeing the realm of Shandalar from an evil wizard that you vanquish by immediately conceding to him, he's writing fantastic analyses of our bad habits as Magic players. Frank assures us we aren't running enough lands to hit our land drops consistently, and that's a problem. Using Frank's formula for Limited and extrapolating it to Commander by multiplying it by 2.5, we can get away with 40 lands in our decks and have a 93% chance of having 3 lands on turn three. Mana rocks mitigate that, as do spells like Farseek and Arcane Signet, but the 35 lands most of us run is equivalent to running 14 lands in Limited, something that a lot of us immediately know is a pretty bad idea. We don't have Sol Ring in Limited, but we also don't have a gajillion* (a very scientific number) 5-drops in Limited. The average... mana value (still getting used to that) of a Strixhaven Limited deck is around 1.5, whereas the average mana value for the first Extus deck I clicked on was 3.21. I looked at the front page of Archidekt and couldn't find a single Extus deck with an average mana value below 2.5. Limited and Commander are NOT the same format, and I'm not arguing our mana needs are the same. However, I also run mana rocks in Limited and I've never let the fact I was running two Signets (the equivalent of five in a deck that is 2.5 times bigger) make me think it was OK to run a Limited deck with 14 lands.

If we run a lot of lands, enough to hit them when we need them, aren't we going to have to cut some business to make that happen? Well, yes. Sometimes. I have a hard time cutting stuff I like, and I will admit that rather than cut my number of lands too greedily, I'm prone to removing spells like Swords to Plowshares and Beast Within at the last minute. I'd rather add something cute to make my deck work than trifle with ways to interact with opponents. That's not great for someone advocating decklists, but I also know that you view me telling you to cut Path to Exile to jam Helm of Possession into a deck as a suggestion. You're free to disregard it the same way you would if I told you 14 lands was fine in Strixhaven draft because Lessons exist or whatever.

Cutting business is a bad plan and maybe we shouldn't look at it as "you need to cut like 5 things from all of your decks to get to 40 land, pronto" and rather look at it as "what if hitting land drops was actually a good thing and part of your deck's plan and you can't get flooded late because you welcome land drops." Let me truncate that to just a picture of what hitting your land drops means to me. 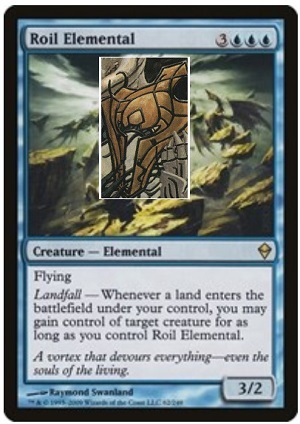 Playing our lands early is good because we get to play Magic, and hitting our land drops late is good because our deck can be set up to take advantage of hitting those land rips. You know how Valakut was supposed to be a way for a Red deck to mitigate how painful it was to topdeck a land when your opponent was at 3, but they forgot to make it Legendary despite giving it a proper name AND including "THE" in the title of the card so it turned into a weird combo payoff card? Well, I want to harness that same energy for a non-Red deck and I am calling upon the power of... let's face it, a deck I build kind of a lot. But THIS TIME I'm running exactly 40 lands to show you that it can be done without sacrificing anything the deck needs to function. I could think of no better home for a deck like this than a commander who sees non-land cards and gets them out of the way so we can play real Magic. I'm talking about a deck with substance. In theory, anyway.

Two commanders for the price of one. Not only that, they work in tandem quite nicely. Kianne rifles through the top of our deck, looking for those sweet, sweet land drops to get our deck going and Imbraham follows behind, picking up discarded spells and holding onto a secret hand that they can't interact with.

If we steer into Kianne's ability to make creatures, we don't actually need to draw many cards that aren't lands. We still will, but since we can run landfall cards that give us value for each land we play, the pressure on us to draw a ton of spells is lower. We could play 40+ lands and not miss out on anything, especially if we used cards like Abundance to filter our draws and stack our deck so we know what's next. Using Mirri's Guile and Sylvan Library may be kind of rare in Kianne decks, but I want to really steer into playing a lot of lands. We can even use cards like Halimar Depths to make sure we get what we want with Kianne and Imbraham - and Simic (sorry, Quandrix) decks have a lot of ways to return lands to hand to be used again. In fact, we are going to spend a lot longer on our land selection than we normally do.

This may need more lands, honestly. You can keep the number of non-lands you run low by running as much landfall as you can fit, and you can honestly probably find room for more. A good turn involves Roil Elemental into Splendid Reclamation. I don't normally include this card, but Mind over Matter turns Kianne into a machine, running back more digging with every land you come across. You can bring the lands back from the yard with various means, and Simic decks have more if you want to go that route. You could add Intruder Alarm, Awakening, and Kiora's Follower to really load up on that kind of effect. If I built this, I might even go old school and add Kydele and Thrasios for old times' sake. However you build, the important thing is to ADD ENOUGH LAND. I've been running 33 land landfall decks like a complete moron, and that ends today.