Last week, I dug deep into my past and talked about how Mystic Snake made me the Simic enthusiast I am today; but, before I had a clear guild affiliation, I was just a bad player. I didn't know I was a bad player because I was the best player at my school which was full of terrible players who started at the same time as me, or after, and many of whom didn't know the rules (we had a lot of heated arguments about whether The 2 Xs in the casting cost of Meteor Shower could be different numbers or whether Crystalline Sliver prevented your Slivers from giving each others' abilities. If you weren't a new player in the 90s, you really missed out). In my very early days, I liked the idea of breaking the rules and one of the ways I wanted to do that was to play unblockable creatures. I didn't think to use the internet to see if there were creatures that were just regular unblockable, so I ended up having to do a bit of work to get those creatures through unblocked. 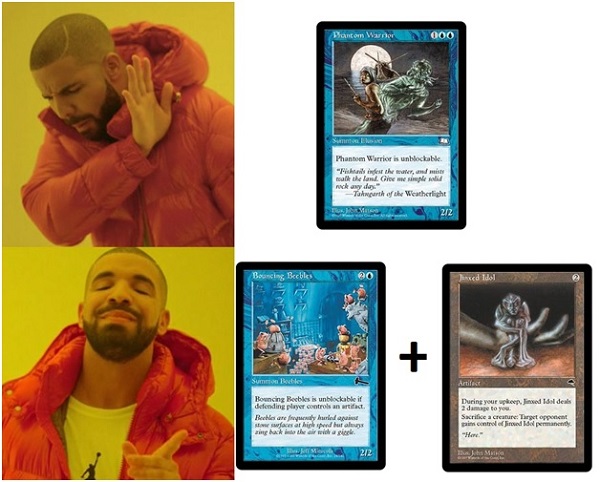 The deck was... not bad, actually. I may have been a bad player, but I had good cards because I read Duelist magazine. That meant I knew to put Necropotence, Counterspell, Terror, and Nev's Disk in my deck and I also knew that a fun way to kill people was with Corrupt and Hecatomb. Sengir Autocrat and Breeding Pit gave me the cannon fodder I needed for Hecatomb and Jinxed Idol. I finished the deck off with Feast of the Unicorn to make sure my Beebles hit them hard enough to get the job done. I couldn't stand up to a real deck at the time, but I had fun ruling the lunch tables. It was Duelist magazine that told me what I should have been doing at the time - using Necropotence to Donate Illusions of Grandeur and kill them. My main takeaway from that article wasn't what it should have been. Instead of saying "I need to go buy Donate and Illusions of Grandeur" I said "I need to go buy Donate... and Steel Golem."

I know better now (kinda), but those games where I soft locked opponents with a Steel Golem they couldn't use to block my twice-enchanted Beebles swinging for 10 were a lot of fun, and I still want to be doing evil things like that. Sleeper Agent was a card that I tried to use, but I ended up taking a lot of damage from it and losing a lot of Black Knights and Erg Raiders to it. I decided that not all gifts you give your opponent are equal. I stopped trying to donate things to my opponent for a while, but all of that changed with the printing of a new card in Mirrodin - Mindslaver.

My first experience with Mindslaver was playing it in Sealed. Everyone told me it was too slow but it turned out the very first time I drew it, slow was good because that gave my opponent time to play Wall of Blood. "You're about to make some extremely poor decisions" was the quote I began to use when I would activate Mindslaver, and from the very first time I ever used it to make someone make his Wall of Blood a 20/22 creature, I was usually right. You can do a lot with a Mindslaver, and if Sun Tzu is right about a bushel of my enemy's grain being worth 20 of mine, my enemy using the last of his flaming arrows and oil to polish off the last of his grain has to be worth running a durdly, six-mana artifact.

These two stories are important to establish the experiences that made me the kind of player I am today and to explain how I reacted when I saw Xantcha, Sleeper Agent spoiled. They're about to make some extremely poor decisions, and I'm going to help.

We don't have access to Blue with a Xantcha deck, which means no Donate and no Illusions of Grandeur (and no Bouncing Beebles); but, we can still mess them up a bit. I'm going to 75%ify a standard Xantcha list to give it a little Jason Alt kick to make the 13 year old me proud (although he'd probably be suitably impressed that I can buy beer and stay up as late as I want). If I am going to Slaver lock them, I want them to make some very poor decisions. Tapping all of their mana and not attacking anyone is a waste. I want them using removal on their own creatures and then sacrificing all of their land to their Zuran Orb. Why do they have a Zuran Orb? Because I'm a generous guy. 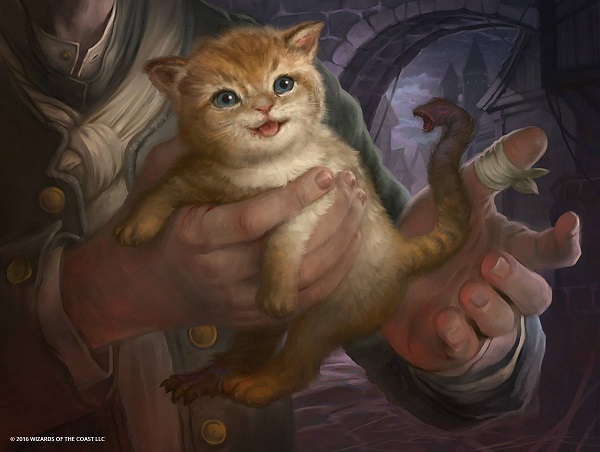 Are you starting to get the picture? Unfortunately, we're going to have to bend our rules a bit and run some tutors to make sure we draw either Mindslaver or Cruel Entertainment or Sorin Markov. That's OK, and it's not like our deck is ONLY good doing those things. As it turns out, burning them with Jinxed Idol is effective with Wound Reflection on the board, and those dings really add up. We'll be dinging everyone big time; and, if we're lucky, they're going to make some very bad decisions.

Where is my Mindslaver? | Commander | Jason Alt 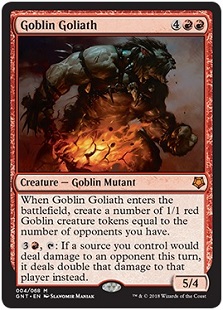 First of all, you probably had to hover the mouse over more cards than normal to see what they are. Gauntlets of Chaos? Avarice Totem? Confusion in the Ranks? A lot of you probably didn't even know Goblin Goliath existed yet. He's pricey, but adding tokens we can use to chump block, sac for mana, or pay the Totem toll in addition to being a Furnace of Rath on demand means he has earned a spot in our squad. He's from the new Magic Game Night product, and whether or not you're excited about that, we got a non-trivial card that it seems like I'm just wedging into the article because I'm supposed to; but, I assure you, it was spoiled today (for me) and I saw it and thought it did stuff I want. I'm running Daretti, Ingenious Iconoclast in this deck for the love of Heliod. Goliath has earned a tryout.

This deck, unlike a lot of what I brew, isn't really pulling in too many directions, so I can't suggest a ton of build paths. You can abandon my slaver junk and do a more typical Xantcha build, but you don't need to read my column to get that, just go to EDHREC and click "Average deck" and halfway there. If you really would rather do that, cut a lot of the artifact stuff and jam back in stuff I cut like Fumiko the Lowblood and Vow of Lightning that make it clear you want Xantcha swinging at your opponents while you laugh. As much fun as it is to give someone the stick to beat someone else senseless with while granting yourself protection from sticks, I think it's even more fun to completely influence their decisions rather than only partially.

Mindslaver has a significant infrastructure in this deck, but I think it's worth it. We have Vampiric Tutor but we have a few more "fun" ways to grab our slaver like Inventors' Fair and Gamble. Looking at the list, we almost want to discard Slaver to Gamble because we dedicated a lot to getting Slaver back out of the graveyard to use it again. A Slaver every turn isn't the lock in multiplayer that it is in other formats (Slaver lock was my first Vintage deck! It's a poor man's Time Vault.) but it's still a nice thing to be able to threaten. Goblin Welder and Daretti, Scrap Savant do some serious work here and Scrap Trawler can get you back a cheaper artifact to sac to Welder when the Mindslaver goes to the yard, meaning you can loop Slaver with something like Solemn Simulacrum for serious value.

Ideally, what I want to do is give them something I can hurt their board with like KCI, Ashnod's Altar, or Claws of Gix, then sac as much of their board to it as I can. With Claws of Gix or KCI, you want to make sure they can't sac them to themselves in response to you taking over their next turn, so I would use Bazaar Trader or Avarice Totem while you control their turn so they can't respond. Saccing all of their land to Zuran Orb or all of their creatures to Ashnod's Altar is really saucy and I think it will be a lot of fun. I included Cruel Entertainment and Sorin just because I want some redundancy. When you're not Slavering them, feel free to dump your mana into Xantcha to kill them softly and let your enchantments finish them off. Your opponents, meanwhile, will be slugging each other with their creatures since it's easier to attack each other than attack you with your No Mercy and Kazuul, Tyrant of the Cliffs etc. Once they're all weakened, dome them with a big Exsanguinate or whichever finisher you want to include. Exsanguinate was my card #101 so I cut it, but you can add it back and cut something cute. It may be a better choice than Torment of Hailfire but I refuse to acknowledge that.

What do we think? Is this more fun than the stock Xantcha list (yes)? How much more fun? Did you ever think you'd be seriously considering Jinxed Idol in a 40 life format? Am I missing something huge (I could have sworn there was another Mindslaver effect but I can't find it)? Let me know in the comments section. Thanks for following me over to Coolstuff and make sure to check out my podcasts and other article series if you're a fan of how my brain works. I'd force you to listen to Brainstorm Brewery every week, but Mindslavers aren't real so all I can do is ask nice. This was easily the most fun I've had brewing a deck in 2018 and I hope you got as much of a kick out of reading as I did writing. Thanks, everyone. Until next time!