Sagas are back, and Theros is the perfect plane for their return. I'm a big fan of the card type and their ability to tell a story, and once again we get some fantastic pieces. This time around, the sagas are less concerned about relating past Magic events to new fans as relating cool myths of the world of Theros. Myths can be as real as history on Theros, so it's highly appropriate.

If you're a long time reader of my column, you might vaguely recall me talking about the Sagas of Dominaria, and how the medium the saga imitates tells as much of a story as the rest of the card. A well done saga tells a story through every facet of the card, and

The Akroan War is a riff on the Trojan War, a mythical war waged when Paris of Troy took (details vary) Helen of Sparta from her husband, the Spartan king Menelaus. The story is told through a variety of sources, most notably the Illiad and the Odyssey. It was referenced in the original Theros block with Akroan Horse, a riff on the Trojan Horse, so the saga of the Akroan War here is delightful. 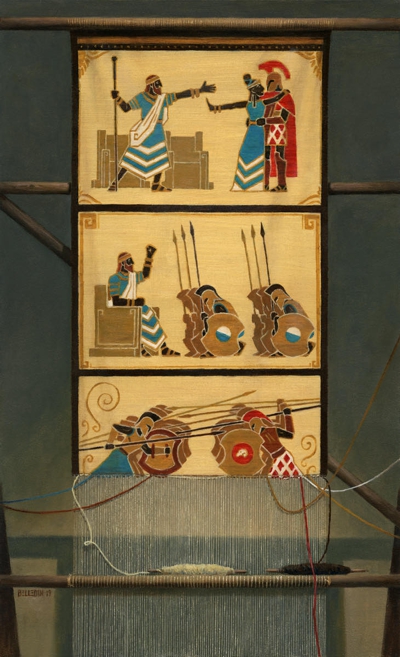 The Akroan War by Steven Belledin

There is a bunch of cool stuff going on with this saga, so let me break it down. The medium is a classical greek tapestry, depicting generally dark figures on a brown or tan background. The 'panels' of the tapestry are divided into three parts, each telling a different piece of the story.

The Akroan War appears to have been between Meletis (I assume) and Akros, rather than Akros and some unnamed third polis (as many poleis rise and fall over the years). The blue is a giveaway, the color of Magic's not-Athens, Meletis, while red is the color of it's not-Sparta, Akros. In the first panel, we see an Akroan figure embracing a Meletian woman, presumably the queen, while the king poses angrily. This is obviously the riff on Helen leaving with Paris, with an angry Menelaus left behind. "Gain control of target creature" is especially flavorful as the first stage of the saga.

The Meletian king left behind is furious, and gathers his soldiers for war. Stage II of the saga is forcing an attack, which is also very flavorful. The final panel of the artwork is unfinished, as the two sides go to war. Given what stage III does, having each creature damage itself, I would assume that no one really wins. The tapestry remains unfinished, a testament to the pointlessness of war.

Honestly, it's just that last bit that makes me really love The Akroan War, the unfinished nature of the tapestry tells a part of the story by itself, and a powerful one.

Whether or not Haktos the Unscarred died in the Akroan War, we don't know. You can read all about Steven Belledin's creative process for this work on Muddy Colors.

The Binding of the Titans

The Binding of the Titans is a bas relief depicting Klothys, God of Destiny imprisoning four Titans in the Underworld (the fourth is hard to see at card size, but it's behind and left of Klothys. We don't know whether she only imprisoned those four, and in the set we only see two: Uro, Titan of Nature's Wrath, and Kroxa, Titan of Death's Hunger.

The Binding of the Titans by Adam Paquette

The story the card mechanics tell isn't as clear as some others, but dropping cards into a graveyard (and exiling graveyard cards) is a great way to show their imprisonment in the Underworld. The last ability seems to refer to their escape, or perhaps to Klothys's own return.

This saga is reminiscent of Kronos's overthrow of the Titans and their confinement in Tartarus.

The Birth of Meletis

The Birth of Meletis is a story told in a couple different places. The story we're given in the Planeswalker's Guide to Theros, Part 2, is the following.

Agnomakhos, the Archon Tyrant. Meletians know that the area that is now their city-state was once ruled by an archon - a hooded warlord who rode a great flying beast - called Agnomakhos. Agnomakhos ruled with an iron fist for centuries, apparently immortal, outliving the generations of leonin that he used as his soldiers and personal guard. Agnomakhos aggressively expanded his empire during his reign, spreading it as far as the forests to the north and the mountains to the east, imposing merciless order over the wilds wherever he went.

The legend goes that the god Ephara granted magic to the humans to help them overthrow Agnomakhos, cast out the leonin, and free Meletis from tyranny. The humans who were victorious over Agnomakhos founded the enlightened polis of Meletis from the wreckage of Agnomakhos's empire. To this day, the leonin remain detached from Meletis and uninterested in trade or dialogue.

The Birth of Meletis by Tyler Jacobson

But that isn't the whole story. In It's Time to Talk Commander (2016 Edition)!, we learn of Kynaios and Tiro of Meletis, the Guardians of Meletis that may have actually had more to do with it than Ephara, who isn't mentioned.

In the age of antiquity, the humans of the region that would one day become the largest polis on Theros were ruled by the tyrant Agnomakhos, an immortal archon. Unchecked for generations, his power grew as he carved out a mighty empire. Kynaios and Tiro, joined by their love for one another and for freedom, rose to challenge him. The people rallied to their cause, and Agnomakhos was defeated. The polis of Meletis was founded on the ruins of Agnomakhos's empire as a beacon of freedom and enlightenment, and its people chose Kynaios and Tiro to be its guardians.

Of course, mythology cares little for what really happened, especially on a plane like Theros. The medium here is a statue of Ephara in Meletis, and given that she's the god of the polis it makes sense that she'd be the focus of the Meletian creation myth.

The mechanics of the card speak toward the building of a city: find a home, build walls, and live.

Elspeth Conquers Death is a fantastic mosaic piece. It depicts Elspeth's triumphant return, as the hands of the Underworld attempt to grasp her, she pays them no heed. A large halo surrounds her head as she stands above Erebos, Bleak-Hearted, Ashiok, Nightmare Muse, and Kunoros, Hound of Athreos. The name, like a few other sagas, is reminiscent of titles given by archaeologists to recovered pieces - straightforward and literal.

The mechanics of the card are cool, too. Elspeth defeats Heliod and returns from the dead!

Elspeth's Nightmare represents Ashiok's manipulation of the slain hero. Warped visions plague her, reminiscent of Chainer's Torment (a deliberate comparison) as a relief carving in dark stone with red gemstones inset. Beyond the usual torments, Elspeth is most haunted by a Phyrexian Obliterator (note the cross-section of scars on its eyes distinguishing it from a Phyrexian Negator).

Ashiok has chosen the Obliterator for good reason. The last time we visited Theros, Xenagos, the Reveler, and a former priest of Phenax, God of Deception, induced hallucinations in Elspeth that caused her to see the Phyrexian monster and lash out at it. When she came to her senses, she realized she had slain her lover, Daxos. The symbolic chains of the Underworld crossing at Elspeth's head, her mind, is a fine touch illustrating how she has been shackled to the Underworld.

The First Iroan Games appears to be painted pottery representing a marathon, wrestling, and javelin competition at the eponymous First Iroan Games. There's not a ton to say here, but I like how it all syncs together, especially the mechanics. You create an athlete, train them, and they win. Then you get a gold medal!

Kiora Bests the Sea God is reminiscent of ancient greek maps, which is a perfect fit for Theros, especially in representing a legend of the sea. In it, we see Kiora, the Crashing Wave facing off against Thassa, God of the Sea, over Arixmethes, Slumbering Isle, a story told in Drop for Drop. When Kiora realized that she couldn't defeat Thassa, she stole the Bident of Thassa instead. Thassa, Deep-Dwelling has a new spear to replace the bident now, forged by Purphoros for his beloved sister.

The mechanics here are fantastic. Enlist the aid of your sea monsters, fight against the sea, and steal the bident!

Medomai's Prophecy is a Seb McKinnon piece depicting a mural of one of Medomai's dire prophecies. The sphinx oracle is known for appearing in Meletis during times of great import, and one such time was just prior to Xenagos's apotheosis. The sphinx predicted Daxos' tragic fate at the hands of his lover, and the mural here bodes poorly for Meletis. Or perhaps for another polis, already lost.

The Triumph of Anax

The Triumph of Anax appears to be a decorated shield, depicting King Anax's defense of Akros against Rhordon the Rageblood. During the events of the previous Theros block, Xenagos impersonated an oracle of Mogis, God of Slaughter and convinced a minotaur army to lay siege to Akros, led by the aforementioned minotaur known as the Rageblood, depicted here in battle with Anax.

The Triumph of Anax by Chris Seaman

Anax and his second, Elspeth, were to buy time for Daxos and Queen Cymede to raise the river until it could flood out the minotaur. The plan worked, but Cymede had to give herself to Keranos in exchange, and Anax was wounded in the battle with the Rageblood.

The card captures that battle pretty well, doing battle and finally dueling with your enemy.

Tymaret Calls the Dead is our final piece, and our most unique. A sculpture of Tymaret, Chosen from Death, who was the de facto ruler of Odunos, one of the two Returned necropoleis. The sculpture is made from masks of the Returned, and represents the inspiration Tymaret gives his people. While not a true king, as the Returned don't have the memory or organization for a true kingdom, Tymaret nevertheless inspires other Returned to his side for raids on humanity.

Sagas are easily one of my favorite card types, and how could they not when they come with lore counters, stories, and fantastic art? I would love to see sagas more often, as they're a fantastic narrative tool, and there are so many untapped stories, I can't wait to see where they go next. On Theros, I would love see the Callapheia as a saga, the tale of Callaphe, Beloved of the Sea.