Loreseekers. You come to me on the day of my new article, and ask me for some flavor. You've come with your hands extended in friendship, and so I shall provide this flavor for you. New Capenna, she is a hard city. Among the five families, you may yet find paradise, but such a life is not for the weak of stomach. If you think you can handle it, I recommend this video.

In all seriousness, I've already talked a lot about New Capenna. You might have seen it? It's weird figuring out what to say about a brand new setting, where everyone is getting the same information you already have. Even weirder when you're in the official videos talking about the setting.

Check them out if you haven't, because I already talk a lot about Elspeth's backstory and how it connects to New Capenna. There are some Phyrexian things that have happened on New Capenna in the past, although all of that is mostly backstory for the set itself. That said, there are some things I didn't cover, so let's talk about the big one first. 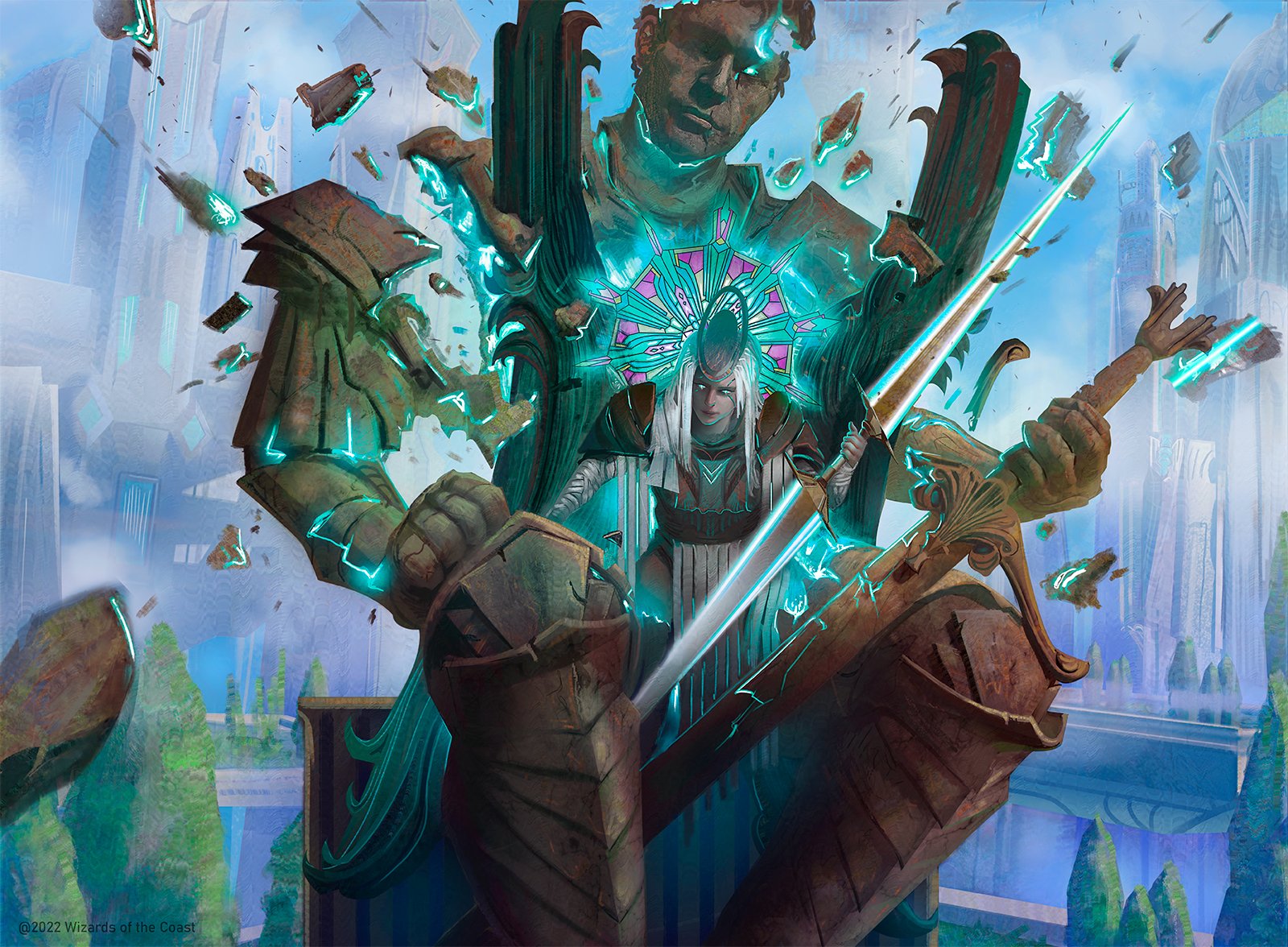 When the story ends in Episode 5: Hymn of the Angels, it's fair to say some readers left with a different impression of what had happened to Giada and the angels than intended. We get a Revelation of Power, but exactly what happened after Giada became pure halo and gifted Luxior, Giada's Gift may not have been clear for everyone.

After all, when the set was revealed, there were nine angels in the set itself, including Giada, Font of Hope. Avatar of Emancipation hints at what happened, and Majestic Metamorphosis confirms it: the angels are waking up! Should this have been a story moment? Maybe, but the story itself was very focused on Elspeth's journey, as it had been nine years since she last appeared in an actual story, and so while the angels were hinted at returning (even using Avatar of Emancipation's art in the story), it's not the focus. Still, it's a fair criticism.

A couple more minor worldbuilding elements: Expendable Lackey and Exotic Pets tell a mini-story about a poor underling named Altonio... who probably deserved it. Rumor Gatherer shows you how they get food for the city, in case you're one of the people concerned about that. Miniaturization, greenhouses, and druids with nature magic. With that... there's really not much to say, although if you're one of the people who still think there's a secret plane name for New Capenna, you're going to be disappointed. It's just New Capenna, although you can call it Capenna for short.

What's fun about Nimble Larcenist is that it's technically a Thieving Magpie (it's a magpie aven). Lagrella, the Magpie is not, but she will make you Sleep with the Fishes. Meanwhile, Cormela, Glamour Thief is a pun about the double-meaning of glamour (both in terms of 'stardom' and 'magic spell').

Racoons are a very American (the continent) animal, so if you're unfamiliar with them, you may not have heard all the various nicknames Americans have for them. One such nickname, for their habit of breaking into trash cans, is Masked Bandits. 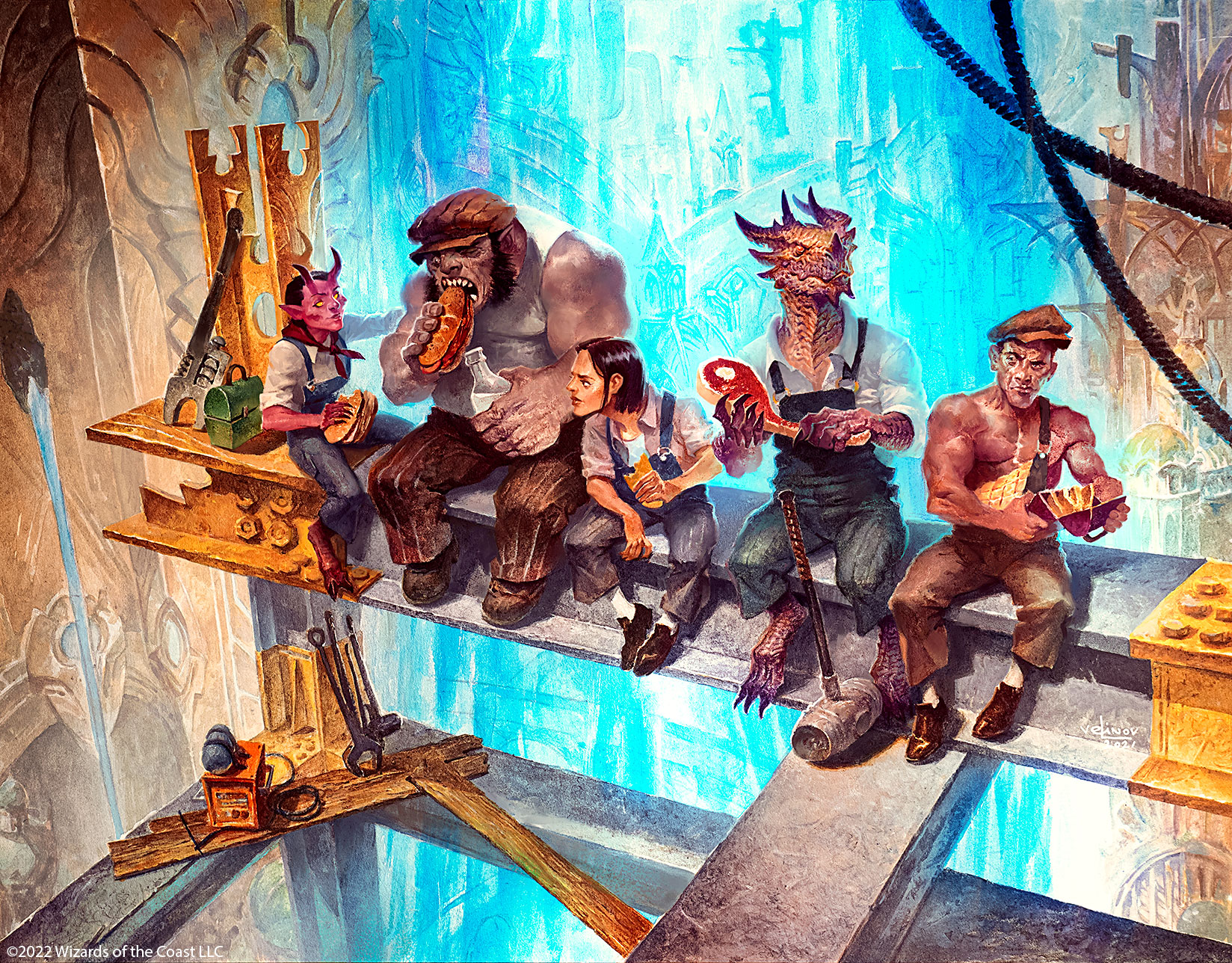 Riveteers Ascendancy is a smidge more literal than most 'Ascendancy' cards, which were originally a cycle of wedge-aligned enchantments based around the factions of Khans of Tarkir. In this card, we see a group of Riveteers taking a break atop a skyscraper for lunch. This is a reference to an extremely famous photo called Lunch Atop A Skyscraper from 1932. You can see that photo below! A Wealth of Flavor

New Capenna is based on the Prohibition-era United States and the organized crime made famous by the time period (although it borrows liberally from other time periods in many cases). As such, it contains a wealth of references to the various tropes and expressions that have evolved from popular media, and gangster and noir genres specifically. Speakeasy Server is a reference to the fact that drinks during the prohibition were served in 'off the books' establishments called speakeasies. It's fairly obvious what Halo is intended to be an analogue for, here, albeit with a magical twist (not THAT kind of twist, though).

There are some great tropes in the set about certain types of characters you'll see in film. Ballroom Brawlers plays in the trope space of the fighting dancers. You see this all the time in action films, especially in ones where romantic leads are both assassins/gangsters/soldiers, and they end up dancing while also shooting other people, or fighting in such a way that it's almost a dance. Extraction Specialist is another trope you'll see in a lot of action movies, usually about a criminal (or CIA agent, bodyguard, whatever) who has to get a kid out of a sticky situation.

Brokers Veteran is the classic "just about to retire" trope. They're going to take one last job, or are on their last day on the job, and bad stuff is going to happen. The image of Rogue's Gallery is a great crime trope about a police line-up, with some great evocative art for the setting. Exhibition Magician is about the surprisingly common trope of magicians in murder mysteries or noir. How many TV shows and films have featured magicians - accidentally or on purpose - killing some during an act? Probably too many.

Mysterious Limousine is a trope about how often in noir stories, the protagonist gets picked up by a rich, connected person and they have A Little Chat in the limo before being dropped off elsewhere. A Little Chat is a common expression often used ironically, as it's typically a very bad thing as your fate is determined by crime bosses. But generally, if things don't go well, you'll be Run Out of Town. So, if you see someone coming for a chat, you may want to Slip Out the Back. Occasionally, they may just want to Buy Your Silence, which is about paying someone to keep quiet about something they witnessed.

Backstreet Bruiser's flavor text is a reference to the common joking expression or trope, "I could tell you, but then I'd have to kill you". The earliest reference I could find for it was the Sherlock Holmes story The Hound of the Baskervilles. That novel would have been incredibly popular in the early 1900's, making the expression a century old meme.

You can't run organized crime with organization, often in the form of accounting. Ledger Shredder is a well-used trope about destroying the ledgers before the police find them. Al Capone got arrested for tax fraud, after all. Witness Protection brings up my favorite line of all time: legitimate businessperson. This is mostly a joke now, but is a meme largely inspired by mobsters protesting a bit too much about being mobsters. The first person who casts this on my Krenko commander can have a big hug, because finally Krenko will no longer be slandered by the Ravnican criminal justice system.

Goldhound is a reference to the gold hood ornaments of Lincoln Automobiles in the 1930s. Greyhounds were the mascot of the company back then. They're very popular in films about the era, because those hood ornaments make for great cinematography, but I have no idea how popular they actually were at the time. A lot of art deco angels in the set are also references to hood ornaments, like Gilded Pinions.

Sticky Fingers is an expression that means stealing. Your 'sticky fingers' means the things you touch at the store stick in your hand. Strangle-ing someone with their jewelery is a common trope in murder mysteries and crime stories. A Courier's Briefcase is often a trope for some kind of macguffin in a lot of mysteries. Fight Rigging is a common thing in a lot of crime stories, where a boxing match is 'fixed' so that the outcome is never in doubt for betting purposes.

Endless Detour is about the very common trope of false detours re-routing a vehicle to steal, kill, or free whoever or whatever is inside. Ominous Parcel is about the well-worn trope of sending a kidnapped person back in pieces.

The Ones About Murder 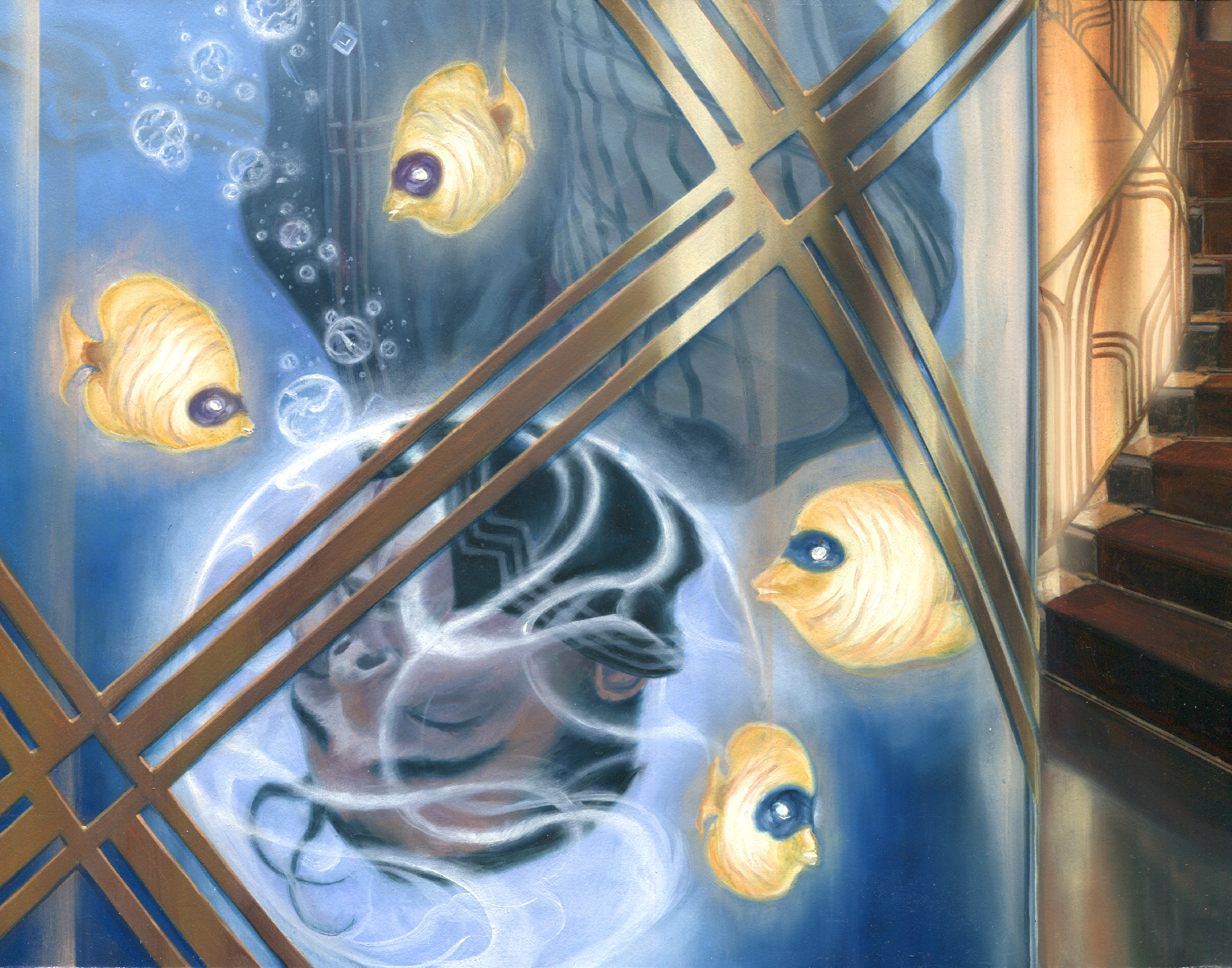 Sleep with the Fishes by Randy Gallegos

Make Disappear is an expression meaning to kill someone. There are a lot of these kinds of expressions in the set.

An Offer You Can't Refuse, because the alternative is getting dead.

Out of the Way is also about killing somebody.

Sleep with the Fishes is about romance with mermaids. No, it's about death. Unless...

Crooked Custodian is about the well-worn trope of rolling a dead body into a rug to dispose of a body.

Body Dropper, or dropping bodies, is about how most nursing homes in the US work. No wait, it's about murder. And uh, maybe the nursing home thing?

Cement Shoes is a colloquialism for trapping someone in cement and dropping them in the harbor. To kill them. Have you gotten the theme yet?

That's it for today! I'll be coming back more regularly as we approach the intensely lore heavy sets of Dominaria United and The Brothers' War, until then, let me know what you thought of this article in the comments, and what you might want to see in the lead-up to the Dominaria-heavy rest of the year.