The Secret Lair Drop Series has proved to be a popular, if controversial, entry into Magic's product lines. I've avoided talking about it so far as there wasn't quite enough to fill out an article for my purposes, but after four months and ten drops I think it's worth diving in a bit. I'm of two minds about Secret Lair. I love much of the flavor, allowing Magic to do things with its art outside of its usual constraints. I think on a Vorthos level, Secret Lair is a pretty big slam dunk. As a product I'm less of a fan, and I've only gotten a couple for myself and usually split them with friends.

Today I'm going to be talking about the Secret Lairs in "set order". Each Secret Lair Drop card is numbered in 000 format, and I'll be tackling SLD 1-40. I have more than enough to say on just these first 40 without other releases you might have seen. We're in a weird spot right now where the numbers beyond 40 start jumping around. International Women's Day is #51-55, but then April Fools jumps forward to #59-62, and then Theros Stargazing jumps forward yet against to #68-82. I will cover those others once we fill-in the blanks, so to speak.

If you're wondering why those numbers jump around so much, I am too. I can only guess there are 3-5 Secret Lair Drops that have been produced to the point of being numbered but are awaiting a "Drop Date". Why would this happen? Well, if the April Fools Drop is any indication, it's likely they're waiting to align with holidays or they've modified the order based on some arcane (to us) internal decision-making process. As COVID-19 threatens to continue to delay products, I have to imagine we're going to see some more shuffling of these products to meet a revised schedule.

It's possible higher-numbered products (like Theros Stargazing) were created later, coinciding with the development of the Theros: Beyond Death Showcases rather than as a part of whatever the initial development was. It's also possible that some of the Secret Lair Drops whose numbers we are missing aren't tied to anything, and are being saved for spots in the release schedule where they'll do the most good for Wizards.

With all that out of the way, let's dive in! 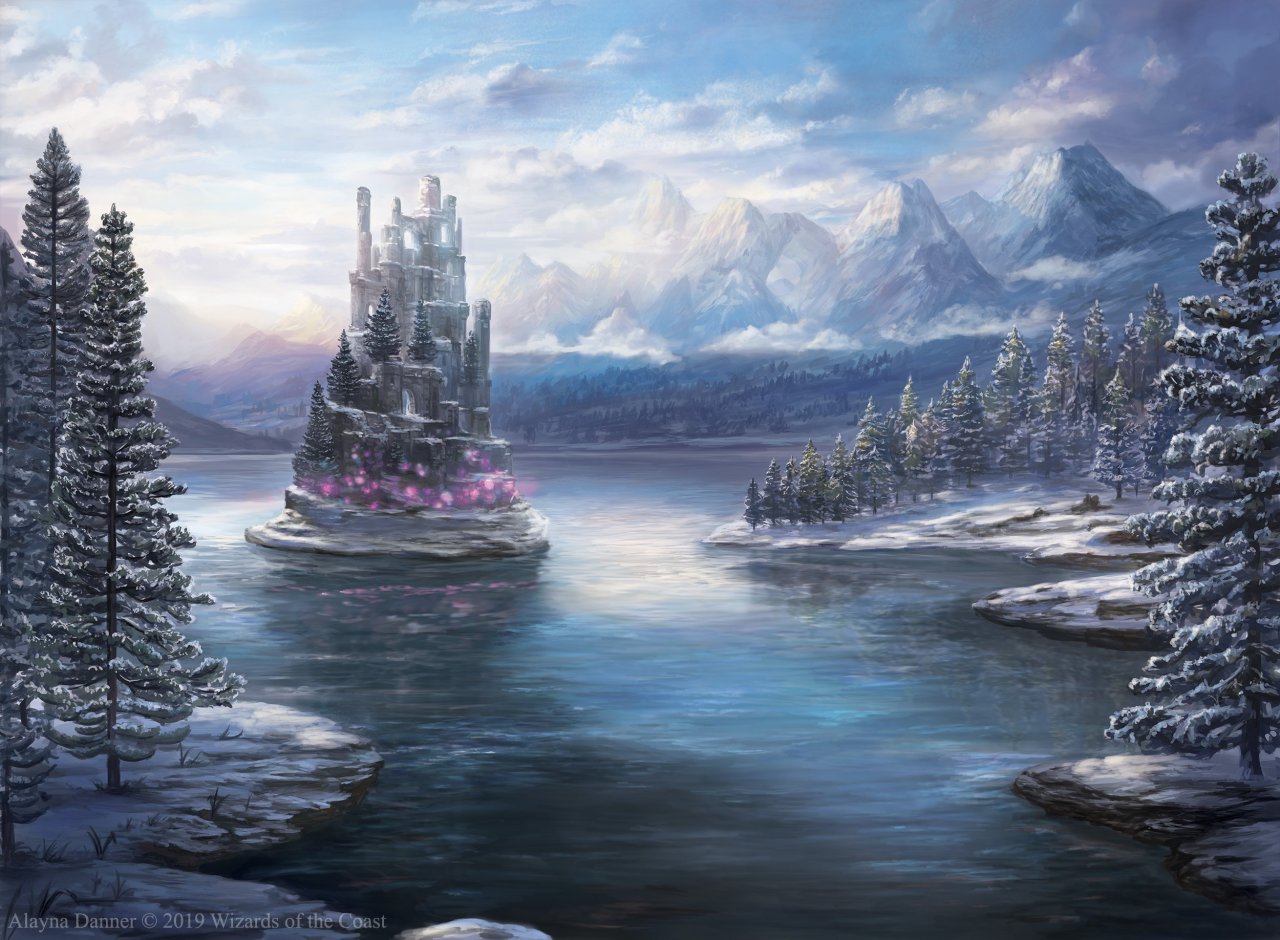 The original SLD push was five products over five days back in December 2019. While Eldraine Wonderland was technically on day two (I'm sure there were some eldritch marketing decisions behind the release order), it's the first numbered Secret Lair. The pieces are genuinely gorgeous, and were well timed on a winter release. The Snow-Covered Island with the frozen keep is my favorite of the bunch, but they're all beautiful landscapes. Although the name says that they're ostensibly set on Eldraine, there aren't really any visual features that would otherwise indicate it. Feel free to use in other flavorful decks just like any other non-specific basic land art.

Golgari Thug, Life From the Loam, and Bloodghast by Dan Mumford

Dan Mumford is probably best known for his IMAX movie posters in his dichromatic style, but his work across Magic is just as impressive (and beloved). Restless In Peace does something that I really enjoy about the SLD series with how coordinated the art for each drop can be. The three cards in this drop form a triptych (but not a panorama), moving from mono-chromatic yellow to a dichromatic middle piece and finally a monochromatic pink piece. How you get yellow and pink to be creepy and gloomy is beyond me, but Dan does it. It's worth noting that this drop flavors Bloodghast as Golgari, so have at it flavor deck-builders. 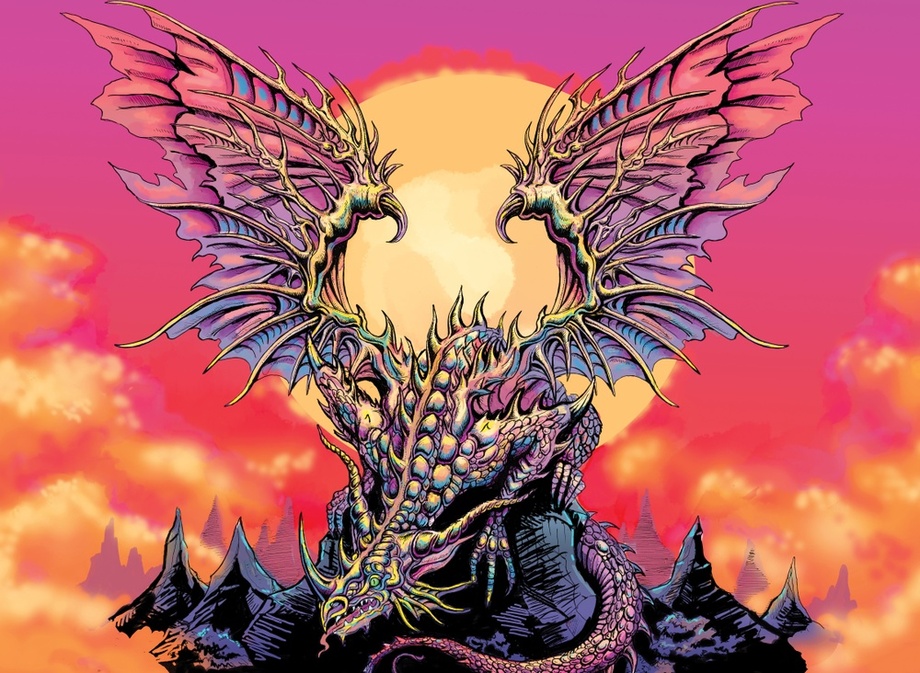 The Ur-Dragon by Justine Jones

Justine Jones is known for her colorful art nouveau style. What I love about this drop (other than the very solid reprints) is the almost iridescent color palette that makes each piece feel like a hair metal album cover. These should be painted on the side of a van.

Olena Richards knocks this Bitterblossom art out of the park. It was the first SLD to play with the card frame, this one using a transparent frame to give it the 'full art' treatment (distinct from the borderless cards we see elsewhere). It also came with four different tokens that form a polyptych with the Bitterblossom, which is a nice touch and a gorgeous mural when not split apart.

Harkening back to goblins in classic Magic, especially the Foglios's distinctive style, explosion sounds goes fully silly action film. Goblin Bushwhacker is the Rambo of the group, with a Red bandanna and armed with entirely too many knives. Goblin Sharpshooter armed with a blunderbuss is all you really need to know about this card. I love the modern 'wannabe militia' look, combined with the rubber ducky attached to the 'scope', which just seems to be a telescope strapped to the blunderbuss. Goblin King is especially Foglio-riffic, and is the only reason I would switch from my Sixth Edition version. Goblin Lackey being a baby armed with comically old-timey fuse bombs, hanging from Goblin Piledriver's mace, is just delightful.

"The King" set out to assemble the most kaboomiest goblin team in the land.

The flavor texts are especially joyful, so make sure to take some time to read them (and giggle). 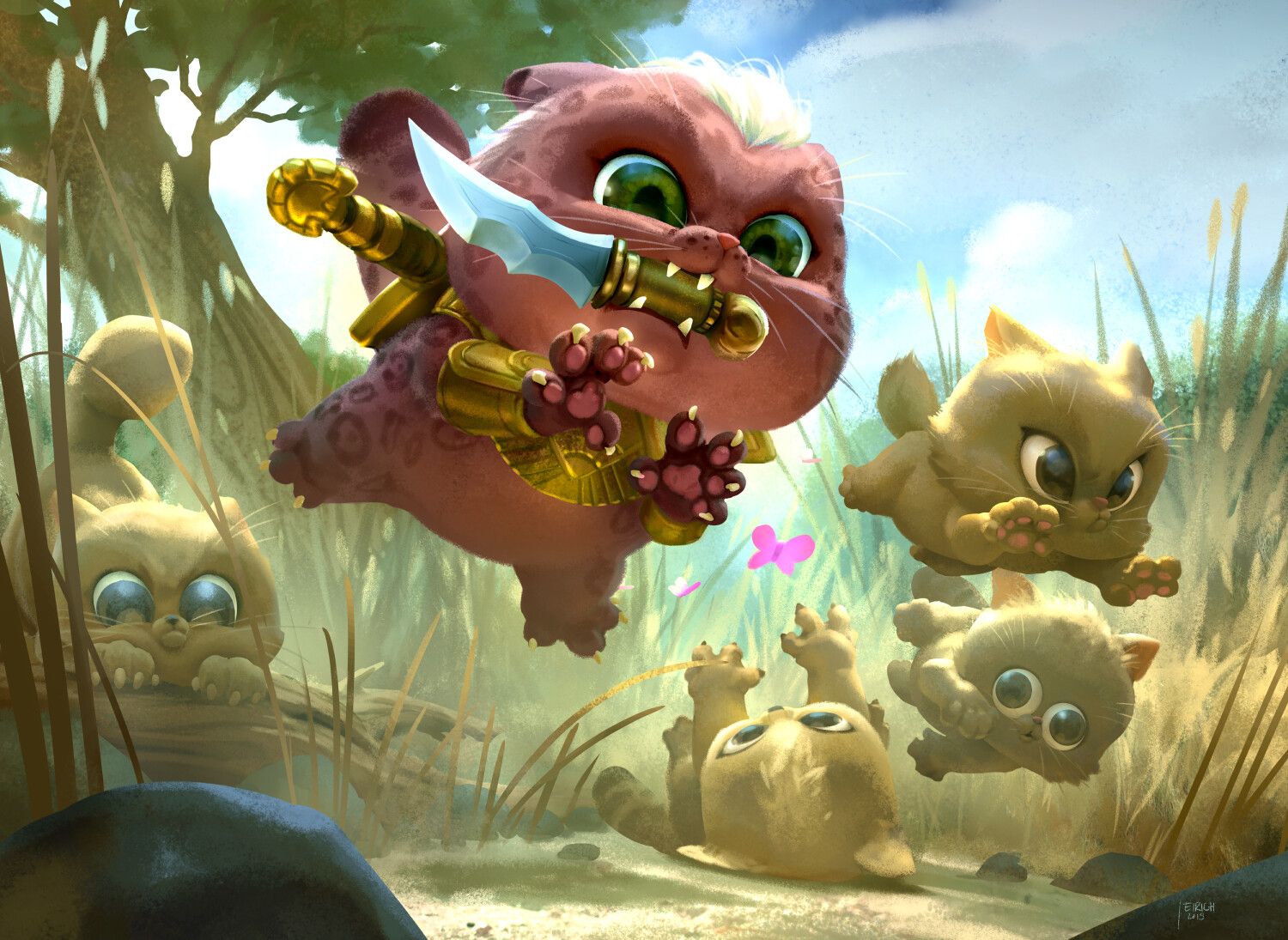 The Kitties SLD is a fantastic use of adorableness in Magic. There are a lot of cats in MTG, but they're rarely this cute. What I especially love about this set is how each piece mimics the original art for each card, just with the cuteness dialed up to 11. Andrea Radeck's Mirri, Weatherlight Duelist and Jakob Eirich's Leonin Warleader are the standouts for me here, but I also really appreciate the two cat tokens taken from the respective artwork of the cards that make them. 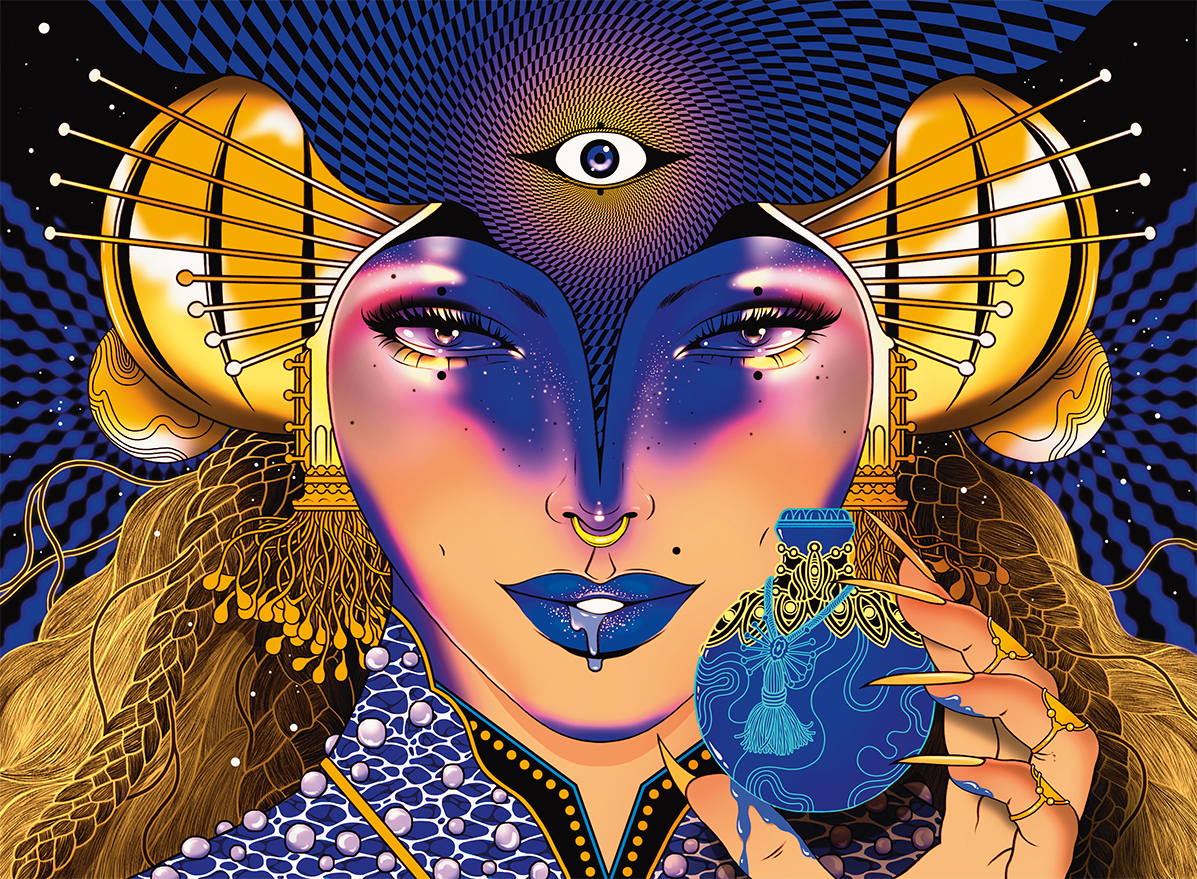 Serum Visions is well known for the *ahem* questionable choices made in some promo versions, but this set goes fully-on trippy in its interpretations. My favorite is the pixel graphics version by DXTR, but they all feel like an especially potent acid trip.

Year of the Rat Ink-Eyes, Servant of Oni by JungShan

2020 is the Year of the Rat on the Lunar Calendar, and this SLD celebrated with famous Rat cards from Magic's history. While Pack Rat and Rat Colony got absolutely gorgeous pieces that I would happily hang in my home, it's the Kamigawa Legends that really struck me. Marrow-Gnawer was an ugly card, so getting a newer version where he's cute and happy and with his little rat family is precious. But the real gem of this drop is Ink-Eyes, Servant of Oni who sold the drop for me. The ink wash painting is just absolutely gorgeous here, conveying mood and movement in a style appropriate for the Japanese flavor of Kamigawa. I would love to see more Kamigawa reprints in this style, especially Toshiro Umezawa or Myojin of Night's Reach. 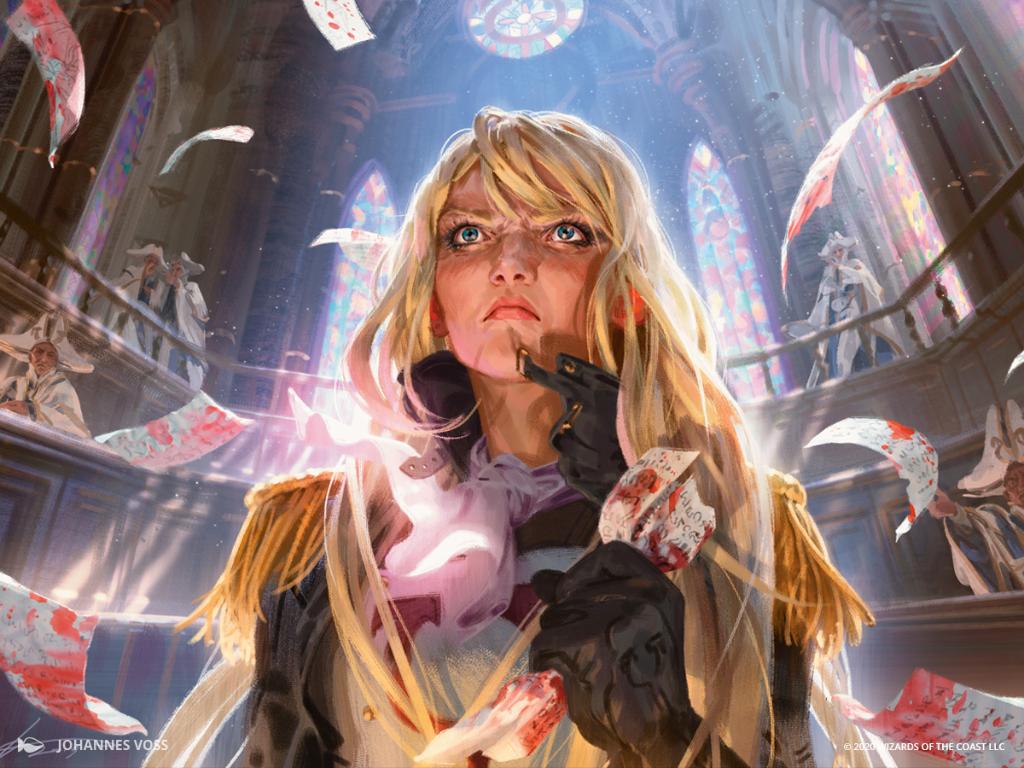 The Thalia SLD is probably my favorite from a purely story-centric perspective. It consists of four different pieces each depicting Thalia, Guardian of Thraben at a different point in her life. This is absolutely the kind of thing I'd like to see more of, artwork variants on popular and enduring characters that give a full playset. We see Thalia surrendering to Liliana of the Veil and letting the Helvault get destroyed rather than sacrificing her people to save it. We see Thalia's frustration with the Lunarch Council and the blood-stained papers floating around her perfectly capture the mood of that moment. We see her allying herself with the Geist of Saint Traft, and then finally slaying Eldrazi armed with the Moonsilver Spear of Avacyn.

That's all for today, folks! I hope you enjoyed the flavor of these Secret Lair Drops as much as I do. I know Secret Lair Ultimate, April Fools, Theros Stargazing, and International Women's Day have been revealed or released at this point, and believe me, I'll get to them. They'll be part of my second article on Secret Lairs a few months from now, once we've seen a few more to be able to flesh out a full article.