Welcome back, lore seekers! Today I'm going to be taking a look at the biggest legends of Modern Horizons 2, the deep lore characters from materials out-of-print for decades. I might miss a few, as more may be previewed since this was written, but there's already more than enough here for a full article. Let's dive in!

You know, when I wrote about The Blackblade-Dihada War a few weeks ago, I was expecting a new Dakkon Blackblade card, and maybe one or two references. I was not expecting for nearly every character from his story to get a card. 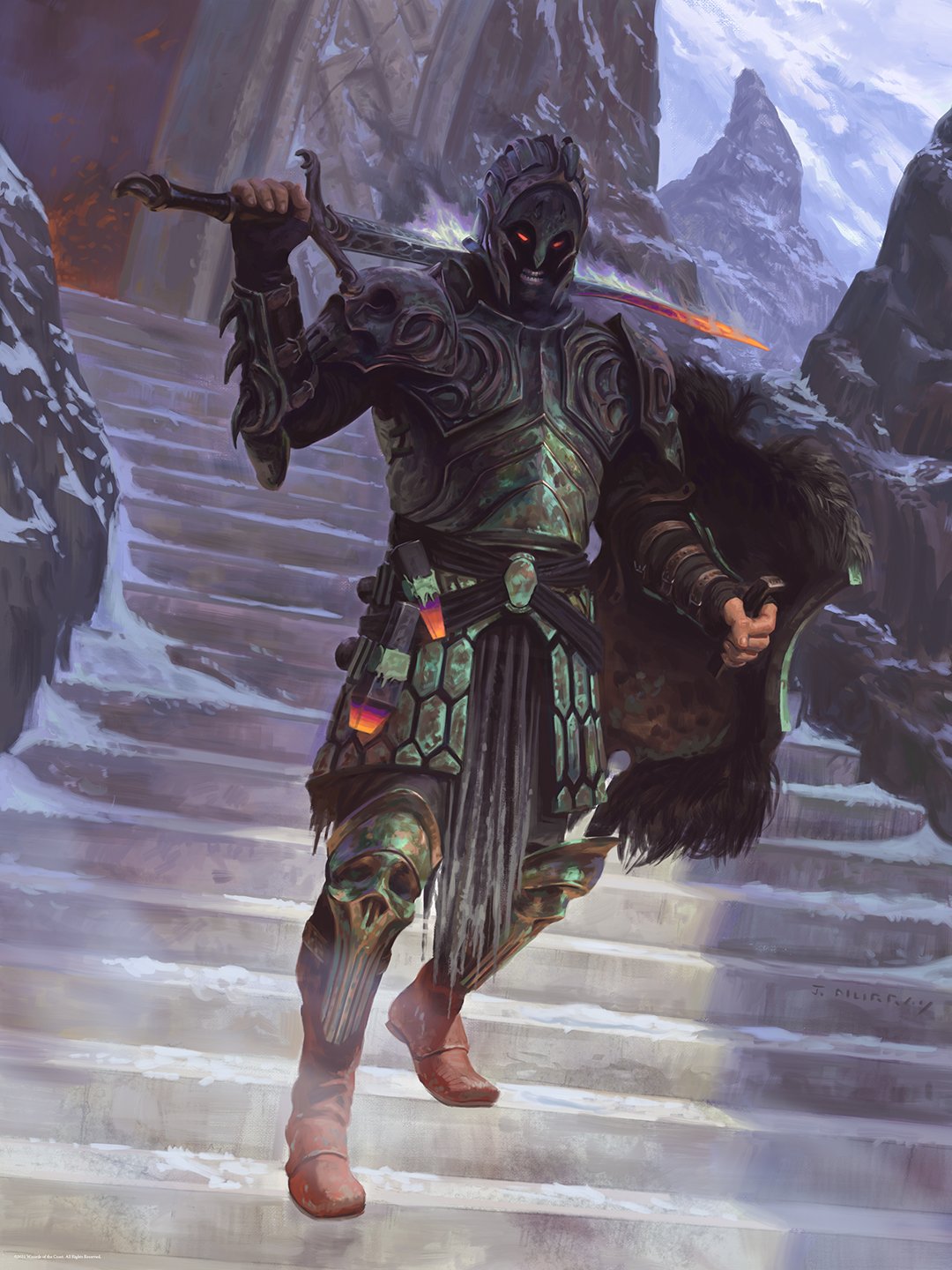 On the planeswalker side, we got Dakkon, Shadow Slayer with new Richard Kane Ferguson art, in what has become something of a tradition for Blackblade-related cards since the pre-release Korlash, Heir to Blackblade. As did Profane Tutor, which features Dakkon forging the Blackblade at the behest of Geyadrone Dihada, who also gets a card. 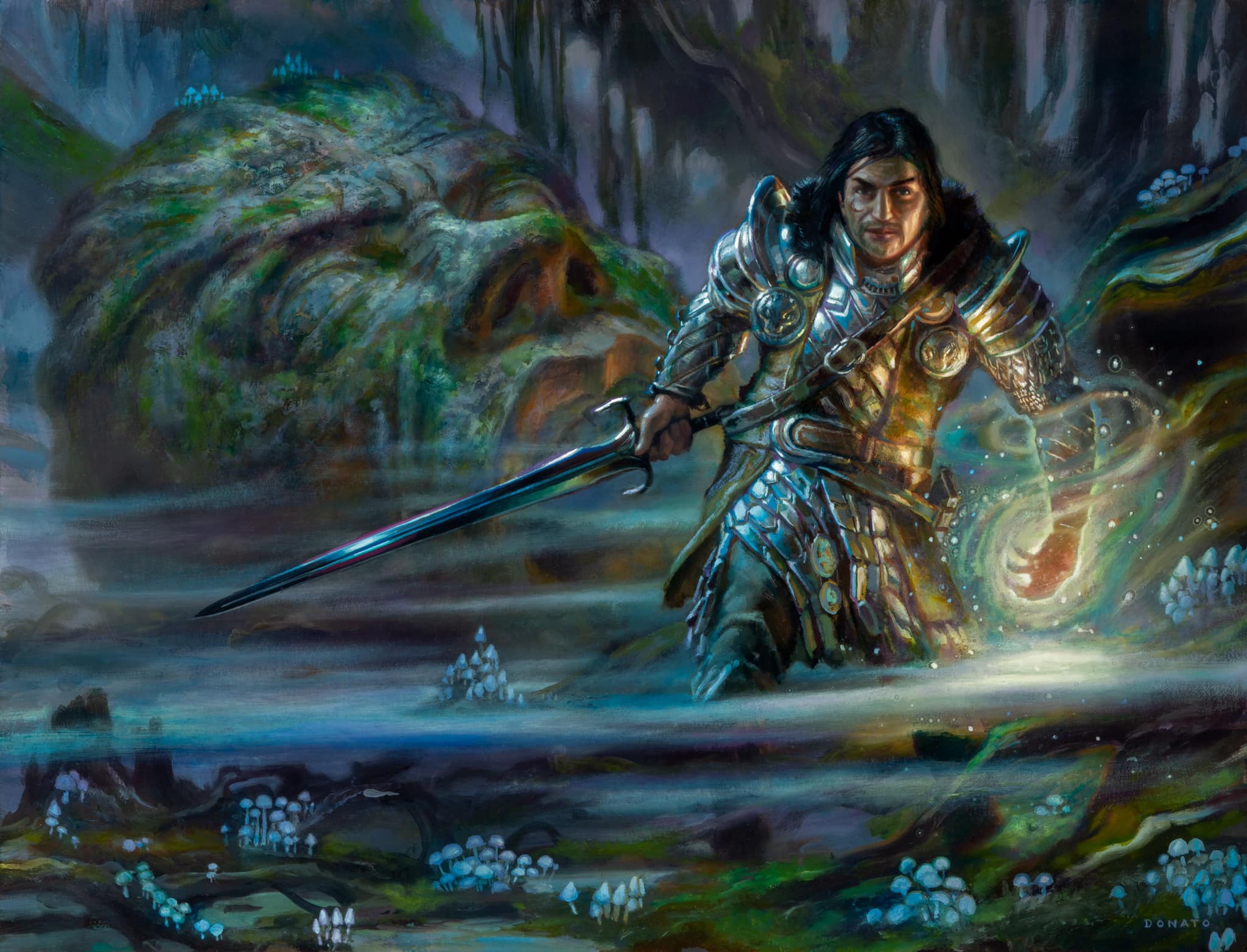 Carth the Lion by Donato Giancola

On the creature side, we get the original sixth elder dragon, Piru, the Volatile! I talk a little about Piru way back in Elders of Dominaria and more recently in Elders Revisited, but even still I genuinely never expected to get her on a card. Why is it that every time I write one of these elder dragon articles, it immediately needs to be updated. In any case, Piru's card has some excellent flavor, referencing the moment of her death which created an explosion so large it formed a massive canyon known as the Dueling Chasm of Golthonor. We also get Carth the Lion, founder of the Carthalion lineage, with abilities tied to his relationship with planeswalkers! All we're missing now is a new Sol'kanar the Swamp King and we've got Modern versions of every character from his story. If you want to know more about these legends, read the Blackblade article above 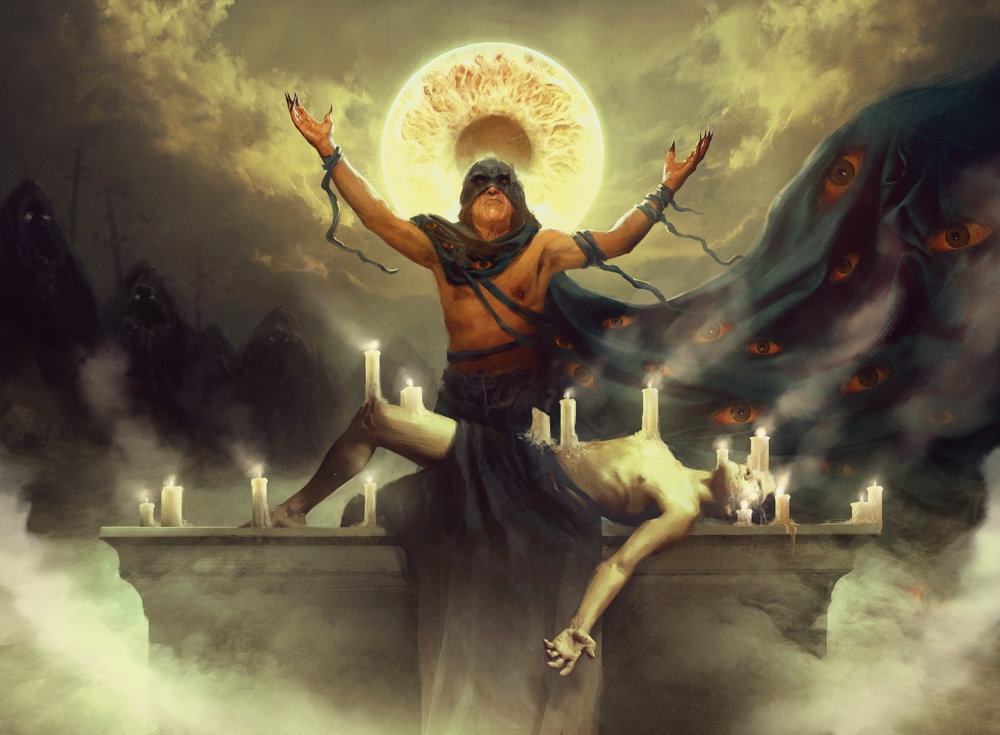 In a neat turn, we get not one, but two founders of the factions from Fallen Empires. Tourach, Dread Cantor broke off from the Icatians and founded the Order of the Ebon Hand, which worshipped the Ebon Praetor. After his death, however, the order deified him as well. He's well known for cards associated with religious chants, and we add a new one in this set with Tourach's Canticle. 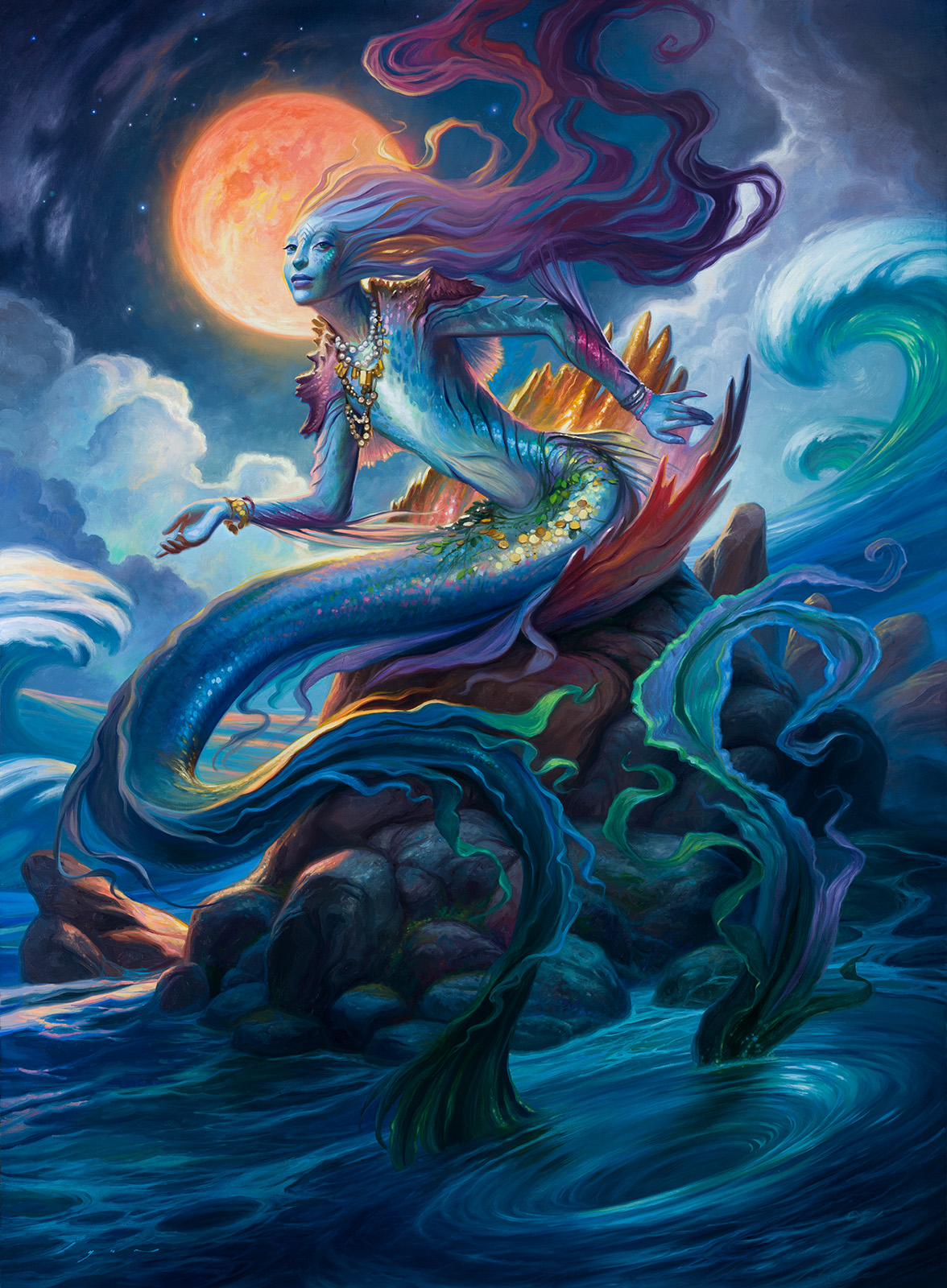 Svyelun of Sea and Sky by Howard Lyon

Svyelun of Sea and Sky is the Dominarian merfolk goddess, also known as the goddess of the pearl moon. She's a hands-off god, having not interfered with merfolk society since creating the Vodalians from silt and saltwater and leaving them with her words. Those words now form the basis of the Svyelunite religion. While it wasn't always this way, the modern Svyelunites tend to be fervent Vodalian nationalists. The Pearl Trident are a sort-of paladin order in her name. 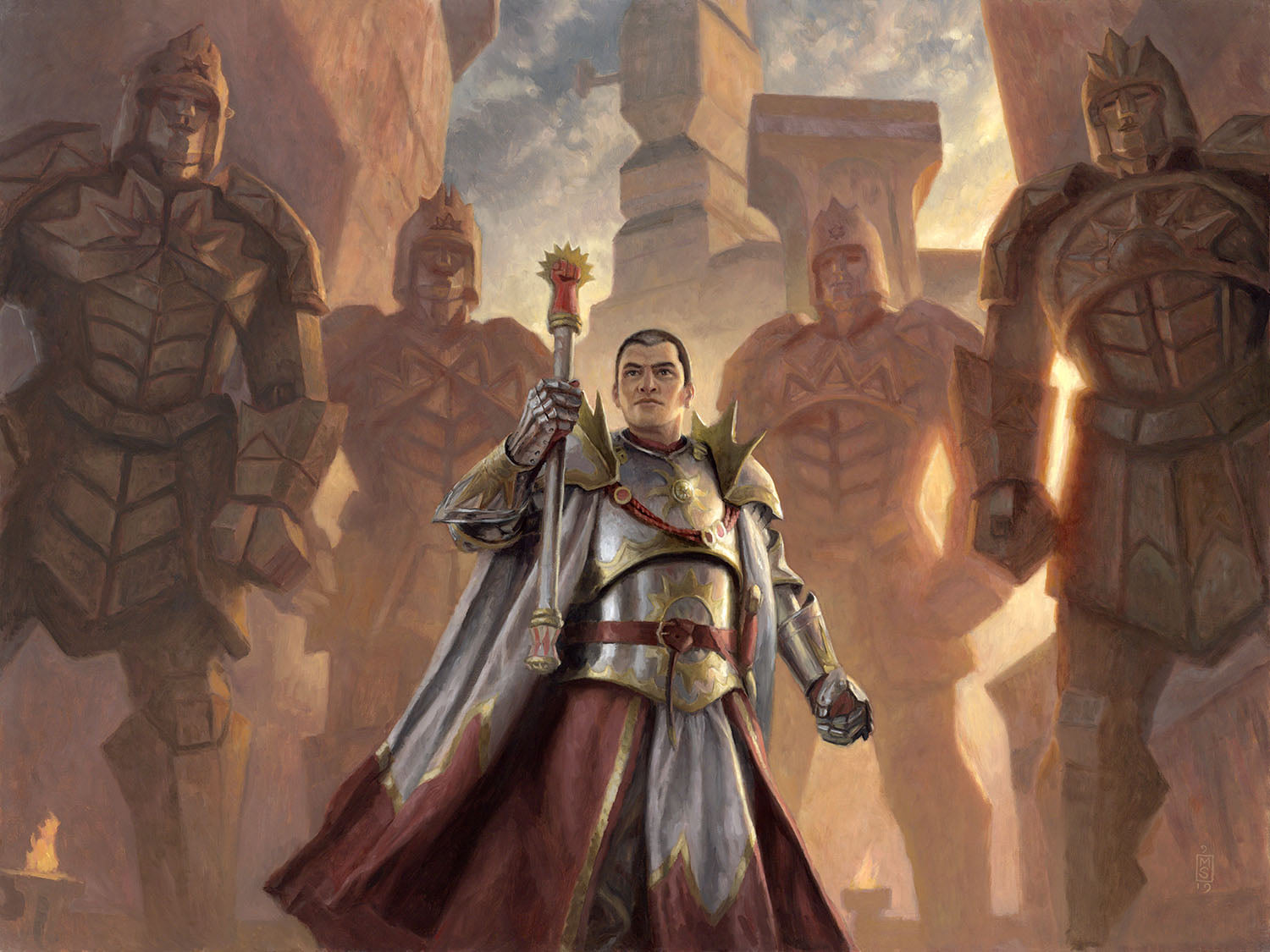 General Ferrous Rokiric is a historical figure from Ravnica. First (and only) mentioned in Ravnica: City of Guilds as the namesake of Rokiric Pavilion, we learn that Ferrous Rokiric is responsible for the guardian statues around the Tenth District, WAY back in the 4th century after the Guildpact was signed. For reference, the modern day is over 10,000 years after the Guildpact was signed. So Rokiric is a deep cut reference to a deep cut in-universe reference. We're getting him before two main characters from that book get cards. Asmoranomardicadaistinaculdacar was a name that first appeared on Granite Gargoyle in Limited Edition Alpha flavor text, and then later in Saute and Lightning Axe. We now have a card for her, as well as several more references in the set, including Kitchen Imp, Discerning Taste, Chef's Kiss, and The Underworld Cookbook.

Asmor, as her name is usually abbreviated to, is from the short story Chef's Surprise in the early MTG anthology Distant Planes. In the story, Asmor's tavern is attacked by an ogre with a bone to pick about how her recipes have resulted in his kind being hunted. We get a flashback to how this came to be, with Asmor summoning a demon lord named Vincent, but failing to have the requisite sacrifice. In order to stay alive, she enters into his service as a chef for seven years and seven days. If she ever serves a dish that bores him, their deal will be forfeit and he'll eat her instead. After four years of the most outlandish, disgusting recipes you can imagine, it turns out Vincent loves her cooking. He asks her to write a cookbook, so when she leaves his next cook can make the dishes he loves. Asmor makes 20 copies of The Underworld Cookbook, but the only people to buy copies are her mother and Vincent.

Well, when her lazy Kitchen Imps are told to dispose of the extra copies, they dump it in a trash chute that spits it out into the overworld instead. When Asmor's time is up with Vincent, she returns from hell to find her recipes are all the rage with the bored nobility of the world. The various creatures in the cookbook are understandably frustrated with her for getting them all hunted. Fast forward to the ogre. Asmor and the ogre talk and come to an understanding. She'll write a new book with the ogre as her business partner, but this cookbook will feature all the elf, dwarf, and human elites who've been enjoying the last book. It's a fun story that's definitely worth a quick read, if you can find it. 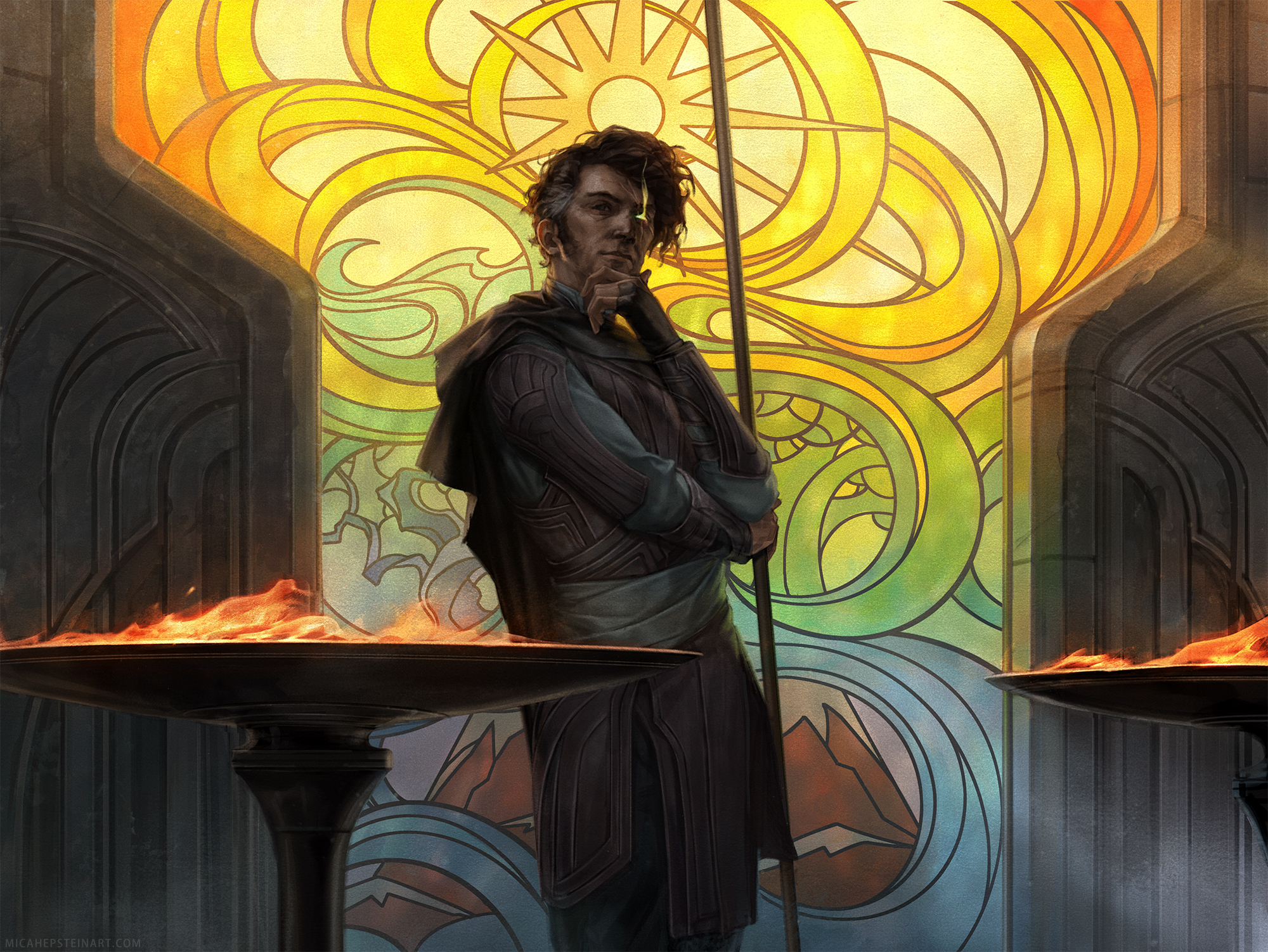 Garth One-Eye is the very first Magic novel protagonist, from the book every old school Magic player won't shut up about decades later: Arena! We're getting his Legendary Creature card here, but I should note he was also a planeswalker... although what constituted a planeswalker was very different while this book was in print.

Here's the gist of Arena. A stranger (Garth) comes to town the week of the Festival of Estark, a tournament where the winner is chosen by a being known as the Walker to travel the multiverse. Garth is a powerful mage unaffiliated with the four houses who sponsor fighters for the tournament. Garth worms his way into the houses, playing them off each other, and eventually sets off a riot, which is put down by the Grand Master of the city, Zarel. It is revealed that Garth is the scion of the fifth house, which was destroyed by Kuthuman, now known as the Walker, in his bid to ascend as a planeswalker. With Zarel's help.

On the final day of the tournament, Garth wins and is taken away by Kuthuman, who reveals that he simply murders the strongest fighter every year, to prevent any mage from getting strong enough to challenge him. Kuthuman is distracted by an ongoing battle with another planeswalker, which allows Garth to gather enough power to become a planeswalker himself (the rules worked differently back then). Garth returns to Estark, where he defeats Zarel before disappearing. Three years later, he returns, having defeated Kuthuman.

I'm going to be honest with you here. While the prose of the book is pretty good, the book itself is pretty sexist in the way much of 90s fantasy was. You've also definitely heard this story before, as it's as formulaic a revenge story as they come.

Garth appears again briefly in Shattered Chains, where he's become something of a magic addict who spends most of his time wandering the planes, before giving up his satchel of magic amulets to another character and settling down as a mortal with his love interest.

If you want to know more, I highly recommend Berend Boer's Multiverse in Review articles on Arena and Shattered Chains.

That's it for this week, folks! I'll be back in another week with the Flavor Gems of Modern Horizons 2!