Welcome back to Building with Flavor! In my original article, I described the tools at your disposal to build the most flavorful deck possible. Today, I'm back with the Legendary Creatures of Commander 2019! There's a lot to cover, and not a lot of time to do it, so let's dive in! 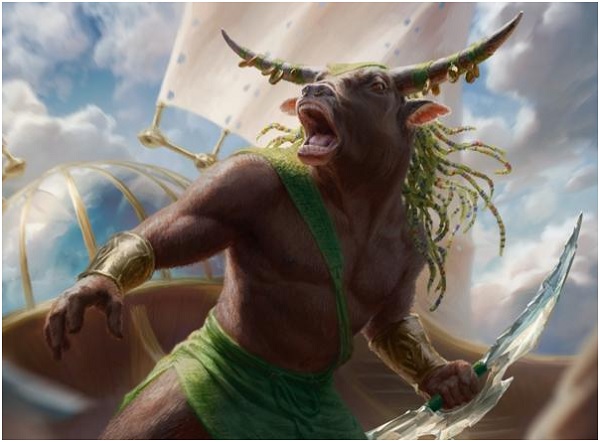 When writing for Sisay, Weatherlight Captain, I pretty much identified all the big Weatherlight tentpoles, but given that Tahngarth, First Mate isn't five-colors, it's worth diving in with a little more specificity on Tahngarth himself. You can always refer to Sisay's article for more broad strokes cards, but Tahngarth is a different beast (or minotaur) altogether.

First off, Tahngarth begs for a more Voltron-y approach as your Commander. As a black border Party Crasher, there's all sorts of fun to be had with Tahngarth that just aren't possible with other Voltron Commanders, even with Assault Suit. Let's look at Tahngarth's abilities, here.

Tahngarth, First Mate can't be blocked by more than one creature

Right away there are some pretty strong directions to build around here. The fact that Tahngarth can't be blocked by more than one creature, and that he can attack any time a player attacks? Keep that in mind. But remember that you have to attack with Tahngarth, or otherwise cause him to be tapped, in order for that triggered ability to work. Whatever you do, don't give him Vigilance.

The minotaur Tahngarth was one of the first members of Sisay's Weatherlight crew and her dutiful, if impulsive, First Mate. I talked about his story quite a bit in Commander 2019 Flavor Gems: The Weatherlight Saga, so I'm not going to go into too much detail here. He was kidnapped by Greven il-Vec and mutated on Rath, so he looks a bit different between his early appearances and the rest of the Weatherlight Saga. Let's talk about his most flavorful cards:

With the main flavor out of the way, let's look at some other good cards for a Tahngarth Voltron build. Unfortunately attack triggers don't work with Tahngarth's attacks on other turns, so effects that look like they would be awesome (like Tahngarth and Mage Slayer) aren't quite as strong as you might like.

The various Swords, which I'm not going to list here, trigger on combat damage. Play them if you got them, you're going to get ridiculous value out of them. I'm not including them in this deck, because it gets a little silly after a while, but I am including the ones I think mix both their combined utility and reasonable price.

Also, if you can make Tahngarth unblockable, that always helps too.

One of the key's to Tahngarth's success over other Voltron Commanders is forcing the attacks of other players. Make sure to include plenty of cards that make sure at least one of your opponent's creatures will attack each turn! In some cases, just encouraging them to attack is enough.

Like Sisay, this is not an optimized decklist, nor is it meant to be. It's meant to be a starting place for your own deck, with the flavor already baked in.

Oh, and speaking of Sisay, I think between Gerrard and Tahngarth, it was worth taking a second look at her deck. I've changed the mana base significantly, moving away from the fetch/dual heavy land base to a more flavorful one, full of Titus Lunter's Weatherlight lands from Dominaria and other flavorful additions.

Thanks for reading! Next time I'll be back with Greven, Predator Captain and the flavor of Phyrexia!