Welcome back, Lore Seekers! Today I'm going to give you some short bios of the various Legends of Innistrad (creature and planeswalker alike) as we continue our coverage of the return to Innistrad! I don't want to waste too many more words on an intro, so let's dive in!

Humans and the Undead

Humans are the not-monsters of Innistrad. If you need me to further explain humans to you, I'm not sure I can really help you. 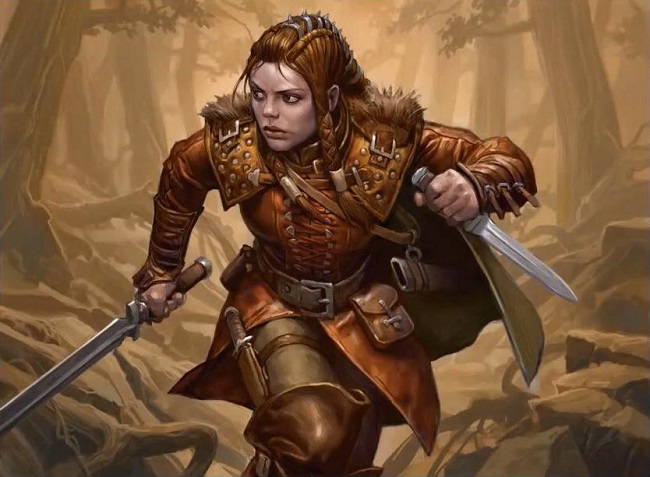 I'm grouping Hal and Alena together here because they're both partners, working together to stop monsters preying on people in rural Kessig, and partners who are in love. While they don't appear much in story, they made a big splash in Shadows Over Innistrad with a great introductory story and a lot of great flavor text. They finally received cards last year in Commander Legends... with the partner mechanic, no less. 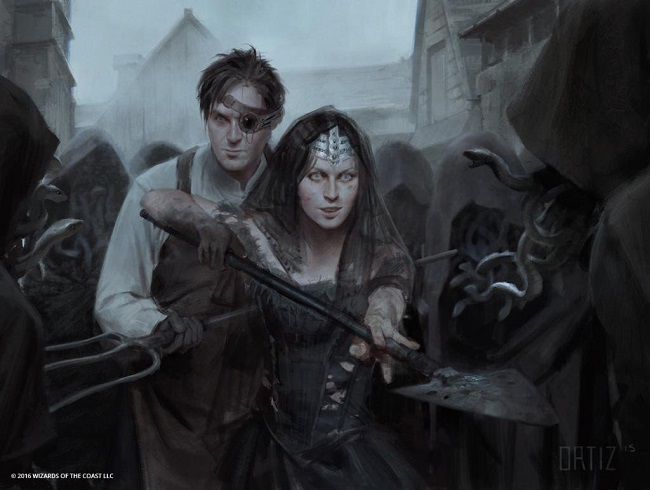 Gisa and Geralf by Karla Ortiz

Gisa and Geralf are twins who bring sibling rivalry to another level. Petulant and spoiled, they destroyed their home town in their ongoing necromancy war. Each of the siblings focuses on one of the necromantic disciplines of Innistrad. Gisa is a ghoulcaller, a traditional, magical necromancer, while Geralf is a Stitcher, an alchemist in the vein of Doctor Frankenstein. These two starred in a couple of the short stories of the original Innistrad, which would eventually give birth to Uncharted Realms and the regular online magic fiction we know today.

When Gisa and Geralf teamed up, Geralf's Skaab masterpiece (named Grimgrin, in honor of Gisa's face) led the charge. The hulking monstrosity was destroyed in the battle of Thraben.

Ludevic is Innistrad's actual Doctor Frakenstein. The preeminent necroalchemist of the day, Ludevic has created all manner of abominations, and is currently mentoring Geralf. Ludevic himself hasn't appeared in a story other than as the author of a letter, but as the analogue to a major gothic horror literary figure, he looms large in our imaginations.

Kraum is a Skaab created by Ludevic - there's really not much else to say about him.

References: Preview Article: Mikaeus the Unhallowed, The Prison of Silver, The State of the Faith, The Guardian, the Witch, and the Angel, Angel's Rise and Demon's Release, Creative Text References

Mikaeus was the pontiff of the Church of Avacyn during the original Innistrad block. He witnessed Avacyn's battle with Griselbrand, and attempted to cover up the nature of her disappearance. He was killed in Gisa and Geralf's siege of Thraben, only to be resurrected by Liliana who had questions for the pontiff. He was distantly related to Gisa and Geralf, a relation that likely had a lot to do with the church looking the other way to their earlier crimes. 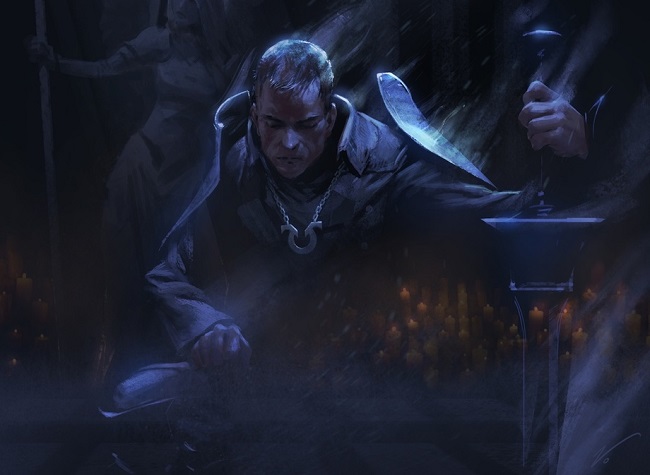 Geist of Saint Traft by Izzy

References: The Saint, the Geist, and the Angel, The Lunarch Inquisition, Saint Traft and the Flight of Nightmares, Creative Text References, Art References

Saint Traft died years ago in a demon's scheme, but his work was unfinished and his will was so strong that his geist held on to the mortal plane, a benevolent protector of the innocent even in death. During Emrakul's invasion of Innistrad, Traft met Thalia, and together they formed the Order of Saint Traft, a renegade cathar order that used the power of benevolent geists to stave off the effects of Eldrazi corruption. 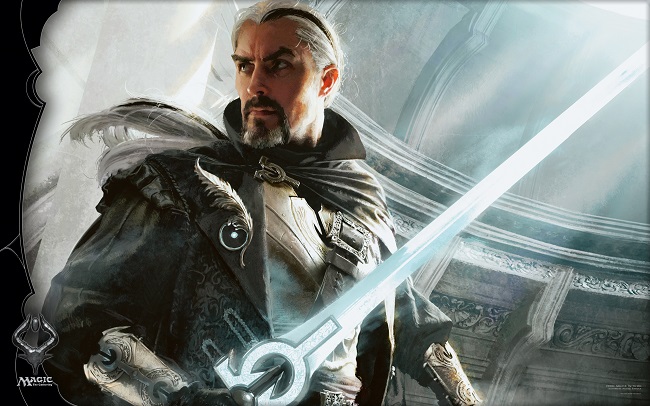 Odric was the leader of the Gavony Riders, but after the last Lunarch was assassinated, the Lunarch Council was formed and made Odric their marshal. Odric didn't believe at first the atrocities the church was committing under their corrupted angel, but when confronted with the truth he helped Thalia and his old lieutenant, Grete, escape. Broken by the experience of everything he believed in being corrupt, he sat out the final assault on Thraben and the Eldrazi scourge. 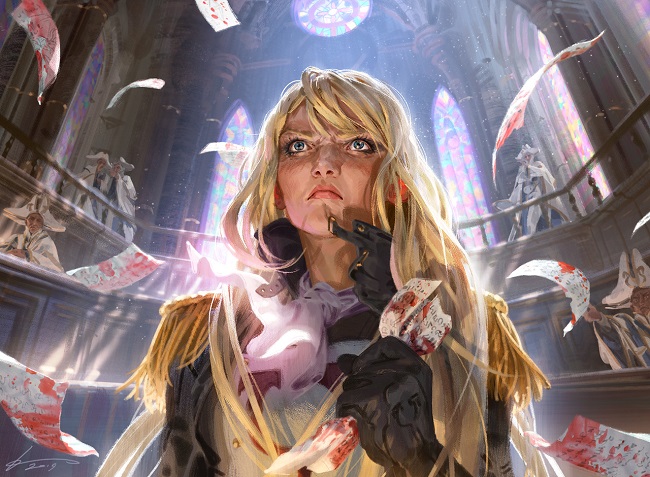 Thalia was second-in-command of Thraben's guards when Gisa and Geralf attacked with their undead horde. Her commander was found dead, and she was thrust into leading the defense as the upper echelons crumbled around her. She lured in the undead and burned the outer ring of the city, destroying the invading army. She would get no relief, however, as Liliana Vess showed up, using Liliana of the Veil's ultimate to force her to choose between the Helvault and her surviving soldiers. She chose the soliders. Later, she's one of the first to go rogue as Avacyn turned on humanity, allying herself with the Geist of Saint Traft and leading the defense of the plane against the Eldrazi.

Angels on Innistrad are one of the few rays of hope for humanity. There were originally four archangel sisters, each with a different domain. Upon the creation of Avacyn, one of those archangels was destroyed for consorting with darker forces. Each of these five archangels led an angelic host, called a flight. 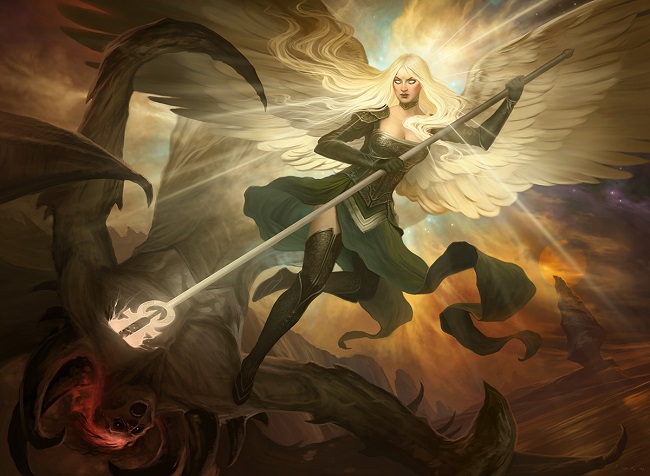 References: The Prison of Silver, Angel's Rise and Demon's Release, The Hunter Cannot Pity, The Lunarch's Journal, A Gaze Blank and Pitiless, Promises Old and New, Stories and Endings, I Am Avacyn, Stone and Blood, Creative Text References, Art References

Archangel Avacyn was created 1,000 years ago by Sorin Markov as a check on the gluttonous impulses of the monsters of the plane. Avacyn carried out her duties faithfully - if overzealously, until during a duel with the demon Griselbrand trapped her in the Helvault. She was freed when Liliana Vess destroyed the Helvault to get at Griselbrand, only to succumb to the machinations of Nahiri, who lured Emrakul to the plane and corrupted the angel. Sorin was forced to unmake Avacyn to keep her from destroying what she was meant to protect.

Gisela was the martial archangel, leading the warrior-angels of Flight Goldnight. She was closest to Avacyn and hardest hit by Eldrazi corruption, fusing with her sister Bruna to becoming the abomination Brisela, Voice of Nightmares. Brisela was slain by Thalia and Traft wielding Avacyn's spear.

Archangel Bruna and Flight Alabaster were responsible with ensuring humans could achieve the blessed sleep, and shepherding souls into the afterlife. When Emrakul arrived on the plane, she was corrupted and fused with her sister Gisela to become the abomination Brisela, Voice of Nightmares. Brisela was slain by Thalia and Traft wielding Avacyn's spear. 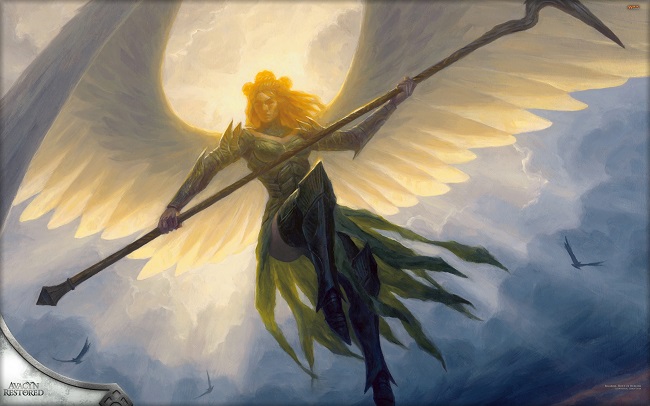 The last surviving archangel, Sigarda and her Flight of Herons represented purity. When the other angels began to go mad, it was only Sigarda who stood for humanity. The church has since splintered, with a sect of Sigardians worshipping her exclusively as she continues the fight for humanity.

References: A Gaze Blank and Pitiless

Liesa, the mysterious fourth angel sister, was killed early on by the uncompromising Avacyn. Liesa was killed after consorting with a demon - in the service of the greater good, but Avacyn's unyielding nature forced her to destroy her.

That's it for this week - tune in next week as we talk about the monsters and fiends of the plane!