Welcome back, Loreseekers! I know I've been gone for a few months, but with a second Innistrad set there wasn't as much to say to prepare you. And... you know... I went and had another kid in the meantime. And worked on secret projects I can't talk about for *checks watch* a long time. But I'm back, and we've got a major return on the horizon, so let's dive in!

The Plane of Kamigawa 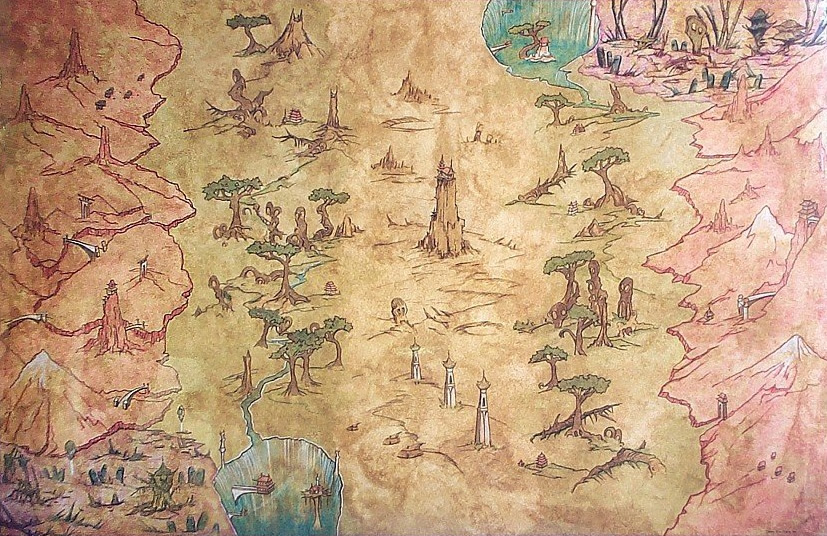 This is not an accurate map of Kamigawa.

Almost everything we know about Kamigawa is from about 1,300 years in the past. The original Kamigawa block, despite being printed between Mirrodin and Ravnica, took place well before either of them. As was the case back then, it featured some major shake-ups to the plane, and as a result what we'll see in Neon Dynasty may look very different from the original block.

Kamigawa, at its core, is a plane divided between two realms: the spirit realm, and the material realm. The spirit realm is home to kami, divine beings that represent the natural forces of the world. The material realm is the home of mortal beings. Magic on Kamigawa flows through the kami, and practitioners of magic needed a patron kami to become stronger (or in some cases, an oni, or demon spirit). The human society of Kamigawa in ancient times was centered around the domain of Konda, Lord of Eiganjo, an old warlord who successfully united all the disparate kingdoms of humans under his control. Konda's domain was centered around Eiganjo Castle but spread out through the plains of Towabara.

Kamigawa is also home to a few unique varieties of people. The kitsune, or foxfolk, are a long-lived people who generally lived in small bands on the plains and in the forests. The kitsune have a reputation for wisdom and mischievousness in equal measure. The nezumi, or ratfolk, typically lived in the swamps of Takenuma, while the goblins of the plane, called akki, lived in the mountains of the Sokenzan range alongside bandit raiders and all sorts of other creatures like ogres. In the clouds above the rest of these people floated the city of Otawara, home to the soratami, or moonfolk. The moonfolk were nearly mythical on Kamigawa, rarely descending to the world below. The closest they came was a distant relationship with the Minamo Academy, a school for wizards, above which their city resided.

The History of Kamigawa 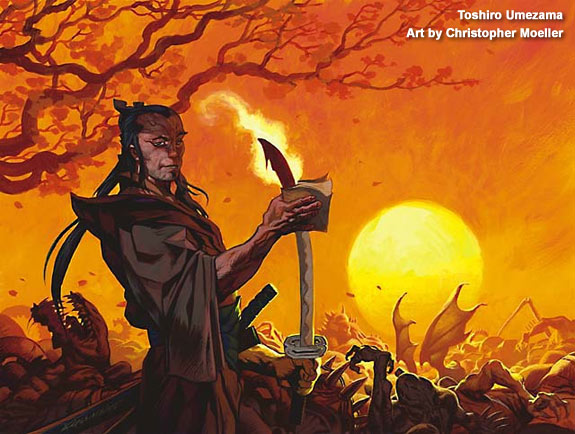 Twenty years before the beginning of the story proper, on the day of the birth of his daughter Michiko Konda, Truth Seeker, Lord Konda pierced the veil between the spirit and material realms and stole something from the supreme Kami on the other side, O-Kagachi, Vengeful Kami. The theft of the aptly named That Which Was Taken resulted in the kami turning against most of the mortal peoples of the plane, and thus the Kami War began.

Twenty years later, Toshiro Umezawa stumbles across a moonfolk plot while trying to make some gold. He's hunted for it, and gets entangled in various oaths along the way, from his Hyozan Reckoner oath with Heartless Hidetsugu, to his pact with the Myojin of Night's Reach, and his pledge to Michiko Konda, Truth Seeker.

Hidetsugu wants to summon his patron oni, the All-Consuming Oni of Chaos. His apprentice is killed by conspirators behind the moonfolk plot, which requires any other reckoners to fulfill vengeance on those responsible for his death. This path leads Hidetsugu to assaulting the Minamo Academy itself. He wants Toshiro to help him destroy everyone responsible.

The Myojin of Night's Reach wants to take advantage of O-Kagachi's distraction with the war to slip away and expand her power on other planes - something she couldn't do if the guardian was focused on protecting the barriers between the realms. She wants Toshiro to prolong the conflict so that she can continue to do so.

Michiko Konda wants to find the truth of her father's crime and set things right, and wants Toshiro to help her do so. Toshiro does his best to navigate these conflicting oaths, but as things come to a head, O-Kagachi himself manifests on the plane, destroying Lord Konda's kingdom. Hidetsugu, from the wreckage of Minamo, summons the All-Consuming Oni... only for it to flee when O-Kagachi proves too powerful for it. Enraged that he has devoted his life to a coward, Hidetsugu pursues the weakened Oni into its realm and takes its power for himself.

Michiko escapes with That Which Was Taken, which awakens into a kami in its own right, Kyodai, a draconic twin of Michiko. With Toshiro's help, the mortal and kami twins defeat Konda (turning him to stone) and then O-Kagachi, assuming the supreme kami's role as the guardians of the plane. But with O-Kagachi's death, the fabric of the world begins to change, and the fundamental nature of magic on the plane is said to change with it.

The moonfolk plot, supported by their patron kami, Mochi aka the Kami of the Crescent Moon, was to take control of the plane in the chaos caused by the kami war. Mochi appears before the new guardians of the plane to beg for their favor, but Toshiro summons Hidetsugu, now merged with his patron oni, who consumes the little kami ultimately responsible for his apprentice's death, fulfilling Toshiro's oath.

Night's Reach is furious with Toshiro, not only did he disobey her, the new status quo will significantly disrupt her powers and influence. She blinds him as a punishment and dumps him on Madara on Dominaria. Generations later, his descendant Tetsuo Umezawa will trick and kill Nicol Bolas, Planeswalker.

You can read a more detailed plot summary in my two older articles on Kamigawa, The World of Kamigawa and A Reckoning on Kamigawa.

The Side Stories of Kamigawa 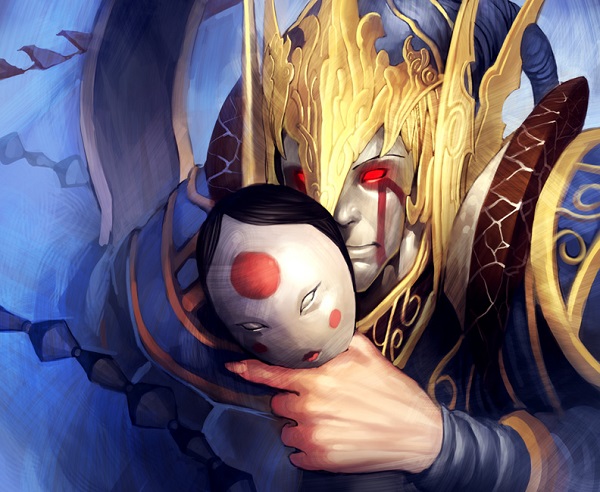 While the main story only features a handful of the 118 Legendary Creatures of the set, there were twenty pieces of web fiction that covered a decent chunk of the rest (each usually featuring two or more Legends). I can't possibly summarize them all here, but I will recommend to you my favorites. In my opinion, the best stories are Eight and a Half Tails, The Dragon's Errad, Bonds of Ice and Fire, The Sound of Crickets, and the Face Behind the Mask. 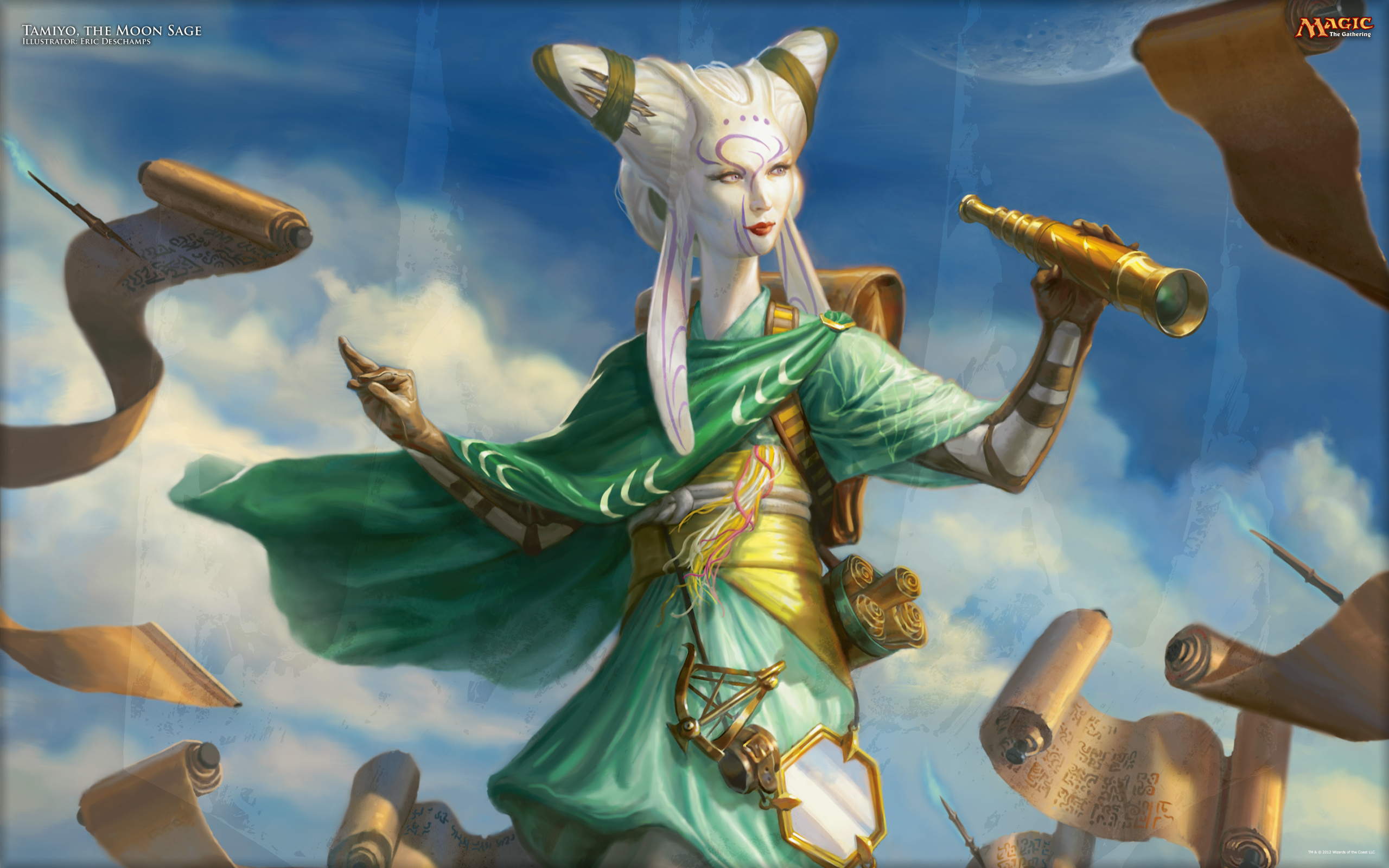 Around the time of the Mending, Nicol Bolas is resurrected and vows vengeance on the Umezawas and all who helped them. To save her life, Night's Reach imbues Leshrac Nightwalker with her mask to defeat Bolas, since they share an affinity for the night. Leshrac fails, and Bolas scourges Night's Reach and all the Umezawa's he can find (he misses at least one, as sixty years later Tetsuko Umezawa, Fugitive still escapes him). During their battle, however, twin guardians of Kamigawa appear to Leshrac and bar him from entry to the plane.

In more recent years, we've only got glimpses at Kamigawa: a backwater ratfolk village and the inside of Tamiyo, Collector of Tales house. Our first glimpse comes from Agents of Artifice, where Jace Beleren works as an agent of Tezzeret the Seeker's Infinite Consortium, which has a cell on Kamigawa. Jace and a cruel pyromancer planeswalker named Baltrice head to the aforementioned ratfolk village. The village is on prime real estate, and Tezzeret has arranged for a coup to replace the current shaman with the shaman's son, who is more amenable to Tezzeret's demands.

Upon arriving, the mission immediately goes sideways. The shaman had discovered Tezzeret's plot and killed his treacherous son. Jace and Baltrice are ambushed, and Baltrice burns down the village in retaliation, killing most of the residents. This event precipitates Jace's escape from Tezzeret's organization, as he's learned there is no depravity Tezzeret won't commit for power.

In Release, we later learn that a young ratfolk child named Nashi survived the attack on the village (although with some burns) and was adopted by Tamiyo's family, living with them in their house on Otawara. And that's really all we've seen of the plane... until now! I'm looking forward to diving into the modern version of Kamigawa and exploring what has changed, and what hasn't, in the last millennia.