It is that Magical time that comes four times a year in - a new set is on the horizon for Magic and brews are in the air. The upcoming Ravnica Allegiance set will not only bring with it a slew of interesting cards, but it will also be bringing the other five shocklands to Standard. This means in addition to various new decks that will be possible, old archetype that lacked a bit of consistency in their mana will also get a huge boost.

As someone who reads a lot of articles this time of year, I know the thing people want most is simply the raw ideas to get testing - so today I am going to do a decklist dump of a bunch of the ideas I have been jotting down and talking about why I think they might be interesting.

To start - I would like to share my first draft of one of my favorite archetypes - an all instant speed "Flash" deck:

This archetype really has a great selection of tools. From our second coming of Mystic Snake in the printing of Frilled Mystic, to the instant speed sweeper effect we have had for some time in Settle the Wreckage. This should be an incredibly powerful Settle deck because it will never be obvious when we pass the turn with the sweeper at the ready. We could simply be holding up a counterspell, Chemister's Insight, or a creature. In addition to Mystic, RNA gave us another slick flash threat: 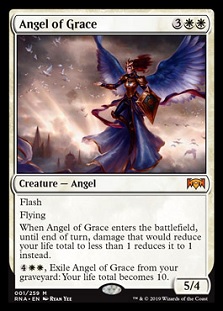 Depose // Deploy really feels like a card that was designed with an archetype like this in mind. Depose can generate some tempo in the early game, while replacing itself. Deploy buffers our health total and creates addition threats to allow us to win races in a variety of different ways.

One thing I am uncertain of in this initial draft is the higher land count with the inclusion of Growth Spiral. Our curve overall is a bit high, so getting to our 4 mana spells ahead of curve feels appealing. The fact that we are playing four copies of Chemister's Insight also means that if we flood a bit, we can also use excess lands to jumpstart. It is quite possible that a lower land count and a set of Opts also makes sense in this archetype though.

For people who don't want to be fancy, this set is also giving us a good selection of tools to get our beatdown on:

Rhythm of the Wild feels like an incredibly powerful card on the surface. Not only does it hose opposing control decks, but the fact that riot stacks means that even when drawn in multiples Rhythm is not terrible. Between Rhythm and Regisaur Alpha, the Carnage Tyrants we cast will often be coming with haste.

Growth-Chamber Guardian is an especially interesting inclusion in any deck that plays Rhythm. With Rhythm in play Guardian is essentially a 2 mana 3/3 that finds another 2 mana 3/3. The counters are not the only thing useful from Rhythm though - Sunder Shaman is especially powerful when it can smash the turn it comes into play. Not only dealing a large chunk of damage, but also breaking your opponent's favorite toy.

Finally - I must say I am really in love with the split cards in this set.

got not just one, but two really awesome ones:

Modal cards like this are really fantastic in a deck like this what wants to play some removal, but also does not want to be stuck holding removal in hand against decks that lack creatures. These tools do a good job of providing a touch of interaction, while also rarely being a dead draw.

Up next I have something for the planeswalker lover in all of us:

Prior to RNA, I had been shoving Karn, Scion of Urza and Treasure Map into as many different shells as possible - trying to find the one I liked the most. With the printing of Dovin, Grand Arbiter, I think there is a good chance the most awesome shell is simply

. The curve of Dovin, into Karn, into Tezzeret, Artifice Master will provide a steady stream of both threats and card advantage depending on what we need for a given situation.

Having a slew of incidental artifacts like this makes the constructs that Karn pumps out quickly lethal, while also allowing Dovin to ultimate fairly quickly. This archetype also gets to play one of the most generically powerful planeswalkers in this current Standard format in Teferi, Hero of Dominaria.

Next, we have a midrange archetype that got both good mana and great new toys:

We have seen a variety of

, and even Naya Angel decks in a pre-RNA world. Now that

has better mana, and some new toys, I think exploring this direction with the archetype is also reasonable. The Angels decks always had strong aggro matchups due to large Lifelinking creatures, but tended to struggle against Control. By having Black as our secondary color, we gain access to Duress out of the sideboard which can allow us to poke through the control deck's defenses nicely.

Kaya's Wrath plays nicely with not only our Adanto Vanguard, but also our copies of Tithe Taker and Seraph of the Scales that make tokens when they die thanks to the afterlife mechanic. As with the other combinations we have talked about so far - I also love the split card Consecrate // Consume in these colors. The front half replaces itself with a new card in a pinch, while the back half provides a unique answer to threats like Carnage Tyrant.

Finally, we have a deck that caught my eye a bit at the end of this existing format, but felt like it came up just a bit short due to mana consistency. With the printing of Blood Crypt I think this will likely no longer be the case though:

This deck plays out with a number of aggressive starts thanks to playing 12 1 mana Red creatures. It also has a small bit of disruption thanks to our four copies of Kitesail Freebooter. Ruin Raider provides a steady stream of additional cards at a minimal cost, while Dire Fleet Neckbreaker hits hard, quickly.

This deck not only has consistent mana now thanks to Blood Crypt, but also because all of main deck Black cards are pirates that can be cast easily off of Unclaimed Territory. Past this yet another excellent split card finds a good home here:

Carnival provides a small bit of reach, while also clearing out threats like Llanowar Elves and Jadelight Ranger (in response to an explore trigger). While Carnage is a touch expensive on the surface, a removal spell that is not a dead draw against control is fantastic.

I am very excited to dive knee deep into this Standard format. These five decks I've shared here today are just a handful of the deck ideas I plan to start churning through on my twitch stream when the new set goes live on MTG Arena this Thursday. Be sure to drop on by and let me know which decks you think are going to be powerful!