*Editor's Note: This article contains discussion about leaked cards, cards that have not officially been previewed in War of the Spark Preview Season. These cards are not yet proven to be real, so take the following discussion with a grain of salt. If you'd like to avoid content which discusses the leaked cards, then read no further!*

Being a Magic player is often like having Christmas come four times a year. Every new set brings new puzzles to solve - both in terms of fitting new cards into old favorites and exploring entirely new possibilities they open up. Spoilers for War of the Spark are well underway and already the set looks to be brimming with cards that look to be sweet to brew with.

At a high level I would like to say that I love the design space this set has taken so far. I am constantly amazed at the unique ways in which the MTG design team uses the space the game provides to create new things. Planeswalkers with static abilities and ones that only tick down create what almost feels like a new card type. These planeswalkers feel a lot like Artifacts or Enchantments that you can interact with via combat.

While it is still a bit too early to be thinking about the specifics of deck lists with the new set, we can dive into looking at some of my favorites from a high level perspective.

Let's start with my absolute favorite card so far shall we?

Anyone who has followed my content knows I am a total sucker for playing at instant speed. I have a feeling that in the coming months Vivien, Champion of the Wilds and Frilled Mystic are going to quickly become good friends.

Past her static effect, this new Vivien has a high starting loyalty that will let he be deployed safely even against many aggressive boards. Her +1 also helps you apply pressure, while also playing defense with any creature you might have.

One of the things that is especially appealing about this Vivien to me is the fact that she will rarely be awkward in multiples. Because she enters with 4 loyalty and down ticks for -2, we can cleanly deploy Vivien and "use her up" over two turns as two mini Anticipates for creatures.

Her cheap mana cost, the card advantage she generates, and the ability to sequence your threats around counter spells at instant speed will likely make Vivien a staple in Green creature decks for combating control decks.

Then we have the father of all five-mana planeswalkers: 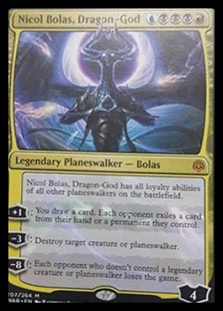 This card follows the fairly typical five-mana walker format of:

The card advantage is not simply drawing a card though - in addition to giving us an extra resource Nicol Bolas, Dragon-God also takes a card away from our opponent. Getting a 2 for 0 on every single uptick is fairly absurd.

Bolas's static ability almost feels more flavorful than functional since his abilities are so much more powerful than most other planeswalkers. That being said I could see him occasionally borrowing something like an enemy Vivien Reid's down tick to remove an enchantment that Grixis otherwise would have a hard time with.

Even with powerful effects - the real trick will be finding a Grixis home that is playable for him. Whether or not this ends up being the case will likely depends on what types of threats end up being good. If Artifacts and Planeswalkers are the tools people are leveraging things look good for Grixis. If Wilderness Reclamation and Experimental Frenzy are the tools to beat, things will likely remain tough for Grixis.

Next up we have a card that is both flexible and a hate card for my most hated card in our current Standard format:

Teferi, Time Raveler's static ability means Wilderness Reclamation is largely unless. While our opponent will still be able to use their untapped lands to activate Azcanta, the Sunken Ruin, they will not be casting Nexus of Fate with their extra mana.

Much like Vivien, Champion of the Wilds I talked about above - the fact that this Teferi will be going right to five loyalty the turn we play him gives him a good chance to survive even against aggressive decks. Against decks that are not playing heavily to the board Teferi's -3 will also be able to act as a method of self preservation.

Lastly - and most obnoxiously - this Teferi's +1 will synergize will with Teferi, Hero of Dominaria's +1 which untaps our lands at the end of turn. Enabling us to spend our extra mana on sorceries.

The last planeswalker I'd like to talk about today is one that most midrange decks are happy to have access to:

This is a fantastic card for midrange decks because it helps you cut in both directions you need to be fighting. Against aggressive decks the life gain Sorin, Vengeful Bloodlord provides will be invaluable. Not only does he uptick personally to gain a life each turn, but going to six loyalty makes him tough to beat in combat.

Against decks that are looking to grind Sorin's -X will return our threats to play for recurring value. I expect Sorin and Seraph of the Scales to dominate the 4-drop slot in most

Planeswalkers aren't the only sweet thing in this set though. The set has War in the title and so far the spells in this set are delivering - we have an entire slew of different sorceries that clear away a good deal of the board in different ways that are fairly interesting:

The thing I love most about these first two sweepers - Single Combat and Time Wipe - is the fact that these are powerful control cards that do not discourage you from playing threats in your control deck. It is far less tedious playing against control decks when they have a plan that actually ends the game before Teferi starts tucking himself in every turn.

Single Combat is especially interesting because as I highlighted above - this set is looking to have a plethora of playable planeswalkers in it. Single Combat will mean players cannot needlessly play out their walkers against the control deck without fear of being punished. Also notable is the fact that Single Combat locks the opponent out of playing new creature or planeswalker cards until your next turn. This means after you tap out for your sweeper, you get breathing room to hold up counter magic before more threats start slamming down.

Time Wipe feels like it could have the most potential in a Bant shell. Returning cards like Frilled Mystic or Hydroid Krasis to our hand before sweeping the board sounds incredibly sweet. Although I also would not be surprised if this card ends up being good alongside Niv-Mizzet, Parun in a Jeskai shell.

Solar Blaze is super interesting to me because the fact that it is not a "full" sweeper means that it is possible to construct our deck so Solar Blaze is more similar to Plague Wind, than Wrath of God. Cards like Boros Challenger and Tocatli Honor Guard jump out as me as playable creatures that we could curve out into Solar Blaze without losing on turn four.

Widespread Brutality is a card that is tough to evaluate. The power level of this card will likely depend on how many of the various Amass cards end up being Constructed playable, but the design here is interesting so I felt it was worth mentioning. The floor on this card is create a 2/2, deal 2 damage to everything in play. The ceiling is making a large creature you have bigger, while clearing away the rest of the board.

Up next we have a unique design to Magic that I could almost include above, but felt like it was worth highlighting on its own:

I think the textbox of Massacre Girl would likely be potent as a sweeper effect on its own and stapling it to a 4/4 body with Menace just makes it that much more appealing. In a format with Llanowar Elves, various explore creatures that frequently have 1 toughness, and Afterlife cards I think this Massacre Girl will at the very least see some sideboard play. It is worth noting that the last case of Afterlife makes Massacre Girl especially deadly as she will clean up opposing Afterlife tokens right away and trigger further. This makes creatures that are generally thought of as resilient much worse in the face of a massacre.

What we have seen coming out of War of the Spark so far really makes me excited not only for the set release, but also the future of Magic as a whole. The design team has really shown just how many different directions they still have to push the design space of the game to keep things fresh and interesting.

I am looking forward to soaking up all the other awesome things that are waiting to be spoiled form this set. I am sure many more great ones will be shared with the world between when I finish writing this piece and when it is published for you to read!

What are your favorite War cards so far? Which are you most looking forward to playing with?