I'm sure you've read a ton of articles already about the facts of Masters 25. It's a good set, although it has left some people wanting more. I don't want to talk about all of the cards and the EV of the set. What I do want is to take some time to make a distinction about types of reprints and how they affect the card price going forward. 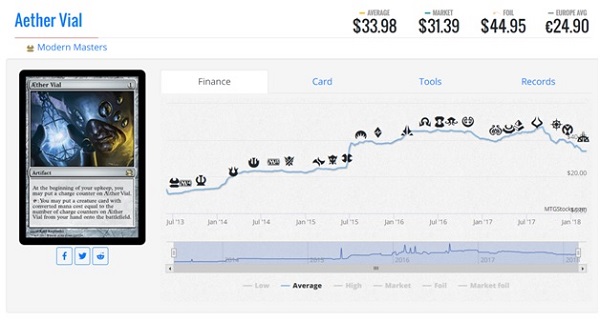 This is the entire life cycle of Aether Vial's price since it got reprinted in Modern Masters in 2013. I think it's pretty safe to say, without another reprint or a big meta shift, Aether Vial is poised to return to its previous peak price. Tournament staples that are in high demand are the types of cards that are likely to quickly and easily recover and be added to another Masters set.

Let's take a look at something that didn't and probably never will. 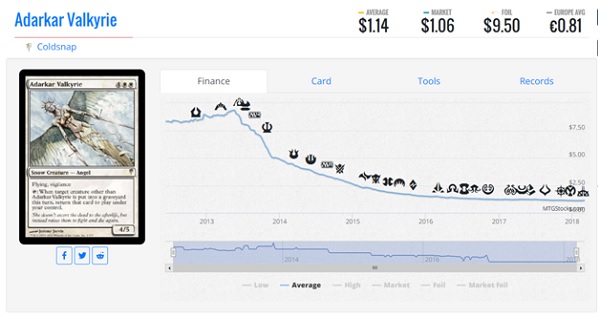 Adarkar Valkyrie was previously a rare only printed in Coldsnap, a notoriously unpopular and underopened set. Casual cards from that set continue to be expensive because rarity is the biggest bottle neck on their prices rather than demand. Adarkar Valkyrie was a $9 card that fell to $1 and just sat there. I don't expect it to ever get reprinted again and it doesn't need it. There is far more supply now than there is demand.

The biggest complaint I see with Masters 25 is that there isn't "enough value", and while that isn't inherently false, it's very misleading. The set has good expected value over the course of many boxes. There is a high variance in this set, like most Masters sets, but that shouldn't be unexpected. What is a problem is how many of the high value cards are not the types of things that will rebound well. Basically what I'm saying is that these pre-order prices are likely to quickly fall as the demand for the cards at those prices just doesn't exist. 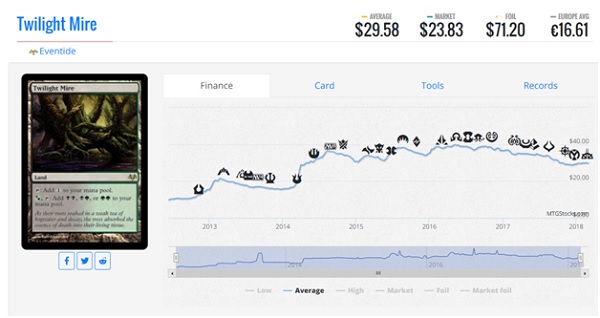 Let's look at Twilight Mire. It's preordering for sub $20 and was already on the decline as the only deck in Modern that plays it wasn't very popular (Jund). Even with the recent increase in popularity of Jund, it only plays 1 copy, at most, so the demand is super shallow. Where does this card end up in a month? I find it hard to imagine that Masters 25 copies will be more than $10 at this rate. Look how hard Grove of the Burnwillows got hit and that even sees play as a 4 of in the decks that play it. 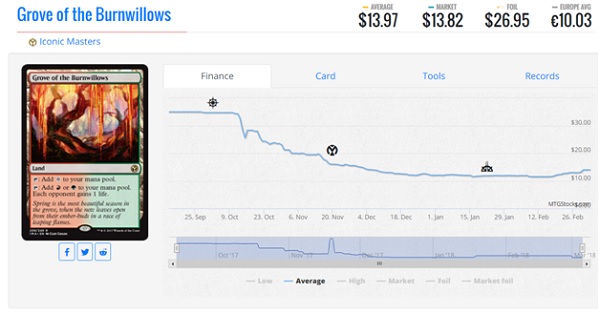 Grove started preorders at $35 and fell to $17 before it was even released! Now you can find copies for $14, less than half the pre-order price. Demand might tick up a little if people decide to play the

Eldrazi deck because it is pretty budget friendly for a Modern deck outside of Chalice of the Void. Coincidentally, that is getting reprinted and is a major reason why people may move into the deck.

Chalice of the Void is what I'm going to call a "builder" card. It's the kind of card that gets people excited to build decks and drives the demand on other cards. Dark Confidant, Tarmogoyf, and Aether Vial are also builder cards that drive demand to their supporting cast. Enemy color fetchlands, Liliana of the Veil, Cavern of Souls, and Snapcaster Mage are all builder cards that help the set retain value in the long run because the demand for the cards is so high. Modern Masters 2017 did a good job of seeding the set with a lot of builder cards to keep the value of the set from plummeting while also making sure that there are exciting cards to open and prices stabilize or drop briefly. The expensive cards in Masters 25 are not builder cards for the most part. The cycle of filterlands is not nearly as in demand as enemy fetches to start. The second most expensive card in the set (currently) is Imperial Recruiter which is also not a card that you're going to build a deck with because the decks that used to play him in Legacy are not very good anymore. After the Sensei's Divining Top ban, the decks most bottlenecked by Imperial Recruiters disappeared. Jace, Rishadan Port, and Chalice are 3 of the most expensive cards in the set and are builders, but the rest of the most expensive cards leave much to be desired. Azusa isn't a card you were waiting for a reprint to build your fringe Amulet of Vigor deck. Animar is a strictly EDH card that was only expensive because it was only in the first Commander set. How many more cards are around $10? Summoner's Pact, Thalia, Guardian of Thraben, Pact of Negation, Phyrexian Obliterator, Blood Moon, Vendilion Clique, and Ensnaring Bridge are the remainders. Some of these are very important to the decks that play them but aren't the key card to making the deck and unlikely to hold their value. Thalia, for instance, is not the gatekeeper for a player trying to get into Death and Taxes in Legacy. It's Rishadan Port that is also in the set. Since the players that needed port might have already bought Thalia, it's unlikely that her price will stay the same or rise.

The commons and uncommons in this set are a bit better. Cursecatcher unfortunately is going to have the ground fall out from beneath it because, although it's expensive, it's not a card that is keeping people from building Merfolk. That's still Aether Vial. Street Wraith, Simian Spirit Guide, Utopia Sprawl, Ash Barrens, Lightning Bolt, Ancient Stirrings, Boros Charm, Regrowth, Relentless Rats, Swords to Plowshares, Rancor, Cultivate, Nettle Sentinel, Myriad Landscape, Unearth, and Swiftfoot Boots are all upwards of $1 or more and almost all of them are in high demand. This is a lot better than the extreme opposite that we saw in Modern Masters 2015 where the uncommon slot was pretty unimpressive at release outside of Remand. My gut says a lot of these cards are pretty important in multiples and although they are cheaper now, you may not want to wait too long to get your copies as they could start climbing after release weekend.

To sum it all up, most of the cards in this set I think have a lot more room to fall. Iconic Masters had enough of these that I'm hesitant to buy anything except the most important cards to build your decks. I don't think that makes this set bad, but I think it will make it more attractive to wait for reprints to drop more.