If you told me 15 years ago that not only would we be returning to Kamigawa once again, but that people were extremely excited about it, I may have laughed at you. The original Kamigawa was conceptually cool but fell somewhat flat, perhaps partly due to being sandwiched between the insane power of Mirrodin Block and the groundbreaking concept of Ravnica block.

But when it comes to the 2020s it's all about expecting the unexpected, so here we are!

We now return to Kamigawa 1200 years after our first visit, to find an almost science fiction-esque cyberpunk world that is very different from anything Magic has done before. Rather than the spirit world at war with the mortal world like in the original Kamigawa, here instead we have a clash between technology and tradition, with many thematic links and callbacks to the old world we are familiar with.

At the time of writing this a little over 200 of the 302 cards in the set are spoiled, which means it's time for first impressions in the form of my love/hates! Note that these are not just static rankings. The point is to shed light on cards I think are being over or undervalued based on first impressions. The point of my Love/Hate article is not just to call cards good or bad, but to view cards based on the first impressions people have been having or are likely to have. The goal is to dispel undue hype or to draw attention to cards that are being overlooked.

We finally find out the identity of The Wanderer! Well, sort of at least. The Wanderer is the emperor of Kamigawa, although unlike other planeswalkers she can't control her planeswalking. Instead, she is like Sam from Quantum Leap, constantly jumping from one plane to the next.

But whatever her story is, her card is good!

The Wandering Emperor is a four-mana planeswalker, which is already a good start, and is the first planeswalker to ever have flash. Furthermore, if you cast her on your opponent's turn you get to use one of her loyalty abilities once, making her play more like a spell that leaves a planeswalker behind.

As far as her abilities go, she can be everything from a combat trick, to a stream of 2/2 tokens, to a removal spell that also gains life in a pinch. As such, she reminds me a lot of Gideon Jura, a planeswalker that is both a good control card as well as a win condition. Untapping with a safe planeswalker in play is a control or midrange player's dream, and being able to cast her on your opponent's turn makes that very easy.

The Wandering Emperor may not be as flashy (pun intended) as some other planeswalkers, but she is likely one of the best cards in the set.

Ninjas and ninjutsu return! However, while ninjutsu is a super cool and flavorful ability, it never saw much play in Constructed. The requirements of needing an unblocked creature, as well as the tempo risk of bouncing your own creature only to have your ninja killed, are both major red flags.

As such, Nashi, Moon Sage's Scion has a much brighter future as a fun casual card than a serious Constructed card.

The ability is powerful, as card advantage combined with free spells is a great prize, but it is going to be quite the task to trigger. Then if you finally do trigger the ability, there's also a fail-state of just hitting lands or a spell you're not super interested in casting at the time, and now you have a non-evasive 3/2 in play and need to figure out how to hit with it again.

In order for a ninja to be desirable in Constructed, it's going to need to be very cheap to help mitigate the risks involved. 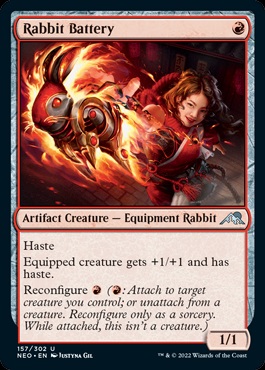 Not every card needs to be a flashy Mythic or Dragon, and however unassuming Rabbit Battery looks it is a very real Magic card.

Reconfigure is a new mechanic in Kamigawa: Neon Dynasty, which is a new take on equipment. The big problem equipment has always had is that it's difficult to find the right mix of creatures, equipment, and other non-creature spells unless the equipment in question is extremely powerful. Otherwise, you run the risk of the equipment just sitting in play and not having anything to do. These reconfigure equipment solve that problem by starting out as creatures, but can be equipped to your other creatures to help augment them.

As a creature, Rabbit Battery is a serviceable but unexciting artifact version of Raging Goblin. While the additional artifact synergies are nice, nobody is putting Raging Goblin in their Constructed decks. However, Rabbit Battery is also an even better Boots of Speed, which is a card that is surprisingly close to Constructed playability because of how good haste is as a keyword ability.

Neither of these cards would be playable on their own, but when you put it together into an extremely mana efficient package you've got a very pleasant little surprise. Rabbit Battery is a card that is going to play extremely well.

These cheap attacking enchantments always look so tempting! However, they often also fall flat for a number of reasons.

Tempered in Solitude is a lot like Military Intelligence - it's a two-mana enchantment that can draw cards in your aggressive deck, what's not to like? But while Tempered in Solitude has a somewhat easier condition to meet (in exchange for a slightly worse trigger), it still falls victim to the same pitfalls of similar cards that came before it.

The first is that it doesn't actually do anything unless you are successfully attacking your opponent. This means that if you are behind, in some sort of trouble, or don't have any good attacks, it gives you actual nothing. This makes it somewhat of a win more card, although you can't be winning too much as your other attackers need to stay home if you actually want to draw.

The second is that you just aren't getting a good rate for the card draw until many successful turns have passed. When you put it all together and draw your first card off of Tempered in Solitude, you've now spent two mana on your main phase to cycle a card. This is bad. When you get that elusive second trigger, you're now operating at a decent if unexciting rate spread out over two turns - think Chart a Course. If you get to draw a third card off it you are now in a territory that starts to look good, but it has taken you three turns of successful attacks to get there - how much more help do you need to win this game anyway?

Tempered in Solitude could have a place as a sideboard card against control decks when you expect the game to go long and want to play around mass removal, but is a miss on almost all other fronts.

I will be honest, I'm not completely sure on this one.

There are many of these Saga Enchantments that flip into a creature for chapter three in Kamigawa: Neon Dynasty and frankly they are going to be tough to evaluate as we've never really seen anything like them. The closest approximation I can come up with is a mixture of normal Sagas and Suspend cards from Time Spiral.

Not getting the creature right away makes it hard to parse the immediate impact these cards will have; and, to top it off, Tribute To Horobi // Echo of Death's Wail actually gives your opponent's resources for two turns! If your opponent is able to utilize these tokens for value (Deadly Dispute comes to mind) or you're trying to aggressively attack, this is a pretty big turn off. However, when it works, Tribute To Horobi is actually just an insane rate. Two mana for five power and toughness across three bodies, one of which has evasion and potential card draw is an amazing amount of material for a very low cost.

This is not a card you can just put into your deck without thought as to what you want to do with it. It is also a card that may end up a casualty of the format if your opponent is able to use the tokens well. But what I see is a card that has a very good rate and is ripe with potential.

I want to be very clear here that the point of a "hate" in this article is not always to say a card is bad, but also to temper expectations when people are coming in way too hot on a card.

Boseiju, Who Endures is going to see a decent amount of play. That being said, the majority of the time it is going to be relevant is when it is played specifically alongside Life from the Loam, Expedition Map, or Simic Growth Chamber. In these eternal formats that have great ways to search out and recur lands as well as specific needs (like destroying Blood Moon or other hate cards), Boseiju is going to be a very important card.

However, this is a specialized tool, not an all-purpose Swiss army knife. As we've seen from Assassin's Trophy, giving your opponent an untapped land is a monumentally large drawback. Boseiju is a "break in case of emergency" kind of card, not a Vindicate kind of card. As long as you understand that you should be mostly on the mark as to what to do with it.

I do want to point out that I think this cycle of legendary lands is absolutely bonkers, with the others in the cycle all providing extremely useful abilities for reasonable mana costs and almost zero opportunity cost for the first copy. They are going to be played in all formats until the end of time, and Boseiju is perhaps the worst one in a vacuum but one of the best for specialized purposes.

Standard has been in a somewhat weird spot as of late, as between the lack of paper play, the introduction of Alchemy as a format, and the shadow of cards like Alrund's Epiphany looming over the format for far too long, the format has fallen by the wayside.

However, with Kamigawa on the horizon to provide new life as well as the overdue bannings of Alrund's Epiphany, Divide By Zero, and Faceless Haven, I'm very excited to brew once again!

As always, I'll be jumping right into the fray on day one with ten new decks packed full of brand-new cards from the new set next Thursday on my stream and on my YouTube! Next Friday's article right here on CoolStuffInc.com will have all ten of those decklists, as well as my thoughts on each deck and the new direction of the format. This time around I'm going to do eight Standard decks, with one Historic deck and one Alchemy deck for good measure.

I'll see you there!