For the first few weeks of Theros Beyond Death Standard, Azorius Control won everything:

1st Place at SCG Tour Team Open in Richmond in the hands of Corey Baumeister.

1st Place at SCG Tour Standard Classic in Richmond in the hands of Zach Allen.

1st Place at SCG Tour Team Open in Philadelphia in the hands of Zach Allen.

1st Place at the 2020 Magic World Championship in the hands of Paulo Vitor Damo de Rosa.

That's just an unbelievable run in the first few weeks of a season.

While Azorius Control already had great tools in Teferi, Time Raveler, Narset, Parter of Veils, Absorb, and more, Theros Beyond Death gave it a bunch of new cards that turned the dial up to eleven. Shatter the Sky gave the deck a true 4 mana Wrath of God; Dream Trawler is one of the best control win conditions printed in a very long time; And most importantly, Elspeth Conquers Death may just be the best card in the entire set. Add this much power to an already established deck and it's not hard to see why it has seen so much success. 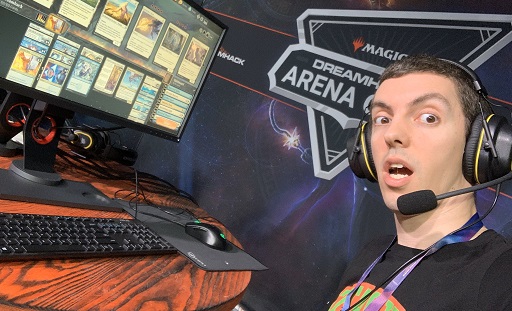 So why is it that when I played Azorius Control at the $100,000 MTGA Dreamhack Open last weekend it felt like my deck was already two months out of date?

Reason One: The Rise Of Temur Adventures

While I was able to squeak out a Top 16 finish for a cool $1,400, one of the answers to my question was right at the top of the standings:

Aaron Gertler made a bold and excellent metagame choice that gave him an extreme amount of deck advantage in a field jam packed full of Azorius Control decks. While other players were just trying to tech their Azorius Control decks to beat each other with maindeck copies of Dovin's Veto and Mystical Dispute, Aaron sidestepped the issue with an engine that is phenomenally effective against Azorius Control's plan.

Edgewall Innkeeper and Lucky Clover are the two cards that make Temur Adventures tick and both are very difficult for Azorius Control to deal with. Both cards come down early enough to slip under countermagic, are easy to replay if they are bounced by Teferi, Time Raveler, and most importantly can't be touched by Elspeth Conquers Death.

Each card sits on the battlefield and lets the Temur Adventures player accrue huge amounts of card advantage over the course of a long game, a style of game that Azorius Control can't avoid. Trying to play a typical control game against that type of card advantage is extremely difficult, leaving Azorius Control in the unenviable position of just trying to stick an early Dream Trawler and ride it to victory. With the Azorius Control decks looking to shore up the mirror Dream Trawler counts are down, making it a very difficult matchup.

It was no secret that Azorius Control was the top dog going into this weekend and the players were more than ready. Maindeck copies of Mystical Dispute and Dovin's Veto were commonplace, pushing players to weaken their other matchups at the expensive of gaining an edge in the mirror. Some players were also up to a full four copies of Castle Ardenvale. But that wasn't all.

Players were looking for a number of other ways to break the mirror, some of which were downright terrifying. I played against two such decks in the event.

One was essentially Azorius Control splashing Black, with maindeck copies of Thought Erasure and Oath of Kaya alongside the usual Azorius suspects, but something far more terrifying in the board.

Thought Distortion?! Are you kidding me?

If you are able to handle Dream Trawler and Archon of Sun's Grace, Thought Distortion is an unstoppable knockout blow against Azorius Control. If they don't already have planeswalkers or a creature threat in play, it is almost impossible to come back from a Thought Distortion.

I also played against a Bant deck that was basically just Azorius Control splashing Green for Growth Spiral and Uro, Titan of Nature's Wrath, which gave them an important mana advantage in Game 1. However, the real surprising was in the sideboard.

While I was able to win this match, it was exceedingly difficult. All of this was in addition to maindeck copies of Dovin's Veto and Mystical Dispute. While there are answers to Shifting Ceratops, like Elspeth Conquers Death and Shatter the Sky, forcing your opponents to have the right answers at the right time makes life very hard.

I also lost a mirror where my opponent sideboarded in two copies of Stonecoil Serpent, which was surprisingly difficult to answer. I couldn't bounce it with Teferi, kill it with Elsepth Conquers Death, or attack through it with Dream Trawler.

The issue with all of this is that the Azorius Control decks are cannibalizing each other. Every maindeck Mystical Dispute and every crazy sideboard plan lowers the overall power level of the deck against the field, and as the other decks get more refined this is a recipe for disaster.

The last reason is that the format is still growing and adapting, with one of the most interesting and exciting innovations coming from popular streamer Crokeyz. He has been crushing high Mythic for the last week with his Azorius Control inspired Bant Control deck, grafting all of the best parts of Azorius Control with a Growth Spiral/Nissa, Who Shakes the World/Hydroid Krasis shell.

I played this deck myself to Mythic yesterday it is very good. Being able to utilize two of the best engines in Standard in the same deck is fantastic, allowing the deck to hit from all angles. You disrupt, make land drops, draw cards, and present a murderous row of the best threats in the format.

Theros Beyond Death is still a very new set and figuring out how to use the best cards in it in the best ways is not an easy task. With new evolutions like this Bant deck, the first drafts start to look much less appealing. It's not so much that Azorius Control isn't a good deck, but it's getting worse as it gets inbred trying to beat itself while the other decks are getting much better.

Azorius Control isn't completely dead or outdated yet, but taking a long hard look at both the metagame and your specific decklist before you enter an event or the ladder would be a wise thing to do. Just playing the best cards isn't going to be enough as the format evolves, and being public enemy number one has its disadvantages.

It's lonely at the top. That is, of course, until somebody takes your place.