The world is a crazy place right now.

With social distancing in place, people out of work, and a general state of quarantine around the world in place, playing paper Magic has become quite difficult! Magic is built around large gatherings of people, with big tournaments and conventions being the norm for over two decades. However, "the Gathering" part has taken a huge hit in the wake of COVID-19. Large events are canceled, local games stores are closed, and even getting together eight players for a draft or night of Commander is almost impossible.

Playing Magic Online or MTG Arena are both reasonable alternatives, as well as some sort of webcam conference call contraptions, but the reality is we're often stuck with a very limited amount of people to play against.

Today I'm going to show you three fun ways to play Cube with only two players! And don't worry if you don't have a Cube already built! While I'll be using my Cube as an example for this today, any Cube or collection of Magic cards can be used. Cube doesn't necessarily have to mean piles of dual lands, mythics, and expensive cards! It can merely be a collection of cards that is collated to played with. Commons, draft left overs, junk rares... the reality is that a "Cube" can be whatever you want it to be. So dig through those card boxes and put something together and let's go!

Perhaps the most well known two player draft format, Winston Draft is a great and simple way to play limited with only two players.

You'll need a random assortment of 90 cards from your Cube. Winston Draft was initially intended to be played with six booster packs, but it works even better with a Cube. Don't feel bad about changing this number, depending on what type of Cube you have built; larger numbers work better if your Cube has a lot of synergy cards or non-basic lands, and I often prefer to do 120 with my Cube.

You have the one main stack of cards on the far left, and three one card piles that you will be drafting from. The starting player looks at the first pile and has the choice to either take the pile or move on to the next pile. If they take the card, a new card is placed in that slot and the other player takes their turn. If they want to pass to the next pile, one new card is added to the previous pile. This process is repeated for all three piles, but if they pass on the third pile they then get a random card from the top of the stack and it is the other player's turn.

As this drafting process proceeds, you will end up with weak piles getting larger and larger and big questions about wanting quality or quantity. Like a normal draft, you will start to read the signals from your opponent about what colors they are in, so you can work your own draft around that information. You only end up seeing a small part of the cards that end up in your opponent's deck, making this a fairly simple format that is focused on risk vs. reward. Decks will usually be a little weaker than normal draft decks, but it's still very fun.

Maybe you're looking for a little less hidden information?

My favorite way to draft my Cube with two players, Grid Draft ends up being much more interesting because you get to see every card taken. With this information about your opponent's deck and their current card pool, you are not only drafting to build your deck, but also to try and beat your opponent's deck. There are nice levels of deception and counterplay that make for a very interactive draft experience. You also both get to see all the choices, so there's less time sitting and waiting around as you can be thinking about your pick during your opponent's turn.

Like Winston Draft, you will need to set aside a large pool of cards to make each grid from. 162 cards (good for 18 rounds ) is pretty standard, but again learning towards more cards makes each player's deck better and usually makes for a more fun experience. This will vary for each different type of Cube so don't be afraid to experiment.

To start the draft, lay out nice cards in a grid pattern like below. The starting player has the choice of choosing any row or column and taking every card in that selected row or column. The other player then selects their own row or column. The remaining cards are discarded and you move to the next pack, where the player who chose first the first pack now chooses second. Repeat this for as many times as cards you select, but make sure that you have an even number of packs so each player gets to choose first an even amount of times. 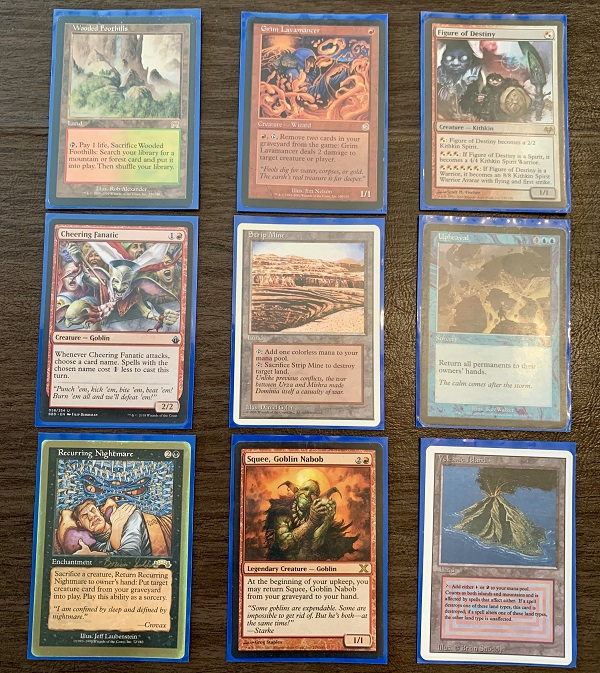 For example, in this pick two of the best cards are Strip Mine and Upheaval, but they don't go very well together. However, the top row is the start of a very nice Mono-Red Aggro deck, and the bottom row pairs Recurring Nightmare and Squee, Goblin Nabob for a great start to a possible Survival of the Fittest deck. Or maybe you just want to pair the Upheaval with the Volcanic Island?

Example picks from this pack would be player one taking the top row...

...which is only two cards because the top row is now gone.

All the remaining cards are discarded and we move on to the next pack with player two picking first. Then build your decks and play!

With so much information out in the open there are many levels of strategy in a Grid Draft. Do you try and draft a deck that counters your opponent's deck, or just draft your own good deck? Do you take a red herring early pick to try and throw your opponent off and then draft a different deck? How often should you be hate-drafting?

We like to do our Grid Drafts totally face up, so both players drafted cards are face up public information, to make it less about memorization, but that's also up to you.

But maybe you want to do some that's a bit different than your normal Magic experience?

One of the coolest things about Magic is how many different ways to play it there is, and Pai Gow Magic is certainly something completely different. Often played with booster packs, Pai Gow is also a blast with 15 card "packs" from a Cube.

To start, each player gets 15 random cards privately. They then move into a deck building phase, where they must build five different three card decks out of the 15 cards. You then play five individual games with each of these three card decks chosen at random with the following rules:

Pai Gow Magic is a blast when played with normal booster packs, but even more fun with a curated selection of cards like a Cube. You often end up with fast and crazy games that involve turn-one kills, unlikely scenarios, and bizarre game states. The games are often over quickly, but half the fun is deckbuilding so you just get to build again!

Finding the right mix of decks out of your 15 cards can be very challenging. You want to spread out your power level and will certainly have duds you need try and make due with. Do you throw all of your duds into one deck and just give up a loss to have a better four other decks?

An example of a deckbuilding pool and five built decks: 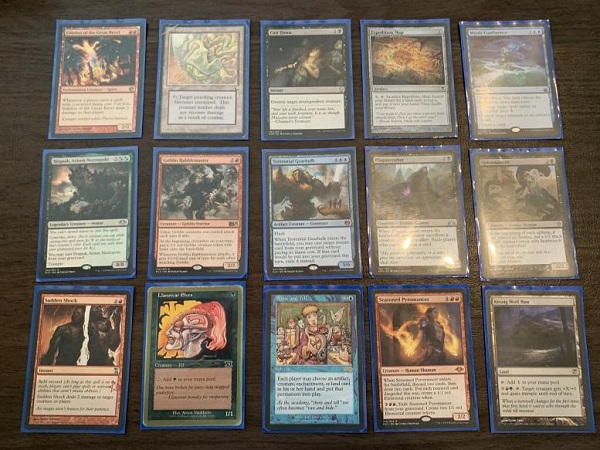 We've got a few stinkers, but this is a relatively powerful pool here:

Your classic Pai Gow turn one kill. Haste creature, Kessig Wolf Run, and infinite mana is easy game, and if they have a removal spell we have a Llanowar Elves to swing for lethal the following turn.

Mystic Confluence doesn't do much in Pai Gow, but it is a big bounce spell that can buy you time to win with Hogaak in one swing. Pairing the bounce with Eidolon of the Great Revel is also hilarious, even on the draw.

Put the removal spells with the flash five-power creature, sounds like a good plan. A deck of a hard counterspell and Torrential Gearhulk is probably unbeatable, but this will have to do. This deck seems equally great on the play or the draw.

Ophiomancer plus Plaguecrafter is cute, and if you can hold your opponent off with Maze of Ith you have an infinite number of 1/1 deathtouch attackers.

It's not hard to see how fun deckbuilding can be!

You may need to tune your Cube a little bit to remove the completely dead cards like Stomping Ground and Izzet Signet, but Pai Gow Magic is a blast with almost endless replayability.

We've only scratched the surface of what fun games you can come up with, even if you only have a random assortment of cards. Playing Commander or Modern is fun, but don't be afraid to experiment with all those cards in your closet collecting dust!

What are your favorite alternate ways to play Magic?