As we head back to Innistrad for the third time, excitement is high. Aside from being a return to a beloved plane full of horror tropes and awesome transform cards, fall rotation is always one of the most exciting times on the Magic calendar. This is further magnified by the general disdain the player base has toward all of the banned and pushed cards from Throne of Eldraine and Ikoria - we've been waiting for this rotation for a long time and it's finally here!

This is doubly exciting because of how Zendikar Rising, Strixhaven, and Adventures in the Forgotten Realms were all "powered down" compared to Throne of Eldraine, which means two things. One, we've got a good chance at a well-balanced and fun Standard format, and two we'll finally get to play with these cards now that they aren't being stifled by Bonecrusher Giant, Yorion, and Lovestruck Beast!

Werewolves return! And some of them are Blue? Hmm.

Suspicious Stowaway // Seafaring Werewolf is an odd-looking card, as not only is a Blue werewolf a bit strange but it also flips into a Green werewolf that could probably just be Blue based on its abilities. Trust me when I say don't let this distract you!

Looter il-Kor saw play in both Standard and Block Constructed when it was legal there, as well as being a very solid Cube card for any deck looking to get cards into the graveyard at a good rate. Suspicious Stowaway is just a Looter il-Kor that's all upside. It can block, which will matter a fair amount of the time, but it also flips into the far more impressive Seafaring Werewolf which becomes an actual card draw engine.

What makes Suspicious Stowaway so impressive, however, is how much better it is going to play than your typical werewolf. Normally, taking a turn off from playing spells on your turn is a huge tempo loss that makes accessing the backside of werewolves a big cost. However, Suspicious Stowaway plays so well with countermagic and interaction that you'd love to just say go on turn three and flip it while dealing with what your opponent does on their turn.

One of the most exciting parts of Magic is getting to see how context effects various cards. Cards like Deathrite Shaman and Faithless Looting were fringe players during their time in Standard, while being outright banned in a large portion of the older competitive formats.

Delver of Secrets // Insectile Abberation has been one of the most dominant threats in Legacy for a very long time and was also the namesake of a good Standard deck during its time there as well. The thing is, both those formats had Ponder in them. Delver of Secrets has been legal in Modern forever, but without something on the level of Ponder or Brainstorm it's never made much of an impact.

There's little chance that we're ever seeing anything on the level of Ponder again in Standard, and beyond that Delver of Secrets also requires a density of cheap and efficient instants and sorceries as well as some good countermagic; it's also pretty unlikely we're getting Mana Leak either.

Don't be fooled by pedigree without looking at context too!

Look, if you know me, you know I can't get away from a good, honest Inspiration.

Glimmer of Genius, Chemister's Insight, Behold the Multiverse... even actual Inspiration back in the day. I love a good draw-go control deck and I don't need a card as powerful as Fact or Fiction or Sphinx's Revelation to make me want to play one. These four mana draw-twos aren't always there on raw rate, but they play very well with counterspells and make draw-go decks possible.

While slightly harder to cast, the front side is already better than Glimmer of Genius straight up, letting you see more cards to find that key sweeper or counterspell you need. This effect has been seen over and over again and it's a great one. However, the real power is in the secret third card you draw, which is a seven-mana Dig Through Time for later. This is quite the bonus tacked onto an already solid spell, giving you the late game inevitably that control decks crave.

If there's a Blue control deck in Standard, this card will be the cornerstone and it's definitely got enough legs to make it into older formats as well.

Fiend Hunter effects have been a dime a dozen in the last few years, usually providing unreliable removal on a flimsy body that would be passable in decks that made good use of the creature but almost always underwhelming. The risk of getting blown out and giving your opponent back their creature at an inopportune time was always just too much.

Skyclave Apparition brought a new level of flexibility to the effect, while also only giving your opponent back a part of their card rather than the whole thing. There's no doubt that Skyclave Apparition is one of the best White cards printed in a while and is now a multi-format staple.

Brutal Cathar // Moonrage Brute isn't going to be legal in Standard without Skyclave Apparition for quite some time, which is a huge count against it. It has some upside (albeit risky) in combat on the backside and will be obviously be good against decks that are unable to kill it, but on average Brutal Cathar will be much more in the Banisher Priest class of card than the Skyclave Apparition one.

Thing in the Ice // Awoken Horror is a classic Innistrad card that has seen play across multiple formats and is the immediate easy comparison to Smoldering Egg // Ashmouth Dragon. Frankly? It feels pretty accurate, aside from the distinction that Smoldering Egg feels much better suited for Standard play while Thing in the Ice is better for older formats.

Smoldering Egg has a unique trigger that cares about the mana spent on the instant or sorcery rather than just being a normal trigger or caring about mana value. This means it's harder to cheat with things like delve or other cost reducers, but better when played with slightly more expensive spells. This works perfectly for Standard, especially with the threshold being seven counters, as it can curve to flip perfectly on turn four into Ashmouth Dragon by doing no more than casting a three mana spell on turn three and a four mana spell on turn four.

Once flipped, Ashmouth Dragon is an absolute house, providing very respectable stats alongside a bonkers ability that can dominate the board or just kill your opponent very quickly.

Smoldering Egg is going to be a huge player.

Again, I want to reiterate that the point of my Love/Hate article is not just to call cards good or bad, but to view cards based on the first impressions people have been having or are likely to have. The goal is to dispel undue hype or to draw attention to cards that are being overlooked.

Infernal Grasp and Fateful Absence are very similar. They are both extremely efficient, two mana, instant speed removal spells with no targeting restrictions. They can kill creatures with counters on them, dragons and angels, Black creatures, legendary creatures, etc with impunity. However, they also do so at a resource loss for yourself.

Infernal Grasp asks two life of you, which is 10% of your starting life total. It may not sound like much, especially to those who are used to shocking in Overgrown Tomb and casting Thoughtseize, but a removal spell is often designed to keep you alive. People are viewing this as a control card, but the reality is that if you are trying to stabilize the game this is a very risky card to have in your deck in multiples; Slow decks don't play Dismember for a reason.

The same is true with Fateful Absence, but for different reasons. Fateful Absence does a good job at keeping you alive, but at the cost of resources. As long as your opponent has time to crack their clue token, Fateful Absence is a 2 for 1 in your opponent's favor. This is fine if you plan on ending the game before that clue or card can matter, but if you're a slow deck looking to grind out an advantage, that's a pretty big cost.

Both of these cards are very playable, even excellent in proactive and aggressive decks, but they are not just "set it and forget it" removal spells. The design here is excellent, as good Doom Blade effects tend to lead to reactive control or midrange decks being too good. Instead, these two cards naturally make themselves worse in those decks while still being very solid. 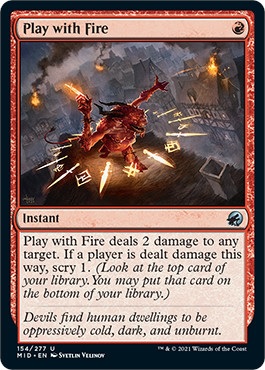 Speaking of excellent design, I love the new Shock variant Play with Fire for a number of reasons.

First off is that Shock is actually a pretty good Standard card. We've been spoiled with Bonecrusher Giant for the last two years, but if you need to kill a creature on the cheap Shock is a great way to do that. However, the weakness of Shock was always how poorly it would line up against opponents who didn't have small creatures to kill. Going to the face with Shock feels a lot worse than Lightning Bolt, so adding a small amount of value on that end is a nice compromise.

I expect Play with Fire to see a ton of play in new Standard, especially as people realize the hole that the rotation of Stomp will leave.

I have to say that I'm very excited for the post-rotation Standard format.

I've always been a huge fan of Standard, which has made the last year or so rough as it's just been in an awful place. However, the design of Innistrad: Midnight Hunt is looking great, as has the design for the last few sets. The crazy outlier power creep of Throne of Eldraine and Ikoria has been throttled back and I think we're finally hitting the point where we can start to reap the rewards.