Everyone loves weddings! Fun, dancing, open bar, the celebration of the union of friends and family... what's not to love? Well, I guess assuming the bride and groom aren't bloodsucking vampires hellbent on destroying the entire world by merging the power of their two bloodlines... which does happen sometimes!

Innistrad: Crimson Vow is almost here, following the story and mechanics laid out in Innistrad: Midnight Hunt and giving us another glimpse into the ever-popular world of Innistrad. While the last set focused on werewolves and the struggle between day and night, this new set is pure Twilight, with vampires popping out of every corner.

Despite the power level of Alrund's Epiphany, Standard is actually pretty interesting right now for such a small format. There are certainly the main Izzet/Green/White decks, but there's enough outliers and question marks as well as interesting gameplay, to make it all worthwhile. Now we get an entire new set and watch things really flesh out, as not only is there plenty of good counterplay to Alrund's Epiphany in the set but as the format gets more powerful as a whole the seven-mana sorcery will get worse.

Let's start with a simple trio of removal reprints that have all been major players in Standard during their times of being legal.

Hero's Downfall is perhaps the most notorious of the three, seeing four-of play in Mono-Black Devotion when it was a force in Standard back in the day and providing a universal answer to pretty much every threat in the format for only three mana at instant speed. We've seen a similar effect in recent memory in Murderous Rider, albeit with both upside and downsides. While the rate on Hero's Downfall isn't as impressive as it was back in 2015, it's still a solid card that is going to see some play, but is perhaps the least exciting of the three.

Abrade is the most commonly seen of the three, seeing play in small numbers in almost every Constructed format, while being a major player in Standard when it was legal. Just like before when it was killing Smuggler's Copter and Heart of Kiran, it has a major vehicle in Esika's Chariot to kill in Standard too. There aren't nearly as many artifacts in Standard as there was during Abrade's last run, but it's still a very welcome addition.

However, the most exciting of the three is perhaps the least well known in Valorous Stance. Valorous Stance is a solid card that saw some play during it's time in Standard, but is contextually perfect for this current format. Many of the heavy spell-based decks only run one or two creatures, but the ones they do run - Lier, Disciple of the Drowned, Smoldering Egg // Ashmouth Dragon, and Goldspan Dragon - absolutely must be answered as soon as possible. However, it feels awful to have something like Fateful Absence or Blizzard Brawl in your deck against them because of how often it will just rot in your hand. Valorous Stance has a very reasonable second protection mode, giving it an extreme amount of flexibility while also answering very specific problems.

Hero's Downfall and Abrade will be players, but Valorous Stance is going to be a major piece to this format.

Talk about a Banisher Priest overload!

Savior of Ollenbock is a cool, high ceiling card with a ton of text on it, but it is also a card that needs a lot to go right in order to work. In a lot of ways, it reminds me of something like Warren Instigator, which ended up needing too much help to make an impact.

And if you jump through all of these hoops you get to exile your opponent's creatures, or even cooler exile a creature from a graveyard to potentially get back later. These payoffs are great, but the juice isn't worth the squeeze in Constructed. In Limited however this is quite the bomb!

I love Village Rites, but Standard (and modern-day Magic in general) is so much about adding to the board that it can be difficult to cast a spell that only draws cards, especially if it does so by subtracting from your board.

There's already a pretty great Mono-Black core of fodder-style creatures in Shambling Ghast, Eyetwitch, Skyclave Shade, and decayed zombie tokens from Jadar, Ghoulcaller of Nephalia that is headed up by Lolth, the Spider Queen, which Fell Stinger fits in absolutely perfectly. The body is super reasonable, it is an awesome blocker, and it keeps the cards flowing which is great for a deck that constantly is looking to trade off resources. Furthermore, you can use it to deal those last few points too!

If the Lolth black decks can take the next step in Standard, Fell Stinger will be a huge part of the equation.

While we're on the subject of Black exploit creatures, I'd like to remind everyone that it's not 2003. Carnophage and friends haven't been playable since the Bush administration, as we now get creatures in all colors that are way above rate. A Watchwolf that dings you every turn is just not going to get there.

If planeswalkers become a large part of the metagame (which they currently aren't), Graf Reaver could find a niche as a reasonable maindeck answer, but for the most part this is just Carnophage and that's not nearly exciting here in 2021. If zombies is desperate for a 2-drop or if planeswalkers end up being a major part of the format this could end up seeing some play, but in a vacuum it is very unexciting. 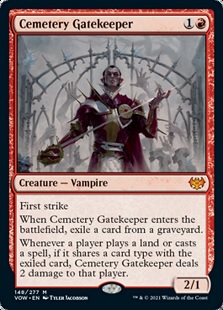 With fetchlands, it is trivial to set Cemetery Gatekeeper to "land" on turn two, making for a two-drop Zo-Zu The Punisher with a much more battlefield ready body. It does say "play a land" making a bit worse than Zo-Zu is against fetchlands or other effects that put lands directly in play, but that's still a very powerful effect. It's also just as good on "instant" or "sorcery" which are also very easy to put into the graveyard.

Cemetery Gatekeeper may be the best card in the set for older formats and Cube, but it's also a very relevant card in Standard too. Just imagine exiling a creature against Mono-White Aggro or Mono-Green Aggro, or a sorcery against Izzet Epiphany. Add this to the fact you're getting a relevant body with a good creature type and some incidental graveyard hate and we've got a winner!

Sometimes you're Chris Bosh, but you play on the same team as Lebron James and Dwayne Wade.

Volatile Arsonist isn't a bad card per say. Five mana for an evasive 4/4 with haste is pretty much par for the course at this point, and dealing some damage here and there is nice too. However, even with the ability to turn into Dire-Strain Anarchist at some point for some extra size and damage, Volatile Arsonist can't hold a candle to Goldspan Dragon, or really any of the recently printed 5-drop Mythic dragons. It's far easier to block, does much less, and just isn't the game ending threat that a 5-drop needs to be. Even if you're in Red/Green, something like Wrenn and Seven is a more appealing top end threat.

Volatile Arsonist will be absolutely backbreaking in Limited, but is doubtful to end up seeing any Standard play.

I know there's been a lot of whining about Alrund's Epiphany, but I've been enjoying this Standard format a lot so far. It's important to note that when Standard is at its smallest, there's a limited card pool to help answer things. Now we get another full set to flesh things out, as well as flesh out some of the themes in Innistrad: Midnight Hunt!