A big part of whatâs let Magic stick around for twenty years is that itâs always changing. Every few months, we gain a whole new set of pieces to work with, but Magic is so vast that new interactions often slip through the cracks. Today, Iâm here to help prevent that from happening by sharing how I process a new sets for Commander.

Sometimes, it doesnât take much looking. If youâve been playing a creature-based storm deck with Priest of Urabrask and Burning-Tree Emissary for a few months and they print Satyr Hedonist, itâs pretty clear that youâll want to try it out. 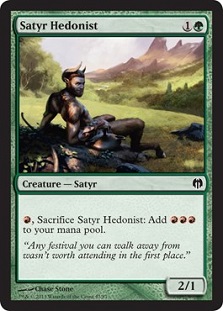 Now, you may be wondering why Iâm taking up space telling you about cards youâve already taken note of; the answer is that understanding why they drew your interest will help you hunt down other worthwhile additions to your decks. The thing that draws these cards together is their functional similarity to cards youâve already tried, but as I noted when I wrote about themes: Many cards connect two disparate functions.

Take Blood Artist; the cardâs death trigger makes it an easy inclusion in a deck full of ways to sacrifice tokens, but a deck built around Ajani's Pridemate and Archangel of Thune would want it because Blood Artist creates so many separate life-gain events. You might have Blood Artist in a deck and know itâs good there, but you donât need to wait for another Falkenrath Noble to make that knowledge useful. Figuring out why itâs good will allow you to add in either Dark Prophecy or Shattered Angel as appropriate.

The same methods for finding individual cards to slot into your decks also work on a larger scale. Cards often come in cycles with a shared characteristic, and if that overlap happens to be the same thing that drew you to the first card, itâs pretty likely to work in the othersâ favor as well. 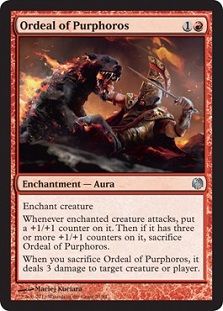 Iâll eat my hat if Ordeal of Purphoros isnât part of just such a cycle. So, if you have a deck built around Celestial Ancient, Oath of the Ancient Wood, and Simic Guildmage, Iâd keep my eyes open for the rest of its kin.

The same logic extends beyond cycles and up the chain to mechanics. Any deck that loves Abhorrent Overlord is likely to make pretty good use of Umbra Stalker and every other black devotee that Theros yields. 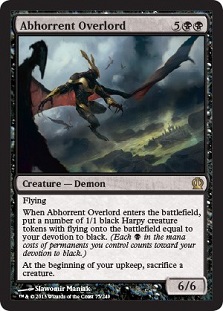 In fact, we can take things yet one more step and look at themes. Theros has an enchantment theme, so anything in that vein is potentially of interest to a deck with a similar focus, and the same goes for less obvious themes, such as the theme of death in Innistrad.

That just about covers the best ways to find new cards that fit synergistically into your existing decks, but now that weâre up to mechanics and themes, we can do moreâby building a new deck. Commanderâs singleton nature makes it difficult to build around cards other than legendary creatures, but mechanics and themes often offer enough cards to work with. For instance, take this deck I built around extort after Gatecrash released. Even if the actual mechanic isnât on quite enough cards to support a deck, you can usually find a couple of oddball cards from Magicâs past that can fill in.

Once a mechanic has piqued your interest, itâs just a matter of finding ways to synergize with it. With heroic, Iâd like to try going Justice League and filling the board with heroes before triggering them all with spells such as Cauldron Haze and Strength of the Tajuru, but casting a bunch of cheap, single-target spells on the same hero is just as valid.

Of course, it is possible to build new decks around a single card. Itâs just that it had better do something pretty unique to warrant all the trouble of tutoring for it and Recovering it when itâs inevitably dealt with. I guess what Iâm trying to say is: Be on the lookout for the Possibility Storms of the world. You might just find something worth the struggle.

With the above methods, you too can pore over spoilers for hours in search of fun, but thereâs a simpler way to find a card youâll enjoy.

Go out to some local prereleases, and try things out. Maybe monstrosity doesnât have you too excited upon reading it, but the good folks at Wizards say itâs a lot of fun, and after Innistradâs double-faced cards, Iâm inclined to trust their judgment. Besides, if you know somethingâs fun before moving into the realm of Commander, youâll never waste time building a deck only to find that it doesnât interest you.

More importantly, not every card needs to adhere to a theme. Sure, theming is a great way to differentiate your decks from one another, but if you never play with the âgood stuffâ in the first place, youâre missing out on some fun cards. New cards may not fit one of your themes for a long time, but if you already know you enjoy a card, you can slot it into some other deck itâll help instead of waiting forever.

So, there you have it; thatâs how I look for new cards to try. Iâm sure the methodâs not foolproof, so Iâd love to hear how you go about looking at spoilers. What makes a card stand out to you? How many new cards do you try? And most importantly: What has you excited for Theros?