If you follow me anywhere on social media, you've likely seen that I absolutely love Esika, God of the Tree. I fell in love with her quickly, as her card was very flavorful, did something sweet for Commander, and also played off of multiple Norse gods. These influences include the goddess of apples and youth Idunn, Heimdallr - the god who watches the rainbow bridge Bifrost for signs of invaders, and Freyja, goddess of love - who also travels in a chariot driven by two cats. 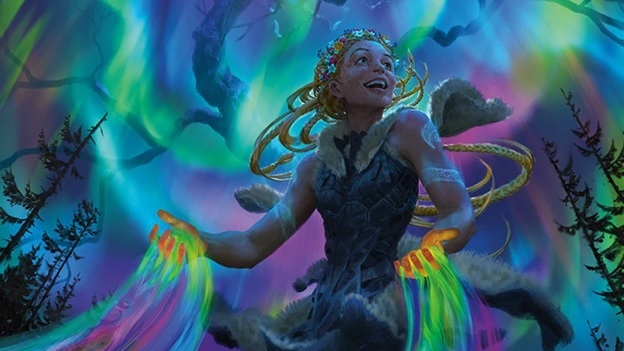 I love Freyja a lot when it comes to Norse mythology, and I love the major myth involving Idunn where her apples are stolen and the Aesir start to wither away. Those are both for another time, perhaps if I get around to sitting down and putting together a follow-up to my Mythology Behind Kaldheim article. But for now, I want to talk about the coolness of Esika as a card.

Now, I know what several people are thinking: five-color good stuff. That's basically how everyone approached this at first glance. After all, you're probably trying to cast her backside - The Prismatic Bridge - more, right? Well, I say that's boring, and a little too easy. These kinds of decks are a dime a dozen already, and can largely be solved by swapping whatever five-color good stuff Commander you already run and replacing it with Esika.

So, I came up with this neat little idea to place some restrictions on the list instead:

So, I set to work trying my best to make it work! As if happens, though, many of the Green cards with off-color abilities are, frankly, quite terrible. Take a look at some of the better end of the cards I was finding:

When one of the best off-color cards I could find for Commander was Cylian Sunsinger, you know we're in for a bad time. Instead, I tried focusing a little harder on hybrid cards and some of the synergies with weird off-color cards. It creates some weirdly interesting effects that I'm a big fan of. Additionally, putting a few split cards into the deck allows us to have one side - usually a somewhat powerful effect - that can be cast within the normal restrictions but has another side that can be used with right mana, much like the face Commander.

Here's how the deck ended up coming together:

If the list kind of feels like a weird soup of cards that lack a ton of real synergy, well, you'd be right. The lords kind of help mitigate that to bring things together a little more harmoniously. Some really good off-color ability cards managed to survive a purge as well. Sunblade Elf pumps the team nicely, the Ana and Thornscape Battlemages offer a small variety of ability choices, and Yasova Dragonclaw can swoop in and steal creatures away for a turn. Even a more mediocre card like Thornscape Master turns out to be solid when used for creature protection.

There're also some sweet five-color artifact abilities that can be used in the form of Golos, Etched Monstrosity, Door to Nothingness, and Legacy Weapon. There's a handful of fixing cards to help us get those online - as well as The Prismatic Bridge - in the form of Chromatic Lantern, Joiner Adept, and The World Tree. I also put in a number of solid lands - mostly with at least one Green source in them - to help with this as well. You don't have to go quite as hard as I did, but you definitely want some number of lands to make the best use of your off-color spells and abilities.

I hope you've enjoyed this somewhat different take on how to do Esika, one of my favorite cards and characters from Kaldheim. There's still plenty of great legendaries the set has to offer and I may just have to explore more of them soon. This set is great and if you haven't had a chance to check it out, I highly recommend doing so!