Narfi was a king whose father had once struck a deal with the elves. The arrangement was simple: Narfi's father was granted a longboat that could hold all the people of his realm to raid as they pleased in exchange for their aid when the elves went to battle. For years, his people pillaged and amassed a wealth of riches. Eventually his father passed and Narfi ruled in his stead. One day, the elves came to see Narfi's end of the bargain upheld. He refused. 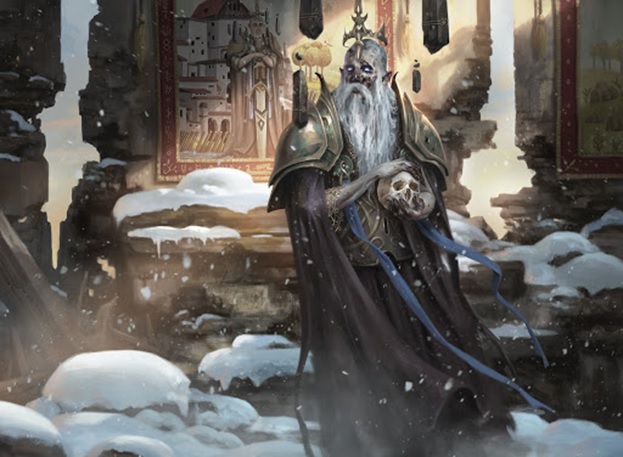 In an effort to save his people, Narfi tried to whisk them away on the magic longboat, but the elves had taken hold of it, barring them from leaving until he fulfilled the deal. Soon after this encounter, a mysterious man approached Narfi offering a new deal: he and his people would be protected from death if they would fight against the elves instead. Narfi agreed.

As his people fought on and fell, they arose again not as men but as draugr - undead monstrosities. As Narfi watched in horror, he discovered that he too had joined the ranks of the undead and that the mysterious stranger was none other than Egon, the soon-to-be god of death. And so, King Narfi, his people, and their treasure endured for ages until the opportunity to pillage anew rose courtesy of Tibalt, who used the betrayer king's might to imprison the trickster god Valki indefinitely. 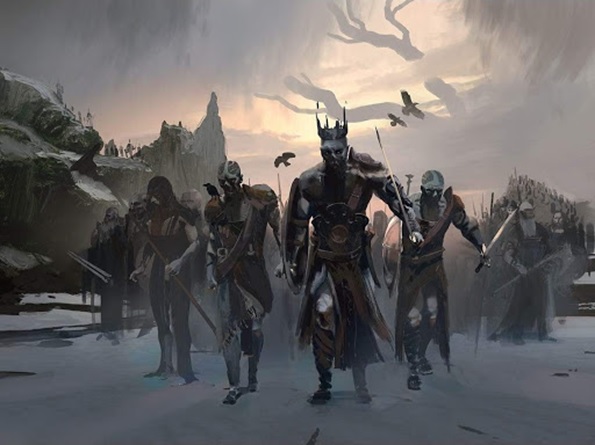 Like many of the characters in Kaldheim, Narfi draws influence from the world of Norse mythology. Perhaps not so much in his design, but in Norse lore, there is actually a being named Narfi who is the father of Nott - the night incarnate - and is a child of Loki. It's undoubtedly a bit ironic then that here he actually imprisons Magic's Loki analogue.

Knowing this bit of lore, I sought to make a Commander list that would represent this aspect of him and his lore a bit. Check it out:

With this list, I sought to fill three distinct roles:

I feel like each of these is handled quite well within the context of the deck. Yes, you could probably forego some of the snow creatures in favor of juicing up the zombie package that much more, but where's the fun in that? The way I see it, we should be doing interesting and different things here! If I wanted just another boring old zombie deck, I'd probably just pick up Gisa and Geralf or Grimgrin, Corpse-Born.

Many of the staples are here still. You've got your lords, your Sidisi, Undead Vizier; and you have your Endless Ranks of the Dead. The real fun begins when you add in the other cards. For example, it's not exactly hard to get to the ten snow permanents required to set off Marit Lage's Slumber to get you a sweet 20/20 indestructible token. It gets even easier when you can use its scry ability alongside Scrying Sheets to ensure you get as many hits as possible. Vela the Night-Clad and Cover of Darkness both give all your zombies very flavorful nighttime evasion, while Scion of Darkness joins the usual cards like Havengul Lich to reap the riches of your opponents' graveyards.

In fact, speaking of reaping riches, I noticed as I was exploring Narfi's lore for this article that his peoples' pillaging and raiding ways aren't very well represented on his card at all. The Legends of Kaldheim article on the Mothership even indicates that the wealth amassed as a result of this "overflowed the Port of Marn, and his treasure and military became famous across the realms." It felt weird to not have this really represented all that much in the above list, and it was hard to make enough cuts to add an additional subtheme. As such I ported the first list over but with a greater focus on artifacts and stealing effects:

By and large, this list is doing the same things as the first one with its zombie theme, and even got rid of some of the weaker ones in favor of a few artifact tribal lords. Now you can pillage and steal from your opponents to your heart's content. If you have the mana for it, you can even steal their minds with Mindslaver - repeatedly if you have an Academy Ruins! We also have something the first list really lacks: mana rocks.

I actually debated having Sol Ring in the first list when I noticed I'd accidentally left it off. But then I thought about it and how Narfi is not just the ruler of his dead kin, but also is of the snow and the cold. A ring of warmth probably wouldn't vibe well thematically and cuts were getting a bit too tight as it was, so I let it ride as is in that list. Here, however, there's no way his greed wouldn't get the best of him and fuel a great desire to hold this mighty ring in his cold hands. You can get more than just artifacts, though. Steal all manner of permanents - from creatures to lands!

All belong to the undead king, and there they shall remain for all time.

I'll be back next week with more sweet Kaldheim goodness. I can't get enough of this set in flavor and setting and I'm itching to get in some more excellent decks soon enough. Before I go, I'd like to leave you with one of my favorite folk metal songs that bears the betrayer king's name. Check it out!