If there's one thing I love, it's some good old fashioned heavy metal. I love the wailing riffs, the pounding drums, and the shrieking growls of the vocals. The dark imagery feels powerful and the energy is infectious. There's nothing like the adrenaline rush of a massive mosh pit or the sensation of banging your head at the precise moment an epic solo kicks in. There's just a style and vibe that comes with the culture and sound of it all that's been a central part of my life for roughly half of my days.

Earlier this year, Wizards of the Coast leaned heavily into this aesthetic with Kaldheim, giving metalheads something to quickly fall in love with. With it came something really cool: heavy metal themed Secret Lair drops! The first of these (we'll come back to the second one in a bit) was the Party Hard, Shred Harder and it was nothing short of being jaw-droppingly cool.

They broke the mold on the very idea of what a Magic card could be and what one could look like. They were everything a metalhead like myself could want and I instantly went and ordered multiple copies. Were all the cards ones I would play? Probably not, but they're just so aesthetically pleasing that I couldn't resist. Since I picked it up, however, there was one glaring elephant in the room: I now felt like I had an obligation to build Thraximundar. 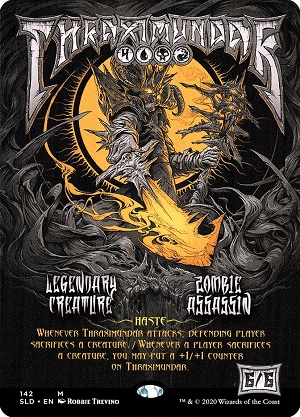 Thraximundar is one of those cards I've long wanted to build a deck around. When I came back to the game in 2011, I saw it and it was always in the back of my mind to build a deck around but never ended up being something I did. When I finally did build a Grixis colored deck, it was Crosis, the Purger before shifting into Garza Zol, Plague Witch, who I felt was better suited for what I was going for with the deck. When I managed to get a copy with the release of Commander 2013, I was instead drawn to Nekusar, the Mindrazer, in the hopes of fulfilling my childhood love of Underworld Dreams decks.

Since then, many other decks have come and gone. There are infinitely better commanders in these colors, which made Thraximundar feel like a bit of a weird choice for a set like this. It wouldn't be hard, after all, to find some other super metal legendary creature to give the heavy metal treatment to. And so, Thraximundar sat in my binder for a while, until I sat trying to think about what to write next and went through my list of Classic Commander potentials and saw him there.

If you need a brush-up on what Classic Commander is, you can find my article laying it all out here. The long and short of it is that it's a snapshot in time - a format that predates the made-for-Commander releases starting with Commander 2011 and is thus New Phyrexia backwards. This is the kind of place where Thraximundar can really shine, before he was outclassed by many more modern legends. Check out this list:

At first, I was kind of at a loss for what to do with this list. A part of me wanted to work on leaning more into the sacrificing plan, another wanted to do more reanimator, and another still wanted to just do big good stuff nonsense. I focused a little more on trying to do neat things with the sacrificing things plan. Sure, we can set ourselves up for some shenanigans with that (Hell's Caretaker, Ashnod's Altar, Attrition, etc.) but the real fun is getting the opponents to sacrifice their stuff. Call to the Grave, Barter in Blood, and Grave Pact are all excellent at this, and they all fuel the main man himself.

If you need to sacrifice stuff yourself, no worries. There's plenty of ways to make sure there's creatures available. Bloodghast, Nether Traitor, and Reassembling Skeleton all come back regularly, but there's plenty of ways to get tokens out as well. If you lose any of the aforementioned creatures, you can get some sacrificial eldrazi spawn tokens thanks to Pawn of Ulamog. If you don't want to set that up, however, no problem. Cards like Bitterblossom, Goblin Assault, and Lich Lord of Unx have you covered. Zombies are a minor tribe here as well since they can make lots of tokens and get each other back from graveyards with ease, thereby giving us plenty more to sacrifice.

The reanimator package survived a little bit. The deck doesn't exactly have much by way of straight discard itself, but most of the deck's top end is easy enough to get out on your own merits. They're often lightning rods, so the reanimation side of things can make sure they stay on the board one way or another. If needed, it's possible to use Liliana Vess' +1 to make yourself discard a card. Even if we can't grab something meaningful out of our own graveyard, though, we can always make good use of our opponents' yards. After all, they're losing tons of creatures, making it easy for Thraximundar to bring back some minions under his control.

The best part, though, is we get to make use of that other heavy metal Secret Lair: The Unfathomable Crushing Brutality of Basic Lands! 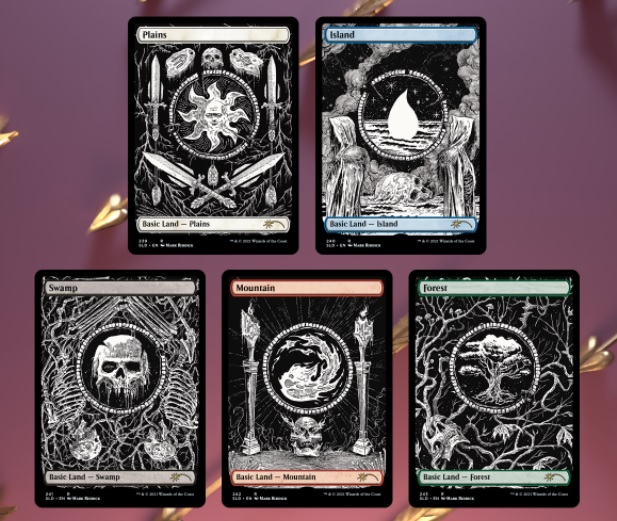 Available for a short time in February with the Valentine's Day-themed superdrop, these lands were meant to really accentuate that heavy metal aesthetic. I myself bought a pair of foil ones to go into my all-foil Sharuum the Hegemon deck, and these are perfect for a list like this as well. There's lots of great artwork for the cards in this deck that wouldn't be terribly out of place for bands such as Cannibal Corpse or Emperor or Death. It ties up is, in general, a stylishly flavorful home run.

The best part is that the deck is solid enough in terms of power to hold its own against a lot of modern decks. If you wanted to upgrade it with some more current things, I'd start right off the bat with cards like Faithless Looting and Merchant of the Vale to get some of the draw/discard engines going. This helps fuel your bigger reanimator strategies while also pitching creatures that can be brought back easily (i.e. Bloodghast).

Regardless of how you play, be it Classic Commander or a more current approach, let Thraximundar take center stage and open up the sacrificial pit. Try it out at your next Commander night, raise those horns, and slam into your opponents' life totals! Melt their faces off!