When I started playing Magic: The Gathering, I found myself enamored by everything about it. The fantastic gameplay, gorgeous card frames, and incredible artwork all drew me in. I found myself growing to love characters such as Gerard, Sisay, Karn, and Urza. I wondered about the mysterious Teferi and the nefarious Lim-Dul, who we never saw on card arts until several years later. Legendary creatures like the Sliver Queen, Cho-Manno, Revolutionary, and Palladia-Mors would make me light up just looking at them, never mind playing them.

Then the Apocalypse passed. Me, being a naive child, thought that surely meant the end of Magic. After all, the game's world was gone, right? Wrong. It was reborn anew and after a 100 year time skip, we were introduced to Odyssey. I didn't know what to expect, but then I saw this art and I was instantly sold: 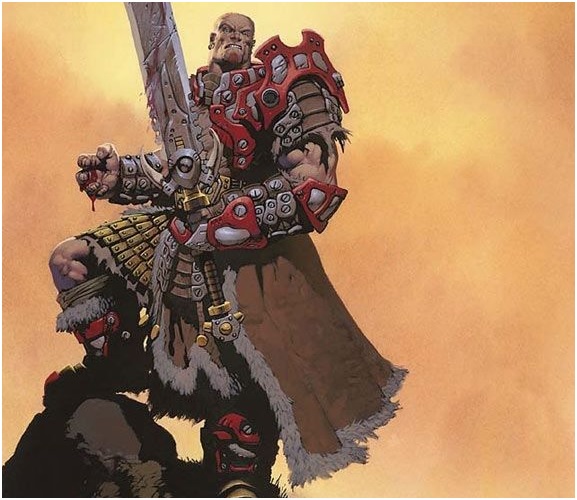 There was just something downright savage and cool as hell about Kamahl's design and this art got its hooks into me immediately. The set was interesting to say the least, and very different, playing heavily on the graveyard for a change. Soon after we got the Black-centered Torment and then finally Judgment to round out the block. It was with the latter set that I bought my very first fat pack, which came with the Judgment book. I had started from the end, but I was nonetheless enthralled.

The whole block had been about the quest - or should I say odyssey - to obtain the Mirari and the various groups that tried to take it from one another. In the Odyssey novel, Kamahl travels to the Cabal City to seek it out and fight in their pits, and finds the city under attack by a huge dragon. He kills the dragon, but is then pinned under its corpse, allowing the aven Lieutenant Kirtar to take credit for the kill - granting him the Mirari.

Eventually, it comes to Chainer, Kamahl's friend and companion in the Cabal's pit fights. Chainer was granted use of the Mirari for aiding in a battle against the White mana-aligned Order that Kirtar belonged to. Soon after, he staged a coup using the powers of the Mirari, exiling the Cabal Patriarch to the city of Aphetto, thereby taking over the Cabal City for himself. The Mirari drove him insane, however, and he soon found himself turning into a hideous form of nightmares as he faced his old friend Kamahl.

The story of Judgment picked up right from there, with Kamahl fulfilling his nightmare mage friend's dying wish: take the Mirari away and secure it. He made his way back home to the Pardic Mountains with his quest supposedly complete. However, in typical tragic fashion, the wish orb drove him mad as well, and he wiped out many of his barbarian comrades before turning to his sister, Jeska, and striking her a mortal blow.

His grief snapped him out of his madness and he went to seek aid from his druidic centaur friend Seton. As Seton worked to try and heal Jeska, Kamahl met with Thriss, the Nantuko leader of Krosa. Here he taught Kamahl to hone his power and turned the barbarian toward a druidic way of life. Seton was unable to heal Jeska, but when they were discovered by Braids of the Cabal and the merman Ambassador Laquatus, Braids took her away with her.

Braids turned on Laquatus, who sought the Mirari. He used a resurrected Balthor the Defiled - who had died facing his champion - to battle Kamahl. With a heavy heart, Kamahl ended his friend's suffering. He then turned his blade to the mocking merfolk and drove the Mirari sword clean through Laquatus, killing him. He then pinned the corpse to the ground where the sword would lie, enriching the life within Krosa as a result.

Jeska was then taken to the Cabal Patriarch and when he tried to kill her, she instead became the dark Phage the Untouchable - this due in no small part to her latent planeswalker spark. She then battled Ixidor and his lover Nivea in the new Grand Coliseum, killing Nivea in the process. Ixidor was banished to the great desert and created Akroma in his delirious state. She left for the coliseum and battled with Phage. In this battle, Phage unleashed several gigantic deathwurms, turning briefly back into Jeska before re-absorbing them into herself to become Phage once more.

Eventually, her and Akroma did battle again in the city of Sanctum. Here, Kamahl arrived with a new weapon called the Soul Reaper, crafted to destroy Akroma. When he used it, he not only killed Akroma, but Phage and a woman named Zagorka as well. The three of them fused and became Karona, the False God.

The events that followed are honestly messy and highly controversial among Vorthos because of parts where Karona supposedly meets with long dead characters such as Serra and Yawgmoth. Still, she ends up being the manifestation of all mana on Dominaria and makes all beings bow before her. She leads the continent of Otaria into ruin as its people fight among one another for her favor. In the end, she is betrayed by her companions - Sash and Waistcoat - who drive the Mirari sword, brought to the scene by Kamahl, through her. This causes her to split back into Akroma, Zagorka, and Jeska - no longer Phage. Only Jeska is alive, and her planeswalker spark ignites, where she meets with Karn who explains that the Mirari was meant to be a probe to watch over Dominaria in his absence - only for it to malfunction.

What became of Kamahl is unknown, though later Jeska would return to Dominaria to mend the largest of the time rifts. With Radha and Venser at her side, she gave her life and sealed away the final rift. This caused the Great Mending, which changed how planeswalker sparks worked across the entire multiverse and set into motion many of the modern stories we know and love. 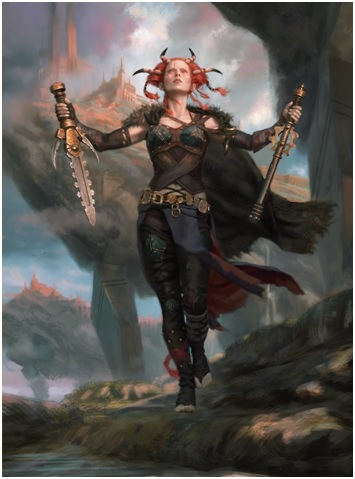 While I'm clearly only scratching the surface of this story, there's no doubt that I truly have come to love them over the years. So, naturally, when the above artwork was previewed as a teaser for Commander Legends, I nearly jumped out of my seat with excitement. It was Jeska - and in full art meant for a planeswalker. Then we got this art a few months later: 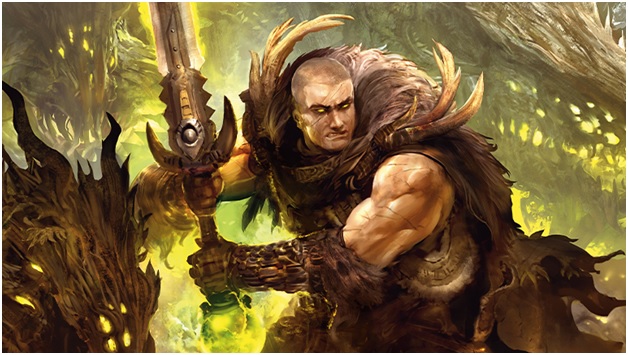 I knew who it was immediately. I'd know that bald head and Mirari sword any day! I was getting so excited I was ready to burst. Otaria was getting some love in this set! Then finally, the previews started pouring in and the cards for both Jeska and Kamahl were previewed with a certain magic word on both of them: Partner.

These two cards made me immediately know what I needed to do: create a Commander deck that brings these two classic Magic: The Gathering siblings together. And so, I set forth to build a deck that does just that:

My goal was this deck to keep it as in-flavor as possible. For several reasons, I had to flub a few things, such as adding barbarian-related cards like Lovisa Coldeyes and Meng Huo, Barbarian King to help Balthor the Stout work just a little bit better. Many characters met through the story such as Stonebrow, Radha, and Karn all make appearances. Even Kamahl's future descendant, Baru, shows up to pump all our creatures that much more.

Iconic spells like Kamahl's Druidic Vow and The Mending of Dominaria make noteworthy appearances too. Even the Breaking Point spell Kamahl is depicted using in his madness on the Pardic Mountains can be used here! Even the Mirari has a surprising amount of spells that can be used to gain value with both ramp and damage dealing alike. What turned Kamahl himself to madness can instead be used by yourself for some major back-breaking game moments.

We also have another new legend from Otaria to add to the mix as well: Toggo! You might recognize him from several classic Onslaught block flavor texts. Toggo tried to craft the best weapon he could be for settling for his ultimate creation: the rock! My personal favorite flavor text of his is from Shock, which reads "I love lightning! It's my best invention since the rock." While the rocks themselves don't do too much for our gameplan most of the time, it's still a fun flavorful addition that can get some opponents from time to time.

I am kinda bummed that I can't include the new Akroma into the mix because of the color identity, but that's fine. We can save a Jeska and Akroma partner deck for another time and instead run the alternate reality Akroma, Angel of Fury into the deck in her place.

There's a ton of fun to be had here and I can't wait to bust it out at my next Commander game in a few weeks' time. Commander Legends is really shaping up to be a wonderful set with something for just about everyone. I hope you enjoyed my little bit of time gushing about the continent of Otaria and some of the characters that shaped my love of Magic lore.

Who will you partner up for your next Commander deck?