It's time for day two of no Blue in our coverage of the New Player Commander Decks. But we're still going to go in a really different direction from the easy-going Selesnya and the hard-partying Rakdos.

Today's guilds are so tightly wound, it's like they're ready to pop all the time. That's bad, too, because if the Boros (

) explode, it gets really bloody, and if the Orzhov (

These decks are awesome. They're a great price, great quality, and an excellent way to get into the game or just up your stable of decks. If you've been playing the same three decks for the last five years, maybe pick up a couple of these and see what you can do with them. They play great right out of the box.

But what's Convertible Commander if we don't try to look at things from a new angle, right?

Let's take a look at our first deck, led by the ever-awesome Anax and Cymede. 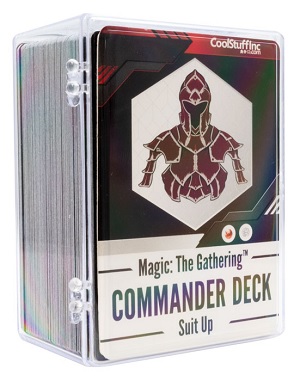 *Note: This is version 1.0 of the deck. Some cards in later batches of this deck may vary*

Anax and Cymede really want two things: lots of creatures on the battlefield and to be targeted. This deck is set up to do just that. But the alternate commander is what caught my attention here. Tiana, Ship's Caretaker has a really powerful ability if we leverage it right. Turns out there are a fair number of artifacts and even some enchantments which want to go to the graveyard. Tiana, however, lets us get them back... over... and over... and over. Let's build an optionboard which lets us wrench more value out of Tiana, shall we?

The first thing we can do is draw more cards, and in many cases, it means making more mana. Both of these things are good, so we're going to slide Boros Cluestone next to Boros Locket. We're also going to add Mind Stone and Hedron Archive. Commander's Sphere, too. Sorcerer's Strongbox might take a couple tries, but eventually we'll draw three off it. Capashen Standard is a great target for A&C when they're on the battlefield and is a reusable three-mana draw-one, which is fine in this color set.

We can blow stuff up, too. Unstable Obelisk and Universal Solvent will make use of all that extra mana. Pyrite Spellbomb can pick something off, add a couple of extra points of damage, or just draw us an extra card when we need it. Seal of Fire is more limited but still worth the slot. Soul Snare will encourage your opponents to attack elsewhere. Choking Restraints is pricey to exile but cheaper to get started. Dispeller's Capsule can remove pesky enchantments and artifacts, and Aura of Silence will annoy a lot of players.

Who says we have to do it one at a time, though? Oblivion Stone will take out everything except for things we choose to save, and Tormod's Crypt will insure no one else is messing about with their graveyards. Oh, and Eye of Doom isn't really a board wipe, but it'll certainly get rid of the most important things on the board.

Nevinyrral's Disk and Scourglass are a couple more wrath effects worth considering if that's more necessary in your meta. Acidic Dagger is expensive but gets points for going old-school. Pursuit of Knowledge might be worth a test; drawn relatively early, it can sit out while you play out your hand, then draw a new grip just as we run out. We return it and do it again.

For cuts, start with instants and sorceries, then look for enchantments in there primarily to activate Anax and Cymede, like Conviction. They'll be a lot less important when you're looping Eye of Dooms.

20 cards and we've got a deck which plays much slower, with fun interaction and lots of great abuse of power. Should be a good time. 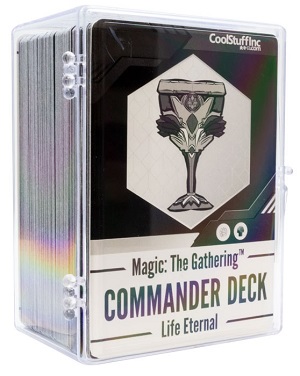 Our Orzhov deck takes a different tactic. Helmed by Ayli, Eternal Pilgrim, the deck wants to gain a bunch of life and win on its own time. The creatures tend to have high toughness to maximize lifegain, and they also mostly have great enters-the-battlefield abilities so we get some value before throwing them in the 'yard for some extra life. Of course, we can shift over to Arvad the Cursed and play into a Legendary/Historic theme, but for this deck, let's stay with Ayli.

*Note: This is version 1.0 of the deck. Some cards in later batches of this deck may vary*

Playing with the deck made it clear what I wanted: reanimation. I want my creatures to see the graveyard the way most of us see a train station or parking spot - a temporary waystation. Ayli takes care of sending them there, we just need some ways to get them back.

We can take out some of the Legendary/Historic matters stuff - as well as a few of the legends themselves - for these 10 cards. The thing is, these cards will make this deck play very differently. They're all variations of the same theme. We sacrifice a card to Ayli or some other effect. Then one of these comes along and gets the card back. Sometimes it's back to the battlefield, sometimes to hand, but no matter, it gets the creature back. There are loops with Sheoldred, Karmic Guide, Phyrexian Reclamation, Sigil of the New Dawn... it goes on and on.

It's worth pointing out you could go a different direction and use one-shot effects like Animate Dead and Dance of the Dead. There's nothing wrong with that. Some of those are great because they let us target every graveyard, letting us take the juiciest targets, not just ours. There's also something to a card like Sepulchral Primordial; looping that ends games pretty quickly. Luminate Primordial, too. That said, with more and more seven-drops, we start needing to add lands and mana rocks, and it becomes a very different deck. Life goals!

So it looks like we wound up with two recursive optionboards, although they will play out very differently in each case. In both cases, though, they should add a new dimension to each deck without having to carry another deckbox.

Shameless self-promotion: if you're new to this column because you've been following this weeks' Commander release and you like this idea of a few cards making a deck different, please check out the rest of the series! It's a fun way to get maximum value out of your decks. I'd appreciate it!

And now I'm going to hand off to the illustrious Jason Alt, who will no doubt have some 75 percent-y things to say about the Golgari (