1. It's nice to have great friends. I have a really great one back in my old hometown. We don't talk as much as we should, but he's one of those guys I know I could call anytime and we'd pick right back up where we left off. Back in the days of Shards/Zendikar, we used to jam some games. We drafted with a group, we played some casual, and eventually we all started discovering EDH, so we all bought in to that. His life has changed a lot in the six years since I've moved away: kids, house, new jobs, all kinds of stuff, plus most of the playgroup moved away. So he hasn't played in several years. He knows I'm still plugged in, so when this dude was cleaning up his house and he came across his old box of cards, he thought, "Mark could probably use them!" He boxed them up and sent them to me. 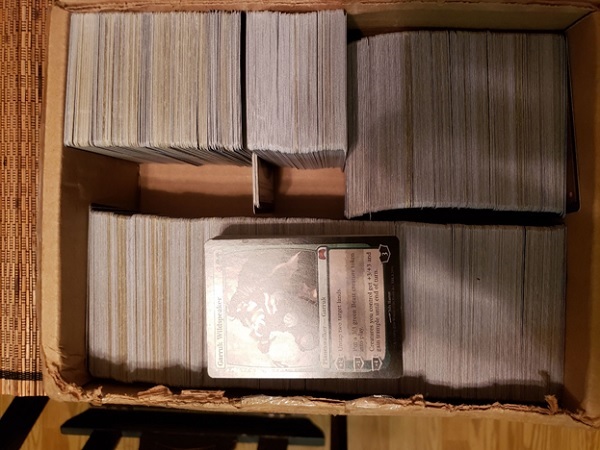 2. My dad was visiting this past week. He was on his way... oh, it doesn't matter, he was hanging out at my house. We play together when we hang out; he plays a lot where he lives and is an interesting and rather cutthroat EDH deck designer. I thought it'd be fun to dig through this new box of cards I'd just gotten and see if there were a deck in there, so we went through it. It was a LOT of cards. We had a great time figuring out which commander to use and how to leverage what we had with such a limited card pool. Here he is, with me. And my daughter. He basically refuses to be in pictures that don't include her these days. 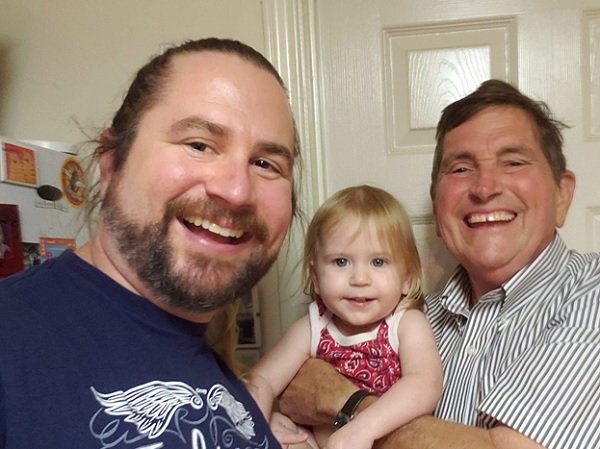 3. I built a new EDH deck this week, but I went about it a funny way. I had a box of cards given to me and thought it would be fun to see if there were a deck in there. Kind of like Sealed, but for Commander. As I was building it, my mind drifted to "...could I use this for my series? If so, how would it convert? I do write Convertible Commander, after all." Then I realized one of the ways my fellow author and 75% Commander creator Jason Alt says to build a 75% deck is to limit your card pool. I'd done that! So I wrote him and asked if I could do an article under his title this week. He graciously agreed. Out of a box of roughly 700 cards, mostly from Shards of Alara and Zendikar, this is what I came up with. 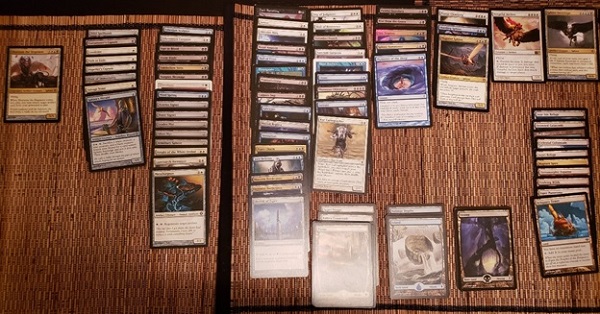 Sharuum the Hegemon, built 75%-style from a box of cards sent by a good friend halfway across the country with my dad.

Sharuum is one of those Commanders. You see her hit the table and you roll your eyes, knowing you're either going to be combo'd out (on turn three!) or locked out of the game. That doesn't normally make for particularly fun gameplay, though she's certainly an excellent choice for highly competitive Commander. She's rather hard to dumb down, though, if you're building to her strengths, because she gets out of hand so quickly.

However, when you don't have the entirety of Magic's history to lean on, and just what's in the box in front of you, it's a very different deck. In this case, we started with my old standby My Deck Tickled a Sliver (mana, draw, threats, answers, synergy). We assigned fairly random numbers to each category (and of course, some things fit into multiple classes) and started making piles. Then we made cuts.

40 lands, blah blah. If you've ever read anything by me you know that's always the place to start, so we started there. Except for the non-basics (which include the excellent Celestial Colonnade), they're all beautiful full-art lands. We also noted we've got some fairly high casting costs (though the deck up there is showing it's mana curve, which came out beautifully), so we wanted... well, we wanted all the ramp we could get. That led to some questionable choices (does anyone really want the mana Myr?) but necessary ones. Besides, Sharuum buys back artifacts, so they're less bad. We ended up with 50 mana sources total, which seemed reasonable. We also added things like Knight of the White Orchid and Kor Cartographer to thin and make sure we hit our drops as long as possible.

Thankfully Blue does draw well. We've got instants and sorceries that draw cards, so we shouldn't have too much trouble keeping up. We even got a Moriok Replica, which is wonderful generally but even better here because Sharuum can get it back for more value. Mind Spring is useful because as a late-game draw it will refill us thanks to all our mana. Mysteries of the Deep is expensive but the Landfall trigger makes it worth it. Jace Beleren should be worth three cards for 3 mana, but even if it's a

We found plenty of threats. Magister Sphinx sets someone to 10 and can be re-bought with Sharuum. Sen Triplets is slow but can really hamstring someone who's getting too out of hand. Sharding Sphinx is lovely as a fair amount of our creatures are artifacts, so we should be able to keep up a reasonable amount of little dudes for blocking or an alpha strike. Vengeful Archon and Phyrexian Obliterator are our outliers here, but both are too good on their own to not be included.

We had a good amount of answers, too. We both agreed Path to Exile was an awesome inclusion (thank goodness there was one in the box!) but I was grateful for the Executioner's Capsule and the Dispeller's Capsule. We're not flicking things in and out of the 'yard all the time, but it's nice to know in a pinch we can probably reuse those once with our Commander. The Nihil Spellbomb is here just to hate on a Zombie player, plus it's searchable with our artifact tutor. Worth it, and it can always be popped for a card if necessary. Propaganda will help keep us alive, and we ran both sweepers we got, Day of Judgment and Planar Cleansing. Finally, we ran just about every Oblivion Ring or Pacifism-style effect we could get our hands on.

For synergy, we had choices. First was running Sphinx Summoner. It was too cute not to include in this deck. We also ran some plain ol' fun cards, like Painful Quandary and Luminarch Ascension. There's a suite of recursion, both for creatures and artifacts, which nicely gets a lot of our creatures. Praetor's Grasp needs a little attention, because it's from before the "you may spend mana as if it's any color" rider they put on stuff now. Best go after a player with a color you can cast! We're running a few cards which help out artifact players, like Etherium Sculptor and Ethersworn Canonist. And there are a couple of copying or stealing cards, specifically Clone and Steal Artifact, because what's more 75% than using their stuff against them?

The deck wants to play like the Esper Control decks we all used to try to draft from back then; card-for-card exchanges, drawing whenever possible to keep up, and finally sticking a finisher they can't deal with. It'll be quite the fight, and with three opponents or more we've got to pick our targets for our removal very carefully. However, I'll be happy to sleeve this one up and take it to my next Commander night. I think it'll be fun to play and shouldn't make everyone sad just because it's Sharuum. (And lest anyone should ask, the only Sharuum shenanigans we're pulling is possibly recurring Executioner's Capsule. For six mana. Then eight, if it's our second casting. If that is too tough for your group, it's probably time for everyone to get an upgrade.)

Rather than try to "upgrade" this deck with cards I didn't have access to, I leave you instead with a question: does this pull off 75%? Will it win approximately 1 out of X games, where X is the number of players in the game? Will it pull off a win with some tight play and a little luck? Are we punishing rather than preventing? Please, weigh in! I look forward to your comments on this one quite a bit.

Thanks to my friend for the great gift - lots of wonderful goodies in there. To my dad for helping build the deck - it's better because he helped. And to Jason, for sharing his column - it's a great idea and it's worth it for all of us to try, even if it's not all the time.

Now get out there and try something different.