First appearing way back in Magic's first set - Alpha - Howling Mine has been a Staple of both fun tabletop and soulless competitive decks since.

Typically played alongside other artifacts and enchantments to help blunt the opponent's ability to exploit its card drawing symmetry, Howling Mine has been itself a kill card, a lock card, even a precursor to some kind of Storm Seeker. Howling Mine is great when the opponents devote lots of cards in their own decks to draw cards; and terrible when they just have cheap ones (or worse, cheap burn).

But rarely, if ever, has it been a very effective "fair" card. Successfully playing Howling Mine? You're probably running some kind of a Turbo Stasis. Maybe a metagamed Fog engine.

You can't really just run it straight up. The opponent will get too much out of it. If they were supposed to be manascrewed, it'll draw them into lands. If they're Blue, you're basically guaranteeing that they'll have the permission spell on the turn you need your plan to come together.

For nearly as long as there have been Howling Mines, mages have lusted for personal Howling Mines. One that works... But just for me.

More than once, the nice people in Rentom, WA have obliged! Only...

They print a good one - even a great one - once in a while. Only not for two.

At least not until now: 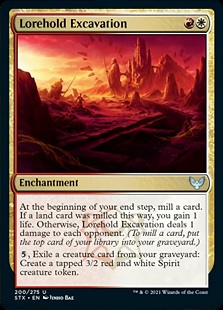 Are you soft, MichaelJ? You might be asking. Graveyard is NOT the same as hand!

Okay, okay! I hear you. Milling a card is not the same as drawing one: I agree. But never before have we really gotten close to a personal Howling Mine at two before this card.

Which is not to say that there haven't been ways to draw extra cards with two-mana artifacts and enchantments in the past. Only they don't do it for zero mana. The good ones - and certainly there have been good ones in the past - have been limited either in the number of cards they draw, or asked you to spend a ton of mana... Or both!

Lorehold Excavation does its thing for no mana at all. And by thing I mean "things".

At the beginning of your end step, mill a card.

First thing's first... Is this ability worth a card? The obvious answer is "no" ... But when trying to compare a card like this with the original Howling Mine it is important to note that neither is the opponent getting a card. I think it's also important to note that while not worth a full card, this milling ability is also not worth zero. More on that in a bit.

So, milling a card is not the same as drawing a card. But if we know that Lorehold Excavation is in our deck, we can theoretically make it feel that way.

Without leaving Red and White, there are plenty of great cards you might want to mill, to play in our deck. An Ox of Agonas, for example, is arguably stronger in the graveyard than it is in your hand!

If a land card was milled this way, you gain 1 life.

Now is this worth a card?

I actually don't think it's very good. Though, I can imagine having multiple copies of Lorehold Excavation in play. Triggering this life gain sentence two or more times in a turn might be very frustrating for a beatdown opponent! But generally speaking, this second sentence is close, in the abstract, to a non-ability. It's not very fast when you need life gain, and mostly irrelevant for the matchups where you actually want Lorehold Excavation, in fact.

Caveat: If the opponent is trying to kill you with a very low power offense (e.g. 1/1 tokens, or their own Lorehold Excavation), gaining 1 life for milling a land, over multiple turns, will probably add many turns to their clock.

That said, it is not difficult to imagine a situation where you might actually want lands in your graveyard. While not currently legal in Standard, prospective wingmen like Crucible of Worlds, Ramunap Excavator, or Life from the Loam have all been Staple or more; easily could be again.

Ha ha! Now is this worth a card?

But it's actually not that far off. The Philosophy of Fire was predicated on the idea that two damage on one card was a good place to start. The average Lorehold Excavation deck is going to break even on two damage three turns in... But this card obviously does nothing when it first comes down. At least not most of the time.

This brings us to an ultimate point: If Lorehold Excavation is going to be good, it's likely going to be good in games where you keep untapping, and keep getting an advantage from it, turn after turn. If Lorehold Excavation were aspiring to be a Planeswalker, it would want to be a Jace, the Mind Sculptor; not a Lukka, Coppercoat Outcast. Milling a card might not be worth a card; and gaining 1 life surely isn't (at least not one time). Zero offensive points isn't worth a card (or the two mana you put into this)... But given sufficient time, one offensive point at a time can win the whole game! Lorehold Excavation could actually echo the lethal Howling Mines of the past; the ones that killed because the opponent drew the first extra card, or because their owners hid behind an Island Sanctuary.

So, off the top of my head, I can think of two very good places to try this new Strixhaven tool:

As a sideboard card against control? You ask. What, are you soft?

Let's look at how this card might line up.

Lucky Clover was a card that recently got banned in Standard. Like Lorehold Excavation, Lucky Clover didn't do anything directly or immediately on its own; but could generate an advantage given time and with the right teammates. Unlike its constant companion, Edgewall Innkeeper, Lucky Clover was not a tiny 1/1 creature. Ergo it required specific types of interaction to be dealt with. Ergo, unlike Edgewall Innkeeper, it was banned.

So how do control decks tend to interact with cards like this? I suppose they can Disenchant it. But unless they Disenchant it immediately, it will get a little extra against a 1:1. And such advantages can add up. Disenchanting it can be fine, but it might also leave the opponent a little behind.

What if they don't Disenchant it? If recent history has told us anything, they're more likely to play something like an Oblivion Ring. In other eras that might be the same as destroying your Lorehold Excavation, but in this case you have other things at

in Strixhaven that are going to make that an inconsistent way of interacting, at best. 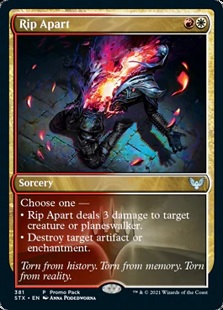 And you thought Abrade was flexible.

So, against Control you can have a nice, slow, burn; you can get at them with Escape threats. You can do so slipping under their permission wall, and with a permanent type that doesn't jump into the graveyard with all its friends when a sweeper comes around. Rather, you have a tool that can help overload a narrow band of defense. All very cheaply.

5, Exile a creature card from your graveyard: Create a tapped 3/2 red and white Spirit creature token.

Now is THIS worth a card?

Yes. Given enough time, that is worth a card. Not a great one, maybe; but flashy and free. Instant speed, un-counter-able, and not out of your hand. So...

Way more than a card at some point.

I love how this last ability can allow you to completely play around a control opponent's sorcery speed removal. See? I told you it could be good against control! If you have seven - or even twelve - lands in play already, Lorehold Excavation can potentially get money before milling a single time! Don't count on this happening too often, but in a long battle of attrition, it can be a sledgehammer of a topdeck. Not bad for two.

Important to note: The "fuel" creature you use to make the 3/2 Spirit token doesn't have to get into your graveyard via the mill on Lorehold Excavation. You can cycle it. You can play normally and block with it. They can make you discard it. Doesn't matter. While not fast, this last bit is all on the bonus.

So, is Lorehold Excavation the elusive personal Howling Mine on two? Even in the properly built deck, I put it on maybe 63% of the way there. Luckily, 51% would have been enough to give it a try.