I have a preview from the upcoming Viz Media/Wizards book, The Art of Magic: the Gathering Innistrad and I have to share it right away:

So, what does this tell us?

It doesnât come out for another month!

Well, it confirms Gavony Townshipâs art is unreal incredible. I wrote on Fachwerk buildings not long ago, the buildings with German cross beams and stucco between them. That style grounds us in reality and introduces the idea that Innistrad is based around humans. The human perspective is shown with the two-page spread, thatâs why itâs so horizontal, and this confirmation will give us larger artworks of iconic Innistrad buildings. Okâ.â.â.âthatâs coolâ.â.â.âbut letâs go deeper. 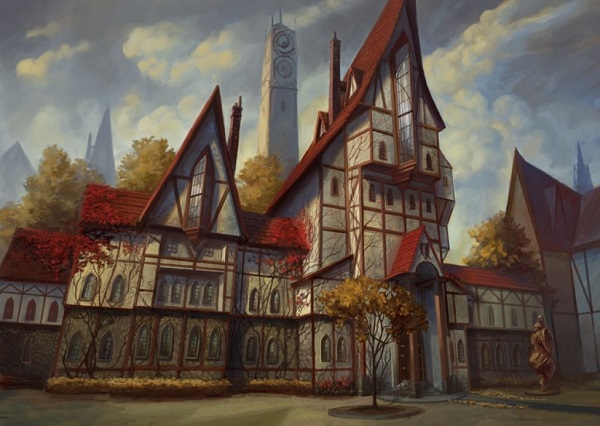 AHHH! EVERYTHING IS OUTSIDE

I wrote in my Shadows Over Innistrad Art Review that Innistrad is not just not dread anymore. Now, it is also rife with panic and paranoia. The original block saw Humans endangered by Avacynâs extended imprisonment in the Helvault. That manifested in Dark Ascension, which was nearly the end of Humans on Innistrad. Avacyn Restored shifted the plane back to stability, and the curtain closed.

In Shadows Over Innistrad, Humans are again being hunted, but this time Avacyn herself is the one hunting them. One of the first stories of the set and the Hanweir Chronicle blog kicked the set off on this note. Panic and paranoia manifest in taller walls and defenses from the ground and air. With Avacyn now exiled by Sorin himself, prayers that werenât answered by a homicidal Angel leave us begging to know whatâs in store in the next set. As examples, Iâll bring two cards to show you:

-When prayers were heard, the Elder of Laurels could protect the many with the power of one. They kept the evil at bay.

-When faith failed, Cathars became veterans and ignoring prayers for sword and steel became the norm.

Read the flavor text for both and youâll see the eroding of faith. They lost their religion, and, again, humans are the focus. They try to understand and protect their existence.

The more troubling thing we learn from this snippet of the Innistrad art book is the confirmation that the wealthy have the means to be safe. This appears to be a gag.

Jeremy Jarvis called them âgags,â or visual cues left in a set to look for.

Going back to Innistrad visually, if you have tall walls and guards, why pray when angels wonât come anyway? When youâre poor and up against a wall, thatâs all you have â your faith. We had a preview of this issue with Geist Snatch, where other creatures will hear you and this was when Avacyn was supposed to have been at full power protecting the plane!

By reverse engineering, from Fortified Village, Howlpack Resurgence shows you how terrible it is to live in rural Kessig. You have no safety, and every time you hear something outside, it is there to end you. Take that image and juxtapose it with the line on the nightâs terrors in the excerpt I was provided. 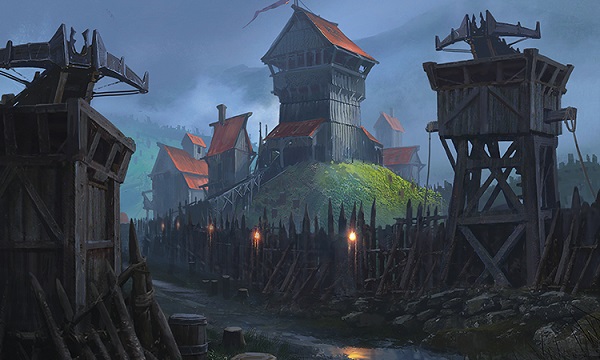 I mentioned the previous iterations of Innistrad, and two more images really show you the difference the excerpt is trying to show. In two paragraphs, we are given a tremendous amount of information which shows just how much the human perspective matters and what having your religion erode around you does for daily safety, security, and your work ethic.

All parts of Shadows Over Innistrad and, really, where Innistrad is now, was examined and planned out. Look at the windows below. Notice any differences?

Glass is expensive but security is more expensive.

The rich donât need giant windows, they can afford candles.

In medieval towns, the scribes who needed extra time at night to work were the monks, the clerics from the church. Keeping them safe was and is expensive. A Wizards creative team member wrote the art descriptions for safety and security to ooze through the set but not become clear until itâs called out to you. Thatâs brilliant world building and once you see it, it canât be unseen. You want to build a Dungeons and Dragons world on Innistrad? Awesome, your style guide to the plane is coming in about a month and they explain not only the major themes like âhuman perspectiveâ but also what that means to daily life. That is invaluable background information for any Dungeon Master, or even an artist trying to flesh out their world to a granular level. You can then take the two paragraphs I received and extrapolate to the concept art posted online.

Kessig is unsafe and overrun, as Jung Parkâs concept art shows us and Howlpack Resurgence confirms.

Gavony is safe because of city walls and wealth, as the cards also show.

Innistrad is my favorite set and I have already preordered an art book (really a style guide as Iâve explained before) which is what I suggest you do as well. Itâs a campaign setting without the rules. Itâs a full explanation of how to build a world by showing you all aspects of a failing faith, how humans react to calamity and change, and itâs a strong commentary on modern society. When threatened, we heighten security, often limiting freedoms, and, in Innistradâs case, inquisitions occur when safety from within is challenged.

Since most every threat on Innistrad is human made, the greatest fear is other humans, not a Jund dragon or a vengeful Theros god. The book tells how that filters down to even daily life, and, if weâre lucky, weâll read and see Nahiri's Machinations reflected in Eldritch Moonâs art, which comes out a little over a week after this art book drops in stores. The editor, Joel, tweeted a picture and I cannot wait to have it in my hand!

The Art of Magic: the Gathering Innistrad comes out July 5, 2016 and you can preorder it now! Thanks to Wizards of the Coast for giving me a sneak peak I could share with you. If you liked hearing about it early from me, send me and Wizards a tweet on it!