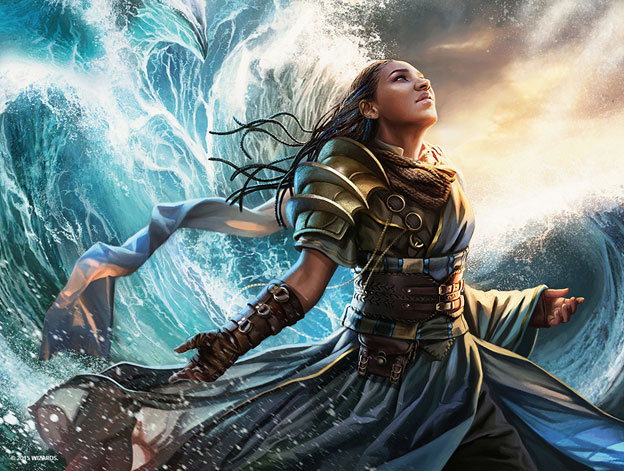 I first was turned on to Magali Villeneuve through Commander (2013 Edition)âs Order of Succession, which I named, and Iâd started lusting after that art the second I laid eyes on it. There was a particular depth to the expression of the woman (the one doing the chokingâthe choker, not the chokee) that Iâd not often seen in Magic. Next came Titania, Protector of Argoth. An illustration of unusual elegance and such understatedly articulated sexiness it was impossible not to love.

Then, Narset Transcendent dropped, and the rest is history. Boom. Instant classic. Not only was an Asian woman Planeswalker suddenly a real thing, itâs totally OP art: strong without being harsh, sensual yet barely showing any skin, packed to the edges of the frame with flavor that only highlighted the enigmatic, conflicted, deeply passionate, and introspective nature of the Narset we now know and loveâsimply an iconic image of what modern fantasy illustration can (and should) push itself to be.

Hordes of MTG fans and I, of course, fell hard for Magali in that moment, and here we are. With an easily recognizable style that sparkles right off the cards, Magaliâs high-impact images have had a lot of reachâpackaging, play mats, Uncharted Realms, Duels. Itâs hard to believe that Magali has only done twenty-three or so cards so far, including a Monk token and a promo. 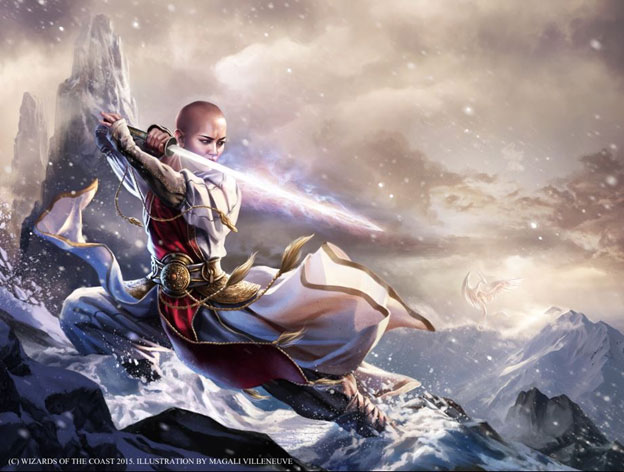 So weâll stop talking about Narset hereâ.â.â.âbecause itâs receiving its own article, next week, when I debut my cosplay of itânot like you need more motivation to read through this, but there is a sneak peek pic at the end of this article.

What impresses me most about Magali is her frank elegance, warm spirit toward fans, and generosity in supporting cosplayers. I think sheâs a real asset to the Magic community, and I hope to see her work in the game for years to come. 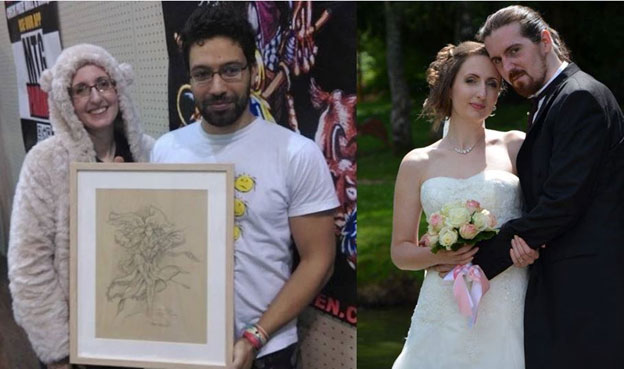 Two sides of Magali: fuzzy-eared with the new owner of the Narset Transcendent original sketch (left), and regal with partner-in-crime and fellow illustrator Alexandre Dainche (right).

Magaliâs strength is undoubtedly portraits, so Wizards of the Coast, please, please keep giving her opportunities to paint epic hero shots. I especially enjoy her women, but that doesnât mean sheâs not adept at men, tooâher promo Honored Hierarch is easily one of the best faces in MTG. Ever.

Magali took the time to answer some of my serious and not-so-serious questions. Read on to hear about pizza with George R.R. Martin, her Lannister persuasion, and which Planeswalkerâs powers she covets! 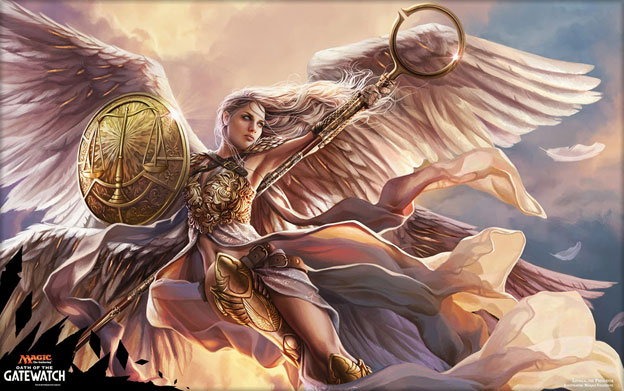 Linvala, the Preserver by Magali Villeneuve

1. You seem to be very busy, very much in demand. With your high output, do you have any tricks you use to keep yourself inspired in your work?

The truth is it's not always easy to keep on coming up with cool and new things when you have to create like ten or fifteen illustrations a month. At some point in my career, I even had to produce up to twenty per month. It was exhausting, and I humbly admit I really wasn't always on top of my game and that I try to keep some illustrations carefully hidden from the worldâ.â.â.â

But through the years, I found out my main motivation was to remain aware of how lucky I was. 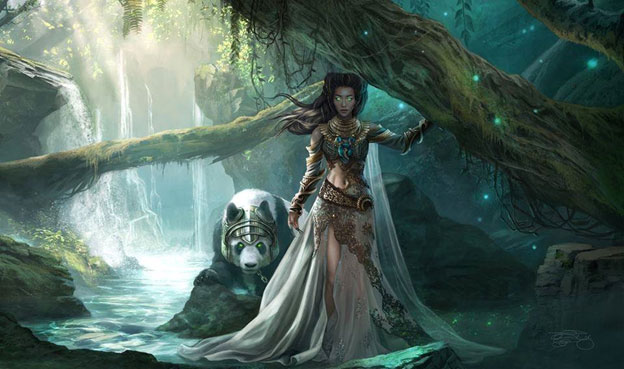 Not all artists can work so much and for so long in wonderful universes such as Lord of the Rings, Star Wars, A Game of Thrones, Magicâ.â.â.âBefore I started as a pro, I didn't even dare to imagine I would be given such opportunities. Even today, I still feel incredulous more often than not. As a consequence, whenever I receive new assignments, it still is the very same exhilaration as the first time. This is what keeps me inspired.

And it happened again as recently as two days ago when I got my new MTG commissions.

I read what I'm gonna have to do, I usually say, "So cool!" and then inspiration comes by itself. I'm lucky enough to love each one of the universes I get to work on. This makes things easier, indeed. 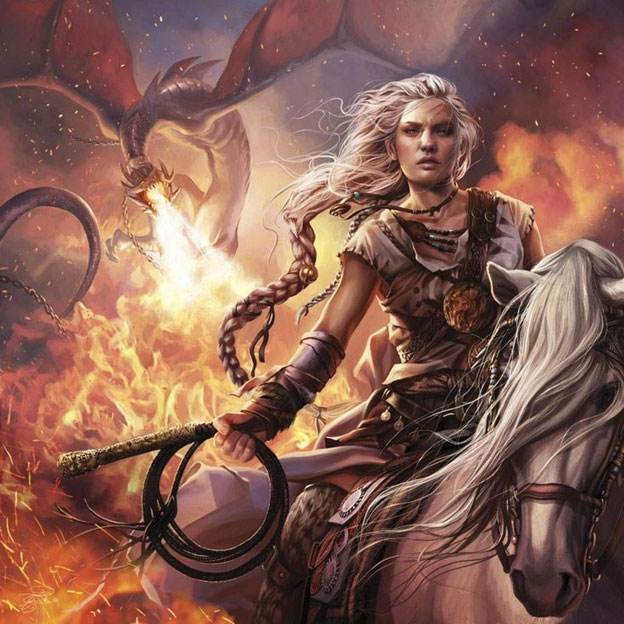 âIâm on a horse.â And, sheâs got dragons, so we suggest you get out of her damn way. Daenerys Targaryen by Magali Villeneuve.

2. You've illustrated some of fandom's most iconic women: Daenerys, Galadriel and Arwen, Leiaâ.â.â.âWhat does this feel like for you? Is there anything you still aspire to as far as professional goals?

That's something I'm very proud of. I love painting women, and these women in particular, are so well-known and loved by people. They are beautiful, strong heroines and very inspiring. I always take it as a real proof of trust to be commissioned such characters. And I'm thankful for my portrayal skills, cause believe me, they can be highly needed, especially when working on Star Wars! 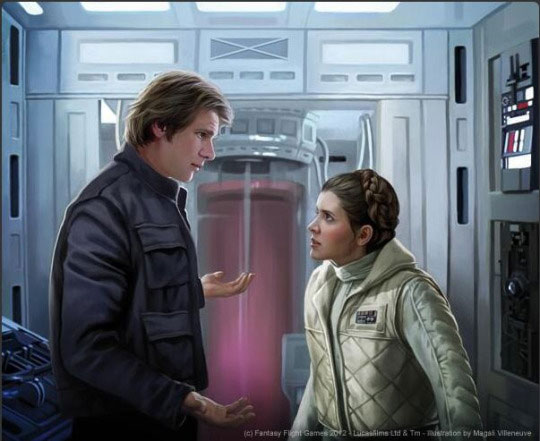 As for the second part of your question, I don't know if it could get any betterâ.â.â.âI think my main professional goal would be that things remain as they areâdoing cool stuff and working with great people, because that matters a lot, too! I do not ask for more. I do not even ask for my name to be more popular in the field, or to have thousands of likes or followers, or whatever. I want my clients to be happy with me, to keep their trust, and please people with pretty images. In our job, the "product" counts so much more than the one who makes it. So if I succeeded in doing that, it would be perfect! 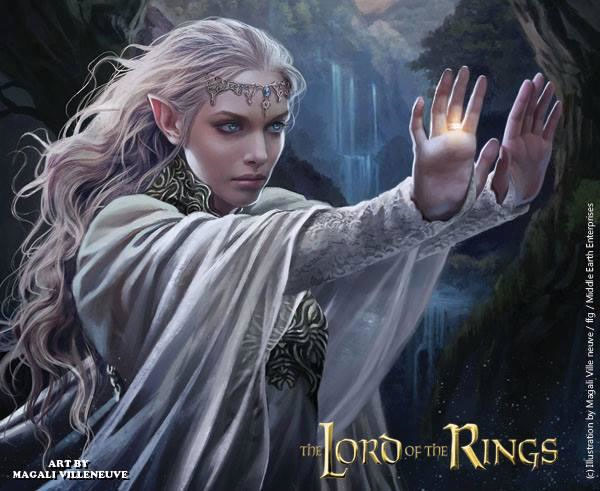 3. Speaking of iconic women, what is your opinion of the current state of how women are portrayed in fantasy and sci-fi and how it hasâor hasn'tâchanged over the years?

Though I cannot say it is intentional militancy, to me it's still very important nowadays to be careful about depicting sci-fi/fantasy women in a modern, evolved way.

There wasâand there still isâa tendency to illustrate female characters in a way that mixes up beauty with over-sexualization and strength with aggressiveness. It's okay to show some skin, for example, as long as it remains elegant, dignified, rational, and justified.

Galadriel or Narset are great examples. They were wonderful means for me to try to show one can be a beautiful, believable heroine and still be dressed up to the chin.

I am not prudish, but I am totally against caricatures. And sci-fi/fantasy illustration being for a good part a "menâs world,â the fact is some of them still have a rather stereotyped approach. I know some didn't like it when I said that in an interview the last time, but I'll probably stop when I don't see anatomies defying gravity anymore, improbable armors for female warriors, and so on.

Mark my words: It's not about feminism. I'm just as sick and tired of overly muscular, barbarian-types of hero guys. I think it's time we'd go a step forward in human representation in sci-fi and fantasy. At least on a larger scale. 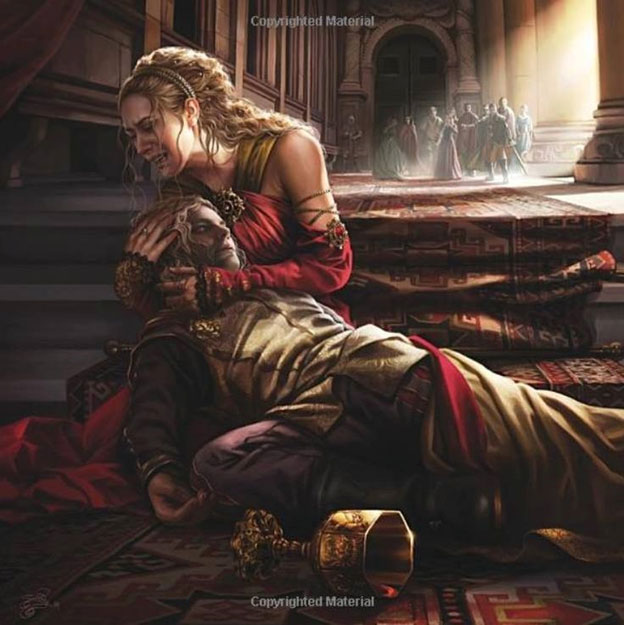 4. Would you share with us what your personal favorite recent illustrations are and why they mean something special to you?

The first that comes to my mind is the one showing Cersei and Joffrey in my "A Song of Ice and Fire" 2016 calendar. It's special to me because it allowed me to do something we cannot always do in the everyday job: that is, showing a very dark, intensely tragic moment. I could work on very specific expressions and poses, and hint at my love for Caravaggisti paintersâwith only my humble skills, of course. 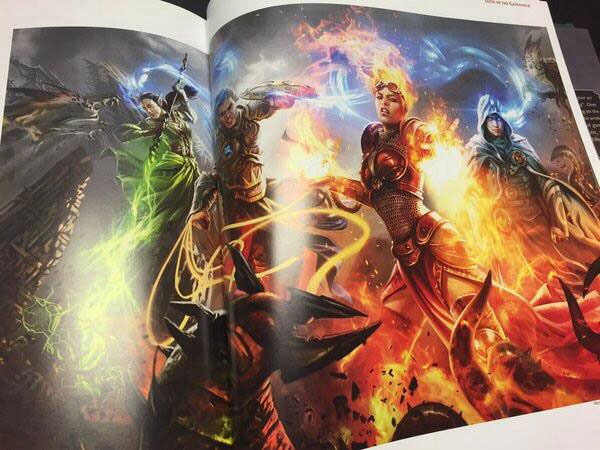 The Gatewatch in battle by Magali Villeneuve, found in The Art of Magic: the Gathering: Zendikar.

Another would be the one for MTG showing Chandra, Jace, Nissa, and Gideon fighting together against Eldrazi. My, the day I received this assignmentâ.â.â.âit was so much fun, and these four characters are so incredibly cool. But painting the four of them together? Utmost excitement! 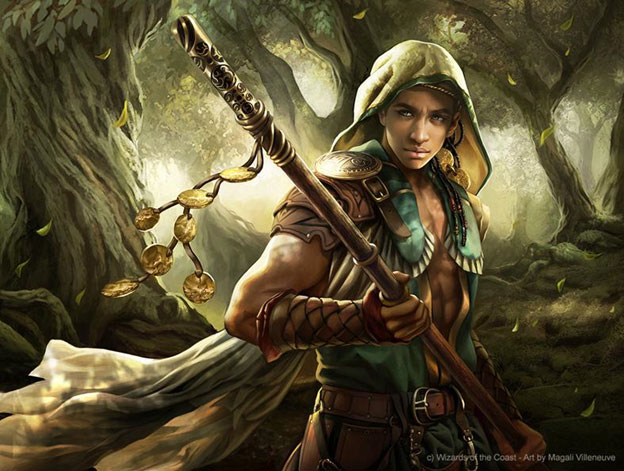 To describe it simply, to me, MTG work is the one that leaves the most freedom. It may sound like a paradox, as Magic's universe always has to be respected, and it's been around for quite some time. But once youâve "assimilated" what itâs all about, you can just have fun and be imaginative. Besides, as I had already gained a lot of experience as far as painting card games was concerned, I found it very easy to "blend into" the MTG illustrators team.

FFG works can be a bit trickier, especially when it comes to meeting the licensees' requirement. That's how I learned how important it was to work with references and to be careful about details. 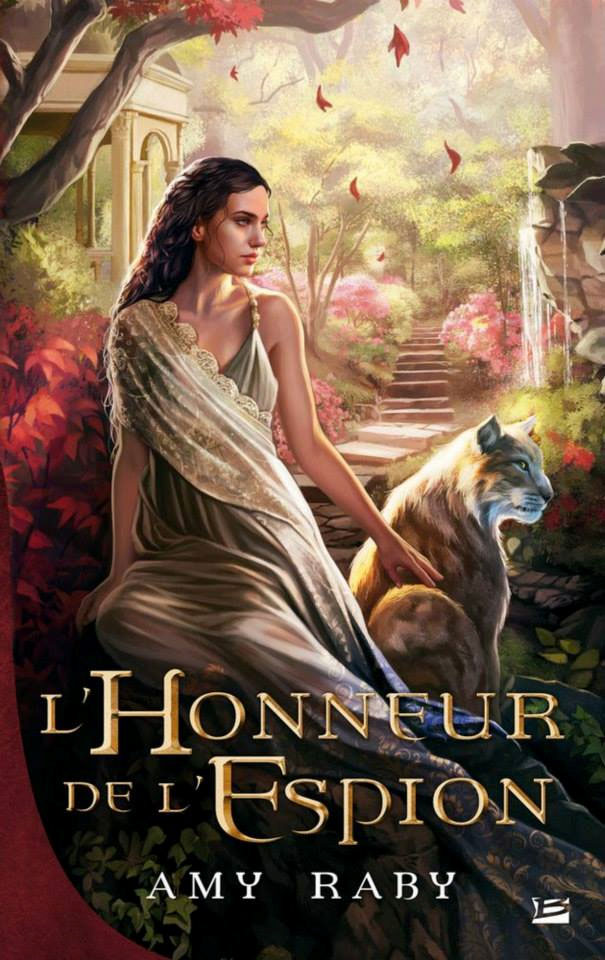 Book covers are something absolutely different. With card games, you have to pay attention to one thing in particular at a time, whether it be a spell you're painting, a hero, or a scene. When you're creating a book cover, the less specific it is, the better. A book cover has to express a general feeling of what you'll find in the text. Card games need to narrow your approach down to a very precise theme. 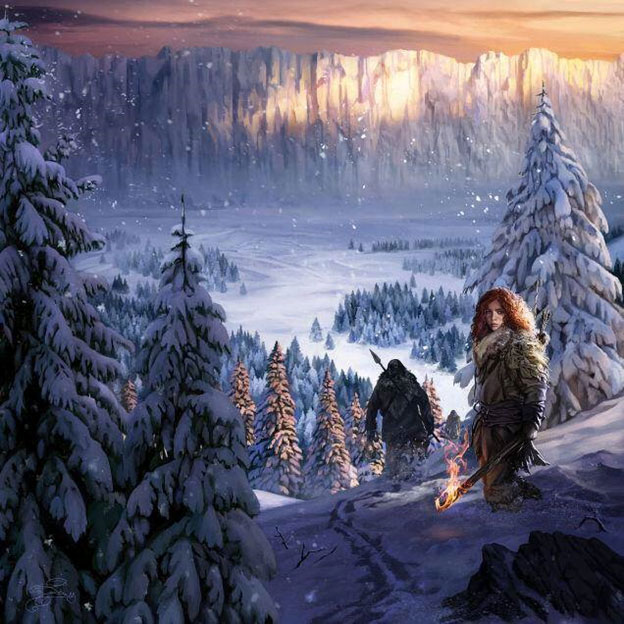 Ygritte and the Wall by Magali Villeneuve

As for the style, it's the universe that makes it change more than the medium. With Magic, you can use brighter colors, have fun with angles and composition, go a little crazy with lights. Other universes will ask for more sobriety, which is absolutely the case with A Game of Thrones, for example. Your brain does the switch naturally because we all have an overall impression of this or that universe's look in our visual memory. And I guess illustrators are quite used to working within the boundaries of different themes. 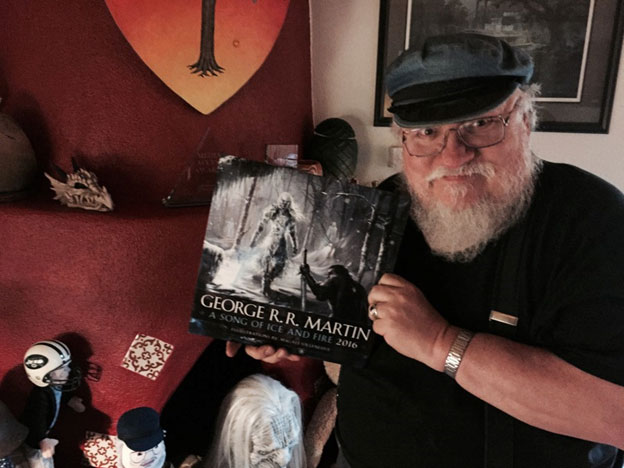 6. Have you met George R.R. Martin in person yet, and who's your favorite A Game of Thrones character?

Yes, I did meet George R.R. Martin in person, and I ate a pizza sitting right in front of himâwhich was a pure waste of pizza, as I was so impressed that I barely dared to move or breatheâ.â.â.âIt was right before I really started working on the calendar. That day was a crazy day, indeed.

If I had to choose one GoT character, I would pick amongst the Lannister family. Maybe Jaime. In his way, he's one of the most human, and I love his evolution throughout the story. A beautiful character, with lots of moral shades. 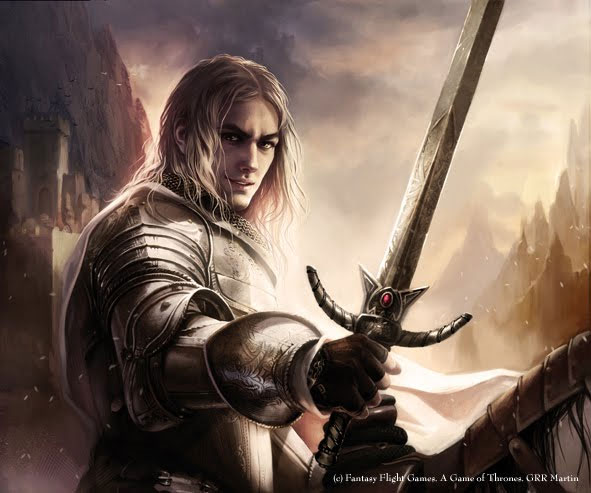 7. If you could choose one Planeswalker's set of powers to have as your own, whose would you choose, and why?

No hesitation: Jace's. I would have thousands of good ideas for how to use control on people's minds! And I'd like his outfit tooâ.â.â.â 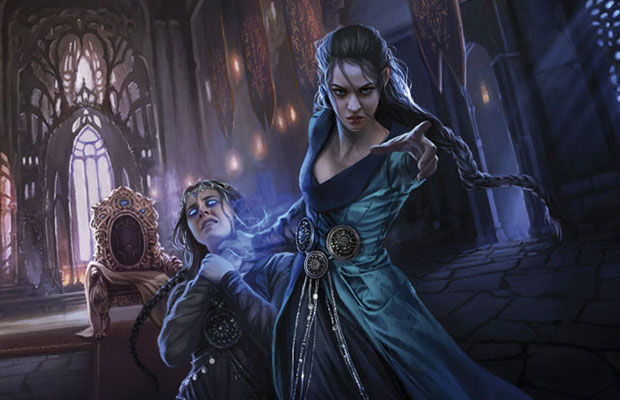 Order of Succession by Magali Villeneuve.

So. The artist is a blue mage! I think I feel vaguely threatened by this, in a good way. Order of Succession is basically how I envision a âMagali-Jaceâ mashup: Sheâll rip the thoughts from my mind, and the throne from my butt.

If I had to summarize the Magali Villeneuve âbrandââ.â.â.âintimately haunting moments with characters we canâtâand donât want toâforget. 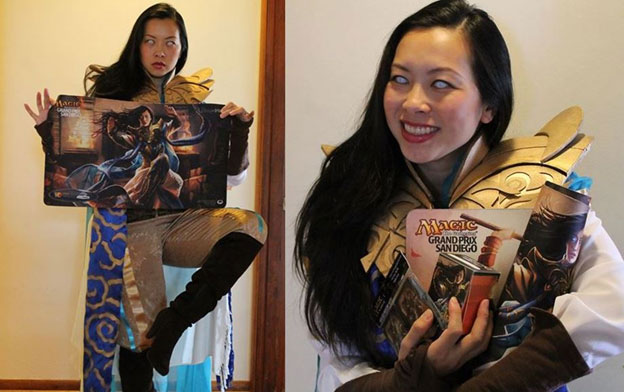 Remember to come back to Gathering Magic next week, when Iâll debut fully-blinged-out photos of my complete Narset Transcendent cosplay. Thereâll also be more Magali plus an original Magic fan fiction by Trevor Gulley, editor at CardConfidants.com (and co-conspirator of fellow editor and writer Renee Hupp). If you heart SarkhanXNarset, you wonât want to miss it.

I hope you enjoyed these seven questions with one of MTGâs most memorable talents! 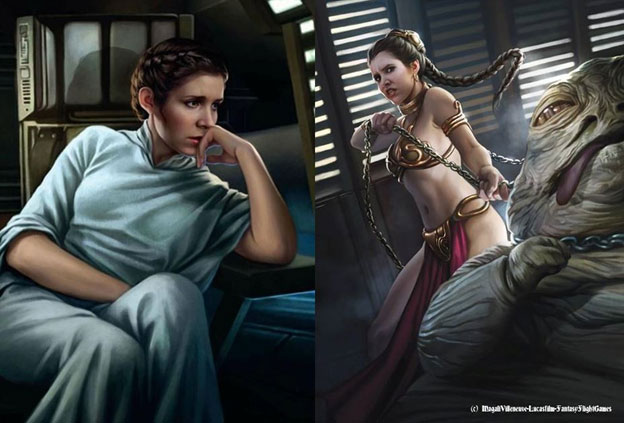 âJabba, sexual objectification of giant slugs may not be a problem, but for human womenâ.â.â.ââ Portraits of a lady: Magaliâs renderings of two of our favorite shades of Leia.

Till next time, may Magic be your fully operational, impractical-turned-TOTALLY PRACTICAL, DUDEâweaponized battle station of metal bikini slave armor.