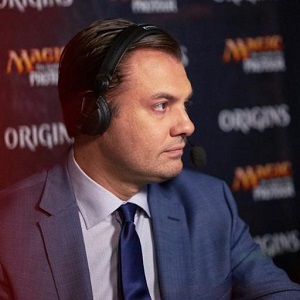 When did you first start playing MTG?

Just out of HS. 18-19 (1998). Only played for a year or two. Stopped, started in 2008. Didnât know the rules that well, didnât play in tournaments, played against one friend. I was a casual brewer, that was my thing. I had named them all some really embarrassing names (Ex: Ah hans run written on a deckbox). Realized that it was because I wasnât able to play against people regularly, so a lot of what was fun for me was taking the cards and exploring new ideas.

What drew you back to the game?

Some friends. âunwittingly.â I started playing poker semi-professionally. In the middle of poker boom. I was playing in a couple of weekly games, one was at a game studio that was designing a game with poker in it. They played the game so that the game would be more realistic. These guys were Magic players. One got a BUNCH of cards and organized the league to play sealed deck. Ryan Spain was one of the people there, friend and mentor â Jeh taught me to play, and we taught Ryan, his cousin â who said that I should try. The card that captured his attention was Mijae Djinn and the coin flips. He told me I should play, I told him no. âI felt like I had been there and done that.â The way I had felt about it was the way I used to play it. He pestered me to play it. I played one game â I faced down a Jace Beleren (Planeswalkers were brand new) and thought what the hell was that, thought the game had completely changed when I was absent. I didnât have a great sense for gaming. Important lesson â didnât know the lingo â opponent said swing and I had no clue. I was appalled that someone would assume that I knew what swing meant, and from then on tried to make it accommodating. It (the game) bit me. I would start asking Ryan questions and we would have long conversations

What gave you the idea to start doing content?

Funny one. 2009, I had continued to play, MTGO was the best way for me to play and learn. After the asking questions, asked, âWhy donât you work at Wizards?â (passionate, heâs a game designer). He had such a deep knowledge of the game. As the conversations continued, I pushed him to find a way to get him working at WOTC. Tom Lapille wrote that he felt he had a real leg up when he did Cube content before his interview, if he had never written his column, they wouldnât know who he was. PureMTGO put up a column of his âWaiting for Godotâ that immediately became popular. I had been listening to Leo Leport, an early pioneer of podcasting, who said that it was amazing that people could create their own content, rather than needing to get approval. Get a computer and a microphone and have your own radio show. âYou and I always talk about this stuff anyway, why donât we do a radio show?â The worlds happiness level would go up if we put this out. I took the reins on editing and stuff. Iâm a geek and I like to do computer stuff, liked the challenge of figuring out how to do all of this. Recorded all the first shows on my laptop, which felt sophisticated at the time. Now the computers keep up much better. The whole idea was that Ryan was teaching me, the listener.

What was your biggest challenge you faced getting started?

Getting it going. Now podcasts are ubiquitous, but info was sparse back then. Podcasts exist on a server, update on an RSS feed, rather than a website. Will show up on itunes and stuff. Can download to computers and stuff too. There was no one resource.

The thing Ryan and I took the most seriously was the consistency of the show. Wanted the show to come out consistently. Other MTG podcasts werenât really high-effort at the time, no focus. There were a couple that came out consistently and they had a decent following. Can do a lot by being consistent. Molded the show about being as consistent as possible. For example, did the show over Skype rather than in person in order to prevent the issues that may arise by having to travel and meet up. We were trying to build an audience.

Take me through a typical week for Marshall Sutcliffe (or a particularly exciting one. Up to you)

Usually do some type of show prep with Luis before the show. The podcast is an important part of my week, because we have high standards. I do clerical stuff too â question of the week, giveaways.

Sometimes I will write an article for Mothership.

Tuesday, Thursday â will record CFB videos. Have to manage the business end â independent contractor, Iâm my own boss, taxes etc. Around half of the weeks I am flying on Friday. Thursday I get ready to fly to do coverage for GPs and PTs and extra tournaments like Community Cup and so on. Will show up and then become a commentator â airplanes, hotels, etc. Weekends can be difficult.

Monday after travel will rest up because of travel and work all weekend.

I draft whenever thereâs a gap, just for me.

What would you change about your current lifestyle, if anything?

Big decision point â working corporate for AT&T, comfortable but I was bored, didnât really fit in well. 9-5 is tough for me, I stay up late, not a morning person, corporations move slowly, require keeping your head down and staying out of the way â Iâm not confrontational, but I like to try to affect change. Ended up quitting, which put me in a state of mind that was survivalist, because I knew that I wasnât going to be making as much money. I knew that I wanted to get back to where I was. I knew I needed to work. Took as many gigs as possible â coverage, articles, videos, doubled down on the podcast. At the time I was also playing poker, which was the glue that could make up for any shortfalls moneywise (playing poker like that was not that fun).

At this point I am now trying to balance. I still say yes to everything, and thereâs a point where that becomes not good. Lots of travelling â I hit the highest level of frequent flyer miles. It wears you down. I am REALLY concerned about burnout. Havenât experienced it, but want to keep enjoying it and not kill myself doing it. Tried to say no to a few things. When anything can change any moment.

How long can you see yourself doing what you do?

I donât know. Think about it all the time. Podcast â as long as people want to listen to it. Tied to my identity, co-host with people that I like. Itâs work â doing the show itself isnât work, but the crushing weight of having to create something every week is really heavy. The other stuff, I donât know. I see myself transitioning at some point to other things, because thatâs my nature, but not now. The travel and the people you meet. There arenât many people around day to day that I have a connection with, that think like I do. Day to day friends donât have the same mentality. I canât believe I am still doing it now.

What is your favorite part of living an Magic lifestyle?

I donât have to wake up early anymore.

Found that thereâs a relation to my happiness level when I am creating things, making things that didnât exist before, which I get to do all the time. Doing videos for the podcast, new article series, new Youtube channels.

Freedom of getting to pick what I do, kind of an illusion. Iâm my own boss, but I am not a nice boss. Itâs nice that itâs me and not someone else.

Creation is the big one.

Do you have any fun new things going on in 2017 you can share?

A couple that I am considering â Youtube channel separate from LR for general content, rather than just LR focused stuff. Current events, controversial topics, reviews, rather than just getting you better, doesnât fit on LR. I have opinions and donât get to share them on LR or coverage, and Twitter is a bad platform. Did some proof of concepts for the LR channel, and some were well-received. The hard part is that I am slow at videos, and they take 8 hours to do right now. Maybe worth getting a Youtube channel to put them.

Different type of podcast episode that I have been working on for the last 8 months â fully edited content versus conversational content. An example of fully edited content is NPR. VERY labor and time intensive. Iâm going to have at least one episode of it, because I have started doing the work for it. The exciting part for me is trying to get things made.

What would you consider to be your role in the Magic community?

Ambassador. When I first started doing coverage I was âthe baby.â Everyone else when I started was deeply entrenched in the game (15 years ago). When I got in the booth they would use terms (put myself back in my seat of when I was playing against that guy in the game studio). When I did make it I felt a strong responsibility that my product was accessible to people who were a little bit newer. Not necessarily people who are brand new, but what we can do is tone it down to the point where we can explain (for example âHeâs going to Time Walk her here.â) what we mean. The explanation means a lot to the people who had no idea what we meant. Trying to be the person who tries to make the game accessible and not forget about the relatively new players. Iâm trying to put myself in their shoes.

Back to that first podcast, and first game back, even as I have developed my own opinions as a player. Thereâs so much awesome to be had, donât want such a high barrier of entry.

Check out his Limited Information Column on DailyMTG 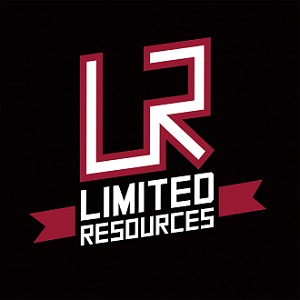